A Moment When Animals Started to Seem More Like People 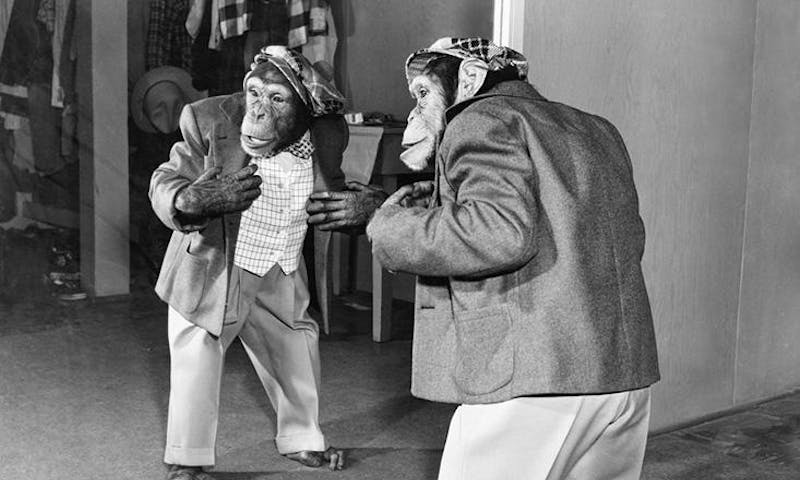 Any self-respecting
pet owner will confidently claim that their dog or cat (or rabbit, or
gerbil) seems sentient, exhibiting a distinct temperament and
emotional responses. I know my many beloved pets over the years could
feel pain, and fear, as well as love and trust. But are our pets
truly conscious creatures? Or are we merely projecting our own
thoughts and feelings onto our animal companions?

It likely depends
on what you mean by consciousness. On one end of the scale there is
basic wakefulness and sentient awareness—which we share with all
living creatures—and on the other, more sophisticated end there is
self-awareness. But there are many other systems and terms advanced
by various researchers to categorize and describe consciousness. Part
of the confusion stems from the great complexity, largely still
unknown, of how the brain gives rise to consciousness.

For a long time,
scientists assumed that having a neocortex (the outer, and more
recently evolved, part of mammals’ brains) was necessary to be
truly conscious in the human sense—not merely aware of one’s
surroundings (sentient) but also self-aware.
But there’s good news for animal lovers, because that view is
changing.

When we are just
over one year old, we can look into a mirror and recognize the
reflection as being “us,” and the brain maps that visual input,
tracking the changes in our size and appearance over the years. In
the 1970s, Gordon G. Gallup devised a mirror test, in which he marked
the face of an animal as it slept. Once it woke and saw its
reflection in a mirror, if the animal tried to wipe away the mark,
Gallup took this as evidence of a certain degree of self-awareness.
Animals that have passed the mirror test include chimpanzees,
orangutans, gorillas, dolphins (video),
and elephants, all of which possess a neocortex—and magpies, which
do not. So it turns out that a neocortex might not be essential after
all.

Recognizing that we
do share some basic neural structures and functions with many
animals, a number of prominent neuroscientists signed a public
statement in August 2012 to that effect during a conference on
animals and consciousness. The so-called Cambridge Declaration on
Consciousness [pdf;
YouTube
video] concluded
that, while not self-aware in the human sense, “non-human
animals”—including mammals and the octopus—possess sufficient
brain structure and function to generate conscious states. (One
signatory, Philip Low, has since become a vegan.) The Cambridge
declaration isn’t talking about advanced mega-cognition or
self-awareness; its focus is on what might be better termed
self-representation, or the ability to distinguish between self and
other.

But while the
declaration suggests progress in understanding animal consciousness,
the definitions and distinctions remain tricky. Consider C.
elegans. The humble nematode, or
roundworm, has a mere 302 neurons, barely sufficient to qualify as a
functioning brain, but part of one of those neurons is devoted to
distinguishing its own body from the world around it. In essence, C.
elegans has a “protoself”: It can
distinguish between its own movement and movement in its environment.

This does not mean
that the nematode could recognize itself in a worm-sized mirror, or
has a conscious sense of self on a par with human beings, although
it’s not like we can ask C. elegans
directly. How do we know the little creature doesn’t have a rich
interior life? Let’s just say this possibility seems unlikely,
given what we know about its neuroanatomy. It is the number of
neurons that matters most when it comes to the richness of
self-representation, and the nematode doesn’t have that many.

Neuroscientists
have not yet pinpointed the specific mechanisms behind how the brain
produces a distinct, persistent, subjective personal identity. That’s
a much tougher neuro-nut to crack. There is a fundamental layer we
seem to share with animals, onto which human beings add a second,
richer layer of self representation. That extra layer of
meta-cognition might just be what separates animal and human
consciousness.

Or not. Thomas
Nagel famously opined that we could never really know what it’s
like to be a bat, for instance, regardless of what we can observe
about its behavior and the structure of its brain. Maybe C.
elegans is more sentient than we
think, philosophizing about whether or not those giant humans exhibit
consciousness—when it’s not getting down with its bad self, doing
the Harlem Shake.