The Earth-Shaping Animal Migration No One Ever Sees

A closer look at one of nature’s hidden wonders. 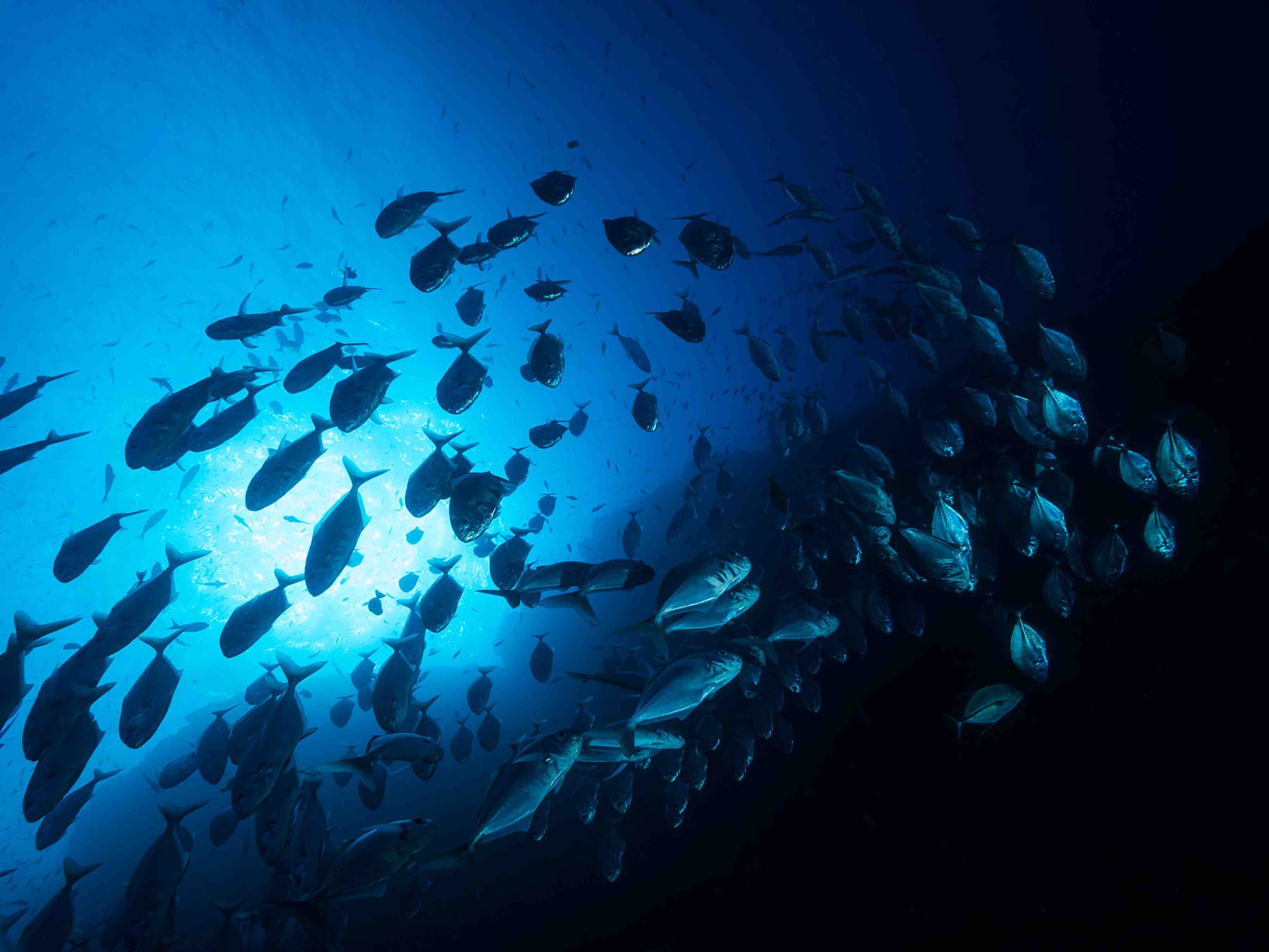 Each night, as the sun goes down behind the horizon, a tidal wave of life rises up out of the deep ocean—everything from crustaceans smaller than a grain of rice to see-through jellies, blood-red squid, and gigantic, boiling schools of glow-in-the-dark lanternfish.

They’re cold. They’re ravenous for surface-living plankton. And they’re on a tight schedule. For as soon as the sun returns, all these creatures must once again descend back to the black, lest they get gobbled up by the hungry mouths that patrol the ocean’s surface in the light of day.

This dance between light and dark, warm and cold, and predator and prey is called diel vertical migration (pronounced dial). It’s believed to be the largest movement of animal mass on earth. Of wildebeest on the Serengeti, the migrating monarchs of North America, and penguins marching across Antarctica, none can hold a soggy candle to the daily, global, synchronized swell of marine life known by the shorthand DVM.

Of course, most of us know bupkis about the whole thing, despite the fact that DVM plays a massive role in sequestering carbon in the deep sea, as well as in fattening up the fish we feed upon.

“If you can think of an open ocean animal, there’s a pretty good chance that it goes through some form of vertical migration,” says Rebecca Helm, a marine biologist at the University of North Carolina Asheville.

Though the specifics of DVM can be complicated and variable by species or location—a copepod may travel just a few feet, while a gelatinous salp might migrate nearly half a mile—the basis for the migration seems to be pretty simple. It’s mostly about sunlight and food.

All day long, the sun’s rays charge up teeny, tiny algae called phytoplankton in the ocean’s uppermost layer. Though these organisms are small, they are legion, making up the very foundation of the food web by nourishing millimeter-long crab larvae, whale sharks the size of a caboose, and innumerable life-forms in between. The thing is, to perform their life-sustaining photosynthesis, phytoplankton have to stay up in the first 650 feet or so of the ocean’s surface, since that’s as far as sunlight can penetrate.

“If you think about the whole depth of the ocean, that layer where photosynthesis can occur is like the skin on an apple. It’s so thin,” says Helm. “And so in order for organisms to take advantage of this really productive region of the ocean, they have to migrate up to it and collect all of that food.”

It’s tough to grasp just how many animals are involved in this daily migration, but here’s one way to think about it. When scientists first began experimenting with underwater sonar as a way to detect German U-boats during World War II, naval echosounders kept showing a solid layer some 400 to 600 feet below the surface. At first, the scientists reasoned that the sonar had detected the ocean’s bottom.

But there was a problem. The seabed kept moving, reading as shallower at night and deeper during the day. In time, the scientists discovered that they were looking at a “false bottom” composed of colossal, tightly-packed schools of shrimp, squid, and siphonophores.

What’s more, this collection of life was found to be so regular and predictable, it would eventually earn its own name within the sonar community—the deep-scattering layer, or a horizontal zone of living things so dense, it scatters or reflects sound waves. It’s so thick, there’s still some debate about whether enemy subs might be able to cloak themselves inside of it.

“So much of this science was kind of driven by these military personnel being like, ‘We’ve got to figure out what the heck is going on out there!’” says Helm. “You know, if we’re going to be engaging in subsurface warfare, we don’t really understand what this weird mystery layer is.’”

Of course, scientists have learned a great deal about the ocean since WWII, and every new finding paints an ever more complex picture. For instance, while DVM is mostly a biological phenomenon, it’s also influenced by physics.

The depth at which phytoplankton can still undergo photosynthesis is determined by things like water clarity, says Philip Hosegood, a physical oceanographer at the University of Plymouth in the United Kingdom. And water clarity is the result of a whole host of other variables, such as water temperature, wind speeds, tides, currents, salinity, and light.

“The ocean is a three-dimensional place,” says Hosegood. “But really, of course, it’s four-dimensional, because instead of just changing horizontally and vertically, it also changes in time.”

The lengths to which extra-tiny organisms go to make this migration is also made more impressive with a little knowledge of fluid dynamics. Otters, octopuses, and even humans can glide through water with relatively little resistance, but as a creature gets smaller, the more difficult it becomes for it to overcome water’s natural stickiness. (This is why an ant can become stuck on the water’s surface, while you or I simply step out of the pool, and it’s all thanks to something called the Reynolds number, which you can read more about here.) For speck-sized zooplankton, swimming through water would be like a person trying to paddle through molasses—yet these creatures slog their way through hundreds of feet of pudding-like-water twice a day!

Despite the fact that some version of DVM happens everywhere plankton grows, mysteries abound. For instance, many animals perform reverse DVM where they migrate to the sunny areas during the day and away from the surface at night. And there’s even variation within a species depending on location.

“Reef manta rays can undergo the normal diel vertical migration, so deeper during the day and shallower at night, in some places like the Chagos Archipelago,” says Sammy Andrzejaczek, a shark scientist at Stanford University and lead author of a 2019 review on vertical movements in large fishes. “But in some areas they are recorded doing the reverse behavior, like in the Red Sea and the Seychelles.”

Andrzejaczek is also part of a team studying how some shark species migrate horizontally to take advantage of DVM traffic, particularly tuna.  “Silky sharks seem to stay around seamounts during the day, and then they head off at night to feed,” says David Curnick, a marine biologist at the Zoological Society of London, and Andrzejaczek’s colleague.

This means that not only are animals migrating up and down, but also laterally, from areas of relative safety to areas of productivity. Perhaps most interesting of all, what happens in this apple-skin-thin surface zone has ramifications for both the world above and below.

What happens in this apple-skin-thin surface zone has ramifications for both the world above and below.

When all those tiny phytoplankton undergo photosynthesis at the surface, they consume carbon dioxide, says Helm. And then when they are eaten, that carbon is dragged back down below.

In fact, when scientists created a model in 2019 to determine just how much carbon DVM is responsible for depositing in the deep sea, they learned that all those squid, fish larvae, and baby shrimp push around 1 PgC—1 petagram of carbon, equal to 1 billion metric tons—into the depths each year.

“All the vehicles on the road in the United States produce around 1.5 PgC per year,” says Kevin Archibald, a biological oceanographer at Woods Hole Oceanographic Institution and lead author of that study. DVM could be understood as offsetting about two-thirds of all U.S. automobile emissions.

DVM only accounts for about 16 percent of the carbon captured by the ocean, says Archibald. Other contributors include natural water movements, sinking phytoplankton cells, and plain old poop, which at oceanic scales is a vast phenomenon indeed—and of course one supported by DVM’s bounty. DVM also accelerates the rate at which digested nutrients travel. Some research suggests DVM shuttles nutrients downward at an order of magnitude faster than they could sink on their own, allowing them to reach the deep ocean rather than drifting interminably.

This means that creatures who have never seen the sun still depend on its processes up above. We’re not all that unlike them, actually. For though we live out our days far away from all of this action, the vertical flow of life puts food on our tables and plays a role in our rapidly changing climate.

That changing climate will affect DVM, though precisely how is still unknown. Warmer water temperatures may decrease DVM activity in already-balmy places, such as the tropics, while enabling even greater DVM action in cold climes, such as those at the poles. Much remains uncertain. What is certain is that we are beholden to DVM, even if scientists are still learning how it works and most of the rest of us just learned it exists.