14 Words for Horse: The Linguistics of Game of Thrones 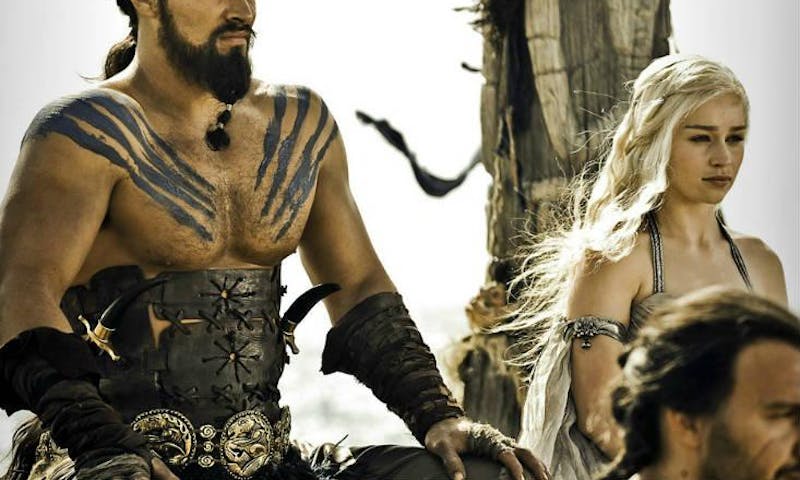 Seven hundred people gathered at the
University of California, San Diego, one day this spring to hear the
creators of three fictional languages talk about how linguistics has
infiltrated Hollywood, particularly when it comes to building
believable make-believe worlds. When it comes to building
make-believe worlds, inventing a language makes it seem that much
more real to the audience, fueling the willing suspension of
disbelief that lies at the heart of entertainment.

“The days of aliens spouting
gibberish with no grammatical structure are over,” University of
Southern California linguistics professor Paul Frommer told the New
York Times in 2011. Frommer invented the Na’Vi language spoken
by the tall blue native inhabitants of Pandora in Avatar, and
was on the San Diego panel, along with David J. Peterson, who
invented the Dothraki language for HBO’s smash hit series, Game
of Thrones, and Mark Okrand, who created the Klingon language for
Star Trek III: The Search for Spock.

People who create new languages as a
hobby—a very serious hobby—are called “conlangers.” The
oldest and most successful invented language is Esperanto, dating
back to 1887. It hasn’t yet ushered in world peace, as it was intended, but between 10,000 and two million people speak Esperanto
today, mostly concentrated in Europe, East Asia, and South America,
with as many as 1,000 native speakers who learned it from birth.
There is also a tradition of inventing languages in the science
fiction and fantasy realm. J.R.R. Tolkien invented an Elvish language
while writing The Lord of the Rings trilogy, and Disney’s
John Carter featured an invented Martian language called
Barsoomian.

Avatar director James Cameron
approached Frommer in 2005 about developing a language for the Na’Vi
inhabitants of Pandora, building on the 30 or so words he’d already
devised. They “had a vaguely Polynesian feel,” Frommer told me in
a recent interview, perhaps because Cameron had been in New Zealand
and his ear was attuned to Maori. So Frommer used that as a starting
point and drew on his familiarity with various other languages as
needed: Chinese, Persian, Gaelic, Malaysian, Indonesian, even the
Hebrew he learned as a child.

For instance, Na’Vi doesn’t have
the equivalent of the verb “to have.” If you want to say, “I
have a book” in Na’Vi, you would say, “There is to me a book.”
Frommer borrowed that particular structural element from Hebrew.
However, while there may be elements of other languages in Na’Vi,
the combination is unique.

Na’Vi now has 2,000 words in its
vocabulary; Klingon has 10,000 words, mostly focusing on spacecraft
and warfare, so it can be awkward for everyday conversations; most
languages have between 40,000 to 50,000 words. (English has as many
as half a million, if you take into account rarely used esoteric
vocabulary.) “It’s quite extraordinary what you can do with a
small vocabulary if you use language in creative ways,” he said.
“The question is, does the language serve the needs of the
speakers?

Frommer maintains a blog where he
occasionally posts new words for the Na’Vi speakers. But language
is not just about vocabulary; you also need grammatical
structure—syntax, morphology, phonology, phonetics—to build a
legitimate language. And every language is tied to an environment and
a culture. “If something is important to a culture, there will be
an efficient way of talking about that thing in the language,” said
Frommer. Peterson used a similar reasoning when inventing the
Dothraki vocabulary, which now has 10,000 words. The Dothraki have 14
different words for horse, for example, but no word for toilet or
cell phone. (He drew the grammatical structure partly from Swahili
and Estonian.)

Frommer doesn’t know if Na’Vi will
ever catch on to the same extent as Esperanto, or even Klingon, which
boasts a nonprofit Klingon Language Institute and a translation of
Shakespeare’s Hamlet. The Thhtmaa language spoken by the
termite aliens in Dark Skies never really caught fire; nor did
Disney’s Barsoomian. And Dothraki is still a bit too new, although
the enormous popularity of Game of Thrones bodes well for its
future.

At the moment, most people who study
Na’Vi are better at reading and writing the language, rather than
speaking it. But Frommer and others are doing their best to foster
more immersive learning environments. “You need comprehensible
input” to master a language, according to Frommer, able to both
hear the language and comprehend what is being said in the social
context. “You need to listen first, hear the language and absorb
some of the sounds before trying to speak it.” He is working on
developing listening exercises to help with that.

Ultimately, it’s the community that
makes it a living language. Some are drawn to Na’Vi because they
love the film and the fictional world of Pandora; “They can’t
visit Pandora, but they can learn the language,” said Frommer.
Others relish the intellectual challenge of learning the nuts and
bolts of an invented language. Regardless of motive, the biggest
appeal is being part of a broader community. “We are learning the
language together; it’s not just me.”