A Mirror of Our Best Selves

An astrobiologist annotates what we are seeing in this James Webb Space Telescope image. 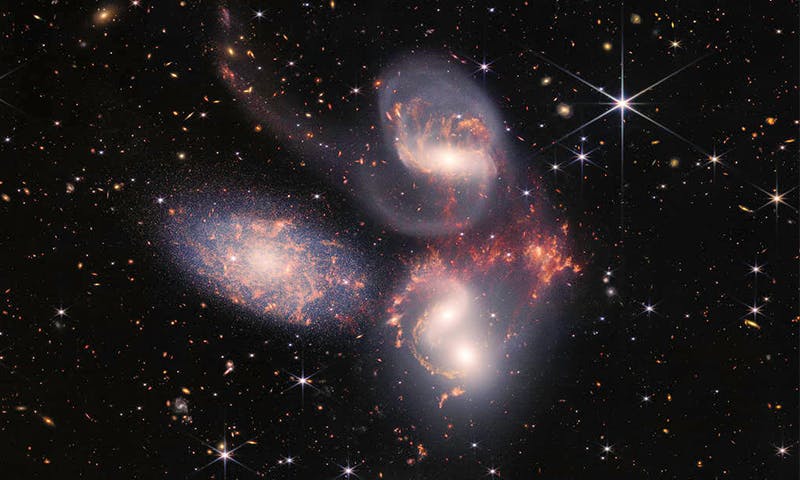 Occasionally our species manages to accomplish something that every single one of us (except perhaps for the most misanthropic curmudgeons) can enjoy as a sign that all hope is not lost, that we can still reach for the sublime. The James Webb Space Telescope is one of those accomplishments and allows us to peer into the universe and feel like we’re seeing reality for the first time. JWST’s first scientific images have included some of the deepest and most beautiful views of the cosmos, together with some stunning vistas of stellar birth and death, but for me it’s what is reflected in these views that perhaps matters the most. They are proof positive the universe gives rise to structures capable of turning around and staring back at the universe.

At first glance, JWST may not look like such a promising cosmic invention, with its awkward and angular umbrella that shades 18 gold-plated beryllium mirrors. The mirrors are arranged honeycomb-like into a 21-foot-wide telescopic aperture, forcibly chilled and tuned to capture the faintest breaths of infrared light and focus them into four boxy detectors and cameras. But it arguably took 4.5 billion years of Earth’s evolution and the emergence of one particularly fractious and obsessive species to enable this brief moment, where the complex beings of 15 countries could build a stunningly sophisticated new way for the universe to look at itself.

A standout among JWST’s first images is Stephan’s Quintet, a collection of galaxies first discovered in the constellation of Pegasus by Édouard Stephan in 1877. This flamboyant collection is the prototype of what is termed a “compact galaxy group,” a remarkably tight-knit ensemble where galaxy-on-galaxy collisions and gravitational interactions are writ large and presumed to lead to a transformative merger into a single giant galaxy; a cosmic expression of E pluribus unum, and a vital clue to how gas, stars, and heaps of dark matter grow and evolve on these colossal scales.

JWST’s images confirm how the rightmost four of these galaxies are bound together by gravity in a tight and vigorously interactive dance, where great streamers of billions of stars are being torn asunder, and huge bursts of star formation are being triggered as gas is disturbed. Ironically, these very interactions may be slowing the process of collapse toward a single giant galaxy, and for now Stephan’s Quintet balances on the cusp between that transformation and individuality. Like any good portrait there are nearly endless things to describe, but here are seven highlights that help us (and the universe) decode the scene.

(1) Odd one out: This galaxy (NGC 7320) is a mere 40 million light-years from Earth and a foreground interloper, whereas the others of the quintet are genuinely physically associated with each other and are 290 million light-years from our solar system. The exquisitely ruffled texture in JWST’s image of this more nearby galaxy comes from zones of star formation and heated dust as this galaxy experiences its own chapter of agitated evolution.

(2) Like sparkling ornaments, stars that are in our own Milky Way muscle their way into the foreground of the picture the way that trees in a forest do. Their spiky appearance is caused by the diffraction of light around the edges of JWST’s 18 hexagonal mirror segments, and is a unique signature of this telescope.

(3) This brilliant emission of light at the center of galaxy NGC 7319 is as luminous as 40 million suns and is the result of matter streaming toward a supermassive black hole 24 million times more massive than our sun: an event of galactic gluttony that plays out across the universe in many other galaxies as well. JWST’s spectroscopic instruments are also able to probe the light of this streaming material, revealing hot and cool gas as well as the signs of a shroud of microscopic silica dust, a tenuous interstellar beach perhaps awaiting spiraling erosion into the black hole.

(4) Usurped by the grandeur of the quintet’s prominent galaxies there are serendipitous images of hundreds of other galaxies from farther out in space and time, filling in this tiny piece of cosmic wallpaper and providing a testament to the remarkable sensitivity of JWST that they are “simply” there, unassuming and modest yet containing hundreds of billions of other stars and worlds.

(5) Glowing tails containing billions of stars have been stripped from this galaxy by gravitational tidal forces not unlike the tides on Earth (except here the culprit is a smaller, passing galaxy not seen in this image), about 100 million years before the light of this image set off toward us. Maybe these stars will themselves form new dwarf galaxies or simply disperse into intergalactic space.

(6) Intergalactic gas is colliding in the region of this complex red and gold arc as the galaxies bump up against each other at speeds of over 550 miles per second. That gas, shock-heated to millions of degrees is not directly visible here, instead JWST is capturing the glowing details of the messy aftermath where the collision has triggered the formation of new stars and hydrocarbon-rich dust across tens of thousands of light-years of space.

(7) The main image is a composite of separate images taken in different infrared “colors”—some in the near infrared (shorter wavelengths of light) and some in the mid-infrared (longer wavelengths of light)—representing the unique capabilities of JWST. The near infrared image (upper right) doesn’t capture the intense activity of glowing dust caused by shockwaves that the mid-infrared does (bottom right), but together they create a visual symphony of this entangled bank of galactic evolution.