A New Step in Re-Creating First Life on Earth

An RNA molecule that can make copies of a variety of RNAs adds new support to the RNA-world theory. 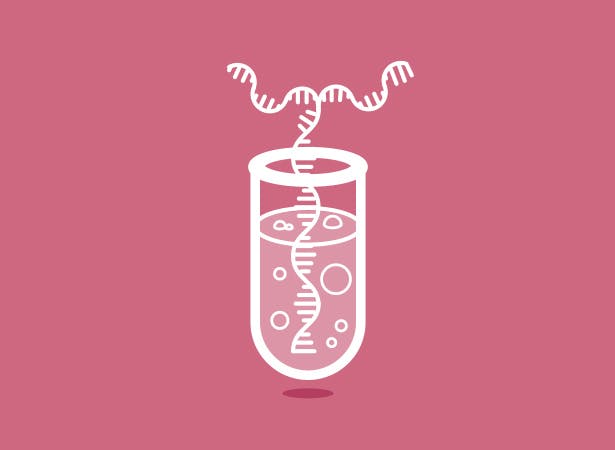 The predominant theory, known as the “RNA world,” proposes that RNA was the first biological molecule. RNA possesses the two essential properties needed for life: It can encode information (like DNA), and it can catalyze biological reactions (like proteins). Perhaps life began with an RNA or RNA-like molecule capable of copying itself, transmitting its genetic information to the next generation.

But the RNA-world theory has a gaping hole. Scientists have been unable to create such a molecule in the lab. Since the 1990s they’ve been able to make RNA enzymes, or ribozymes, that can make complementary copies of an RNA template — an RNA sequence like AACU could be copied into the complementary UUGA, for example. But actually replicating RNA requires two steps, moving from AACU to UUGA and then back again to AACU. Another difficulty is that existing RNA enzymes can’t make long or complex molecules.

Now, for the first time, scientists have produced an RNA enzyme that can make a wide range of RNA sequences. It can also replicate most RNA molecules up to 24 letters long. “Our ribozyme is the first one to replicate RNA in a base-by-base manner, the same way it is done in nature,” said David Horning, a researcher at the Scripps Research Institute in La Jolla, California, who did the work with Gerald Joyce, also at Scripps. The study was published this month in the Proceedings of the National Academy of Sciences.

The researchers started with an existing ribozyme and added random changes to the sequence to create a trillion slightly different versions. The researchers then subjected the pool of ribozymes to a challenge. They selected only those that were capable of making two different complex RNA molecules. They then repeated the process two dozen times — subjecting the molecules that passed each level of challenges to increasingly stringent challenges — to find the candidates that could make the 30-letter RNAs the fastest. This technique, known as experimental evolution, or test-tube evolution, is an artificial version of natural selection. Researchers introduce a few new mutations after each round of the experiment.

The molecule that made the new RNAs most efficiently, known as polymerase ribozyme 24-3, worked surprisingly well. It could synthesize a variety of RNA sequences with complex structures, not just the two from the initial tests. And it was much more efficient than the original ribozyme in making simple RNA molecules.

Most notable was its ability to replicate RNA — creating a complementary RNA sequence from a template, then translating that sequence back into the original sequence — which is much more difficult than simply making RNAs, Horning said. That’s because ribozymes often prefer certain sequences. Just as a Phillips screwdriver works better on Phillips-head screws, some ribozymes prefer RNA strands rich in Cs, one of the four chemical letters that make up RNA. Those ribozymes can make a complementary RNA from a C-rich template such as CCUC, but will then have trouble with the second part of the process — remaking the original from its G-rich complement GGAG, Horning said. Ribozyme 24-3 didn’t have this problem.

Ribozyme 24-3 still faces a major hurdle. It can copy other RNA molecules. But it can’t replicate itself. As noted in Science:

“This paper is an important breakthrough in an ongoing effort to complete the ‘RNA first’ model for the origin of life,” says Steven Benner, an origin-of-life chemist at the Foundation for Applied Molecular Evolution in Alachua, Florida. But Benner cautions that a true confirmation of the RNA world remains a ways off. Not only does 24-3 polymerase’s tightly wound structure prevent it from being able to copy itself, but Benner notes that it has taken the chemistry community 25 years to come up with an RNA copier proficient at copying other RNAs, despite all the tools of modern biochemistry. “[That] suggests we are still missing something important,” Benner says.

Joyce and Horning are continuing to improve ribozyme 24-3 with the goal of ultimately creating a molecule that can copy itself.

The new study is just one of several efforts in the Joyce lab to study the origins of life. For unknown reasons, all DNA and RNA found in nature has a “right-handed” chemical structure. Their “left-handed” forms — what you would see if you looked at DNA or RNA in a mirror — are never found. But in one unique experiment, published in 2014, Joyce’s team created a ribozyme that could copy both left- and right-handed RNA.

That “cross-chiral” ribozyme is intriguing because it works differently from other ribozymes, including 24-3. Those ribozymes bind to their targets according to the sequence of letters, like two sides of a zipper coming together. But the cross-chiral ribozyme binds based on the molecule’s shape rather than its sequence. It provides a new mechanism by which RNA copiers can work, one that doesn’t require a right-handed world.

At the time of the experiment’s publication in 2014, the cross-chiral ribozyme outranked its competitors in flexibility. But Horning said that ribozyme 24-3 is now the clear winner. It’s more efficient than the 2014 ribozyme and can make more complex molecules.

Filming for this video by Petr Stepanek. Editing and motion graphics by Ryan Griffin. Music by Kai Engel.

Video: In this 2-minute video, David Kaplan explores the leading theories for the origin of life on our planet.