A Tale of Two Species

The entangled worlds of horseshoe crabs, whelks, and us. 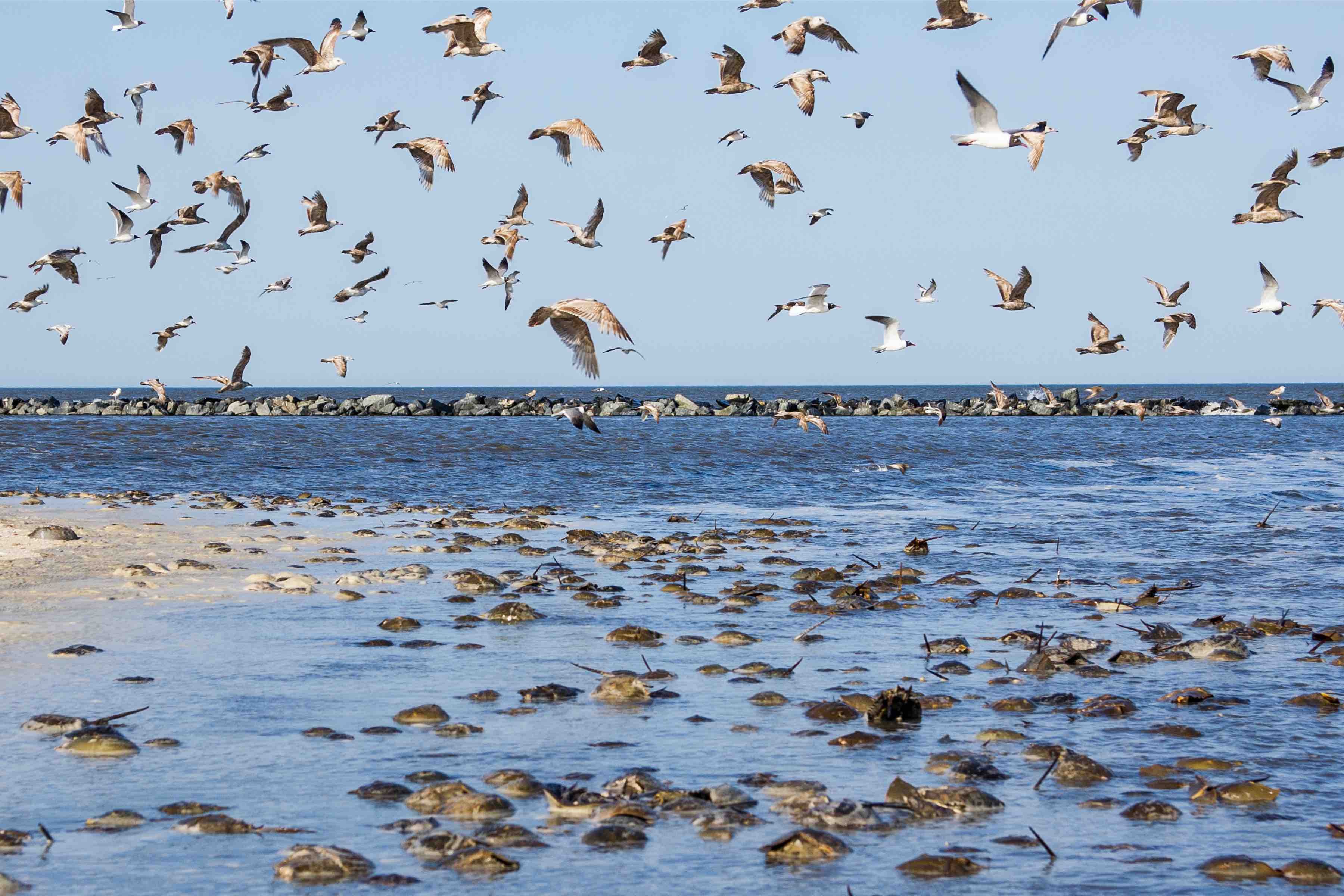 In the middle of the night, in the spring, when the moon is full, I step onto an empty beach on Delaware Bay, silent but for the sound of waves lapping against the shore. As the tide begins to peak, I hear clicking—the shells of horseshoe crabs bumping against each other as, en masse, the animals emerge from the sea. Thousands crowd the tideline in a narrow band extending along the curve of beach as far as I can see. Prehistoric looking, some as large as dinner plates, they come ashore once a year to lay their eggs in the sand. Then, as the water ebbs, they slip back into the sea. The beach quiets, this otherworldly vision dissipates, and it’s as if the horseshoe crabs had never been there at all.

Night after spring night, along the U.S. eastern seaboard from Florida up into Maine, horseshoe crabs come onto beaches to spawn. Their tiny, pin-head sized eggs power vast coastal food webs. Juvenile striped bass, blue crab, and flounder feed directly on the eggs themselves, and then take in the repast again, consuming forage fish—small mummichogs and silverside—who themselves are nourished by horseshoe crab eggs. At least six species of shorebirds feast on the energy-rich eggs, collectively consuming some 330 tons each spring to fuel their long migration to Arctic nesting grounds. Eels love horseshoe crab eggs: when both were more plentiful, eels could be seen in Rhode Island’s Kickemuit River—as many as two or three nestled under one crab—eating eggs as they were laid. Sharks gulp down the entire animal, shell and all. Loggerhead sea turtles, whose preferred food is the horseshoe crab, clean out the shell with their thick beaks.

Humans benefit too: the blue blood of horseshoe crabs, made into assays that detect bacterial contamination in implanted medical devices, and also in injected and intravenous drugs, including vaccines, safeguards us from potentially dangerous and life-threatening infection.

Horseshoe crabs are emissaries from an ancient, primordial sea: the trilobites and graptolites who once kept company with horseshoe crabs in this ancient ocean are long extinct, their names no longer familiar.  The record of what they looked like and where they lived lingers only in their fossils. During the 450 million years since horseshoe crabs appeared on Earth, continents have fused and split, towering mountain ranges have washed into the sea, ocean basins have opened, closed, and opened again, the sea has flooded dry land and receded, the ice ages have come and gone. Through all this cataclysm horseshoe crabs endured. When, during Earth’s greatest mass extinction 250 million years ago, massive erupting volcanoes and burning coal seams filled atmosphere and ocean with carbon dioxide, killing 97% of life in the sea, horseshoe crabs survived.

And yet, despite their tenacity, thousands of horseshoe crabs on a Delaware Beach are but a remnant of numbers once much larger and more robust. Delaware Bay beaches used to be awash in horseshoe crabs, their eggs piled in knee-high windrows, packed into the sand in densities as high as half a million per square meter. Now on the beach I’ll see only a skim-coating of eggs. Standing on the sand on a dark night when horseshoe crabs are spawning, I feel as if I’m in the company of ghosts.

Every once in a while, walking along the wrack line, I find a “mermaid’s necklace” cast up on the shore—the worn, spent egg case of a whelk. A bit frayed now, there may have been as many as 100 or 150 beads on this necklace, strung on a long cord of the same parchmentlike, translucent material. Each bead or egg capsule may have housed 10 or 30 or 50 eggs, cushioned by a protective gelatin, now desiccated. A female whelk laid the egg string, as long as 18 inches, in shallow water, anchoring it to the bottom. She produced 4000 to 6000 eggs over the course of five or six days, or maybe two weeks.  After three months, or maybe 13 months, eggs not eaten or torn away by storms hatched into miniature whelk, each about as long as three grains of sand. They’d grow into the largest marine snails along the U.S. Atlantic coast, some as long as 16 inches.

For many years, I’ve kept two shells from the knobbed whelk: long, spiraled, topped with a crownlike spire, a row of knobs circling the upper part of the shell, and a lustrous orange interior. In my childhood, I’d held shells like these to my ear, hearing the sound of the sea. I still hear it: in the rhythmic sound of my pulsing blood reverberating in a whelk shell, the sea is still singing, echoing that distant time when fish who would become human walked from the ocean, carrying their watery origin ashore.

One of my whelk shells is in pristine condition. Thin scars mark the other where the whelk repaired its shell after a long-ago undersea struggle with prey. Fossils of whelk, found in limestone seafloor exposed in creeks and ditches along the southeastern United States, record their adaptability, reveal how they evolved to better capture food and escape their enemies. At first, whelk ate thinner shellfish, wedging the lip of their own shells in between a scallop’s bivalves, then inserting their tubular proboscis to feed. Today, channeled whelk, distinguished by grooves running along the sutures of their spirals, still feed this way, on bay scallops opening their shells to breathe, or razor and surf clams whose shells never fully close. They wedge their way into the open shells, then from their proboscis extrude a tongue-like radula lined by hundreds of small teeth with which they scrape off the meat. Their prey isn’t always eviscerated. Some escape: scallops swim away, surf clams leap through the water, and razor clams, in just a few minutes, can plunge two feet deep in the mud.

Other, more sedentary prey awaited in this warm shallow sea, and whelk evolved to take them, too. Those who would become knobbed whelk, the ancestors of my shells, began attacking hard clams with thick shells that could remain tightly closed for weeks at a time. A knobbed whelk will grab a quahog with its muscular foot, brace it against the seafloor, then chip away at it until, with an audible crack, the quahog’s shell begins to break. Whelks exert tremendous pressure. Researchers believe it takes 23 pounds of pressure to break a Venus clam.

In the rhythmic sound of my pulsing blood reverberating in a whelk shell, the sea is still singing.

The clams, though sedentary, are nonetheless dangerous: whelk shells often broke in skirmishes. The struggle precipitated an evolutionary arms race: whelk shells grew thicker, then quahogs grew larger. Whelk again adapted, altering their feeding habits, burying themselves in the sand during short, episodic bursts of shell growth (a whelk five inches long can add three-quarters of an inch to its shell in a week). They stayed buried for perhaps a month, emerging to feed once their new shells grew strong and thick. The fossil record attests to their ultimate success: the number of whelk fossils bearing scars from attacking clams dropped from 50 percent to 20 percent, and most adult quahogs now die from attacking whelk.

Today, however, whelk face a predator they cannot easily escape. Fishermen take so many whelk from the U.S. eastern seaboard each year, and at such small sizes, that few mature females remain in the water, jeopardizing the whelk themselves and a fishery worth millions of dollars. Seafloor in Nantucket Sound and Buzzard’s Bay that once teemed with whelk are now bare, the whelk themselves mostly exported for human consumption in Asia.

As the insufficiently-regulated whelk fishery swelled in the 1980s and 1990s, horseshoe crabs became collateral damage. Whelk fishermen bait their pots with horseshoe crab. As whelk landings grew, so did the take of horseshoe crabs. Each year along the U.S. Atlantic coast, fishermen now kill 600,000 horseshoe crabs, primarily for whelk bait. In addition, biomedical companies take more than 500,000 horseshoe crabs each year, bleeding them to manufacture endotoxin assays. They are returned to the water. Researchers find that as many as 30 percent may die, a number strenuously disputed by the industry. Once back in the sea, they may wander on the seafloor, dazed, their tidal rhythms disrupted, perhaps threatening successful spawning.

In 2016, the International Union for the Conservation of Nature, global authority on the health of the planet’s wildlife, determined that American horseshoe crabs are declining and vulnerable to extinction. Year after year we are killing one of earth’s oldest and most enduring animals.

It makes no sense to kill one threatened species to decimate another, or to bleed horseshoe crabs for biomedical use when a synthetic alternative, already tested and adopted, with FDA approval, by one major pharmaceutical company, is available. What are we thinking? Are we thinking?

Lead image: Gulls wheel above horseshoe crabs in Delaware Bay, which is home to their largest American population and a crucial stopover site for migratory shorebirds. CREDIT: Paul Williams