Modified gravity theories have never been able to describe the universe’s first light. A new formulation does. 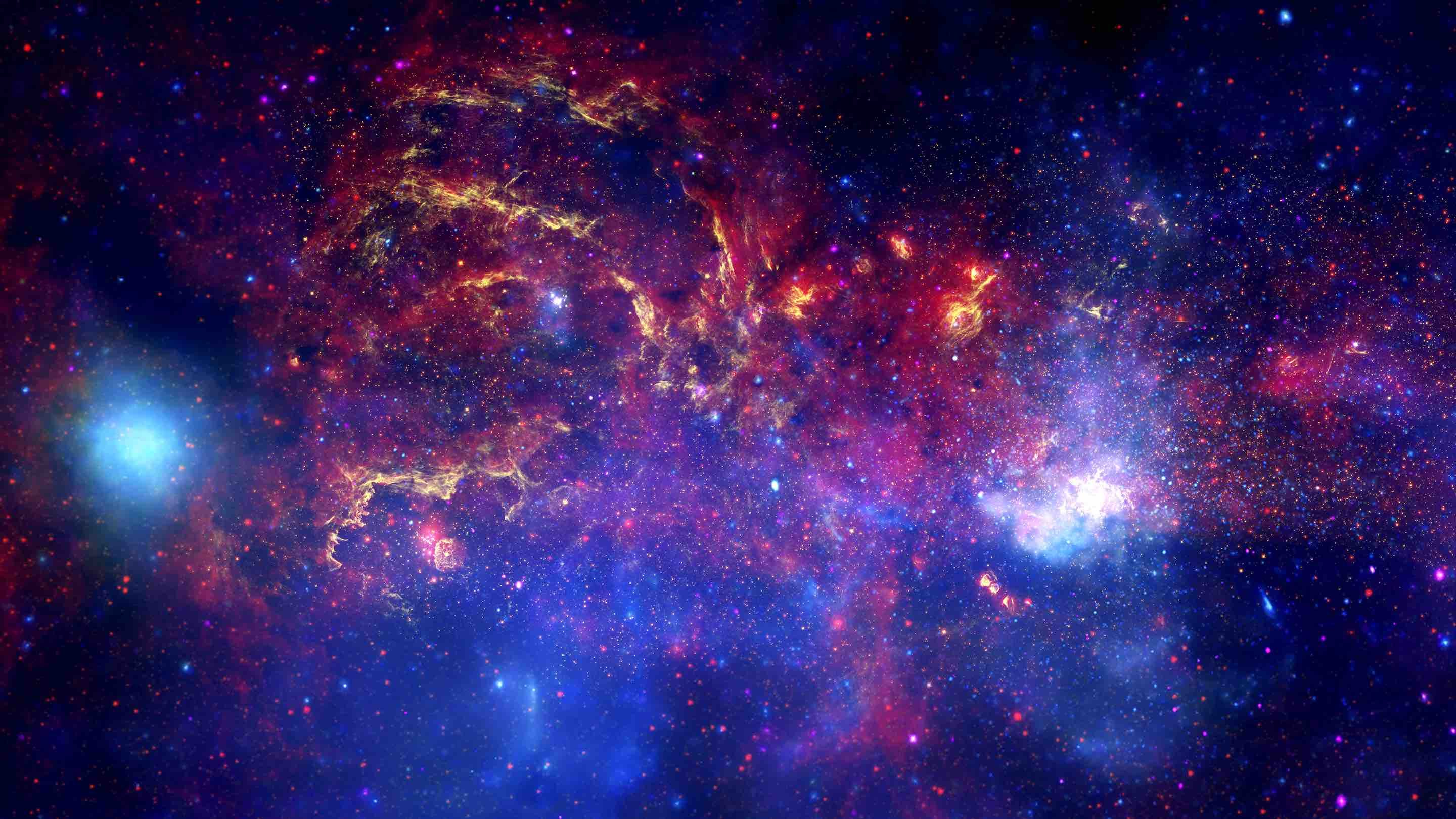 For decades, a band of rebel theorists has waged war with one of cosmology’s core concepts—the idea that an invisible, intangible form of matter forms the universe’s primary structure. This dark matter, which seems to outweigh the stuff we’re made of 5-to-1, accounts for a host of observations: the tight cohesion of galaxies and packs of galaxies, the way light from faraway galaxies will bend on its way to terrestrial telescopes, and the mottled structure of the early universe, to name a few.

The would-be revolutionaries seek an alternative cosmic recipe. In place of dark matter, they substitute a subtly modified force of gravity. But attempts to translate their rough idea into precise mathematical language have always run afoul of at least one key observation. Some formulations get galaxies right, some get the contortion of light rays right, but none have pierced dark matter’s most bulletproof piece of evidence: precise maps of ancient light, known as the cosmic microwave background (CMB). “A theory must do really well to agree with this data,” said Ruth Durrer, a cosmologist at the University of Geneva. “This is the bottleneck.”

Now, two theorists say they’ve finally squeezed an alternative theory of gravity past that obstacle. Their work, which was posted online in late June 2020 and has not yet passed peer review, uses a tweaked version of Einstein’s theory of gravity to reproduce an iconic map of the early universe, a feat that even some rebels feared to be impossible. “For 15 years we’ve just been dead in the water,” said Stacy McGaugh, an astronomer at Case Western Reserve University and a longtime advocate for modified-gravity theories who was not involved in the research. “It’s a huge leap forward.”

Others agree that the model’s preliminary results appear promising. “It’s a bit baroque, but since nothing else has worked so far, I’m still impressed that it seems to work,” Durrer said.

Most cosmologists still prefer dark matter as the simpler of the two paradigms, but they agree that the new theory could be intriguing—if it can truly match additional cosmological observations. “That would be a big barrier,” said Dan Hooper, an astrophysicist at the University of Chicago. “That would be pretty interesting.”

The challenges for alternative gravity theories, collectively known as modified Newtonian dynamics or MOND, were spelled out in a separate preprint coincidentally published the day after the latest model appeared. Chief among them is recasting the leading role dark matter plays in drawing the universe together, as described by a well-established cosmological model known as Lambda cold dark matter (LCDM).

Simply put, LCDM says that we wouldn’t be here without dark matter. The infant universe was so smooth that the gravitational attraction of ordinary matter alone wouldn’t have been enough to gather particles into galaxies, stars and planets. Enter dark matter particles. LCDM uses their collective bulk to sculpt normal matter into the modern cosmic structures studied by astronomers.

LCDM became the standard model of cosmology in part because it so precisely agrees with the CMB. This map of the early universe shows almost imperceptibly thick and thin spots rippling through the cosmos. More recently, researchers have been able to measure the orientation or polarization of the CMB’s light more precisely. Any successful cosmology will need to establish a comprehensive history of the cosmos by reproducing these three observations: the CMB’s temperature, the CMB’s polarization, and the current distribution of galaxies and galaxy clusters.

In the second preprint, Kris Pardo, an astrophysicist at NASA’s Jet Propulsion Laboratory, and David Spergel, director of the Center for Computational Astrophysics at the Flatiron Institute, quantified how difficult it would be for any alternative theory of gravity to compete with one particular feature of LCDM. (Quanta Magazine is an editorially independent publication sponsored by the Simons Foundation, which also funds the Flatiron Institute.) When denser zones of dark matter dragged matter toward them, eventually forming galaxies and stars, this would have largely—but not entirely—washed out the ripples initially moving through the matter. By comparing the CMB’s polarization with today’s patterns of matter, cosmologists can cleanly measure just such an effect: ripple remnants 100 times smaller than the undulations seen in the CMB persist today.

Re-creating these and other features without LCDM’s titular ingredient, Spergel showed, requires the finest of theoretical needle threading. “We haven’t disproven the existence of all these [modified-gravity theories],” he said. “But any alternative theory has to jump through these hoops.”

Tom Złosnik and Constantinos Skordis, theorists at the Central European Institute for Cosmology and Fundamental Physics, believe they’ve done just that—although in a way that might surprise MOND skeptics and fans alike. They managed to construct a theory of gravity that contains an ingredient that acts exactly like an invisible form of matter on cosmic scales, blurring the line between the dark matter and MOND paradigms.

Their theory, dubbed RelMOND, adds to the equations of general relativity an omnipresent field that behaves differently in different arenas. On the grandest scales, where the universe noticeably stretches as it expands, the field acts like invisible matter. In this mode, which Złosnik refers to as “dark dust,” the field could have shaped the visible universe just as dark matter would. The model faithfully reproduces the temperature of the CMB—the result that the duo published in their preprint—and Złosnik says it can also match the polarization spectrum and the matter distribution, although they have not yet published these plots.

“[RelMOND] cannot do worse than LCDM,” said Złosnik, because it very closely mimics that theory for the universe as a whole.

But if we zoom in on a galaxy, where the fabric of space holds rather still, the field acts in a way that’s true to its MOND roots: It entwines itself with the standard gravitational field, beefing it up just enough to hold a galaxy together without extra matter. (The researchers aren’t yet sure how the field acts for larger clusters of galaxies, a perennial MOND sore spot, and they suggest that this intermediate scale might be a good place to look for observational clues that could set the theory apart.)

Despite the pair’s mathematical achievement, dark matter remains the simpler theory. Constructing the new field takes four new moving mathematical parts, while LCDM handles dark matter with just one. Hooper likens the situation to a detective debating whether the person at a murder scene is the murderer, or if they were framed by the CIA. Even if the available evidence matches both theories, one requires less of a leap.

All the same, he doesn’t begrudge others working on what he considers a cosmological conspiracy theory. “I’m glad smart people are thinking about MOND,” he said.

Złosnik hopes dark matter will be detected soon, but in the meantime, he sees his work on MOND more as an exercise in stretching general relativity to its limits than as a full assault on the cosmological establishment. For now, he’s just pleased to have helped show that the mathematics of gravity may accommodate weirder phenomena than many thought.

“There’s a danger of missing out on something useful just by assuming that it’s not possible,” Złosnik said. “It might point the way to something a bit more successful.”

Lead image: A view of the center of the Milky Way galaxy. Theories of modified gravity have had a hard time describing the universe from relatively small scales like this all the way up to the scale of the universe as a whole. Credit: NASA/JPL-Caltech/ESA/CXC/STScI