Three mathematicians show, for the first time, how to form a square with the same area as a circle by cutting them into interchangeable pieces that can be visualized. 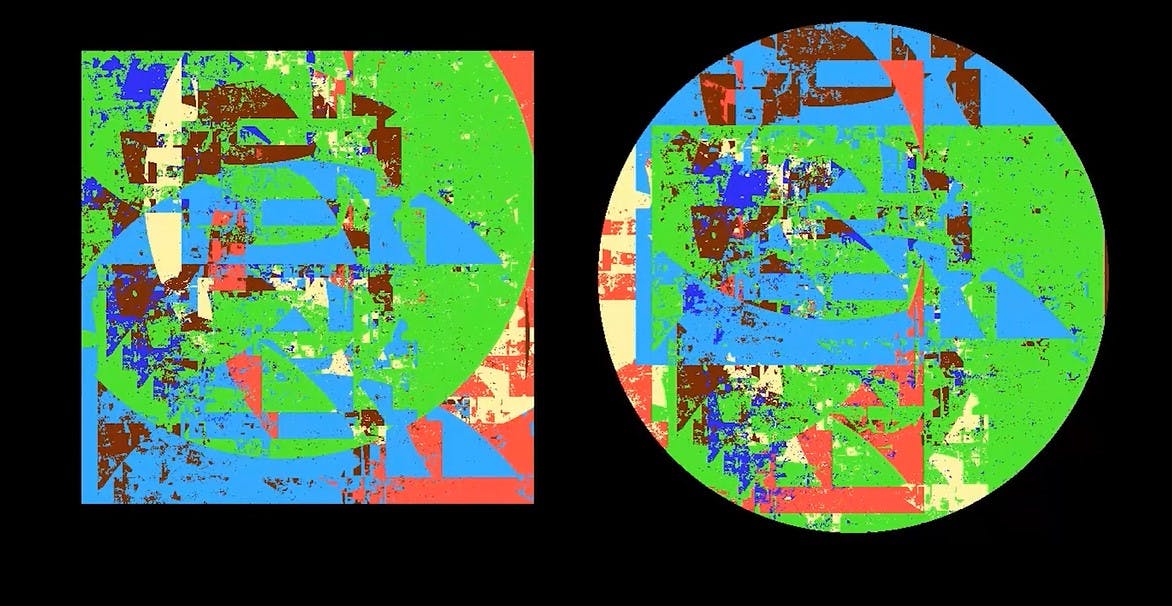 Around 450 B.C., Anaxagoras of Clazomenae had some time to think. The Greek mathematician was in prison for claiming the sun was not a god, but rather an incandescent rock as big as the Peloponnese peninsula. A philosopher who believed that “reason rules the world,” he used his incarceration to grapple with a now-famous math problem known as squaring the circle: Using a compass and a straightedge, can you produce a square of equal area to a given circle?

Surprisingly, mathematicians are still working on this question. And they’re making headway. A paper posted online in early February 2022 by Andras Máthé and Oleg Pikhurko of the University of Warwick and Jonathan Noel of the University of Victoria is the latest to join in this ancient tradition. The authors show how a circle can be squared by cutting it into pieces that can be visualized and possibly drawn. It’s a result that builds on a rich history.

The exact question posed by Anaxagoras was answered in 1882, when the German mathematician Ferdinand von Lindemann proved that squaring the circle is impossible with classical tools. He showed that pi—the area of a circle with a radius of 1—is a special kind of number classified as transcendental (a category that also includes Euler’s number, e). Because a previous result had demonstrated that it’s impossible to use a compass and a straightedge to construct a length equal to a transcendental number, it’s also impossible to square a circle that way.

That might have been the end of the story, but in 1925 Alfred Tarski revived the problem by tweaking the rules. He asked whether one could accomplish the task by chopping a circle into a finite number of pieces that could be moved within a plane and reassembled into a square of equal area—an approach known as equidecomposition.

Put another way, two objects are equidecomposable if they can be broken up into pieces of identical size and shape, or, more precisely, “if you can split them into finitely many parts such that the corresponding parts are congruent to each other,” Pikhurko said.

A 1964 paper was the first to make substantial headway on Tarski’s version of the problem. The authors showed that the equidecomposition could not be done with scissors. The task, if it was possible, would require more complicated fractal pieces, riddled with holes and intricately jagged edges.

That’s where things stood until 1990, when Miklós Laczkovich answered Tarski’s question with a resounding yes: A circle could be reconfigured into a square.

To visualize Laczkovich’s achievement, imagine a circle and square side by side on a page. He demonstrated that if the circle was partitioned into at most 1050 pieces, all of them complicated and with unusual shapes, those pieces could be moved over—without even being rotated—until they completely filled in the square.

But to arrive at this result, Laczkovich didn’t work with shapes. Instead, he transformed the geometry problem into a graph theory problem. He took a large graph with two separate sets of vertices—one corresponding to a circle, the other to a square—and then established one-to-one correspondences between vertices in one set and those in the other.

Stan Wagon, a mathematician at Macalester College, described the results as “jaw-dropping.” Laczkovich showed how to “take a circular space and make it straight.”

There was a catch, however. Laczkovich’s proof is an existence proof, what mathematicians call “nonconstructive.” He proved that it could be done, but he couldn’t say how to construct the pieces, nor could he describe them in any way. Worse, the pieces are “nonmeasurable,” which means it’s impossible to determine their area.

The next big step came decades later in a paper posted in January 2016 by Łukasz Grabowski, Máthé, and Pikhurko. Their proof, unlike Laczkovich’s, is almost fully constructive, which means the pieces are mostly well defined. But again there was a catch: Those well-defined pieces from the circle do not fill the entire square. Additional pieces are still necessary to cover a tiny portion of the square. This portion is so tiny that it has no area, and mathematicians refer to it as a “set of measure zero.”

“Almost all the space has been taken care of,” said Andrew Marks, a mathematician at the University of California, Los Angeles. You can’t even draw in the missing pieces, he said, since the set would look invisible.

Despite these necessary extra pieces, the result was a dramatic step forward, Marks said. “They found a way to square the circle that worked almost everywhere—everywhere except for a set of measure zero.”

Marks, together with Spencer Unger, now at the University of Toronto, made a major improvement a year later, providing the first fully constructive proof of circle squaring—one that works everywhere, without exception. Their paper offers a complete description of all the pieces needed to square the circle. “Their pieces are better,” Máthé said. “They don’t have this ugly set of zero area.”

That said, their proof involves even more pieces—around 10200—and these pieces are still quite complicated. “The drawback in our paper,” Marks said, “is that even though the pieces are explicitly defined from a mathematical standpoint, it is very hard to visualize them.”

That left some room for improvement, which is what Máthé, Noel, and Pikhurko have delivered. Their pieces, again numbering about 10200, are simpler in shape and much easier for mathematicians to visualize.

“The big leap here is that you couldn’t draw Spencer and my pieces in ways you can easily see, but with these pieces you can,” said Marks.

But that’s not the end of the story. “There’s still more mathematics to be done” with this problem, said Alexander Kechris, a mathematician at the California Institute of Technology. “It’s a process.”

Already, Pikhurko has ideas to further simplify the pieces, reducing their total number and making them less uneven. And Marks has done computer experiments that suggest—but don’t prove—that the equidecomposition can be accomplished with 22 pieces. He believes the minimum number is likely even lower.

Steve Nadis lives in Cambridge, Massachusetts. His articles have appeared in numerous magazines, including Discover and Astronomy. He is co-author, most recently, of The Shape of a Life.

Lead image: A trio of mathematicians discovered the most efficient way yet of squaring the circle—or, equivalently, of circling the square—by cutting the shapes into pieces simple enough to be visualized and then rearranging them. Credit: András Máthé