Where our ancestors began to elevate themselves above nature. 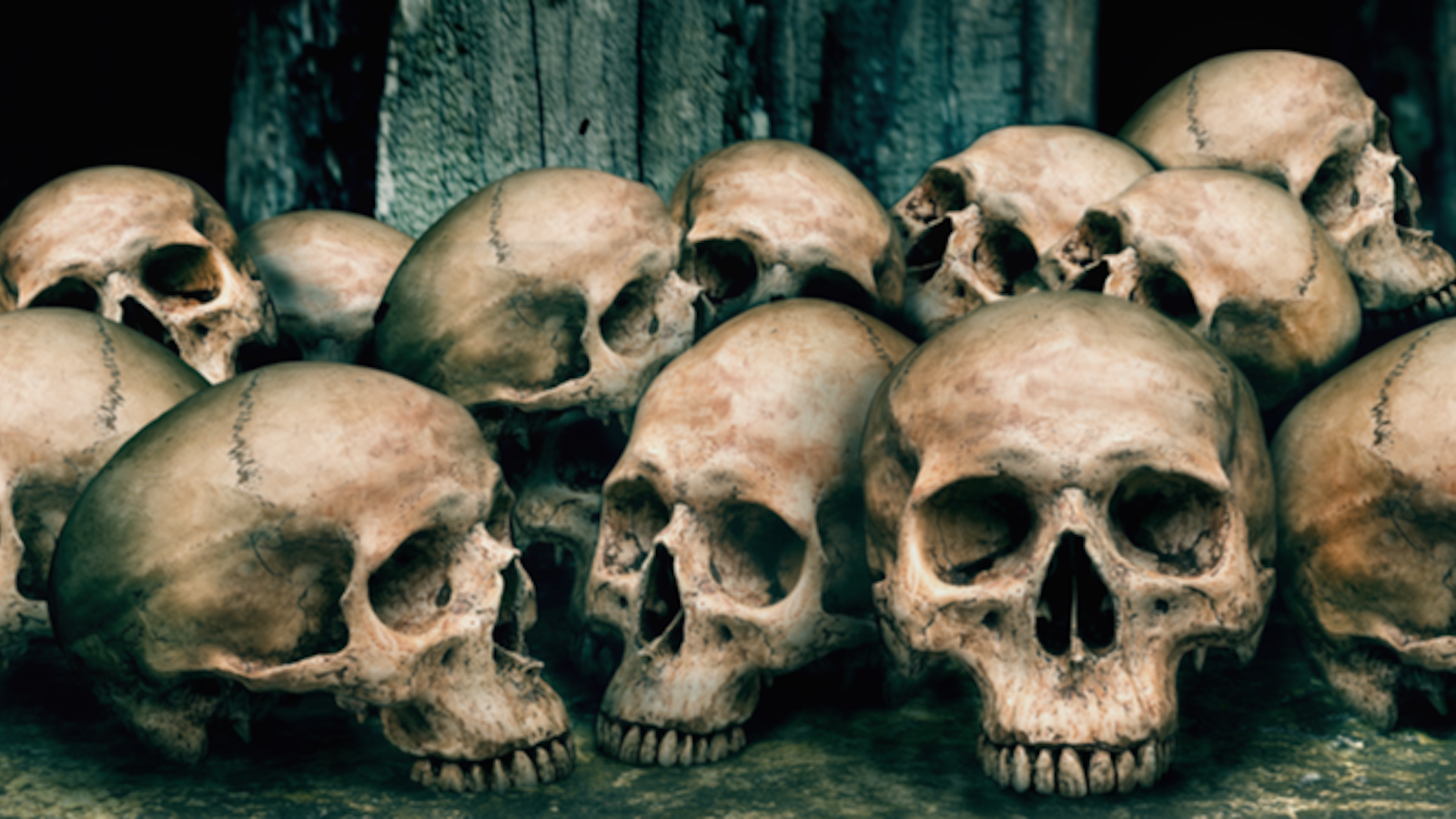 Above our heads, the lights are going out. Instead of thousands of stars in the heavens, artificial light pollution means that in today’s cities we see only a few dozen. A recent global survey found that most people in Europe and the United States can no longer even see our own galaxy, the glittering Milky Way. It’s an inexorable erosion of our skies that mirrors our impact on the Earth. At what point did we become entitled masters of the cosmos, using our technological power to dominate our environment? This shift in our nature is sometimes traced to the Industrial Revolution, or further back to the birth of science, or perhaps the invention of farming. Yet our first step was taken even earlier, revealed by an eerie homage to the underworld buried within the foothills of Turkey’s Taurus Mountains.

Archaeologists there have been studying a 15-meter-high mound called Göbekli Tepe—“Potbelly Hill.” The area is packed with prehistoric pillars and enclosures, including a layer of large circles, up to 20 meters across, dating to the tenth millennium B.C. Up to 12 T-shaped pillars around the edge of each space were connected by a stone bench. Two more giant pillars—up to 5.5 meters high and each weighing several tons—stood parallel in the center, with traces of carved arms, belts, and loincloths made of animal skins. Other stones are covered in carvings of animals: spiders, scorpions, vultures, foxes, boar, gazelles. It is the earliest great stone monument known and a staggering 6,000 years older than Stonehenge.

In these stones, German archaeologist Jens Notroff and his colleagues, who have worked at Göbekli Tepe since 2014, see clear evidence of our shifting relationship to the natural world. In the earlier cave art of the Palaeolithic, people are rarely represented; it’s the animals that take center stage. By contrast, the foxes, snakes, and scorpions of Göbekli Tepe are reduced to smaller attributes or decorations on those huge anthropomorphic pillars. As the team put it in 2015, “humans are no longer depicted as a coequal part of nature, but are clearly more prominent and ‘raised’ above the animal world.” The art shows, they argue, that people had already begun exerting power over nature: a “mental control” that led to the subsequent physical control of domestication.

Another striking aspect of Göbekli Tepe is an apparent obsession with death. The art here features multiple images of headless people as well as statues of heads apparently broken from larger statues. Among animal remains found in the sediment—thought to be the debris from lavish feasts—are hundreds of pieces of human bones. Anthropologists reported in 2017 that most of these are from skulls, and that some are carved with grooves and holes in a way that suggests intact skulls were once hung up for display.

A house wasn’t just a place to live but the expression of a mythical world. It was a model of their universe.

Klaus Schmidt, who discovered Göbekli Tepe in 1994, interpreted the abstract T-shaped statues as beings from a “transcendent sphere” (naturalistic statues found at this site and elsewhere show that the builders could depict realistic humans when they wanted to). And, intriguingly, the circular enclosures appear to have been accessed not via doors or gateways but through small openings in “porthole stones.” One of these stones is decorated with a boar lying on its back. The circles, Schmidt suggested, represented the realm of the dead, which could only be entered by crawling through the hole.

In fact, a preoccupation with death and particularly skulls emerges across the region at this time and in the centuries following, with human remains commonly buried inside people’s houses. At sites such as Jericho and Ain Ghazal in Jordan, dating to the tenth and ninth millennia B.C., selected skulls were removed after death and given faces made of plaster, with shells for eyes, before being placed under the floor. At Çayönü, in southern Turkey, archaeologists found a building that they called the “House of the Dead,” dating to around 8000 B.C., with 66 skulls beneath the floor and the remains of a further 400 people. It also held a large, flat stone like an altar, with traces of human and animal blood.

A particularly bizarre example is Çatalhöyük, a 20-meter-high mound on Turkey’s Konya Plain, a few hundred kilometers from Göbekli Tepe. The mound contains mud-brick houses from a settlement that housed thousands of people at its height around 7000 B.C. The closely packed houses were dug down into the ground, and entered by climbing down a ladder through a hatch in the roof. Inside, the houses were richly decorated with paintings, as well as sculptures of animals that burst out of the walls. There were no doors; to move between rooms, inhabitants had to crawl through portholes. The small chambers were further subdivided into sections, just a meter square, which occupied different vertical levels, with their edges marked or guarded by bulls’ heads. Human bones were found buried beneath these platforms and in the walls, including a stillborn foetus enclosed in a brick.

The residents seem to have found the walls of their houses highly significant. As well as embedding objects in them, some had small, undecorated alcoves just big enough for a single person to crouch within. And wall sculptures of animals such as leopards and bulls were repeatedly replastered, up to a hundred times.

It seems a crazy way to live: cramped, dark, and difficult to move around. Ian Hodder, an archaeologist at Stanford University who has been excavating the site since 1993, has concluded that for the residents of Ćatalhöyük, the physical structure of their houses was entwined with their mythical beliefs: “The world was replete with substances that flowed and transformed, and with surfaces that could be passed through.”

Archaeologist and rock-art expert David Lewis-Williams goes further. He believes that people here were deliberately mimicking the experience of crawling through limestones caves. There are such caves in the Taurus Mountains, just a couple of days’ journey to the south, and pieces of stalactite and limestones from these caves have been found in the Çatalhöyük houses. Lewis-Williams has suggested that—just like visitors to the caves of Upper Palaeolithic western Europe—the people who built these houses saw the walls as permeable interfaces, or portals to the cosmos’s spirit realms. At Çatalhöyük a house wasn’t just a place to live but the material expression of a mythical world. It was a model of their universe.

Human bones were found buried beneath the platforms, including a stillborn foetus enclosed in a brick.

Houses modeled on the cosmos are still known in societies around the world. The Barasana people in the dense forests of Colombia, for example, traditionally live in wooden longhouses called malokas. Each one is a miniature universe in which the roof is the sky and a vertical post, called “the seat of the sun,” aligns with the sun’s rays every day at noon. The major horizontal roof beam, oriented east-west, is called “the sun’s path.” The floor is the Earth and beneath it is the underworld, where the dead are buried. In his 2005 book, Inside the Neolithic Mind, Lewis-Williams argues that a similar principle might explain other Neolithic monuments and cult buildings found in the Near East, such as the stone circles of Göbekli Tepe. Like Schmidt, he concludes that they modeled the spirit world, or the cosmic realm of the dead, incorporated spaces that are sunk into the ground, with human remains often under the floor.

Were the builders only concerned with the underworld, or did they also look up at the sky? Göbekli Tepe is located on a high point in the landscape, so would have offered a panoramic view of the heavens. Some researchers have suggested that the flat tops of its pillars could have been used to observe the rising or setting of prominent stars, such as Orion’s Belt, or were built to commemorate the gradual appearance in the sky (due to precession) of the bright star Sirius. Others have linked the animal carvings at the site to specific constellations, proposing that a scorpion depicted underground might represent Scorpio below the horizon.

Notroff isn’t convinced: He suspects the enclosures were at least partly subterranean, dug down into the sediment, and had roofs, perhaps made from an organic material such as animal hides. So the site may make more sense as a terrifying journey to a cave-like underworld than as an astronomical observatory. He has experienced these spaces beneath a roof recently built to protect the site, and the shadows make the pillars and carvings look larger and “even more awe-inspiring,” he told me. “I can only imagine how all these images of giant scorpions, curling snakes, and snarling predators must have affected the young hunter on his first descent into the darkness, maybe with nothing but the flickering light of a torch.”

This doesn’t mean that the builders of Göbekli Tepe weren’t interested in the sky. One of the best-preserved pillar statues wears a carved necklace decorated with a disc and crescent. These symbols are thought to refer to the moon; it has even been suggested that the necklace identifies this pillar as a moon-deity. Either way, structures like Göbekli Tepe reveal a fundamental shift in how people related to the cosmos. It seems likely that the people who constructed these sites had a similar tiered universe—with lower, middle, and upper worlds—to their predecessors in the Palaeolithic and traditional hunter-gather societies today. Lewis-Williams argues that altered states of consciousness were likely still important as a way of journeying between these different cosmic realms.

It’s significant that such journeys now occurred in man-made rather than natural settings. The residents of Çatalhöyük appear to have copied the cramped passages of natural caves. Elsewhere, the greater control that people now had over these portals allowed the development of simpler, more formulaic designs: circles, pillars, squares. As Lewis-Williams has pointed out, this shift toward purpose-built structures would have allowed for greater social control, with the emergence of powerful elites and formal rituals—decorating and displaying selected skulls after death and possibly human sacrifice—that prescribed who could access these other realms and how.

Göbekli Tepe epitomizes two important changes that seem to have happened in parallel around 12,000 years ago, both of which involve societies beginning to separate themselves from, and elevate themselves above, nature. The spirit realms became populated primarily not with animal guides but human ancestors. Instead of using existing caves or natural features as entrances to other worlds, people started to build their own.

Jo Marchant, an award-winning science journalist, is the author of The Human Cosmos. Her previous book, Cure, hit the New York Times best-seller hardcover nonfiction and science lists. She is also the author of Decoding the Heavens, which was, like Cure, short-listed for the Royal Society Prize for Science Books.

Adapted from The Human Cosmos: Civilization and the Stars by Jo Marchant, published by Dutton, an imprint of The Penguin Group, a division of Penguin Random House, LLC. Copyright © 2020 by Jo Marchant.