Time was found to flow differently between the top and bottom of a single cloud of atoms. Physicists hope that such a system will one day help them combine quantum mechanics and Einstein’s theory of gravity. 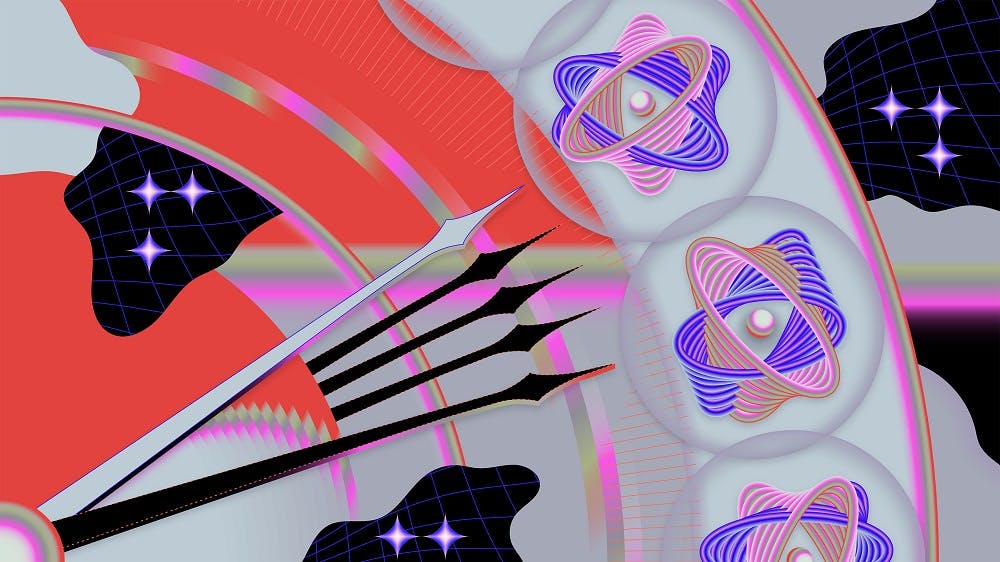 The infamous twin paradox sends the astronaut Alice on a blazing-fast space voyage. When she returns to reunite with her twin, Bob, she finds that he has aged much faster than she has. It’s a well-known but perplexing result: Time slows if you’re moving fast.

Gravity does the same thing. Earth—or any massive body—warps space-time in a way that slows time, according to Albert Einstein’s general theory of relativity. If Alice lived her life at sea level and Bob at the top of Everest, where Earth’s gravitational pull is slightly weaker, he would again age faster. The difference on Earth is modest but real—it’s been measured by putting atomic clocks on mountaintops and valley floors and measuring the difference between the two.

Physicists have now managed to measure this difference to the millimeter. In a September 2021 paper posted to the scientific preprint server arxiv.org, researchers from the lab of Jun Ye, a physicist at JILA in Boulder, Colorado, measured the difference in the flow of time between the top and the bottom of a millimeter-tall cloud of atoms.

The work is a step toward studying physics at the intersection of general relativity and quantum mechanics, two theories that are famously incompatible. The new clock takes a fundamentally quantum system—an atomic clock—and intertwines it with gravity’s pull.

In the experiment, Ye’s team used an optical lattice clock, a cloud of 100,000 strontium atoms that can get tickled by a laser. If the laser’s frequency is just right, the electrons orbiting each atom will be excited to a higher, more energetic orbit. Because only a tiny range of laser frequencies motivate the electrons to move, measuring this frequency provides an extremely precise measurement of time. It’s like a quantum grandfather clock, where the ticking comes from the oscillations of the laser light rather than the swing of a pendulum.

The specific way they measured the shift—comparing two parts of the same cloud—allowed them to cancel out a lot of noise that was common to both parts. It’s like measuring a sailboat in rough seas. Even as it lurches up and down unpredictably, the distance between the keel and mast will always stay constant. While a clock made of a cloud of atoms can drift due to any number of things—electric fields, magnetic fields, the laser light itself, heat from the environment—the difference in frequencies between the top and bottom of the cloud remains the same. Measuring that difference revealed the effect of gravity. “That’s not trivial to do,” said Andrew Ludlow, an atomic clock expert at the National Institute of Standards and Technology, who was not involved with the research.

According to the preprint, this demonstration is a step toward studying the union of general relativity and quantum mechanics. (The authors declined to be interviewed until the paper is published in a peer-reviewed journal.)

Relativity describes a space-time in which objects have well-defined properties and move predictably from one location to another. In quantum theory, by contrast, an object can be in a “superposition” of many properties at once, or it can suddenly jump into a particular location. These two descriptions match their respective realms of reality well, but they’re incongruous when taken together.

So what happens when both quantum mechanics and relativity are necessary to describe a phenomenon?

In order to study such questions, physicists are always looking for systems where both gravity and quantum mechanics are important. “Clocks are for sure one of the most promising systems to test these types of features,” said Flaminia Giacomini, a theoretical physicist at the Perimeter Institute for Theoretical Physics in Waterloo, Canada. Clocks naturally straddle the line between quantum mechanics and relativity. They tell time, which is an inherently relativistic concept. They’re also fundamentally quantum: The way the electrons move from one energy level to another is by passing through a superposition of being in both levels.

If Ye’s team improves their clock’s sensitivity by about another factor of 10—a few years from now, at the current rate of improvement—they can start searching for gravitational effects in the behavior of their atoms. The first signatures of this would appear in a process called decoherence.

Decoherence is responsible for the transition from the weird world of quantum mechanics to the ordinary world of everyday experience. Each time the environment interacts with a quantum system, it can be seen as a tiny measurement made on the system—a way for the environment to learn something about the quantum system and destroy its “quantumness.” Physicists have gotten very good at shielding their quantum experiments from anything in the environment that would disturb them. But they can’t shield them from gravity.

As the atoms in Ye’s clock move up and down in the cloud, experiencing a variation in the flow of time, gravity will alter the way they interact with each other and cause an observable change in their dynamics. It still won’t be quantum gravity per se, where gravity is quantized into fundamental particles called  gravitons. But it would be a valuable instance of quantum mechanics and gravity interweaving to cause a new phenomenon.

“Whatever can help us learn what type of behavior gravity has when both quantum and gravitational effects play a role, I think is going to be very, very helpful for future research,” Giacomini said.