Archeologists Are Planning to Sink This Ship Dozens of Times 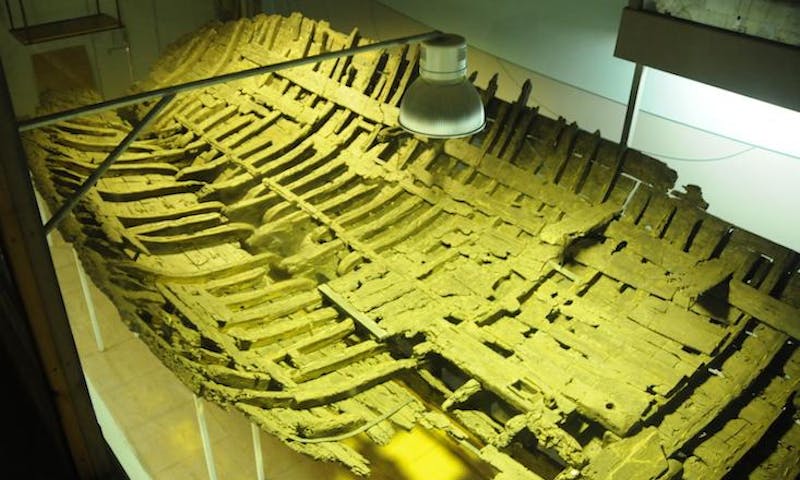 In 1967, a team of archaeologists led by Michael Katzev dove to the bottom of the churning Aegean Sea. They were tipped off by a sponge diver who, about two years earlier, spotted something unusual a mile offshore of Kyrenia harbor, in Cyprus: a lumpy mound of pottery covered by a fuzzy layer of sediment.

Katzev’s team ended up finding what was once a 47-foot-long ship, which turned out to be about 70 percent intact. The Kyrenia ship, as it’s called, is the oldest known Greek vessel (another wreck discovered near Uluburun, Turkey, dated to the end of the 14th century BCE, is the oldest ship overall). Archeologists believe that it sailed around the time of Alexander the Great, carrying trade goods like wine, salt, and almonds for a period of 15 to 20 years. A microcosm of that ancient world, the Kyrenia is one of the most prized archaeological discoveries in a nation famous for them. Its golden timbers, which survived 23 centuries under the anaerobic silt, turned dark from oxidation within days of its first exposure to the open air.

Taking stock of the ship’s cargo and figuring out how it sank has been arduous. “Unlike a lot of underwater excavations, we didn’t start out being able to use digital imaging because we started in 1968-69,” says Susan Katzev, wife of Michael Katzev (who died in 2001). “We did it photograph by photograph, many hours of our photographer diving every morning, every afternoon to record the thing two-dimensionally.”

Using this research, full-scale replicas of the ship were built, starting in 1985. These vessels helped test ideas about ancient maritime activity and about the wreck itself—how its cargo was packed, for instance. (Katzev’s team learned that linen soaked in melted beeswax became too brittle to be an effective cover over the ceramic amphorae, which were used to store wine. Goatskins soaked in water overnight and tied with twine around the neck of the amphorae, though, were more effective: The skins didn’t leak.) But replicating ships and amphorae is expensive, and even with the physical replicas, there were still hypotheses about how the ship sank that proved impossible to test. What the researchers really needed was a virtual, 3D model that could be loaded with cargo and sunk repeatedly in the safe waters of a digital simulation.

In the past decade, numerous projects have relied on virtual archaeology to test hypotheses. Archaeologists affiliated with excavation and research at the 10,000 year-old city of Catalhöyük, in Turkey, helped build a replica of the site in 2007, using the online virtual world Second Life to bring the archaeological wonder to the public. Luis Miguel Sequeira and Leonel Morgado, archaeologists on the Catalhöyük project and others like it, say, “These [virtual worlds] can be explored as new ‘laboratories’ for the purpose of further research, using tools never before available to historians and archaeologists.” Other archaeologists using virtual models have tested ideas about the population growth and decline of the Anasazi in the Four Corners Region; whether the Inca towers on the Island of the Sun (in Lake Titicaca, Bolivia) were used for solstice celebrations or funerary rites; and whether Qumran, a settlement known for its proximity to the caves that held the Dead Sea Scrolls, was used by the Scroll writers or by people not affiliated with those religious texts.

With these digital replicas, it’s much easier to change a variable—say, whether a door opens from one side or the other—and see how that small change impacts the overall structure. Donald Sanders, an architect and archaeologist who founded Learning Sites, which specializes in archaeological models for education and research, and the Institute for the Visualization of History, has worked on dozens of projects for schools, museums, tourism offices, and professional archaeologists. He assembles all the research on a particular site—notebooks from the excavations, photos, and drawings—before trying to understand what problem his client wants solved. In the case of the Kyrenia shipwreck, those problems have to do not only with what caused the ship to sink, but also what allowed so much of its goods to be preserved.

“The Kyrenia ship is cool because it survived so completely, not only in the hull but the contents of the cargo,” Sanders says. “One of the things that we hope to eventually do with the Kyrenia wreck, once all the people studying it get their conclusions to a certain point, is to re-sink the ship. The mechanism of how the ship got a hole in it, and how the cargo is arranged—nobody has an answer to all those things. But it’s fairly easy to do with a 3D model.”

Completing it, though, has been delayed while the researchers finalize their model of the ancient ship. Susan Katzev said researchers are double-checking their interpretations of the contours of the hull and how it fit together. Once that superstructure model is conclusive, they’ll be able to repeatedly simulate the shipwreck until they find the storage pattern for the amphorae that matches how they ended up in reality. With this information they’ll be able to understand details of the ship’s history, like how it was packed, why more of the amphorae didn’t break when the ship sank, and also whether pirates attacked it—what appear to be spear points dot the hull.

“Though it’s a lot more fun to sail the ship,” Sanders says, “this won’t give you a splash of water in your face.”

Lorraine Boissoneault writes about science, nature, history, and adventure. Her first book, The Last Voyageurs, came out in April. Follow her on Twitter @boissolm.

Watch: John Ochsendorf, a professor of architecture at MIT, explains the difference between a great ancient building and a modern one.

The lead image is courtesy of Graeme Churchard via Flickr.