Are We Doctors or Data Workers?

I want to solve illnesses, not scroll through them—the dilemma of electronic health records. 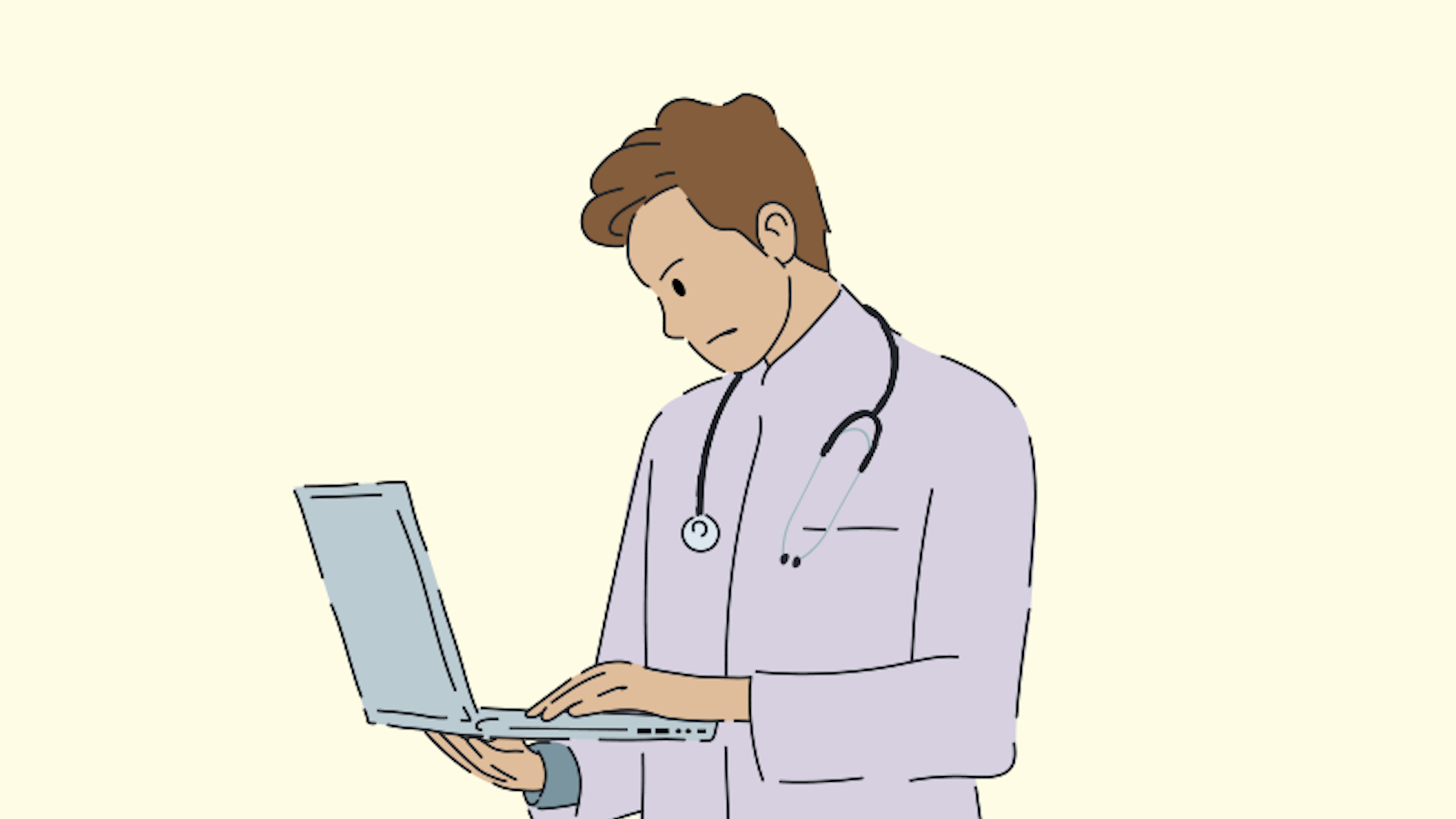 Stop, or I snap your nose off,” Gregory House tells a crying, wriggling toddler. In an episode of the medical drama series House, the titular antihero pulls a red fire truck figurine out of the child’s nostril. He places it down next to a firefighter and a police officer that he removed during previous visits. After a quick look, House grabs a magnet and extracts one final toy from the infant’s nose: a cat. This tiny patient wasn’t shoving these toys up his nose haphazardly, House explains. Each lodged toy represented a failed yet clever attempt to save the cat.

House’s bedside manner leaves much to be desired, but, as a medical student, I admire his ability to group seemingly disparate items together to explain the unexplainable. My early role model of a doctor, informed by Sherlock Holmes, Gregory House, and the natural sciences, was a neighborhood Nancy Drew, with the human body as her domain of expertise. Storybook detectives often leverage astute observation, an uncanny resilience, and a penchant for problem-solving to assist others—all desirable traits in a physician. Stripping away the layers of rapport-building and human connection, I thought, what were patient examinations but medical whodunits?

And I’m not alone. Lakshmi Krishnan, a physician, historian, and medical humanities scholar at Georgetown University, told me that, as a young doctor in training, she noticed “most physicians agreed upon one thing: that diagnosis is a type of investigation, like detection.”

Many physicians have fancied themselves virtuoso detectives, historians, technicians, archivists, and even travel consultants advising patients through the odyssey of life. But these romantic notions frequently come into conflict with the modern reality of medicine. Since being a doctor now often means scrutinizing electronic health records more than a patient’s body, it’s worth questioning if medicine today is less a “virtuosic craft” and more a form of “clerical labor,” Krishnan writes in a recent paper in the journal Medical Humanities, co-authored with Michael Neuss, a physician and historian at the University of Pennsylvania.1 “Debates about the EHR raise questions about physicians’ professional identity, the nature of clinical work, evolution of the patient/practitioner relationship, and narratives of technological optimism and pessimism.”

At 5 in the morning, I’m already opening the portal to the electronic health record. A seafoam green background frames a wall of data, bricks of lab values in black and red painting a sometimes vivid—and sometimes muddy—picture of the night before. My eyes flit across columns of numbers that hint at the status of ongoing infections, bouts of uncontrolled pain, and kidney function. I click through radiology and pathology reports, scroll past progress notes, and triage alerts vying for my attention. My phone buzzes with requests from nurses, speech-language pathologists, nutritionists, social workers, and physicians—each ping a reminder of the unbreakable bond between the electronic health record and me. Despite the instinct to place the electronic health record at the periphery of what I do in the hospital, wielding its power efficiently to document, assess, and communicate is critical to my daily work.

At 5 in the morning, I’m already opening the portal to the electronic health record.

The origins of the electronic health record were noble. Early programs such as the INTERNIST-1 computer-aided diagnosis project, which began in 1971, were grounded in a belief that poorly organized paper records obscured patient complexity and limited clinicians’ ability to respond to that medical complexity. What detective wouldn’t want to clean up the cluttered corkboard of suspects and motives?

But the technological optimism that fueled early electronic health record development efforts quickly began facing opposing skepticism. It became apparent that data glut in electronic health records can make it easy for the most salient information to get lost in the storm—lab values, test results, and exam findings on a progress note can all get missed due to information overload and chart fatigue.

Nevertheless, electronic health record usage surged alongside the unshakable beat of technology’s advance. Even before the 2014 federal mandate for providers to roll out electronic health records, a 2013 study of electronic health record usage in a community hospital found that emergency medicine physicians clicked about 4,000 times over a 10-hour shift.2 Others have expressed concern that an obsession with documenting every passing detail (a phenomenon known as “note bloat”) is fueling professional burnout. Authors of a 2018 study, for example, found that medical notes in the United States were almost four times longer than notes in other countries.3 (While it remains unclear if longer notes lead to better health outcomes, it’s worth noting that U.S. health measures are generally worse than expected based on how much we spend on health.) And that’s not even getting into concerns about how electronic health records may be used differently across clinicians in the same healthcare setting. For example, a growing body of evidence suggests that female physicians spend more time working in the electronic health record and get significantly more messages from colleagues than their male counterparts.4

To avoid “a death by 1,000 clicks,” doctors must rethink their relationship with electronic health records.

Now that patients in the U.S. have unprecedented access to most physician notes, they may gain insight into how clinicians discuss their care—with possible unintended consequences.7 It may bring patients face to face with the extent of bias that plagues medical documentation. A 2022 study of EHRs from an urban academic medical center found that, compared to white patients, Black patients were 2.54 times more likely to have negative patient descriptors like “aggressive” or “combative” in their history and physical notes, after controlling for sociodemographic and health characteristics.8 While more research is needed to determine how these negative descriptors may directly affect medical decision-making, physicians clearly have a professional obligation to avoid stigmatizing language in their documentation. Considering this responsibility to record data thoughtfully, it seems only more pressing that we re-evaluate the role of data management in physicians’ professional identity.

Electronic health records were embraced as a means of making doctors more efficient and making their lives easier, but if doctors are spending more time on clerical duties than talking with patients, are electronic health records eroding the nature of what it means to be a doctor? Perhaps. But Krishnan and Neuss think electronic health records provide an opportunity to reimagine what doctors can be. “It seems flattering to think of ourselves as physicians in these really positive, glowing terms—as somebody who is almost like a wizard, who has this genius insight as to what’s going on with patients,” said Neuss. “What we’re asking is to step back a moment and pause and reflect on the possibility that holding ourselves to this ideal of a virtuoso may have some negative—if not totally intended—effects.”

They suggest that for physicians to avoid a “death by 1,000 clicks,”9 doctors must rethink their love-hate relationship with electronic health records. Yes, we do need to advocate for making electronic health records more of a tool and less of an overlord. And there are smart ideas about how to do that.10 But there’s no denying that the brave new world arrived, like the seismic event that creates a wholly new physical landscape, a decade ago. It’s time to unwring our hands and roll up our sleeves. Time to examine whether the professional identity of physicians should more strongly embrace the data in which they are now so enmeshed. “Instead of viewing the EHR as separate and apart from clinical care,” said Krishnan, “we need to realize that it is fully bound up in it, and that understanding the historical and social factors that impacted its development can help us untangle what it was meant to be, what it is now, and what we ought to do about it.”

The stories we tell ourselves about our work and our world, in other words, don’t simply allow us to interpret what already exists—they allow us to construct what should exist. For me, using the electronic health record has at times made me feel like I’m doing something antithetical to the mission of reducing patient suffering, given the clunky translation of clinical interactions into an electronic format. But Krishnan and Neuss’s work suggests an alternative path: Maybe there is a way to incorporate all these clerical tasks into my very understanding of physicianhood, rather than view them as distractions from the “true” work of doctoring. I want to be hopeful that the medical profession can better lean into its data-management side. The status quo of rejecting this responsibility seems an untenable exercise in cognitive dissonance. After all, electronic health records are here to stay, at least until something better comes along.

Krishnan and Neuss describe the electronic health record’s evolution as a “study in alternating optimism and caution,” and express concern about doctors relying on metaphors to craft their self-identity. They suggest “the prototype of the doctor as sleuth may not only be outdated and romantic; it actively overlooks key aspects of clinical work like information management, social analysis, and iterative communication, which are as critical as they are commonplace.”

Perhaps revisiting the roots of our romanticization of medicine may help us understand what it means to be a physician today in a new light. Even if it means setting aside our metaphorical magnifying glass.

Michael Denham is a medical student at the Columbia University Vagelos College of Physicians and Surgeons. Follow him on Twitter @MichaelWDenham.

7. Qureshi, Z. Do you really want to read what your doctor writes about you? The Atlantic (2022).