Beyond What’s Possible: The State of the Art of Athletic Doping 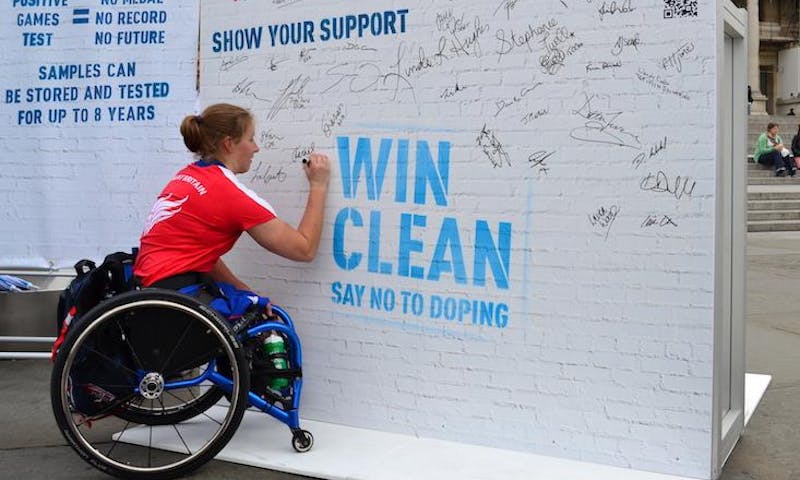 Ever since ancient Greek Olympians downed exotic meats, “magic” potions, and animal hearts and testicles, athletes have tried to improve their performances by consuming special substances. Such behavior wasn’t considered cheating back in ancient times, and this attitude continued into the modern revival of the games. When a runner named Thomas Hicks famously won the 1904 Olympic marathon after drinking brandy and strychnine, nobody considered taking the medal away. (They did, however, strip the medal from the guy who originally came in first, who drove much of the way.) The early, would-be performance enhancers were, for the most part, thought of as legitimate cures for ordinary ailments.

That attitude changed with the advent of modern, synthetic chemicals like human growth hormone and steroids, which can give athletes big advantages—and many of which endanger people’s long-term health. During the Cold War, the rivalry between East and West made its way into the Olympics, fueling the widespread use of performance enhancers and also concerns about them. Such concerns have become a bigger story than ever during this year’s Olympics in Rio de Janeiro, such as when American swimmer Lilly King vilified her Russian competitor Yulia Efimova as a “drug cheat.”

Olympic competition is fierce, and many athletes are willing to go outside the rules to win. The methods of cheating become ever more sophisticated, while the ability to catch cheaters follows along, usually a step or two behind. Meanwhile, rules and attitudes on doping are inevitably influenced by political and social factors. The development, use, and policing of performance enhancers show the increasingly complicated ways that science and sport interact.

Russian tennis player Maria Sharapova brought meldonium to widespread attention in March, when she admitted taking it and earned herself a two-year ban. The drug enhances blood flow to the heart, among other organs, and is used to treat ischemic heart failure, where heart muscle is deprived of blood. But it is also thought to help athletes recover more quickly and to fend off exhaustion, and is apparently taken by many athletes, especially Russians. A study featured in a documentary by German broadcaster ARD found that 17 percent of Russian athletes had the drug in their system. It’s commonly available in the country without a prescription and was until this year used openly by many athletes. “I’ve been working [with meldonium] for 20 years; we could never imagine that it would be included as a doping substance,” Sergei Sheremetiev, a physician with Russia’s ski-jumping team, told The New York Times.

The ban caught Russian athletes like Efimova, who tested positive in the spring. She was temporarily barred from the Olympics but was let back in at the last minute after she appealed, arguing she hadn’t taken the drug since the rule change.

One sad part about the whole affair is that it’s not clear whether meldonium actually gives any advantage at all to athletes.

For a few years, the World Anti-Doping Agency (WADA) banned this, the world’s most widely used psychoactive drug. But they decided to rescind the ban in 2004, which was probably wise; it’s difficult to argue that we should ban a substance that occurs widely in nature, isn’t associated with harm at low levels, and has been consumed for millennia by humans, including a large percentage of the world today.

But there is no question that it enhances performance. Steve Magness, who wrote The Science of Running and coaches cross country at the University of Houston, tells The Wall Street Journal that the drug can shave 1 percent to 2 percent benefit. In elite athletics, that can more than make the difference between medaling and missing out.

Since 2004, it is by all accounts widely used. A 2011 study of 20,000 urine samples from national and international competitions found that three out of four athletes used caffeine before or during competitions, with its use especially prevalent in running, swimming, cycling, and rowing.

Athletes don’t necessarily have to use drugs to get an edge. In a rather brazen move, at least one cyclist has recruited her bike to help her cheat. Belgian cyclist Femke Van den Driessche was found to have a concealed motor and battery in her bike in January 2016 at the Cyclocross World Championship, which was discovered by a modified MRI developed by the International Cycling Union (UCI), the sport’s governing body. The cyclist claimed that the bike belonged to a friend, but the UCI still banned Van den Driessche for six years from professional competitions.

Matthew Pioro, editor-in-chief of Canadian Cycling Magazine, tells the CBC that these devices can kick out 200 watts of power for an hour. “That’s 200 watts or more that you have later when it comes to a crucial part in the stage,” he says. “Or it helps you tap out a constant rhythm on a really long climb…These [cyclists] are such a high level. So sometimes it’s the littlest thing that can make a difference.”

The UCI suspects other cyclists are using similar devices and will be scanning bikes at future competitions using machines like the one that caught Van den Driessche.

(Incidentally, Van den Driessche is not the only member of her family in trouble with the sporting authorities. Her brother, Niels, is also a cyclist currently serving a suspension for doping, according to CyclingNews.com. And her father and brother “are facing criminal charges for trying to steal two expensive parakeets from the pet store De Gouldamandine in Varsenare,” the website noted.)

If your sport doesn’t involve equipment you can hack, like a bike, then maybe you can hack your body itself. Or at least that’s the thinking behind gene doping, which involves modifying athletes’ genes to give them a performance boost. Regulators are most worried about competitors inserting genes that create EPO, a hormone that makes the body produce more red blood cells. These in turn carry more oxygen to muscles, potentially boosting their output.

So far there’s no evidence that anyone has tried gene doping, but WADA is preparing for the possibility. The organization plans to collect blood during the Rio Olympics and test the samples for artificially inserted genes at some point in the future. The group had earlier planned to conduct tests just after the games, but the procedure hasn’t yet been approved by the agency.

As with meldonium, it’s not clear that EPO actually works; a recent study raises doubts. In the paper, which hasn’t yet been published, scientists gave 24 cyclists EPO and 24 a placebo for eight weeks, after which the groups biked equally well.

Testing at the Rio games has been more stringent than any previous Olympics.

For one thing, scientists have made improvements in analytical instruments, like mass spectrometers, that can detect long-term metabolites of the anabolic steroids metandienone, oxymetholone, and stanozolol, which previously went under the radar, according to Chemical and Engineering News. In the past, the metabolites of these could only be spotted for weeks after the drugs were taken, but now they can be sniffed out up to two months later, according to the publication. Athletes could presumably still benefit from taking a steroid, building muscle while using, and then quitting long enough to evade the longer-term testing, but the longer timeline does make it more difficult to get away with doping.

At Rio, samples will also be stored for future testing, which helps to uncover cheats. Scientists at the EuroScience Open Forum conference, held in late July in Manchester, England, reported retesting blood and urine samples from Beijing’s 2008 Olympics and London’s 2012 games. After they were collected, 1 percent of those materials failed drug tests at the time; upon re-testing, 8 percent of the samples showed evidence of a banned substance, according to Chemical and Engineering News. That’s a “sensational” increase in positive samples, says Arne Ljungqvist, a past Olympian and former WADA vice president. As-yet undeveloped tests will likewise help to catch more of today’s cheaters in the future.

For instance, scientists are already devising clever ways to uncover gene doping, should the idea ever become real. Researchers from Johannes Gutenberg University of Mainz, in Germany, and SUNY Stony Brook have created a test to look for viruses that dopers would use to insert the EPO gene into muscle or kidney cells.

Considering the stakes—the fame, the money, the glory—the game of scientific cat-and-mouse will not be stopping anytime soon.

Douglas Main is a journalist who lives in New York City and whose writing has appeared in the New York Times, Popular Science, Smithsonian.com, Discover Magazine, Popular Mechanics, and elsewhere.

The lead photograph is courtesy of The Department for Culture, Media and Sport via Flickr.