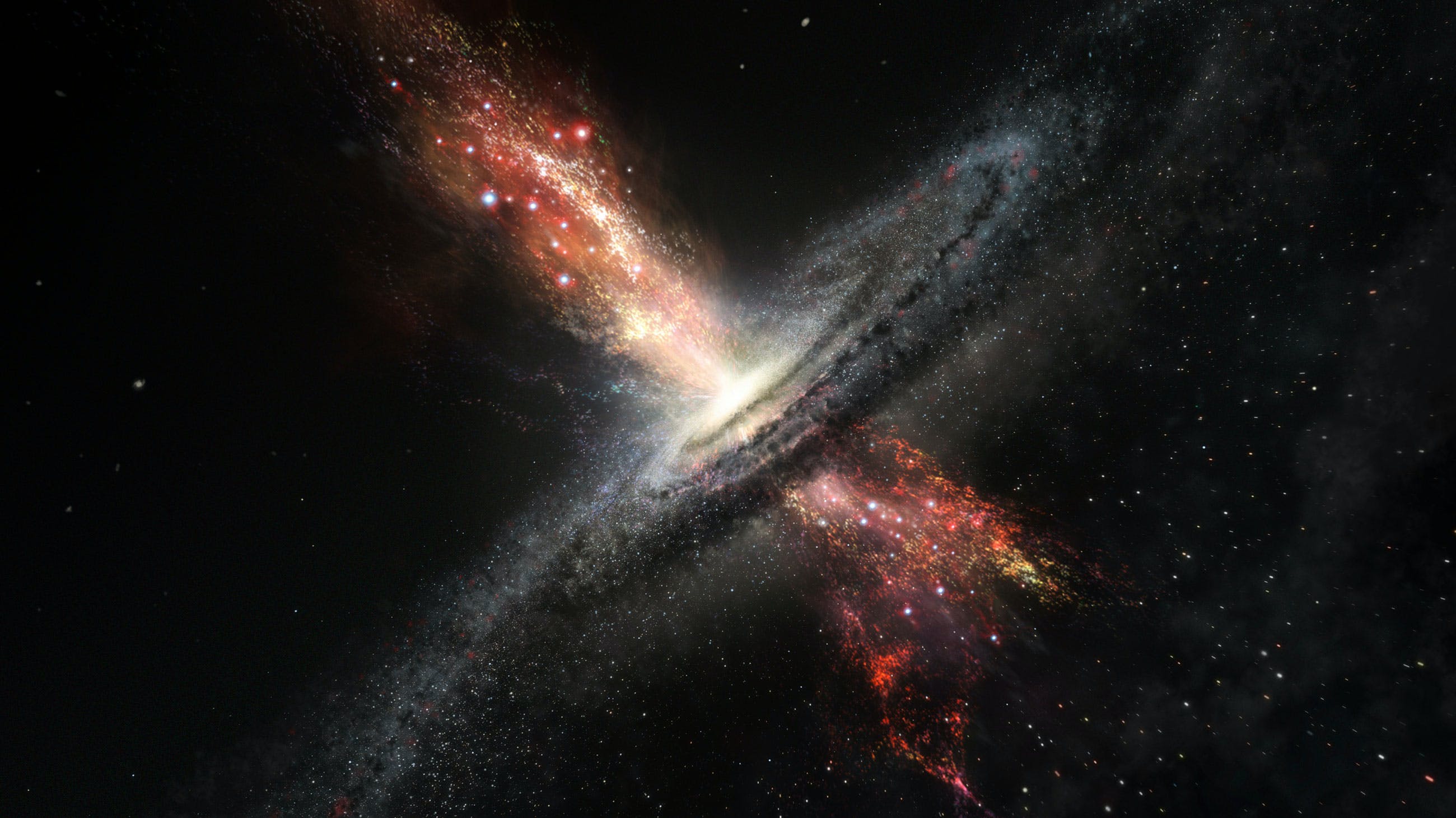 Even little galaxies have enormous black holes. That’s the takeaway from a new study of so-called dwarf galaxies—galaxies that are so small and dim that astronomers only know about the ones relatively nearby. What’s more, these black holes are somewhat explosive—engines powering strong jets of gas and radiation that stifle the galaxies’ growth.

“This is one of those things you’re hoping to find, and it came with thunder,” said Gabriela Canalizo, an astronomer at the University of California, Riverside, who led the research team. She and her colleagues found dwarf galaxies with black holes providing energetic feedback stronger even than they expected. The research has been submitted to The Astrophysical Journal.

Astrophysicists long thought that the largest galaxies (like our own Milky Way) had a monopoly on mammoth, active black holes, which often lurk in the galaxy’s center. Astronomers find them either by spotting the hard turns made by nearby stars, or by catching the glow that appears when gas and stars fall in, creating a radiation-spewing “active galactic nucleus.”

But the faintness and diminutive size of dwarf galaxies makes their black holes extremely tough to spot. While the Milky Way includes a couple hundred billion stars, dwarfs typically host only millions. Because they have few stars for astronomers to track, and little gas and dust to power active galactic nuclei, it was assumed that any black holes in dwarf galaxies would live up to their name and be too dark to find. “We think these things are there,” in part because some computer simulations predict them, said Jillian Bellovary, an astrophysicist at the American Museum of Natural History. “But they’re invisible.”

Not anymore. The researchers started their search by combing through the Sloan Digital Sky Survey, which is essentially a huge map of the northern night sky collected over many years of observation. They picked out 29 relatively close dwarf galaxies using two criteria. First, they looked for radiation in certain optical and infrared wavelengths that couldn’t come from stars alone—possible signs of an active galactic nucleus. Second, they picked out disk-shaped galaxies that had their saucer-like edges facing us. It’s easier to study the movement of gasses in those galaxies than in galaxies seen from the flat side.

They then used the giant Keck telescope in Hawaii for follow-up observations. Upon taking a closer look at the 29 candidate galaxies, they found 13 that showed evidence of oxygen ions missing two electrons—a telltale signal of an active galactic nucleus. They also determined that gas in these 13 galaxies was flowing out at speeds of up to 1,000 kilometers per second—fast enough for at least some gas to overcome the gravitational pull of the galaxy and erupt into intergalactic space.

Such powerful gas flows change what we know about the growth of these galaxies. Galaxies grow as clumps of gas collapse and form new stars. During this process, other stars die in supernova explosions, which can disrupt the star formation process and eject gas from the galaxy.

“We thought what regulated the growth of dwarf galaxies was supernova explosions,” said Mar Mezcua, an astronomer at the Institute of Space Sciences in Barcelona. But these massive black holes, in the form of active galactic nuclei, are far more powerful growth disruptors. “It could be that it happens like more massive galaxies,” where growth is dominated by huge central black holes and active galactic nuclei, she said.

The research also affects the standard view of how the largest black holes in the universe came to exist. Many astrophysicists, including Bellovary, think that such supermassive black holes grow when entire galaxies smash into each other, leading their central black holes to collide and form bigger ones. If dwarf galaxies host large black holes, collisions between these smaller galaxies might eventually lead to black holes of the supermassive variety, which can have the mass of billions of suns.

Tests of that idea might have to wait for the European Space Agency’s Laser Interferometer Space Antenna, or LISA. It’s designed to measure gravitational waves emanating from the impacts of smaller black holes, like those now known to inhabit dwarf galaxies. Its planned launch is still 15 years away.

Lead image: An artist’s impression of the winds created by a black hole at the center of a galaxy.  Credit:  ESO/M. Kornmesser