Detailed computer simulations have found that a cosmic contraction can generate features of the universe that we observe today. 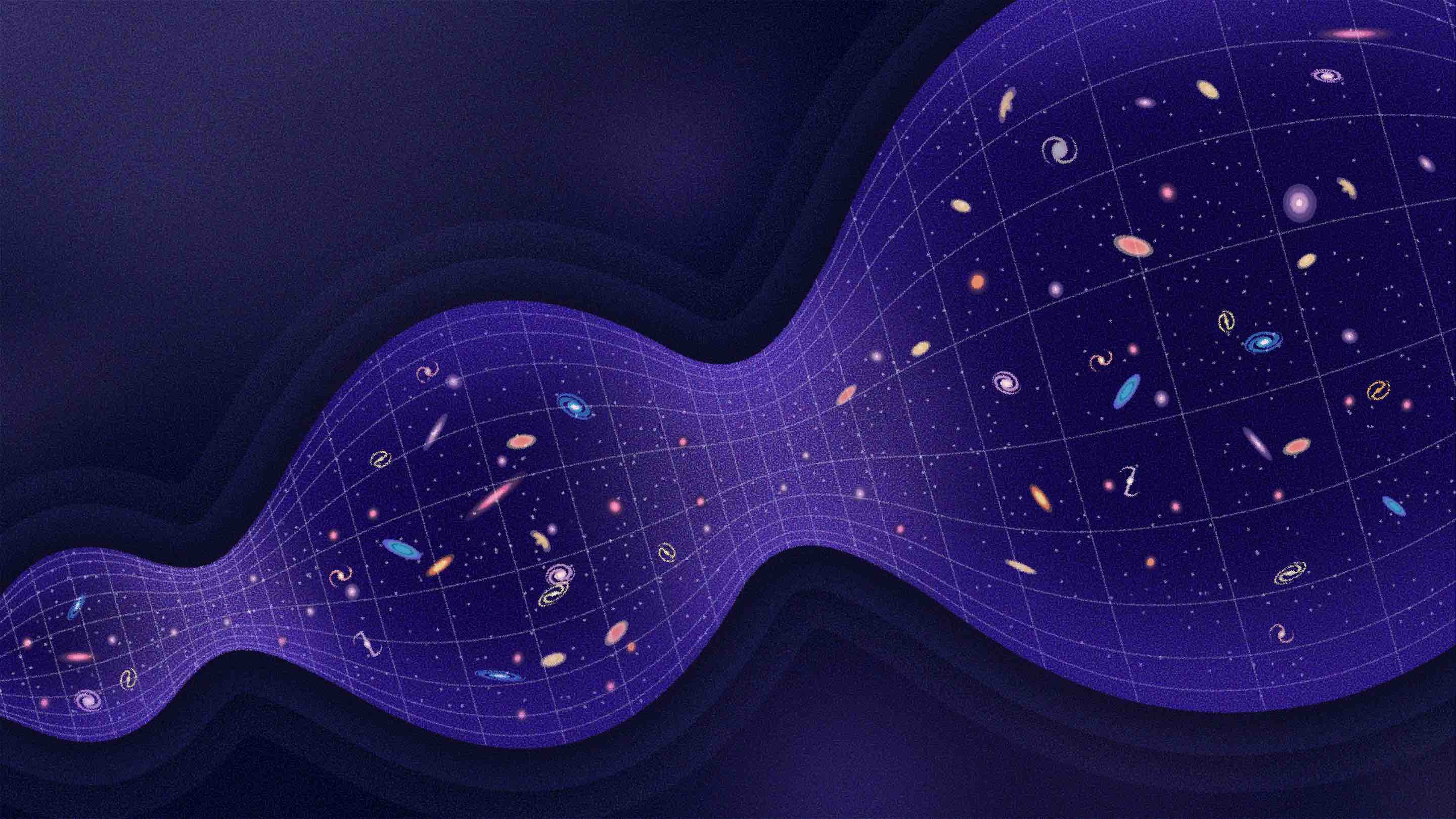 The standard story of the birth of the cosmos goes something like this: Nearly 14 billion years ago, a tremendous amount of energy materialized as if from nowhere.

In a brief moment of rapid expansion, that burst of energy inflated the cosmos like a balloon. The expansion straightened out any large-scale curvature, leading to a geometry that we now describe as flat. Matter also thoroughly mixed together, so that now the cosmos appears largely (though not perfectly) featureless. Here and there, clumps of particles have created galaxies and stars, but these are just minuscule specks on an otherwise unblemished cosmic canvas.

That theory, which textbooks call inflation, matches all observations to date and is preferred by most cosmologists. But it has conceptual implications that some find disturbing. In most regions of space-time, the rapid expansion would never stop. As a consequence, inflation can’t help but produce a multiverse—a technicolor existence with an infinite variety of pocket universes, one of which we call home. To critics, inflation predicts everything, which means it ultimately predicts nothing. “Inflation doesn’t work as it was intended to work,” said Paul Steinhardt, an architect of inflation who has become one of its most prominent critics.

In recent years, Steinhardt and others have been developing a different story of how our universe came to be. They have revived the idea of a cyclical universe: one that periodically grows and contracts. They hope to replicate the universe that we see—flat and smooth—without the baggage that comes with a bang.

To that end, Steinhardt and his collaborators recently teamed up with researchers who specialize in computational models of gravity. They analyzed how a collapsing universe would change its own structure, and they ultimately discovered that contraction can beat inflation at its own game. No matter how bizarre and twisted the universe looked before it contracted, the collapse would efficiently erase a wide range of primordial wrinkles.

“It’s very important, what they claim they’ve done,” said Leonardo Senatore, a cosmologist at Stanford University who has analyzed inflation using a similar approach. There are aspects of the work he hasn’t yet had a chance to investigate, he said, but at first glance “it looks like they’ve done it.”

Since early 2019, a fresh view of the cyclic, or “ekpyrotic,” universe has emerged from a collaboration between Steinhardt, Anna Ijjas, a cosmologist at the Max Planck Institute for Gravitational Physics in Germany, and others—one that achieves renewal without collapse.

When it comes to visualizing expansion and contraction, people often focus on a balloonlike universe whose change in size is described by a “scale factor.” But a second measure—the Hubble radius, which is the greatest distance we can see—gets short shrift. The equations of general relativity let them evolve independently, and, crucially, you can flatten the universe by changing either.

Picture an ant on a balloon. Inflation is like blowing up the balloon. It puts the onus of smoothing and flattening primarily on the swelling cosmos. In the cyclic universe, however, the smoothing happens during a period of contraction. During this epoch, the balloon deflates modestly, but the real work is done by a drastically shrinking horizon. It’s as if the ant views everything through an increasingly powerful magnifying glass. The distance it can see shrinks, and thus its world grows more and more featureless.

Steinhardt and company imagine a universe that expands for perhaps a trillion years, driven by the energy of an omnipresent (and hypothetical) field, whose behavior we currently attribute to dark energy. When this energy field eventually grows sparse, the cosmos starts to gently deflate. Over billions of years a contracting scale factor brings everything a bit closer, but not all the way down to a point. The dramatic change comes from the Hubble radius, which rushes in and eventually becomes microscopic. The universe’s contraction recharges the energy field, which heats up the cosmos and vaporizes its atoms. A bounce ensues, and the cycle starts anew.

In the bounce model, the microscopic Hubble radius ensures smoothness and flatness. And whereas inflation blows up many initial imperfections into giant plots of multiverse real estate, slow contraction squeezes them essentially out of existence. We are left with a cosmos that has no beginning, no end, no singularity at the Big Bang, and no multiverse.

From Any Cosmos to Ours

One challenge for both inflation and bounce cosmologies is to show that their respective energy fields create the right universe no matter how they get started. “Our philosophy is that there should be no philosophy,” Ijjas said. “You know it works when you don’t have to ask under what condition it works.”

She and Steinhardt criticize inflation for doing its job only in special cases, such as when its energy field forms without notable features and with little motion. Theorists have explored these situations most thoroughly, in part because they are the only examples tractable with chalkboard mathematics. In recent computer simulations, which Ijjas and Steinhardt describe in a pair of preprints posted online in June 2020, the team stress-tested their slow-contraction model with a range of baby universes too wild for pen-and paper analysis.

Adapting code developed by Frans Pretorius, a theoretical physicist at Princeton University who specializes in computational models of general relativity, the collaboration explored twisted and lumpy fields, fields moving in the wrong direction, even fields born with halves racing in opposing directions. In nearly every case, contraction swiftly produced a universe as boring as ours.

“You let it go and—bam! In a few cosmic moments of slow contraction it looks as smooth as silk,” Steinhardt said.

Katy Clough, a cosmologist at the University of Oxford who also specializes in numerical solutions of general relativity, called the new simulations “very comprehensive.” But she also noted that computational advances have only recently made this kind of analysis possible, so the full range of conditions that inflation can handle remains uncharted.

“It’s been semi-covered, but it needs a lot more work,” she said.

While interest in Ijjas and Steinhardt’s model varies, most cosmologists agree that inflation remains the paradigm to beat. “[Slow contraction] is not an equal contender at this point,” said Gregory Gabadadze, a cosmologist at New York University.

The collaboration will next flesh out the bounce itself—a more complex stage that requires novel interactions to push everything apart again. Ijjas already has one bounce theory that upgrades general relativity with a new interaction between matter and space-time, and she suspects that other mechanisms exist too. She plans to put her model on the computer soon to understand its behavior in detail.

The group hopes that after gluing the contraction and expansion stages together, they’ll identify unique features of a bouncing universe that astronomers might spot.

The collaboration has not worked out every detail of a cyclic cosmos with no bang and no crunch, much less shown that we live in one. But Steinhardt now feels optimistic that the model will soon offer a viable alternative to the multiverse. “The roadblocks I was most worried about have been surpassed,” he said. “I’m not kept up at night anymore.”

Lead image: In a cyclic universe, periods of expansion alternate with periods of contraction. The universe has no beginning and no end. Credit: Samuel Velasco/Quanta Magazine

Editor’s note: Some of this research was funded in part by the Simons Foundation, which also funds this editorially independent magazine. Simons Foundation funding decisions play no role in our coverage. More details are available here.