An unearthed fossil and genomic discoveries are filling important gaps in scientists’ understanding of how primitive green algae eventually evolved into land vegetation. 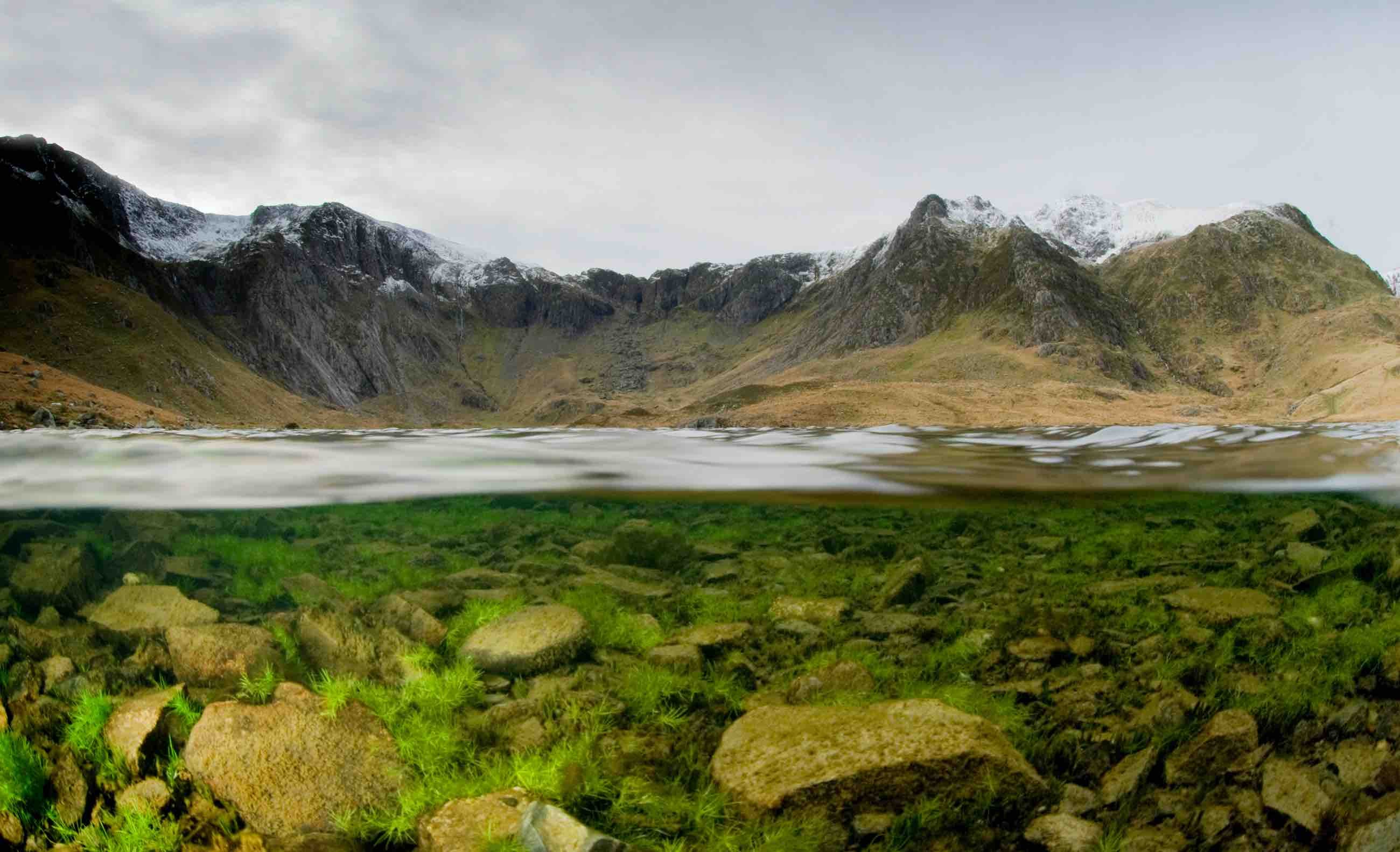 Around 500 million years ago—when the Earth was already a ripe 4 billion years old—the first green plants appeared on dry land. Precisely how this occurred is still one of the big mysteries of evolution. Before then, terrestrial land was home only to microbial life. The first green plants to find their way out of the water were not the soaring trees or even the little shrubs of our present world. They were most likely soft and mossy, with shallow roots and few of the adaptations they would later evolve to survive and thrive on dry land. And though scientists agree that these plants evolved from some kinds of seaweed, we know comparatively little about those green algal ancestors.

But a few papers from early 2020—two based on molecular biology, and one on rare, precious fossils from 1 billion years ago—are helping to fill in the gaps in our understanding of those ancient algae and what allowed them to eventually make the transition to land.

While fossils of land plants are abundant, ancient seaweed fossils are rare. To survive out of water, plants developed sturdy vascular systems and strong cell walls. Those same characteristics make for excellent preservation in fossils. “Most algae are little squishy things; they don’t form a skeleton. The first land plants had to have some sort of mechanical support,” said Shuhai Xiao, a professor of geobiology at the Virginia Polytechnic Institute and State University. “Overall, their material is much stronger than seaweed.”

The recently unearthed tiny fossil, smaller than a single grain of rice, appears to be the world’s oldest known specimen of green algae: It rolls back the clock on the confirmed existence of these algae by a staggering 200 million years. “It’s very daunting. A billion years—that’s at least five times older than the oldest dinosaurs,” said Xiao, who is a senior author on the Nature Ecology & Evolution paper that announced the discovery. “It’s before any animals. The world is very, very different from what we know today.”

Qing Tang, a postdoctoral researcher in Xiao’s lab and the first author on the study, has made it his mission to seek out billion-year-old rocks all over the world. He’s interested in one of the critical steps in the evolution of complex life: how cells became eukaryotic, with different internal compartments rather than free-floating cell contents. “I’m interested in the question of how eukaryotes evolved in the early stages on the Earth,” Tang said. “To answer that question, we have to look for very old rocks.” He excavated some from formations near the city of Dalian in northern China, where geological maps had told him he was likely to find the green-hued rocks containing fossils from that remote epoch. But it wasn’t until he got back to the lab and examined them under an electron microscope that he understood the value of what he had found: “I was very excited when I saw the first piece of this green seaweed,” he said. “These kinds of fossils are totally new to science.

Ancient as the fossilized algae are, they seem to have many of the characteristics also seen in much later green seaweeds. It isn’t just that they were clearly photosynthetic and multicellular—traits that help to define seaweeds but have murky evolutionary origins. “They have leaves, they have branches,” Tang said.

Before Tang’s find, the oldest known green algae fossil was only around 800 million years old. Because that fossil is fragmented and poorly preserved, not all scientists agreed that it was a piece of green algae immortalized in rock; the uncertainty left the early history of seaweeds in doubt. The new fossils from Dalian have weathered their billion-year existence more successfully. “We [are] more confident to interpret them as seaweed,” Tang said, “and they [are] more convincing for other scientists.”

But there is still room for doubt. Charles Delwiche, a biologist at the University of Maryland, says the fossils are most likely green algae, but he isn’t fully convinced. “The fossil record is difficult to interpret,” he said. “We don’t know what there is out there that has gone extinct.”

Andrew Knoll, a professor of natural history at Harvard University, expressed similar reservations. “It is quite possible that the fossils reflect an extinct, early branching group,” he said in an email. “Various forms of multicellularity have evolved repeatedly within the greens, so such an interpretation isn’t a stretch.”

The evolutionary innovations seen in Tang’s fossil may have helped to set algae on a path that eventually led them ashore by about 470 million years ago. But the transition to land life would probably have begun hundreds of millions of years earlier, with green algae adapting to survive in damp soil or sand that was subject to temporary drying. Evolutionary biologists have generally believed that this transformation probably arose in parallel with the appearance of more complex multicellular structures, some of which lent themselves to these adaptations.

But evolution is not always a steady march forward. “Historically people have always assumed that evolution is a linear process—it keeps getting more and more complex. That’s been debunked time and time again, but it still permeates our thinking,” said Gane Ka-Shu Wong, a biologist at the University of Alberta.

In a paper from November 2019 in Cell, Wong, Michael Melkonian of the University of Duisberg-Essen in Germany, and their colleagues showed through genetic analysis that the closest living relatives to land plants are a mossy freshwater species known as Zygnematophyceae. Although these green algae are most often unicellular, they must have shared an ancestor with land plants: They have many genes in common that are crucial for survival on land, including some that confer resistance to drying out and some for synthesizing a cell wall. These commonalities suggest not only that many of the adaptations to dry land were gained before plants moved ashore, but also that some complex ancestral features were lost by the pond species over time when they ceased to be useful. “Evolution can be two steps forward, one step backward,” Wong said.

In a commentary on Wong and Melkonian’s paper in Current Biology, Philip Donoghue and Jordi Paps of the University of Bristol expand on the argument that many of the plant genes that look like adaptations to life on land seem to have much deeper histories and may have served different functions in algae originally. “Though the comparatively simple Zygnematophyceae may be the immediate relatives of the land plants, they are descended through simplification from more complex … ancestors whose body plans and genomes were assembled in deeper … ancestors,” they wrote.

In fact, some of those genetic histories may reach beyond algae: The Cell paper showed that the genes for surviving the stresses of desiccation may have originally come from soil bacteria and been donated to Zygnematophyceae (or their ancestors) through horizontal transfer.

In a separate study published in Current Biology of February 2020, Paps, together with Alexander Bowles and Ulrike Bechtold of the University of Essex, compared the genomes of more than 200 living plants and used them to construct an evolutionary tree of their deep ancestry. In mapping the tree, they pinpointed when various genes emerged, and in the process they identified two bursts of extraordinary genomic novelty.

The second one, which seems to have occurred when algae were beginning to make the transition to terrestrial life, produced genes for adaptive features such as ultraviolet-light protection and the ability to form a root system and interact with terrestrial microbes. A much earlier burst occurred while the algae were still fully underwater and making the transition from unicellularity to multicellularity.

The discovery of that earlier burst shows some of the difficulties in unifying the billion-year-old fossils and the genetic results into a single, simple timeline of green plants’ evolution. To Tang and Xiao, the physical characteristics in the fossils suggest that species was a chlorophyte, one of the two main lineages of green algae—but not the one that most scientists think produced land plants. “It’s like we are talking about the granduncle of the land plants,” Xiao said. That ancient algae specimens therefore seem to have evolved their multicellular, complex structure earlier and independently of the burst of genetic creativity that Paps and his colleagues deduced from reconstruction.

This isn’t entirely surprising, because multicellularity has evolved many times in different lineages. In fact, most experts agree that many of the features in early green algae could have evolved independently more than once in a phenomenon known as convergent evolution. “There are only so many ways to do something,” said Susannah Porter, a biologist at the University of California, Santa Barbara.

The discrepancy may therefore highlight the real lesson to take away from these discoveries: Any confident statement about exactly when and how the ancestors of land plants evolved may always involve an oversimplification of the zigzagging path that evolution often takes. “There’s no reason to think that algae in all these millennia just went in a straight line,” said Wong. “It just doesn’t work that way.”

Lead image: Green algae grow at the edges of a glacial lake in Wales. Hundreds of millions of years ago, similar algae adapted to survive temporarily outside of the water may have kicked off the evolution of green land plants. Credit: Graham Eaton / NPL / Minden Pictures