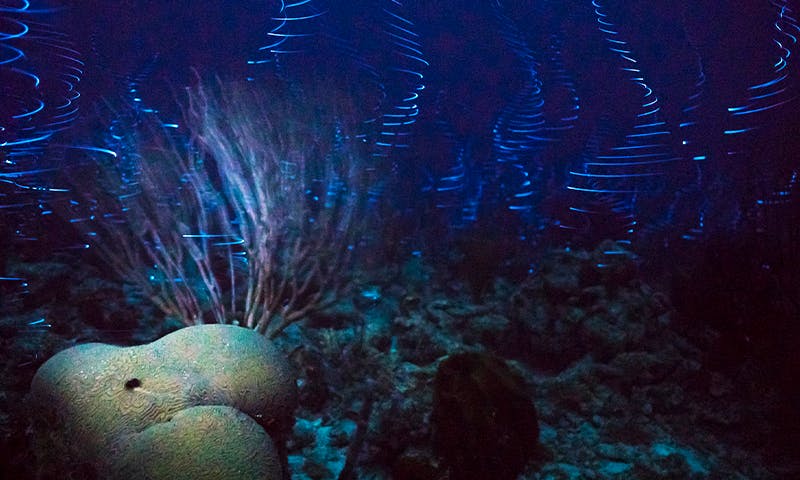 Imagine being a 22-year-old woman, wondering where new species come from. Imagine this question, burning brightly in your mind, has drawn you to the Florida Keys. One night, you pile into a boat with your graduate school advisor and some labmates, head for open water, and cut the lights. You adjust your snorkel mask, tip your face into the Caribbean Sea, and stare downward.

You wait. Fear prickles your body: The ocean is vast, the pitch blackness that surrounds you disorienting. Did you pick the wrong spot? Did you get the time wrong?

Then an array of arcs, swirls, and flashes so dense that it is difficult to tell where one light ends and another begins. “All of a sudden, it was like this whole show that was happening,” says Emily Ellis, now a molecular biologist at a biotech company in California, who was once the 22-year-old student in question. “It seemed like it was happening just for us.”

But the show was not for Ellis and her companions. It was a mating display of grain-of-sand-sized crustaceans called ostracods. About half of the more than 300 species of ostracods in the world are capable of bioluminescence, meaning that chemical reactions in their bodies produce light. And 75 bioluminescent ostracod species, found only in the Caribbean, use the light in their mating displays.

Specifically, just after dusk on dark nights, male ostracods spew bioluminescent mucus from their mouths into the water to attract females. What transfixed Ellis that night was essentially a Moulin Rouge sign of glowing vomit.

Each species emits light in its own distinctive pattern of dots, dashes, descending arcs, ascending lines, squiggles: a Morse code of diverse desires. In some parts of the Caribbean, half a dozen or more species inhabit the same waters and display at the same time, yet females seem to have no trouble picking out their own kind.

And it turns out that bioluminescence is more than just a passing spectacle. It can help illuminate the whole grand pageant of evolution.

Bioluminescence has evolved independently at least 94 times, in bacteria, mushrooms, jellyfish, fireflies, shrimp, octopuses, brittle stars, and more.1 The tree of life is spangled with twinkle lights. One conspicuously dark branch: our own. Plenty of fish bioluminesce, but the phenomenon is unknown among terrestrial vertebrates.

“The fact that bioluminescence has evolved so many times separately indicates that it’s not that hard to do biologically, even though it’s surprising to us” because of our own lack of light from within, says Todd Oakley, an evolutionary biologist at the University of California in Santa Barbara, who was Ellis’s Ph.D. advisor.

Bioluminescence is especially important to life in the sea, where animals use self-produced light to avoid predators, find or lure prey, or attract mates. Of the 700 groups, or genera, of animals who are known to contain bioluminescent species, 80 percent inhabit the ocean.

By searching creatures’ DNA for clues to when different lineages diverged from each other, scientists have found hints that, at least in certain animals, the capacity to produce light is very old.2 Bioluminescence evolved in fish as early as 150 million years ago, and in ostracods almost 50 million years before that.3 A diorama of The Ancient Seas ought to be as illuminated as a Medieval manuscript.

Bioluminescence may have helped marine life move into and thrive in deeper waters. From our four-limbed, air-breathing vantage point, the transition to life on land seems like a key moment in evolution: the ancestor fish heroically crawling out of the water on its fins. But maybe the movement of life in the opposite direction is an equally compelling story, with creatures lighting their own way into the deep.

The usefulness of self-made light in a dark environment may not completely explain why so many species in the sea are bioluminescent, though. Bioluminescence itself makes more species. Over the past decade or so, multiple studies have shown that when animals harness bioluminescence to communicate among their own kind, especially in courtship displays, the result is a burst of speciation that evolutionary biologists call radiation.

One team of ichthyologists and taxonomists showed that among fish, groups who bioluminesce in species-specific patterns—for example, with light organs scattered across their bodies in slightly different locations from one species to the next, perhaps enabling the fish to recognize others of their own kind—have more species and faster speciation than related groups who use bioluminescence for camouflage or to lure prey.4

What happens before and after bioluminescent courtship evolves remains shrouded in mystery.

Ellis and Oakley found similar patterns in their own analysis. They looked across 10 different types of organisms, including insects, crustaceans, segmented worms, and octopuses as well as fish. Groups with bioluminescent mating displays, like the Caribbean ostracods, have more species and diverge into new species faster than related groups without bioluminescence.5 Groups who use bioluminescence to avoid predators don’t show the same increased rate of speciation. When sparks fly, speciation follows.

Evolutionary biologists had long suspected that traits involving sex appeal—like a peacock’s tail or an ostracod’s glowing vomit—drive increased rates of speciation and help explain biodiversity’s patterns, but it had been difficult to verify. It took bioluminescence to shed light on the question.

Even with these tantalizing portions of evolution’s luminous narrative revealed, the details of what happens before and after bioluminescent courtship evolves remain shrouded in mystery. Scientists suspect that bioluminescence does not originate as a courtship display but tends to be co-opted from systems that serve some other purpose, such as predator defense. But no one knows how a warning signal turns into a come-hither ploy.

Nor do scientists know exactly how the advent of bioluminescent courtship spurs lightspeed speciation. Chance probably has something to do with it: that is, chance variations in how males put on their light shows, and chance variations in how females perceive them, combining to sort otherwise similar creatures into different groups and fracturing the water column into a kaleidoscope of pleasures.

But other factors may be at play too—and, in any case, the features of courtship lights that are most important to females also remain poorly understood. A female ostracod in an aquarium, for example, will watch from the bottom of the tank as males bioluminesce near the surface, then launch herself upward when she spots something she likes. But we still don’t know exactly what she sees.

Lead image: In this long-exposure photo, an undescribed ostracod species performs their mating displays. Each trail of multiple lines is a single display caught through time—in life, each blurred streak appears as a delicate, ephemeral dot to the human eye, and each trail of streaks is more a string of twinkling lights that only last a few seconds each. Credit: Kyle McBurnie