Gary Marcus can’t understand why people are shocked when he calls the brain a computer. The 43-year-old professor of psychology at New York University, author of Kluge, about the haphazard evolution of the brain, and a leading researcher in how children acquire language, grins and says it’s a generational thing.

“I know there’s a philosophical school of dualism that says there’s some kind of spirit separate from body, which creates thought detached from the brain,” he says. “But for someone like me who grew up reading neuroscience and cognitive science, it’s unsurprising the brain is a computer. It’s how I’ve always understood it to be.”

Marcus’s most recent book, Guitar Zero, charts his quest to learn to play the guitar as he approached 40. It delves into the brain’s perpetual ability to learn new things, subverting the myth that our brains are practically cast in stone by middle age. In recent years, Marcus has been perplexed by the fact it’s nearly impossible to discern how the human brain differs from that of other primates. He details his insights in his bracing Nautilus essay, “Where Uniqueness Lies.”

We recently caught up with the ardent writer and professor, who speaks in sentences that race by like a Top Fuel dragster, in his NYU office. Below this video is a transcript. 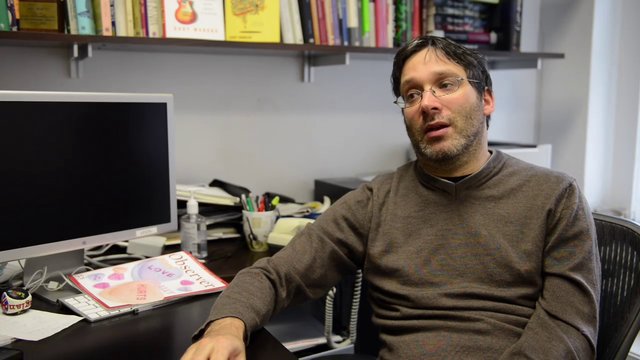 There are lots of people that get agitated when I say that. They say, “Hey, we’re creative, and machines aren’t, so therefore we must not be computers.” But that’s not a good argument. What a computer does fundamentally is it takes in information, it transforms that information, maybe connects it with some information in memory, and it builds an action based on that. Your iPhone is effectively a computer, your laptop is a computer, a pocket calculator—not that we have those anymore—those are all computers. But your brain is a computer too.

Well, that’s clearly true in the brain. It’s a lot of parallel processing but it’s not all parallel. Sometimes people think everything in the brain happens simultaneously, but there are some sequential things that happen step-by-step in the human brain. Language is outputted in a sequential way, word by word. Even though I talk fast, you know it’s still linear, one word at a time. So there are things that are linear and sequential in the human brain.

But we do a lot of parallel processing. That’s different from older computers, it’s not as different from newer computers. There are particular computations that we do very well that no one has figured out how to get a computer to do. We are better at learning language maybe because it’s integrated with a lot of real world knowledge. We are better at understanding common sense. So if I spill a cup of coffee, you don’t have to, as a human being, project every single individual molecule to tell me that it’s going to wind up on the floor, right? And for computers to do physics right now, we need to have complete information about every molecule. That’s very different from the way people view things. So there are different kinds of computations that we do. But you wouldn’t want to say that a Windows computer and a Macintosh computer aren’t both computers, just because they do different computations and have different operating systems. They both, at their core, do the same kinds of computations and they just get arranged in different ways.

What can a computer do better than the brain?

Computers can do lots of things better than brains. In fact, there’s an issue about whether 50 years from now there’ll be anything that brains can’t do better. But for now, computers are better at calculation and anything [involving] raw mathematics or anything requiring a lot of repetition. This is why you know accountants get replaced largely by machines. They’re simply better at repetitive calculation than humans. There’s no human that is ever going to be able to catch computers in that regard. This also means that computers can play chess better than all the people in the world, if you build the right kind of computer. My cell phone doesn’t quite have enough computational power to beat Gary Kasparov. But you can make a custom computer that can, and has in fact, beat him. So anything in pure computation, machines are going to be better.

There are some things we figured out how to build the software. And what’s interesting about that is similar things that machines do better than us, they do in ways that are like us. But they just do them more reliably. So you could teach a computer—this is a sort of fictitious example—but you could teach a computer to do long division the way that a human brain does. There are actually better ways to do it. But you could do it that way, and a computer would do it over and over again, never make a mistake, never forget to carry the one, and things like that. Whereas human beings, they’re not that reliable. They may get things right 90 percent of the time. So you could teach the computer to do it exactly the way that a person does, and it would just do it better because it’s more reliable.

Is the process by which infants develop language similar to how we program a computer to learn language?

Good question. Children learn language in what appears to be a very natural way without any explicit lessons, without any corrective feedback. They got a right or wrong, they mostly just listen to us. If Chomsky is right, if Steven Pinker is right, they have some internal machinery that helps them to zero in from that information onto the correct grammar. Chomsky phrase for it is “a language acquisition device.” Pinker calls it “a language instinct,” and I think they’re probably right. There is innate machinery that helps us to acquire language. Some of it may be special to language, which is what those guys have been suggesting, some of it may not be special to language. Some of it might be just general facts about how our memory works.

But either way, I think we’re born to learn language, and we do so in a pretty effortless way, and a pretty robust way. Which is to say that pretty much everybody learns language regardless of their environment.

So there are some things you have to be exposed to, like reading. If you’re not exposed to reading, you won’t learn, and if you don’t have explicit lessons, you probably won’t learn to read. It’s not universal across cultures, it’s not universal within our culture. Reading is a hard-won skill that we acquire, whereas language is something that happens pretty much automatically.

Now, when you look at machines trying to acquire language—and this is a project for places like Google and Microsoft and Apple and sort forth—the first thing to say is none of those guys have succeeded. So if you look at something like Google Translate, it works some of the time, and sometimes it comes back with things that don’t look at all like English. So it’s a really hard problem. I don’t mean to knock Google here. You know, Apple, Microsoft—all these guys are working on it. But nobody has really solved it. The techniques that they’re using are different. So when a child learns a language, what they’re doing, I think, is trying to connect, they’re kind of mind-reading, they guess about what you’re thinking about with their understanding about grammar. Machines for the most part are looking at lots of sentences, maybe looking at pairs of sentences, like something that’s in the English version of the Canadian parliament record, with something in the French, and matching them together. They don’t really have access in these machines to an understanding of the world that is that similar to what a child does. So I think there is certainly work to try to put in more semantics, more meaning, into these machines, as they acquire language. So nobody has really built a machine that I would say closely parallels the acquisition patterns of a child.

You say in 50 years we may be able to reverse-engineer the brain. Is that because we will have at one point discovered the calculations to produce cognition?

Well, that’s what we want to figure out. I mean everybody in cognitive neuroscience wants to figure out how the brain works. I mean, some of the work that’s actually done is crude. So instead of telling us how the brain exactly does its computation, we learn where it does its computation. So this will be sort of like trying to explain politics by saying, “Oh, it all happens in the Capitol building.” And it’ll be sort of true, and sort of not true, and not very useful. I mean, knowing where Congress is doesn’t tell you the power dynamics, right? So we’re sort of at that level right now. We know where the brain does its computations, we don’t know how it does those computations. But that’s what we’re all trying to figure out. We all want to know, What is the relation between what individual neurons do and how we actually behave? And again, there’s no reason in principle we can’t figure that out. But there are so many moving parts that it’s difficult to just sort of guess at it.

It’s actually a lot more complicated than, say, the structure of DNA, which was already a hard problem. But if you look at the structure of DNA, you’ve got the same molecule appearing in every cell, and you can do these neat crystallography techniques that yielded very clear results. I don’t want to say it was easy, or that I would have figured it out, but it’s a tractable problem. Figuring out how the brain works is a very, very complicated problem, where you know every neuron works differently, there’s lots of interdependence between different neurons. So it’s going to take a while.

But on the other hand, we know that the brain is where all the action is for human thought. We know if you injure parts of the brain then you change thinking. So there’s no question that the secrets to human thought do lie within the brain. It’s a question of what are the techniques and what are the theoretical insights that are going to allow us to unravel this puzzle.