How the architecture of the brain shapes its functioning. 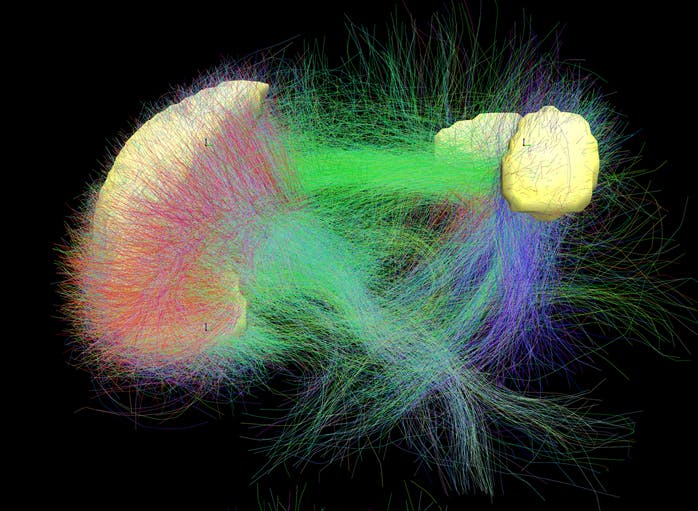 The structure of the human brain is complex, reminiscent of a circuit diagram with countless connections. But what role does this architecture play in the functioning of the brain? To answer this question, researchers at the Max Planck Institute for Human Development in Berlin, in cooperation with colleagues at the Free University of Berlin and University Hospital Freiburg, have for the first time analyzed 1.6 billion connections within the brain simultaneously. They found the highest agreement between structure and information flow in the “default mode network,” which is responsible for inward-focused thinking such as daydreaming.

Everybody’s been there: You’re sitting at your desk, staring out the window, your thoughts wandering. Instead of getting on with what you’re supposed to be doing, you start mentally planning your next holiday or find yourself lost in a thought or a memory. It’s only later that you realize what has happened: Your brain has simply “changed channels”—and switched to autopilot.

For some time now, experts have been interested in the competition among different networks of the brain, which are able to suppress one another’s activity. If one of these approximately 20 networks is active, the others remain more or less silent. So if you’re thinking about your next holiday, it is almost impossible to follow the content of a text at the same time.

To find out how the anatomical structure of the brain impacts its functional networks, a team of researchers at the Max Planck Institute for Human Development in Berlin, in cooperation with colleagues at the Free University of Berlin and the University Hospital Freiburg, have analyzed the connections between a total of 40,000 tiny areas of the brain. Using functional magnetic resonance imaging, they examined a total of 1.6 billion possible anatomical connections between these different regions in 19 participants aged between 21 and 31 years. The research team compared these connections with the brain signals actually generated by the nerve cells.

Their results showed the highest agreement between brain structure and brain function in areas forming part of the “default mode network,” which is associated with daydreaming, imagination, and self-referential thought. “In comparison to other networks, the default mode network uses the most direct anatomical connections. We think that neuronal activity is automatically directed to level off at this network whenever there are no external influences on the brain,” says Andreas Horn, lead author of the study and researcher in the Center for Adaptive Rationality at the Max Planck Institute for Human Development in Berlin.

Living up to its name, the default mode network seems to become active in the absence of external influences. In other words, the anatomical structure of the brain seems to have a built-in autopilot setting. It should not, however, be confused with an idle state. On the contrary, daydreaming, imagination, and self-referential thought are complex tasks for the brain.

“Our findings suggest that the structural architecture of the brain ensures that it automatically switches to something useful when it is not being used for other activities,” says Andreas Horn. “But the brain only stays on autopilot until an external stimulus causes activity in another network, putting an end to the daydreaming. A buzzing fly, a loud bang in the distance, or focused concentration on a text, for example.”

The researchers hope that their findings will contribute to a better understanding of brain functioning in healthy people, but also of neurodegenerative disorders such as Alzheimer‘s disease and psychiatric conditions such as schizophrenia. In follow-up studies, the research team will compare the brain structures of patients with neurological disorders with those of healthy controls.

This article was originally published by Max Planck Neuroscience on Nov. 11, 2016. The relevant study can be retrieved here.