A recent gamma-ray burst known as the BOAT—“brightest of all time”—appears to have produced a high-energy particle that shouldn’t exist. For some, dark matter provides the explanation. 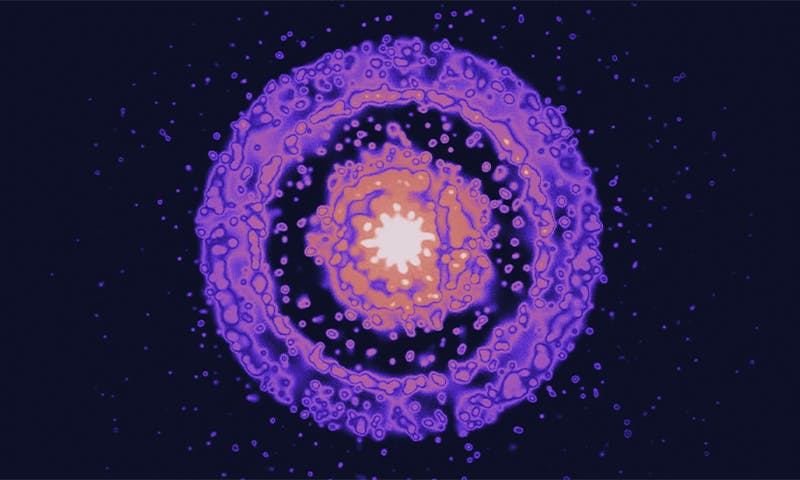 On Sunday, October 9, Judith Racusin was 35,000 feet in the air, en route to a high-energy astrophysics conference, when the biggest cosmic explosion in history took place. “I landed, looked at my phone, and had dozens of messages,” said Racusin, an astrophysicist at NASA’s Goddard Space Flight Center in Maryland. “It was really exceptional.”

The explosion was a long gamma-ray burst, a cosmic event where a massive dying star unleashes powerful jets of energy as it collapses into a black hole or neutron star. This particular burst was so bright that it oversaturated the Fermi Gamma-ray Space Telescope, an orbiting NASA telescope designed in part to observe such events. “There were so many photons per second that they couldn’t keep up,” said Andrew Levan, an astrophysicist at Radboud University in the Netherlands. The burst even appears to have caused Earth’s ionosphere, the upper layer of Earth’s atmosphere, to swell in size for several hours. “The fact you can change Earth’s ionosphere from an object halfway across the universe is pretty incredible,” said Doug Welch, an astronomer at McMaster University in Canada.

Astronomers cheekily called it the BOAT—“brightest of all time”—and began to squeeze it for information about gamma-ray bursts and the cosmos more generally. “Even 10 years from now there’ll be new understanding from this data set,” said Eric Burns, an astrophysicist at Louisiana State University. “It still hasn’t quite hit me that this really happened.”

The initial analysis suggests that there are two reasons why the BOAT was so bright. First, it occurred about 2.4 billion light-years from Earth—fairly close for gamma-ray bursts (though well outside of our galaxy). It’s also likely that the BOAT’s powerful jet was pointed toward us. The two factors combined to make this the kind of event that occurs only once every few hundred years.

Perhaps the most consequential observation happened in China. There, in the Sichuan province, the Large High Altitude Air Shower Observatory (LHAASO) tracks high-energy particles from space. In the history of gamma-ray burst astronomy, researchers have seen only a few hundred high-energy photons coming from these objects. LHAASO saw 5,000 from this one event. “The gamma-ray burst basically went off in the sky directly above them,” said Sylvia Zhu, an astrophysicist at the German Electron Synchrotron (DESY) in Hamburg.

Among those detections was a suspected high-energy photon at 18 teraelectron volts (TeV)—four times higher than anything seen from a gamma-ray burst before and more energetic than the highest energies achievable by the Large Hadron Collider. Such a high-energy photon should have been lost on the way to Earth, absorbed by interactions with the universe’s background light.

So how did it get here? One possibility is that, following the gamma-ray burst, a high-energy photon was converted into an axion-like particle. Axions are hypothesized lightweight particles that may explain dark matter; axion-like particles are thought to be slightly heftier. High-energy photons could be converted into such particles by strong magnetic fields, such as the ones around an imploding star. The axion-like particle would then travel across the vastness of space unimpeded. As it arrived at our galaxy, magnetic fields would convert it back into a photon, which would then make its way to Earth.

In the week following the initial detection, multiple teams of astrophysicists suggested this mechanism in papers uploaded to the scientific preprint site arxiv.org. “It would be a very incredible discovery,” said Giorgio Galanti, an astrophysicist at the National Institute for Astrophysics (INAF) in Italy, who coauthored one of the first of these papers.

Yet other researchers wonder if LHAASO’s detection might be a case of mistaken identity. Perhaps the high-energy photon came from somewhere else, and its just-right arrival time was simply a coincidence. “I’m very skeptical,” said Milena Crnogorčević, an astrophysicist at the University of Maryland. “I am currently leaning toward it being a background event.” (To further complicate matters, a Russian observatory reported a hit by an even higher-energy 251 TeV photon coming from the burst. But “the jury’s still out” on that, said Racusin, deputy project scientist on the Fermi telescope. “I’m a little skeptical.”)

So far the LHAASO team has not released detailed results of their observations. Burns, who is coordinating a global collaboration to study the BOAT, hopes they do. “I’m very curious to see what they have,” he said. But he understands why a degree of wariness may be warranted. “If I were sitting on data that had even a few percent chance of being defining proof of dark matter, I would be extraordinarily cautious at the moment,” said Burns. If the photon can be linked to the BOAT, “it would very likely be evidence of new physics, and potentially dark matter,” Crnogorčević said. The LHAASO team did not respond to a request for comment.

Even without LHAASO’s data, the sheer amount of light seen from the event could enable scientists to answer some of the biggest questions about gamma-ray bursts, including major puzzles about the jet itself. “How is the jet launched? What is going on in the jet as it is propagating out into space?” said Tyler Parsotan, an astrophysicist at Goddard. “Those are really big questions.”

Other astrophysicists hope to use the BOAT to ascertain why only some stars produce gamma-ray bursts as they go supernova. “That is one of the big mysteries,” said Yvette Cendes, an astronomer at the Harvard-Smithsonian Center for Astrophysics. “It has to be a very massive star. A galaxy like ours will maybe every million years produce a gamma-ray burst. Why does such a rare population make gamma-ray bursts?”

Whether gamma-ray bursts result in a black hole or a neutron star at the core of the collapsed star is also an open question. A preliminary analysis of the BOAT suggests that the former happened in this case. “There’s so much energy in the jet it basically has to be a black hole,” said Burns.

What is certain is that this is a cosmic incident that will not be eclipsed for many, many lifetimes. “We’ll all be long dead before we get the chance to do this again,” said Burns.