Cash for Math: The Erdős Prizes Live On

Paul Erdős placed small bounties on hundreds of unsolved math problems. Over the past 20 years, only a handful have been claimed. 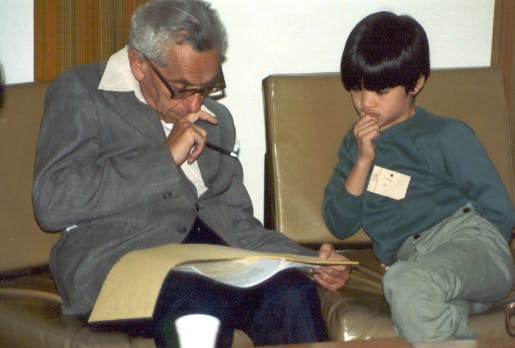 Most mathematicians will tell you they solve problems for the thrill of discovery. But sometimes the promise of a little pocket money doesn’t hurt.

My latest article, “A Puzzle of Clever Connections Nears a Happy End,” is about a breakthrough on the “happy ending” problem, which originated in the 1930s as a project among three young friends, two of whom went on to marry (hence the name).

The third mathematician involved, Paul Erdős, became perhaps the most notorious mathematician of the 20th century. Erdős spent nearly his entire life crashing on other mathematicians’ couches and subsisting on the small sums he received for giving talks at universities around the world. He also had a fondness for devising math problems and offering bounties to anyone who could solve them.

“Over the years it was kind of a habit he had to say, ‘Here’s a nice problem, I thought about it for a while, and I don’t see how to solve it. Maybe it’s a $25 problem or possibly a $100 problem,’” said Ronald Graham, a mathematician at the University of California, San Diego, and a longtime friend of Erdős’.

In offering small prizes, Erdős was continuing a tradition that flourished in Poland in the early 20th century in cafés where young mathematicians gathered to match wits and push against the frontiers of mathematics. Here is how the Italian mathematician Gian-Carlo Rota described the scene in his essay “The Lost Café”:

Between a shot of brandy and a cup of coffee, they would pose (and often solve) what turned out to be some of the outstanding mathematical conjectures of their time, conjectures that would be dashed off on the marble of coffee tables in the late evenings, in loud and uninhibited brawls.

In that culture, it was also common for mathematicians to back a newly posed problem with a prize—a bottle of wine or a nice meal to whoever could pull the sword from the stone.

Erdős continued that tradition. Over the course of his lifetime he offered rewards for hundreds of problems that he himself dreamed up. Amounts ranged from $25 into the thousands, depending on how challenging he thought the problem was. Today Graham controls a small fund left by Erdős, who died in 1996, for the purpose of making good on those bounties.

In 1974 Erdős paid off his first major sum: $1,000 to the Hungarian mathematician Endre Szemerédi for a problem Erdős had posed some years earlier. Szemerédi tackled the problem because “he said he could certainly use the money,” said Graham. Decades later Szemerédi would win the Abel Prize, commonly regarded as the Nobel of mathematics, for work that stemmed primarily from his solution to this Erdős problem.

More recently, Erdős (or rather, his surviving funds) helped pay off a $10,000 prize to the mathematicians James Maynard, Ben Green, Kevin Ford, Sergei Konyagin, and Terry Tao for proofs related to gaps between consecutive prime numbers. (Graham said that even when Erdős first offered the $10,000 prize, he regarded the amount as a perhaps a bit “rash.” In fact, Graham himself ended up contributing $5,000.)

In 1998 Graham and his wife, the mathematician Fan Chung, wrote “Erdős on Graphs: His Legacy of Unsolved Problems,” a book that collected about 200 Erdős problems in the field of graph theory. (Erdős also posed many problems in number theory, but no one has collected those in a central place.)  Since then, Graham and Chung have had to pay off on only three.

The happy ending problem comes with a $500 bounty, and the new result comes very close to proving the exact conjecture from the 1930s. Graham said that he admires this new work and would like to reward it somehow. But a near-proof of a conjecture is very different from a full proof, and it’s a referee’s job to make hard calls. “If I give a prize for this, it’s hard to know where to draw the line,” Graham said.