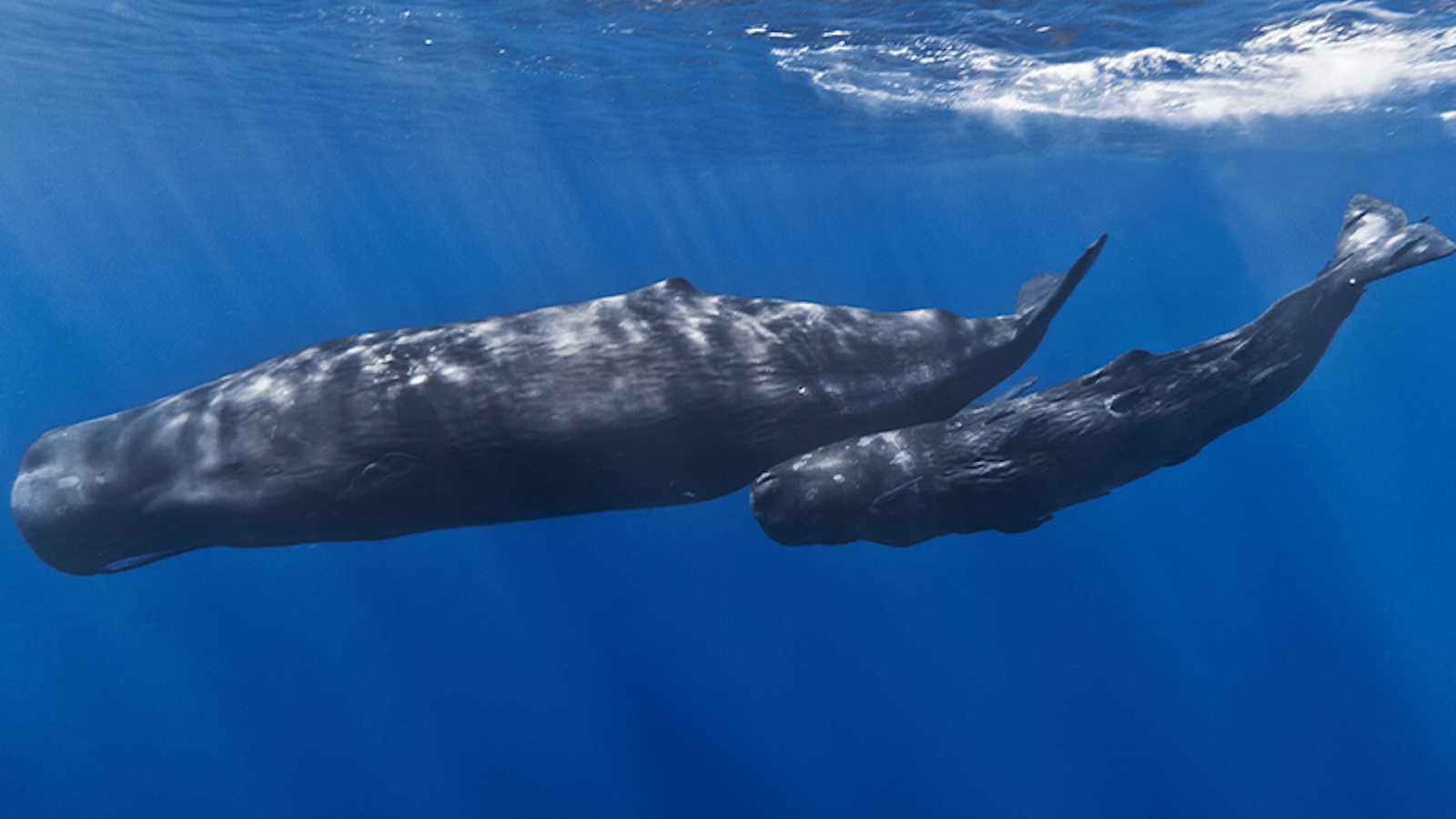 In the moments before she dives, a sperm whale hangs over the dark abyss of the deep ocean and, with her voice, reaches out to her kin. She speaks in what are called codas: sets of clicks that, like the bundled taps of Morse code, each have some meaning to the whales. But before she plunges, this whale exchanges a special type of coda with her sisters and cousins, one that you won’t hear used the same way by any other clan.

Scientists call these special clicks identity codas: markers that the whales seem to use to signal what clan they belong to. If they work the way researchers think, it would suggest that the whales have some grasp of what anthropologists call “symbolic marking,” when a trait or object is used as a symbol of group membership. This is a hallmark of human culture.

“These are very specific codas that are unique to clans,” explains Taylor Hersh, a postdoctoral researcher at Dalhousie University and the lead author of a recent study mapping the identity codas of Pacific sperm whales.1 “Those whales in one clan will make a lot of them, but whales in other clans hardly ever make them—creating the idea for us that they are an identity cue.”

Sperm whales are highly social creatures, with females and their young living in stable units of five to 10 individuals who travel, hunt, rest, and parent together. These units in turn belong to an extended clan which can comprise thousands of individuals who all keep to the same territory—areas that can be as small as the coastal waters of a single island or as large as ocean basin, and which can overlap with the range of other clans.

More important than a clan’s physical extent, however, is its cultural currency: Clan members all share distinct social behaviors and vocalizations. These vocal communications are rich and varied; researchers have documented dozens of different types of codas, some of them made by sperm whales everywhere and others—like those in the new study—made primarily by one clan.

New insight into these cues came when sperm whale researchers around the world started sharing their recordings with each other, creating a huge dataset that could then be analyzed. Hersh led the first effort to examine recordings from the Pacific, using software created in collaboration with her postdoctoral advisor, whale researcher Hal Whitehead.

The more sperm whale clans overlap territorially with each other, they found, the more distinct their identity codas appear to be. This is particularly intriguing because the same pattern appears among humans.

“Think of uniforms. Think flags—things that denote cultural membership,” says Adrian Bell, an anthropologist at the University of Utah who studies cultural evolution. These human examples of symbolic markers are more common in areas of potential conflict, Bell says, such as during war, or in neighboring gang territories—or, on the less extreme side, in cities with competing sports teams. “They help us know the boundaries, where it’s very important for people to know who you are and for others to know you in your own group,” Bell says.

Symbolic markers also extend to language. Bell noted that you can hear symbolic markers appear and disappear when you observe a person code switching, while Hersh gave an example from her hometown of Pittsburgh, where the word “yinz” is uniquely used as a second-person pronoun in place of a word like “y’all.” While someone using “y’all” could be from a large swath of the United States, someone who uses “yinz” is unmistakably from Pittsburgh. Identity codas seem to work the same way, allowing a sperm whale to rapidly distinguish between “us” and “them.”

Finding these markers is another step in the decades-long realization that these whales might lead lives as rich and complex as our own. In the early 2000s, Whitehead and his collaborator Luke Rendell, now at the University of St. Andrews in Scotland, observed that sperm whales off the Galapagos Islands formed clans with distinct behaviors and life histories.2 DNA tests showed no genetic difference between the clans, suggesting that these behaviors were not hereditary but instead passed down through social teaching and learning.

It was the first firm evidence of what Whitehead had long suspected: that these groups of whales each had their own cultures. Whitehead also noticed the presence of these clans’ distinct codas, and speculated that there might be some cultural significance to them. But there wasn’t yet enough data available to spot the patterns that might support this.

These whales might lead lives as rich and complex as our own.

Once the program had mapped the Pacific clans, a pattern became clear. Identity codas became less similar as spatial overlap increased between clans—a pattern that they did not see among other, non-identity-related codas. This suggests that sperm whales, much like humans, like to stick with others who are similar to them, and that more distinctive calls in shared territories prevent confusing a stranger with a friend.

Hersh and Whitehead caution that further research is needed to be sure that identity codas work as they think. Ideally, they would play recordings of various identity codas back to sperm whales and observe their reactions: Moving toward the codas of their own clan, but away from those of neighboring clans, would support the symbolic marking theory.

However, these experiments can be difficult. The suction cup-attached tags used to track whale behaviors can easily be knocked off when whales breach or rub up against each other, or detach while the whale is far out to sea—making it difficult for researchers to then collect them. And even when tags cooperate, Whitehead says his colleagues have had mixed success convincing the whales to react to recorded whale sounds.

“Sperm whales make the loudest sound on Earth, and they have the biggest brain on Earth, and I suspect quite a bit of that is devoted to dealing with acoustic information,” he says. “My feeling is, instead of the whale thinking there’s a new whale here from my clan or another clan, they’re thinking, ‘There’s the bloody humans pretending to be us and doing it rather poorly.’”

There are known conservation implications to sperm whales’ discrete clans. Whitehead gave the example of Dominica and Martinique: Though these Caribbean islands are just 25 miles apart, Dominica—whose waters are the primary territory of the EC2 clan—has no legal protections for sperm whales, while Martinique—the home waters of the EC1 clan—is surrounded by a marine sanctuary with stringent protections for marine mammals. Because clans don’t interbreed, this could leave the EC2 clan and its distinct culture at greater risk if these whales were faced with some new stress, such as when El Niño years make prey harder to find.

But while the existence of symbolic markers in sperm whale communication might reinforce these conservation needs, the true implications may be more philosophical than practical. To Hersh, Bell, and Whitehead alike, this is yet more evidence that many of the capacities that allegedly make humans unique, or are construed as raising us above other animals, are in fact traits that we share.

“Sperm whales like ‘belonging.’ At the risk of anthropomorphizing them, they belong to a cultural group, and our paper is helping us better understand how they divide themselves,” Hersh says. “It tells us that the things that are important to us—like family, traditions, the ways we do things—seem to be important to the whales, too.”