An overlooked but powerful driver of cloud formation could accelerate the loss of polar sea ice. 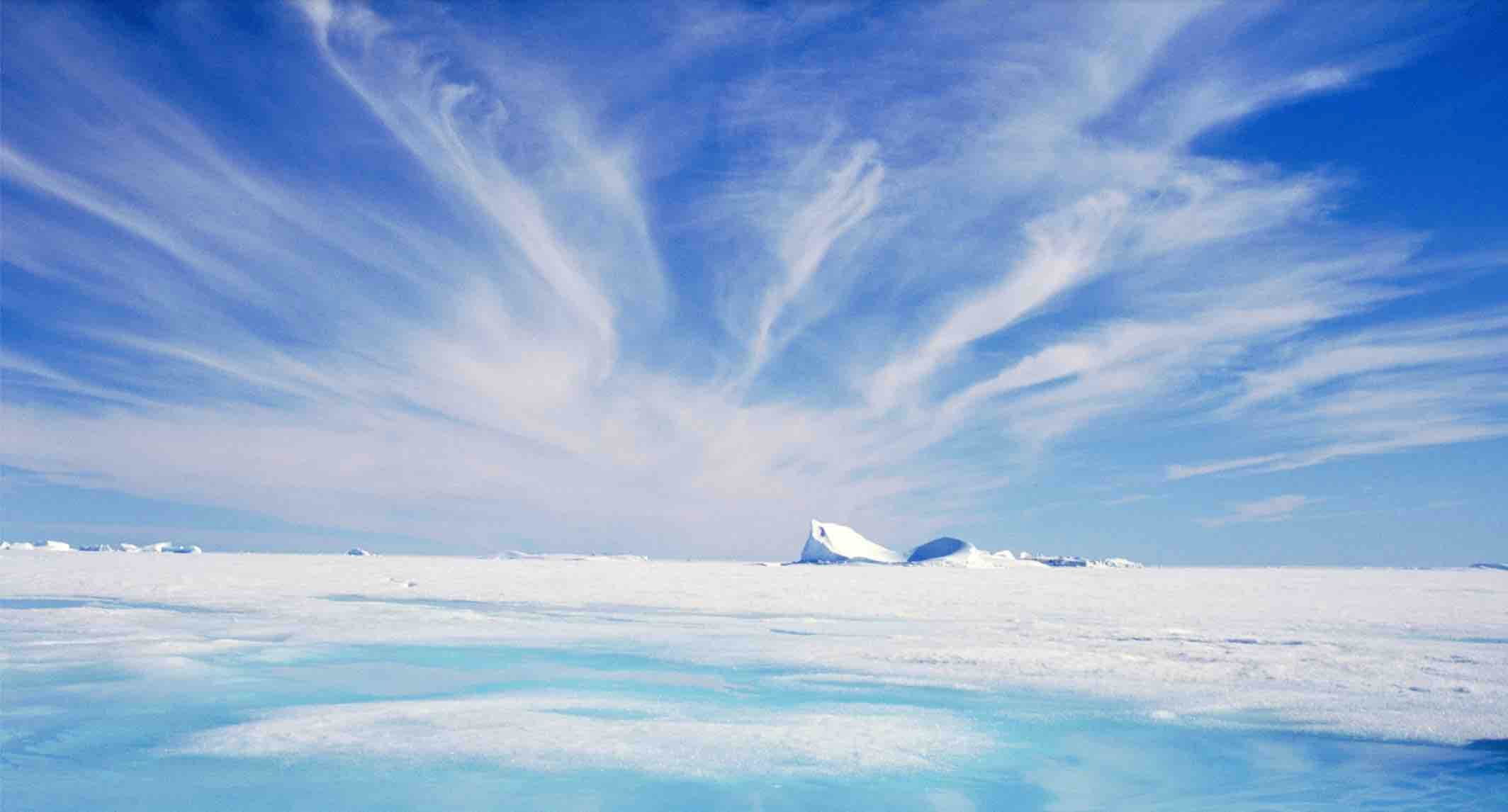 To climate scientists, clouds are powerful, pillowy paradoxes: They can simultaneously reflect away the sun’s heat but also trap it in the atmosphere; they can be products of warming temperatures but can also amplify their effects. Now, while studying the atmospheric chemistry that produces clouds, researchers have uncovered an unexpectedly potent natural process that seeds their growth. They further suggest that, as the Earth continues to warm from rising levels of greenhouse gases, this process could be a major new mechanism for accelerating the loss of sea ice at the poles—one that no global climate model currently incorporates.

This discovery emerged from studies of aerosols, the tiny particles suspended in air onto which water vapor condenses to form clouds. As described in a February 2021 paper in Science, researchers have identified a powerful overlooked source of cloud-making aerosols in pristine, remote environments: iodine.

The full climate impact of this mechanism still needs to be assessed carefully, but tiny modifications in the behavior of aerosols, which are treated as an input in climate models, can have huge consequences, according to Andrew Gettelman, a senior scientist at the National Center for Atmospheric Research (NCAR) who helps run the organization’s climate models and who was not involved in the study. And one consequence “will definitely be to accelerate melting in the Arctic region,” said Jasper Kirkby, an experimental physicist at CERN who leads the Cosmics Leaving Outdoor Droplets (CLOUD) experiment and a coauthor of the new study.

Just as dew condenses onto blades of grass, water vapor in the atmosphere can condense around aerosols to create clouds. Two types of aerosols can act as cloud condensation nuclei (CCNs): primary aerosols, which can be tiny particles of almost any kind, such as bacteria, sand, soot or sea salt spray; and secondary aerosols, which are trace gases that participate in a process known as “new particle formation.” If the atmospheric conditions are right, sunlight and ozone can set off a chain reaction that causes secondary aerosols to clump together and rapidly snowball into a particle with more than a million molecules.

Yet details of which chemicals end up becoming CCNs and how exactly it happens have largely remained a mystery, even though the particles composed of secondary aerosols are thought to make up more than half of all CCNs. With more CCNs, clouds tend to be longer-lasting, wider and more reflective—characteristics that can tangibly change the Earth’s temperature but that have been notoriously difficult to include in climate models, according to Charles Brock, a research physicist at the National Oceanic and Atmospheric Administration.

Scientists have observed this new particle formation process with gases such as sulfuric acid, particularly over urban areas, where the chemical is abundant, and hypothesize that smog arises largely as a result of new particle formation. But recent measurements have found that this process is not limited to anthropogenic chemicals—it may also occur in the atmosphere over wilder, less inhabited locations. “Two-thirds of the world’s surface is ocean,” Brock said. “Most clouds form over the ocean, so you really need to understand these processes in remote areas to be able to understand climate.”

Researchers have observed in remote areas of Ireland, Greenland and Antarctica that iodine, which is released naturally from melting sea ice, algae and the ocean surface, may also be a significant driver of new particle formation. But researchers still wondered how molecular iodine grows into a CCN, and how efficiently it does so, compared with other secondary aerosols. “Even though these particles were known to exist, we weren’t able to link a measured concentration in the atmosphere to a predicted formation of particles,” Kirkby said.

For answers, they turned to the CLOUD chamber at CERN, a giant aerosol chamber 3 meters wide and nearly 4 meters tall that tries to recreate the Earth’s atmosphere with extreme precision. (The chamber was originally constructed to investigate the possible link between cloud formation and galactic cosmic rays.) For eight weeks straight, more than two dozen scientists worked in eight-hour shifts around the clock, tweaking the temperature and composition of the artificial atmosphere in the chamber and anxiously watching what happened when iodine was added to the mix. The scientists could watch the particles evolving in the chamber in real time: “Literally, we’re watching it minute by minute,” Kirkby said. “It’s really a return to old-fashioned physics experiments.”

The CERN scientists found that aerosol particles made of iodic acid could form very quickly—even more quickly than the rates of sulfuric acid mixed with ammonia. In fact, the iodine was such an effective nucleator that the researchers had a difficult time scrubbing it away from the sides of the chamber for subsequent experiments, which required a completely clean environment.

The findings are important for understanding the fundamental chemistry in the atmosphere that underlies cloud processes, Kirkby said, but also as a warning sign: Global iodine emissions have tripled over the past 70 years, and scientists predict that emissions will continue to accelerate as sea ice melts and surface ozone increases. Based on these results, an increase of molecular iodine could lead to more particles for water vapor to condense onto and spiral into a positive feedback loop. “The more the ice melts, the more sea surface is exposed, the more iodine is emitted, the more particles are made, the more clouds form, the faster it all goes,” Kirkby said.

The results could also help scientists understand how much the planet will warm on average when carbon dioxide levels double compared with pre-industrial levels. For decades, estimates have put this number, called the equilibrium climate sensitivity, between 1.5 and 4.5 degrees Celsius (2.6 to 8.1 degrees Fahrenheit) of warming, a range of uncertainty that has remained stubbornly wide for decades. If Earth were no more complicated than a billiard ball flying through space, calculating this number would be easy: just under 1 degree C, Kirkby said. But that calculation doesn’t account for amplifying feedback loops from natural systems that introduce tremendous uncertainty into climate models.

Aerosols’ overall role on climate sensitivity remains unclear; estimates in the Intergovernmental Panel on Climate Change (IPCC) Fifth Assessment Report suggest a moderate cooling effect, but the error bars range from a net warming effect to a more significant cooling effect. Clouds generally cool the planet, as the white tops of the clouds reflect sunlight into space. But in polar regions, snowpack has a similar albedo, or reflectivity, as cloud tops, so an increase in clouds would reflect little additional sunlight. Instead, it would trap longwave radiation from the ground, creating a net warming effect.

Now atmospheric scientists can try to confirm whether what they observed in the CLOUD chamber occurs in nature. “What they’ve accomplished gives us a target to shoot for in the atmosphere, so now we know what instruments to take on our aircraft and what molecules to look for to see that these processes are actually occurring in the atmosphere,” Brock said.

To be sure, while these findings are a step in the right direction, Gettelman said, there are many other factors that remain large sources of uncertainty in global climate models, such as the structure and role of ice in cloud formation. In 2019, NCAR’s model projected a climate sensitivity well above IPCC’s average upper bound and 32% higher than its previous estimate—a warming of 5.3 degrees C (10.1 degrees F) if the global carbon dioxide is doubled—mostly as a result of the way that clouds and their interactions with aerosols are represented in their new model. “But we fix one problem and reveal another one,” Gettelman said.

Brock remains hopeful that future research into new particle formation will help to chip away at the uncertainty in climate sensitivity. “I think we’re gaining an appreciation for the complexity of these new particle sources,” he said.