Cosmic rays may have given right-handed genetic helixes an evolutionary edge at the beginning of life’s history. 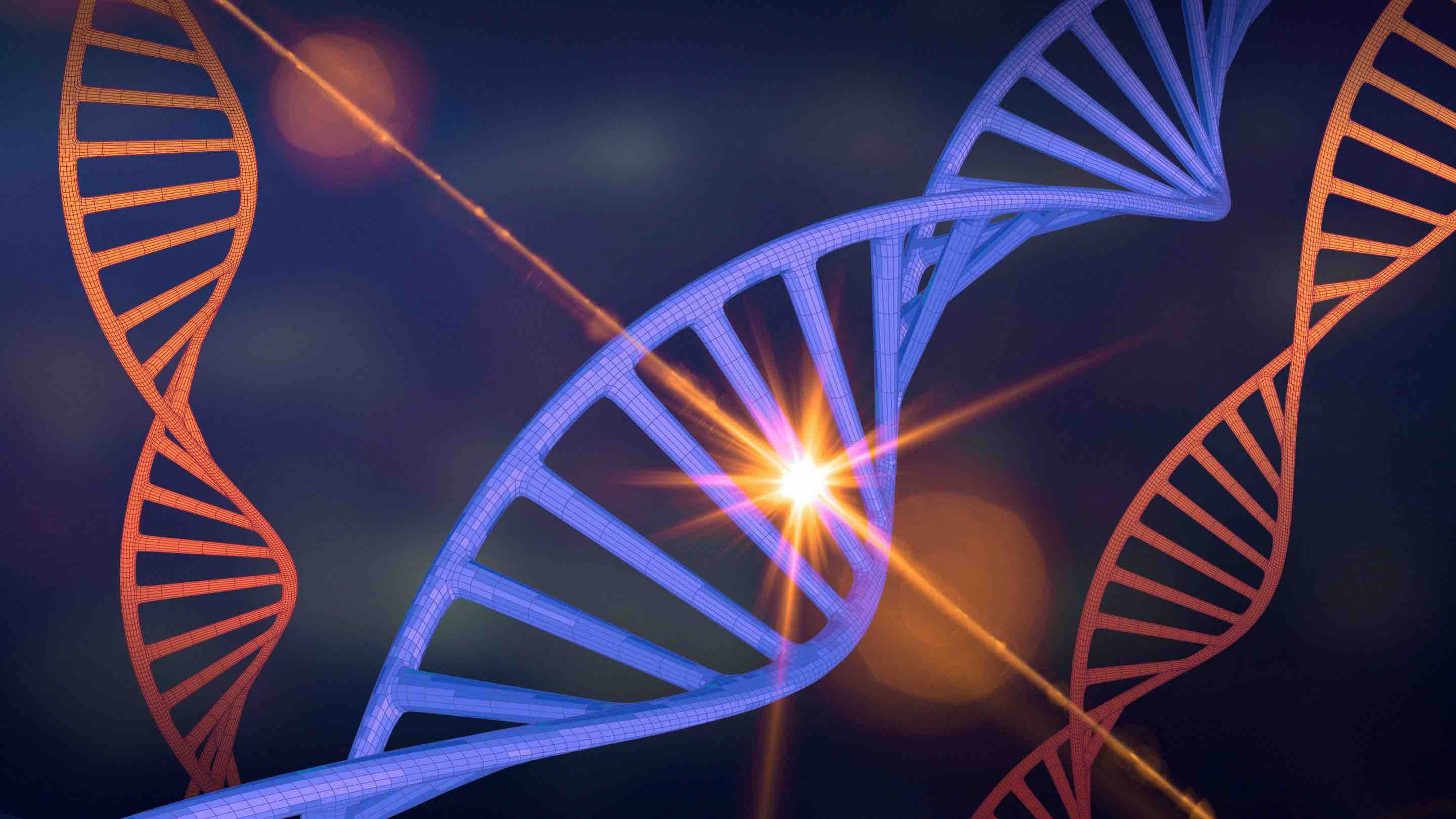 If you could shrink small enough to descend the genetic helix of any animal, plant, fungus, bacterium or virus on Earth as though it were a spiral staircase, you would always find yourself turning right—never left. It’s a universal trait in want of an explanation.

Chemists and biologists see no obvious reason why all known life prefers this structure. “Chiral” molecules exist in paired forms that mirror each other the way a right-handed glove matches a left-handed one. Essentially all known chemical reactions produce even mixtures of both. In principle, a DNA or RNA strand made from left-handed nucleotide bricks should work just as well as one made of right-handed bricks (although a chimera combining left and right subunits probably wouldn’t fare so well).

Yet life today uses just one of chemistry’s two available Lego sets. Many researchers believe the selection to be random: Those right-handed genetic strands just happened to pop up first, or in slightly greater numbers. But for more than a century, some have pondered whether biology’s innate handedness has deeper roots.

“This is one of the links between life on Earth and the cosmos,” wrote Louis Pasteur, one of the first scientists to recognize the asymmetry in life’s molecules, in 1860.

Now two physicists may have validated Pasteur’s instincts by connecting the unvarying twist in natural DNA with the behavior of fundamental particles. The theory, which appeared in May 2020 in The Astrophysical Journal Letters, doesn’t explain every step of how life acquired its current handedness, but it does assert that the shape of terrestrial DNA and RNA is no accident. Our spirals might all trace back to an unexpected influence from cosmic rays.

This work “points out a new chiral agent which we were not considering,” said Dimitar Sasselov, an astronomer at Harvard University and the director of the school’s Origins of Life Initiative, who was not involved in the research. “It seems to be very good.”

Cosmic rays are bullets from deep space, atomic shrapnel raining down constantly on our heads. These violent objects are the long-time quarry of Noémie Globus, a high energy astrophysicist at New York University and the Center for Computational Astrophysics at the Flatiron Institute. (Quanta Magazine is an editorially independent publication sponsored by the Simons Foundation, which also funds the Flatiron Institute.) But Globus didn’t think much about how cosmic rays might affect life until 2018 when she was a visiting scholar at the Kavli Institute for Particle Astrophysics and Cosmology, where she met Roger Blandford, a fellow astrophysicist and the Stanford University institute’s former director.

They started from the fact that cosmic ray showers, like DNA strands, have handedness. Physical events typically break right as often as they break left, but cosmic ray particles called pions tap into one of nature’s rare exceptions. When pions decay, the process is governed by the weak force—the only fundamental force with a known mirror asymmetry. Pions slamming into the atmosphere produce showers of particles including electrons and their heavier siblings, muons, all of which are equipped by the weak force with the same chiral magnetic orientation relative to their path. The particles bounce around as they streak through the atmosphere, Globus said, but overall they tend to keep their preferred chirality when they slam into the ground.

Earth’s first organisms—which were perhaps little more than naked barber poles of genetic material—likely came in two varieties, the researchers assumed. Some had DNA or RNA strands that curled like ours, which she and Blandford dubbed “live” molecules (chiral naming conventions differ by field), and others had mirror-reversed strands—“evil” life. With a series of toy models, the researchers calculated that the biased cosmic ray particles were ever-so-slightly more likely to knock an electron loose from a “live” helix than from an “evil” one, an event that theoretically causes mutations.

The effect would be tiny: Millions if not billions of cosmic ray strikes could be required to yield one additional free electron in a “live” strand, depending on the event’s energy. But if those electrons changed letters in the organisms’ genetic codes, those tweaks may have added up. Over perhaps a million years, Globus suggests, cosmic rays might have accelerated the evolution of our earliest ancestors, letting them out-compete their “evil” rivals. “If you don’t have mutations, you don’t evolve,” she said.

The researchers’ next task is to see if the handedness of real particles can actually cause the speedy mutation seen in their model. After they published their research, Globus approached David Deamer, a biologist and engineer at the University of California, Santa Cruz, for help. Impressed by her ideas, he suggested the simplest biological test he could think of: an off-the-shelf assay known as the Ames test that exposes a bacterial colony to a chemical to find out if the substance causes mutations. But instead of evaluating a chemical, the researchers plan to roast the microbes with beams of chiral electrons or muons.

Proof that the handedness of particles really can mutate microbes would strengthen their case that cosmic rays shoved our ancestors off the evolutionary starting block, but it still wouldn’t fully explain the uniform chirality of life on Earth. The theory doesn’t address, for example, how “live” organisms and “evil” organisms managed to materialize from a primordial smoothie containing both right- and left-handed building blocks.

“That is a very hard step,” said Jason Dworkin, a senior astrobiologist at the NASA Goddard Space Flight Center and an investigator with the Simons Collaboration on the Origins of Life, “but if this [theory] can provide a different mechanism, another Darwinian pressure, that’d be interesting.”

Even before genetic evolution enters the picture, another unknown process seems to handicap “evil” life. The simple amino acid molecules that form proteins also exist in “live” configurations favored by life and “evil” configurations that are not (although the preferred chirality for “live” amino acids is almost exclusively left-handed). Careful analysis of meteorites by Dworkin and others has found that certain “live” amino acids outnumber “evil” ones by 20% or more, a surplus they may have passed on to Earth. The excess molecules could be the lucky survivors of billions of years of exposure to circularly polarized light, a collection of beams all spiraling in the same direction that, experiments have shown, can destroy one type of amino acid slightly more thoroughly than the other.

But, like the cosmic rays, the beams of light have a marginal effect. Countless interactions would be needed to leave behind a noticeable imbalance, so some other force may be at work as well. Light would have to pulverize untenably huge quantities of molecules to explain the excesses on its own, Dworkin says.

Sasselov has encouraged Globus and Blandford to consider whether cosmic rays might join forces with polarized light to shape the amino acids on asteroids. On Earth, the doses of cosmic rays—which he likens to supersonic bullets—that would be needed to make a noticeable chiral difference might prove too lethal, he speculated. “You’re destroying so much of everything,” he said. “You may be left with the [correct] handedness, but essentially you’re shooting yourself in the foot.”

Ultimately, the fact that researchers struggle to find a theory that balances the rise of chirality against the destruction of biological materials suggests that our ancestors may have been lucky to find that fine line.

“There is something special about planets like the Earth that protect this kind of chemistry,” Sasselov said.