Dark Matter Could Be a Superfluid Sometimes

Dark matter might be fluid in galaxies but something else on vaster, cosmological scales. 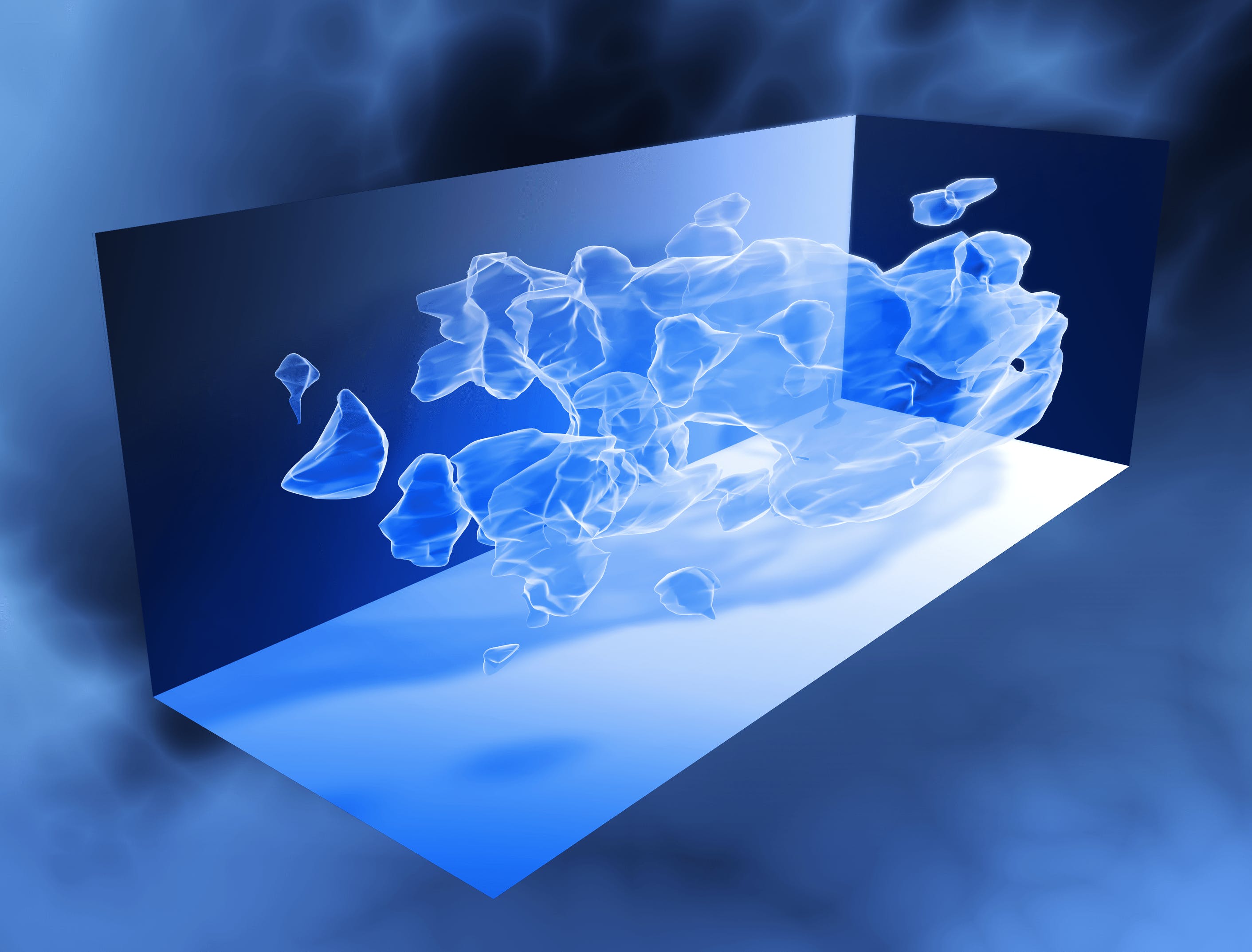 Despite cosmology’s enormous progress in the last 50 years, we still know very little about our universe. General relativity, the theory which allowed modern cosmology to start in first place, can account for our observations, but it comes with a cost: It introduces two unknown components in the energy-matter content of the universe—namely dark energy and dark matter, which supposedly have to account for 95 percent of our universe.

Let us focus on dark matter: The idea has proved to be extremely successful in accounting for the observed history of the cosmos, from its very beginning to present day, and from small galactic scales up to the boundaries of the visible universe. Moreover, it seems natural, as many extensions of the Standard Model of particle physics do predict very weakly interacting particles with the right properties.

However, in the last decade, no observational evidence came from direct searches for these new particles—not in astrophysics or at the Large Hadron Collider at CERN. Furthermore, dark matter properties at galactic scales, as inferred from observations, have proven to be not quite the same as those predicted by numerical simulations. Dark matter halos, clouds in which galaxies are supposed to be immersed, are observed to be much less dense at their centers and endowed with fewer and lighter satellites than predicted. All of these facts pose a real challenge for the idea of dark matter.

Dark matter undergoes a phase transition into something akin to a superfluid, in cold and dense enough environments.

To add mystery to the mystery, it’s been particularly intriguing to observe some regularities between luminous and dark components. One would not expect the total baryonic matter in a galaxy (atoms of any sort) to correlate with its asymptotic rotation velocity, which probes the total mass, luminous and dark, independently of any other property of the galaxy. Further confirmation of this trend comes from a recent study which found how the gravitational force, due to the luminous matter, are tightly correlated among very different galaxies, enough for bringing astrophysicists back to their desks scratching their foreheads…

Indeed, this and other odd observed properties seem to indicate a conspiracy between the dark and bright sides of galaxies that are unlikely to be explained by dark matter in its best-known form. So it is natural that many practitioners of the field started wondering if we did not take a wrong route; rather than extend the reality of particle physics, perhaps we should have looked for a modification of gravity instead.

For example, Modified Newtonian Dynamics, MOND in short, is a model in which no exotic matter component is present but the underlying gravitational law differs from Newtonian mechanics when accelerations are very tiny, as it occurs in galaxies. This proposal nicely performs at galactic scales (and with only a free parameter, the minimum acceleration below which new physics kicks in) but it fails in reproducing observations on larger scales. Of course, it is just a modification of the Newtonian theory of gravity, so per se it is not a competitor to general relativity. However, since the introduction of MOND, several relativistic theories of gravity, extensions of general relativity, have been proposed that reduce to MOND in the same limit in which general relativity reduces to Newtonian gravity.

So it seems, then, that we have two mutually excluding patches to cover our universe: on the scale of galaxy clusters, dark matter fits the data with exquisite accuracy, while on smaller scales modified gravity seems to be favored. Not a nice situation indeed…But sometimes in science, you can have your cake and eat it, too!

In particular, one can try to join the strengths of the two models to forge a better one. This is the idea of superfluid dark matter.

The basic idea is pretty simple: Dark matter does indeed exist in the form of a particle beyond the standard model, as normally conjectured, but undergoes a phase transition, the condensation into something akin to a superfluid, in cold and dense enough environments, like for example in galactic halos. On the other hand, on larger scales, where the condensation is not taking place, this form of dark matter behaves exactly as the standard cold dark matter. So this model will perform as nicely as standard dark matter on cosmological scales, but will introduce new physics at small (galactic) ones.

However, we did say that modified gravity already seems to fit the data nicely on a galactic scale. Why should this transition of dark matter into a superfluid—a non-dissipative system—make dark matter somehow simulate modified gravity approaches like MOND? Here the different implementations of the idea diverge.

In some models, the condensation of dark matter into a fluid generates a special coupling of dark matter to gravity. The point is that the dark matter condensate is endowed with a characteristic coherence length (as any condensate or superfluid in the lab does). This provides a sort of “gravitational foot” of dark matter that makes it sensible not only to the strength of the gravitational field at a given point but also to how much rapidly it changes around that point. Dark matter also couples to the curvature of spacetime, and this makes it appear as an extra component of the gravitational field. Remarkably, this in turn makes the standard matter “feel” the dark matter as a modification to spacetime—in essence, as modified gravity! And even more strikingly, the obtained form of modified gravity strictly resembles the kind of theories introduced, so they reduce to MOND in weak gravity/slow velocities situations.

The idea of a dark matter condensate immediately provides an answer to some puzzles of the standard framework.

In other approaches, the excitations over this dark matter condensate, the so called phonons, mediate an additional interaction between standard matter particles, which is universal in nature and, hence, appears again to modify the expected effects of gravity. Also in this case, such modification can reproduce MOND-like dynamics in the Newtonian limit.

The idea of a dark matter condensate immediately provides an answer to some puzzles of the standard framework. For example, the very presence of a finite coherence length implies the impossibility of having very steep gradients in the density, so it forbids the cusp of dark matter density observed in numerical simulations, but not in observations. Similarly, the non-dissipative nature of superfluid dark matter would affect the galactic dynamics with respect to the standard dark matter expectations, allowing, in particular, for less pronounced slowdown of galactic motions (more in agreement with present observations). Other characteristic signatures can be predicted by this superfluid phase, and scientists are now doing their best to accurately model and test them.

So the superfluid dark matter idea nicely conjugates the strengths of the standard dark matter at large scales with those of modified gravity at short ones. However, it is not identical to both proposals, so it is in principle falsifiable! For example, in galaxies one still has a contribution to the gravitational field coming from the dark matter forming the condensate/superfluid phase. So, in general, there will be deviations from exact MOND-like behavior—when reproducing rotation curves in galaxies, for example.

So what do we need to do in order to test this novel framework? Definitely a good starting point would be to run simulations trying to fit several dark matter observations with one model at different scales. A Bose-Einstein condensate is characterized by a few parameters: the strength of the interaction among its constituents, the number density, and the mass of them. It is still unclear if any reasonable choice of these parameters can lead to a suitable fit of galaxy rotation curves and satellites as well as cluster dynamics. How to explain the Bullet Cluster, for example? Further work is needed on the theoretical side to see if any extension of the Standard Model could provide the right elementary particle able to act as the dark matter of cosmology but at the same time perform such condensation at late times on small scales.

We do not yet know if the superfluid dark matter idea will turn out to be right. But it is of course intriguing if the solution to such a long standing riddle could find a solution through an elegant marriage of three branches of modern physics: the gravitational, particle, and condensed matter ones. If so, it would definitely be more evidence of the unity and elegance of our ever-amazing universe.