Researchers say there are three possible explanations for the anomalous data. One is mundane. Two would revolutionize physics. 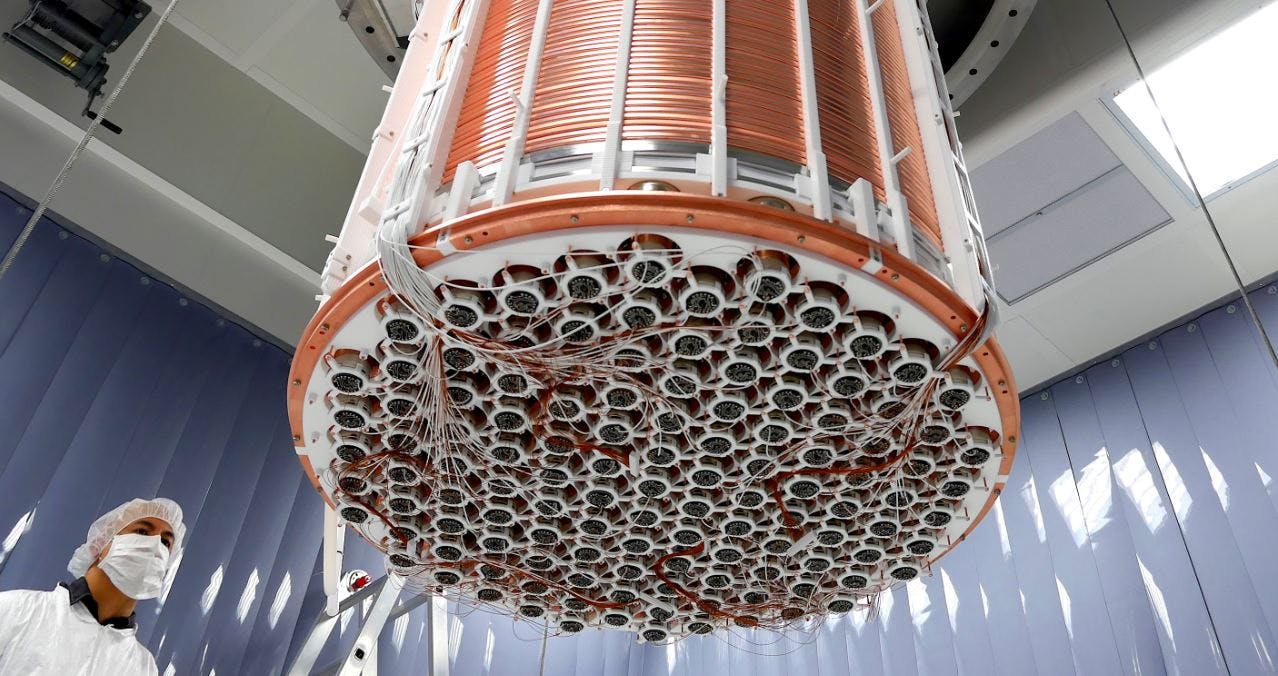 The physicists who run the world’s most sensitive experimental search for dark matter have seen something strange. They have uncovered an unexpected excess of events inside their detector that could fit the profile of a hypothetical dark matter particle called an axion. Alternately, the data could be explained by novel properties of neutrinos.

More mundanely, the signal could come from contamination inside the experiment.

“Despite being excited about this excess, we should be very patient,” said Luca Grandi, a physicist at the University of Chicago and one of the leaders of the 163-person experiment, which is called XENON1T. The experiment’s successor will be needed to rule out possible contamination from tritium atoms, Grandi said. That experiment is expected to begin in late 2020.

Outside experts say that whenever there’s a boring explanation, it’s usually right. But not always—and the mere possibility that XENON1T has made a discovery merits attention.

“If this turns out to be a new particle, then it’s a breakthrough we have been waiting for for the last 40 years,” said Adam Falkowski, a particle physicist at Paris-Saclay University in France who was not involved in the experiment. “You cannot overstate the importance of the discovery, if this is real.”

Particle physicists have searched that long for a more complete inventory of nature, beyond the set of particles and forces known as the Standard Model of particle physics. And for 20 years, experiments like XENON1T have hunted specifically for the unknown particles that comprise dark matter, the invisible stuff that throws its gravitational weight around throughout the universe.

If XENON1T’s signal comes from axions—a top dark matter candidate—or nonstandard neutrinos, “it would clearly be very exciting,” said Kathryn Zurek, a theoretical physicist at the California Institute of Technology. For now, though, “the mundane explanation of tritium is more likely in my mind.”

The result described in the paper is a pileup of events called “electronic recoils” inside the XENON1T detector. A sensor-lined tank of 3.2 metric tons of pure xenon, the detector is located thousands of feet beneath Gran Sasso, a mountain in Italy. As a chemically inert, “noble” element, xenon makes for a quiet gazing pool in which to look for the ripples of unknown particles, should any flit through.

The XENON series of experiments were originally designed to seek heavy hypothetical dark matter particles called weakly interacting massive particles, or WIMPs. Any WIMPs traversing the detector should occasionally collide with a xenon nucleus, generating a flash of light.

But after 14 years of searching with ever larger and more sensitive detectors, the researchers haven’t seen these nuclear recoils. Competing experiments looking for nuclear recoils in tanks of other noble elements and substances haven’t either. “It has been a saga, and we are all very desperate,” said Elena Aprile, a particle physicist at Columbia University who devised the xenon-based detection method and has been leading the XENON experiments ever since.

As the WIMP search kept coming up empty, XENON scientists realized several years ago that they could use their experiment to search for other kinds of unknown particles that might pass through the detector: particles that bang into an electron rather than a xenon nucleus.

They used to treat these “electronic recoils” as background noise, and indeed many of these events are caused by mundane sources such as radioactive lead and krypton isotopes. But after making improvements to dramatically reduce their background contaminations over the years, the researchers found that they could look for signals in the low-level noise.

In their new analysis, the physicists examined electronic recoils in the first year’s worth of XENON1T data. They expected to see roughly 232 of these recoils, caused by known sources of background contamination. But the experiment saw 285—a surplus of 53 that signifies an unaccounted-for source.

The team kept the finding under wraps for about a year. “We have been working and working and trying to understand,” Aprile said. “I mean, these poor students!” After rejecting all possible sources of error they could think of, the researchers came up with three explanations that would fit the size and shape of the bump in their data plots.

First and perhaps most exciting is the “solar axion,” a hypothetical particle produced inside the sun that would be similar to a photon but with a tiny amount of mass.

Any axions produced recently in the sun couldn’t be the dark matter that has shaped the cosmos since primordial times. But if the experiment has detected solar axions, then it means axions exist. “Such an axion could also be produced in the early universe and then would make up some component of dark matter,” said Peter Graham, a particle physicist at Stanford University who has theorized about axions and ways to detect them.

Researchers said the energy of solar axions inferred from XENON1T’s bump doesn’t fit with the simplest models of axion dark matter, but more complicated models can probably reconcile them.

Another possibility is that neutrinos—the most mysterious of the known particles of nature—might have large magnetic moments, meaning they’re like little bar magnets. Such a property would allow them to scatter with electrons at an enhanced rate, explaining the surplus of electronic recoils. Graham said neutrinos possessing a magnetic moment “would also be very exciting since it indicates new physics beyond the Standard Model.”

But it’s also possible that trace amounts of tritium, a rare hydrogen isotope, are present in the xenon tank, and that their radioactive decays generate electronic recoils. This possibility “can be neither confirmed nor excluded,” the XENON1T team wrote in their paper.

Outside researchers say there are “not red, but orange flags,” as Falkowski put it, that point to the boring answer. Most importantly, if the sun creates axions, then all stars do. These axions pull a small amount of energy away from the star, like steam carrying away the energy of a boiling kettle. In very hot stars like red giants and white dwarves, where axion production should be greatest, this energy loss would be enough to cool the stars down. “A white dwarf would produce so many axions that we wouldn’t see hot white dwarves around today like we do,” said Zurek.

Neutrinos with large magnetic moments have been similarly disfavored: In comparison to standard neutrinos, more of them would be spontaneously produced inside stars, sapping away more of the stars’ energy and cooling down hot stars more than is observed.

But that logic might be flawed, or some other particle or effect might explain XENON1T’s bump. Luckily the physics community won’t have to wait long for answers; XENON1T’s successor, the XENONnT experiment—which will monitor for recoils in 8.3 metric tons of xenon—is on track to begin data collection in late 2020. “If the excess is there and at the same level,” Grandi said, then “we expect to be able to discriminate among [the possibilities] in a few months of data taking.”

“One thing is clear,” said Juan Collar, a dark matter physicist at the University of Chicago who is not involved in the experiment. “The XENON program continues to trailblaze in the dark matter field. The most sensitive experiment will be the first to run into the unexpected, and XENON continues to maintain a solid grip on that prized pole position.”

Lead image: The heart of the XENON1T detector, which was designed to search for rare interactions with hypothetical particles. Credit: Xenon Collaboration