This isn’t the first time that scientists have wrestled with the unseen. 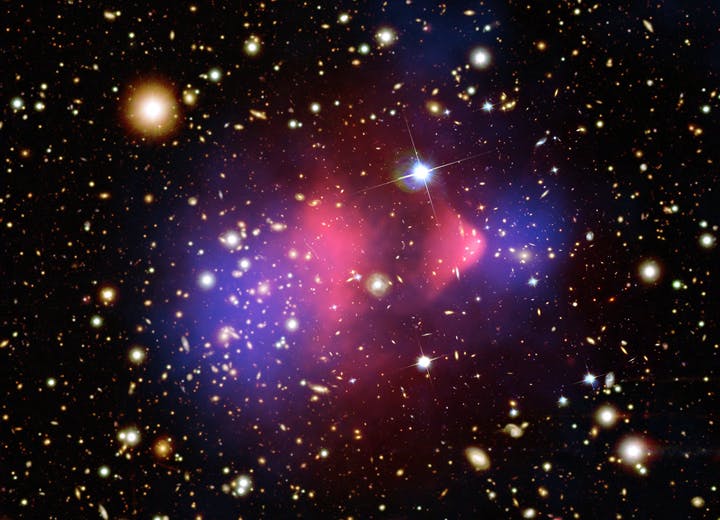 Naming something does not imply knowing it, and seldom has that principle been more apt than for dark matter in the universe. We give dark matter its name precisely because we do not know it. It does not emit, reflect, or absorb light, so we call it “dark.” It has no identifiable form, so we call it by the most generic word, “matter” as it behaves like matter. The name is really just a label for the hole in our theory that something that exerts gravity must eventually fill. The observed motion of stars in galaxies and galaxies in clusters can’t be explained without invoking some as-yet-unseen material of an unfamiliar sort.

It is hardly the first time that scientists have invoked unseen entities. Ether, phlogiston, miasma: These invisible fluids were invoked to account for phenomena that seemed inexplicable at the time. Eventually all were disproved. On the other hand, some such ghostly entities turned out to be real, such as oxygen. So, which way will it be for dark matter? Will it vanish as the ether did, or is it here to stay?

Or, to consider a different historical precedent, is dark matter like Neptune or like Vulcan? Early in the 19th century, astronomers noticed that the newly discovered planet Uranus was drifting off course; its orbit did not match the prediction of Newton’s theory of gravitation. Some speculated that an unseen world was tugging on it. In 1846 the French mathematician Urbain Le Verrier calculated where observers would find that new world—and they did. Neptune thus swam into astronomers’ ken. The planet Mercury, too, seemed to be pulled by an unseen planet nestled between it and the sun. Le Verrier called it “Vulcan” and calculated where observers should find it. This time, though, there was no such world. The fault lay in Newton’s laws. The anomalous motion of Mercury was accounted for by a complete reformulation of gravity theory, which Einstein proposed with his general theory of relativity.

In one instance a mismatch led to the refinement of an existing explanation, and in the other it required an entirely new transformative idea. As scientists, we remain open to either possibility for dark matter.

There is good reason to think that dark matter is not like ether and not like Vulcan. Many independent lines of evidence agree on the need for it. In 1933 the astronomer Fritz Zwicky measured the speeds of galaxies in the nearby Coma cluster of galaxies. These galaxies were whizzing around at dizzyingly high speeds and yet not flying away. This suggested that there was an unseen force holding them in its tight grip. Postulating that this gravitational glue was provided by matter that was there, but invisible to the eye, he boldly proposed the existence of dunkle Materie. Zwicky claimed there was almost 10 times as much mass in dark matter as in stars.

A few years later, he also predicted that if clusters such as Coma were replete with dark matter, then, per general relativity, this mass ought to produce a deep divot in the fabric of spacetime, thereby altering the paths of light rays in the universe. The cluster would act as a giant lens, distorting the images of galaxies behind it. At the time, telescopes with the resolution needed to detect these tiny distortions were yet to come.

The idea of dark matter languished till the ’70s. The resurgence came with the findings of Vera Rubin, Norbert Thonnard, and Kent Ford. Measuring the speeds of stars in spiral galaxies, they found that the motions, once again, implied vast amounts of invisible matter. It took a while to draw the connection between Zwicky’s dunkle Materie in clusters and the invisible mass that Rubin and her collaborators inferred in individual galaxies. Gradually it also become clear that dark matter is required not only to keep galaxies and clusters stable, but also to structure the entire universe. It provides the scaffolding for the formation of stars, galaxies, and clusters.

We are also avidly looking for other anomalies.

The observational evidence has accumulated steadily since then. Using the highest-resolution images provided by cameras aboard the Hubble Space Telescope, we now have images of the gravitational lensing that Zwicky predicted. The observed effects require almost 10 times more mass than we can see. Independent lines of evidence agree not just on the amount of dark matter there needs to be, but also on its basic properties: It seldom if ever collides, and it must also be “cold”—that is, relatively slow-moving. This concordance is one of the most compelling reasons to believe in the existence of dark matter.

But we are at an awkward impasse. Despite the overwhelming success of dark matter in explaining cosmic phenomena, we do not know what particle or particles it is made of. To date, almost all experiments searching for the elusive particle have reported null results, and the exceptions are highly controversial. One is x-ray emission attributed to decaying dark matter. The other is the signal detected by the DAMA/LIBRA collaboration in its underground experiment at the Gran Sasso National Laboratory in Italy. Four independent replications of this experiment, with identically grown sodium iodide crystals that constitute the detector, are currently underway and results are expected in about three years. In the meantime, we are also avidly looking for other anomalies—subtle mismatches between what we see in the universe and the theoretical predictions of the cold-dark-matter model.

Gaps between expectations and observations could be just what points the way out of this predicament. Some disparity between observations and the current accepted theory might signal the way forward to a missing ingredient of the universe or, perhaps more excitingly, to a radical new theory.