Dark Matter Is Our Friend

Without the extra heft of dark matter, you wouldn’t be here. 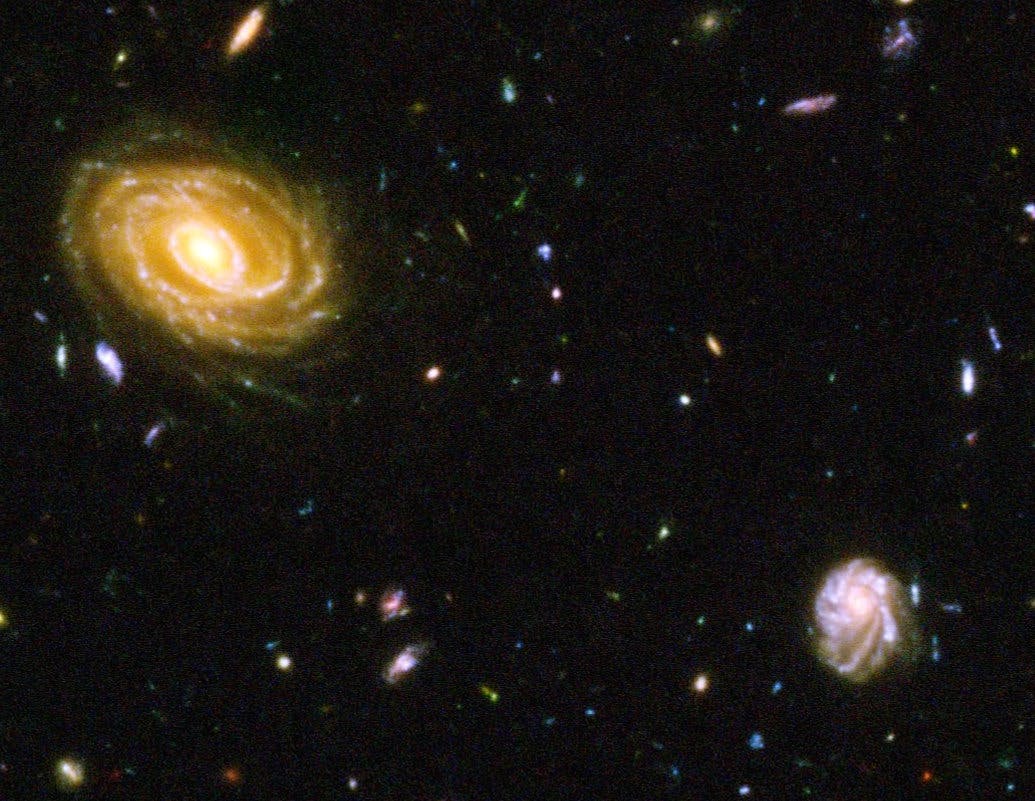 Particle physics got boring in the late 1970s. Unfortunately for me, that was not long after I had started out as a theoretical particle physicist. I had been drawn into the field by the sense of participating in an intellectual revolution. New types of particles kept materializing in our accelerators, fantastic new symmetries in nature captured our imagination, and some of my early scientific papers were on what we now call the Standard Model of elementary particles. But once the Standard Model clicked together, new data became sparse. I found myself gravitating to astrophysics, where data was abundant but puzzling. And that feeling has not dissipated. As much progress as cosmology has made since then, so many basic facts remain to be discovered.

When you look up at all the stars and planets in the night sky, or you admire the thousands of distant galaxies in the Hubble Space Telescope’s deep images, what strikes you is the sheer quantity of stuff in our universe. But all the glowing stars and gas clouds in all the galaxies represent only about 0.5 percent of it. The rest is invisible. Another 4.5 percent is ordinary matter, mostly hydrogen and helium, between the visible galaxies, which is effectively invisible because it is too diffuse to emit much light. About 27 percent is mysterious dark matter, which is not made of atoms or any of the parts of atoms and does not emit or absorb light. The remaining 68 percent is even more mysterious dark energy. We live in a double dark universe.

The evidence that most of the mass of the universe is invisible had become convincing by 1980. But there is no room in the Standard Model for dark matter. It was a terrific opportunity for a young theorist.

The most popular new idea in particle theory at the time was supersymmetry, according to which the Standard Model is just half the story. For each fundamental particle in that model, there is another particle that is too massive to have been produced at our particle accelerators. Heinz Pagels at Rockefeller University and I showed in 1982 that dark matter might be the least massive of these supersymmetric particles. More massive supersymmetric particles would be produced abundantly in the hot early moments of the Big Bang. They would then rapidly decay into this lightest one, which was expected to be stable.

Depending on which aspect of this particle you emphasize, it goes by different names. In terms of the particle’s own properties, it is known as a WIMP, for weakly interacting massive particle. (The acronym also allows for endless wordplay of the sort that particle physicists love.) In terms of its astrophysical consequences, it is called cold dark matter, because it would have been moving sluggishly in the early universe. My colleagues George Blumenthal, Sandra Faber, Martin Rees and I showed in 1984 that cold dark matter would clump into galaxies with roughly the masses and distribution that they are observed to have. We also predicted what density undulations the early universe needed to have in order to start the clumping process, and when NASA’s Cosmic Background Explorer (COBE) confirmed our prediction in 1992, we were walking on air for weeks.

Dark matter is our friend. Dark matter creates the galaxies and all the other large structures that are held together by gravity. Without dark matter the universe would just be a thin soup of ordinary matter. There would be no galaxies, no stars, no heavy elements, no rocky planets, and no life. So we owe a tremendous debt to dark matter.

Dark matter also opened the door to an even deeper mystery. Although there is vastly more of it than ordinary matter, that still isn’t enough.

For various theoretical reasons, the most natural value of the total density of the universe is a quantity called critical density, and observations indicated that ordinary matter plus dark matter account for less than that. In 1991 my collaborators and I considered the possibility that the remainder was a form of energy that Einstein called the cosmological constant or, more generally, what we know today as dark energy. We worked out how a cosmological constant would affect the formation of gravitationally bound structures such as galaxies and galaxy clusters. Meanwhile, my graduate student Jon Holtzman worked out in his dissertation what it would imply for the even larger structures.

These models fit the COBE data, but the real confirmation did not come until 1998, when two competing teams of astronomers independently found that the expansion of the universe has been speeding up—the telltale effect of the cosmological constant. The clincher has been measurements by two follow-ups to COBE, NASA’s WMAP satellite and the European Space Agency’s Planck satellite, which confirm the predictions of the double-dark theory with fantastic precision.

Even those of us who helped to create the model are amazed it works so well. Some astrophysicists have worried that its predictions might disagree with observations of certain regions, such as the smallest galaxies and the cores of galaxies or galaxy clusters. But improved simulations have refined the predictions and appear to have resolved these issues. We now at last have a picture of the evolution and structure of the universe that might actually be true.

But the model does not tell us what dark matter and dark energy are; it simply captures their large-scale effects. We still have no direct evidence for either supersymmetry or WIMPs. Alternative explanations of dark matter have been proposed, but there is no convincing evidence for them, either.

Dark energy is even more of a tantalizing mystery. It is an entirely new kind of entity, and it very hard to see how it fits into our whole pattern of explanation in the physical sciences. Einstein’s cosmological constant is only the simplest possibility of many alternative forms of dark energy. These other forms are not strictly constant with time, which we could detect as a change in the rates of cosmic acceleration and the growth of structure in the past. But we have not yet observed such a phenomenon. Physicists and astronomers are working hard to identify dark matter and dark energy, and when we do, it could well represent a revolution in our understanding of the fundamental nature of the universe greater than the one that gave us the Standard Model.

The ongoing cosmological revolution has implications so profound and far-reaching that it cannot help but alter how we humans view our place in the universe. We will need to seek new modes of understanding. Although no one ever imagined the bizarre universe that science is discovering, we can draw on the entire human experience to try to make sense of it. My wife, the philosopher and historian of science Nancy Ellen Abrams, and I tried to respond to this challenge in our course “Cosmology and Culture,” which we taught at the University of California, Santa Cruz, for more than a decade. That led to our books The View from the Center of the Universe and The New Universe and the Human Future, as well as Nancy’s new book A God That Could Be Real.

It is a bit startling to identify the expanding universe with a womb.

Our goal has been to explain how we humans arose from and fit into the modern universe. We seek to connect ideas such as the double-dark universe with other aspects of science and philosophy, including ancient wisdom traditions. For example, Native American and other traditional cultures hold that humans arose from the earth and bear close relationships with other animals. That is consonant with modern science.

The brief moment of cosmic inflation that started our expanding universe has analogues in ancient Egyptian creation myths and in the ideas of Kabbalah, medieval Jewish mysticism.

The first three parts of the Kabbalistic tree of life are Keter, Hokhmah, and Binah. Like Keter, eternal inflation is the infinite source of all possibilities; like Hokhmah, cosmic inflation is the exit from eternity that prepares the blueprint for the future universe; like Binah, the expanding universe has turned the primal plan into spacetime and galaxies. Binah was seen as female in Kabbalah. It is a bit startling to identify the expanding universe with a womb, yet there is something reassuring about positing motherly understanding as a cosmic quality. Hokhmah was seen as male, while Keter was beyond gender, nicely balancing things out.

The idea that any aspect of the universe is either male or female is, of course, not to be taken literally. But there is no reason that people outside science should process the ideas of modern cosmology in the same way that scientists have. Science is discovering a remarkable unity and intricacy to the natural world, and mythological concepts can perhaps help us experience these connections.