New data tracking the movements of millions of Milky Way stars have effectively ruled out the presence of a “dark disk” that could have offered important clues to the mystery of dark matter. 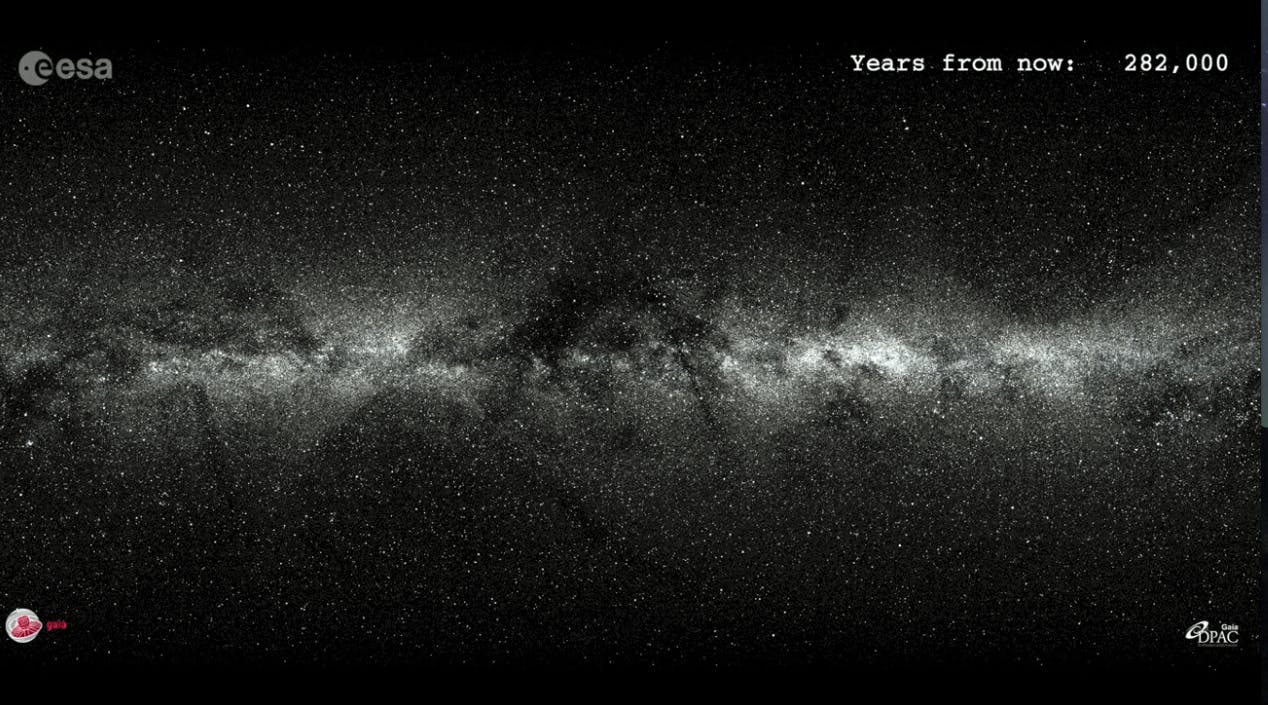 Eighty years after the discovery of dark matter, physicists remain totally stumped about the nature of this nonreflective stuff that, judging by its gravitational effects, pervades the cosmos in far greater abundance than all the matter we can see. From axions to WIMPs (or “weakly interacting massive particles”), many candidates have been proposed as dark matter’s identity—and sought to no avail in dozens of experiments. One enticing speculation to have emerged in recent years imagines that dark matter isn’t a single, monolithic thing. Rather, there might exist a whole family of dark particles that interact with one another via unknown dark forces, much as ordinary matter consists of quarks, electrons and a bustling zoo of other light-sensitive quanta.

The existence of a rich “dark sector” of particles could have consequences on galactic scales. Whereas dark matter of a single, inert type such as an axion would enshroud galaxies in spherical clouds called halos, particles in a dark sector might interact with one another in ways that release energy, enabling them to cool and settle into a lower-energy configuration. Namely, these cooling dark matter particles would collapse into rotating disks, just as stars and gas settle into pancake-shaped rotating galaxies and planets orbit their stars in a plane. In recent years, Lisa Randall, a theoretical physicist at Harvard University, has championed the idea that there might be just such a disk of dark matter coursing through the plane of the Milky Way.

Randall and collaborators say this hypothetical dark disk could explain several observations, including a possible uptick of asteroid and comet impacts and associated mass extinctions on Earth every 35-or-so million years. As Randall discusses in her 2015 book, Dark Matter and the Dinosaurs, the subtle periodicity might happen because space objects get destabilized each time our solar system passes through the dark disk while bobbing up and down on its way around the galaxy.

However, when I reported on the dark disk hypothesis in April 2016, the disk and all it would imply about the nature of dark matter were already in trouble. Inventories of the Milky Way showed that the mass of stars and gas in the galactic plane and the bobbing motions of stars circumnavigating the galaxy match up gravitationally, leaving only a smidgen of wiggle room in which to fit an invisible dark disk. At that time, only an extremely thin disk could exist, accounting for no more than 2 percent of the total amount of dark matter in the galaxy, with the rest being of the inert, halo-forming kind.

Still, the presence of any dark disk at all, even one made of a minority of dark matter particles, would revolutionize physics. It would prove that there are multiple kinds of interacting dark matter particles and enable physicists to learn the properties of these particles from the features of the disk. And so researchers have awaited a more precise inventory of the Milky Way to see if a thin disk is needed to exactly match the mass of stuff in the galactic plane to the motions of stars around it. Now, with the numbers in, some say the disk is dead.

Katelin Schutz, a cosmology graduate student at the University of California, Berkeley, and coauthors have checked for a dark disk using the first data release from the Gaia satellite, a European spacecraft endeavoring to measure the speeds and locations of one billion Milky Way stars. In a paper posted online Nov. 9 and soon to be submitted to Physical Review Letters, Schutz and collaborators analyzed a subset of the stars measured by Gaia (representing 20 times more stars than had been previously analyzed). Their findings excluded the presence of any dark disk denser than about four-thousandths the mass of the sun per cubic light-year at the midplane of the galaxy. A disk roughly twice as dense would be needed to explain the comet impact periodicity and other original justifications for the dark disk idea. “Our new limits disfavor the presence of a thin dark matter disk,” Schutz and coauthors wrote—and that’s the case, she added by email, even though “we have tried to be quite generous and conservative with our estimations of systematic uncertainty.”

“I think it really is dead!” said David Hogg, an astrophysicist at New York University and the Flatiron Institute (which, like Quanta, is funded by the Simons Foundation), and a leading expert in astronomical data analysis. “It is sad, of course.”

However, Randall and Eric Kramer, her student-collaborator on a 2016 paper that found room for a thin dark disk, aren’t prepared to admit defeat. “It’s a good solid analysis, but I don’t think it rules out a dark disk,” Randall said. In particular, she and Kramer question the authors’ assumption that the stars they analyzed were in equilibrium rather than oscillating or ringing. According to Randall, there is some evidence that “the more straightforward equilibrium analysis might not be adequate.”

“I think you’re never going to convince everyone, and science is always a conversation rather than a declaration,” Schutz said. Still, the Milky Way inventory will become even more precise, and any nonequilibrium effects can be teased out, as more Gaia data become available.

Even if there’s no dark disk, it’s still possible that there might be a dark sector. It would have to consist of particles that—unlike particles in the light sector—don’t interact and combine in ways that give off significant amounts of energy. The possibilities for dark matter are virtually endless, given the stunning absence of experimental hints about its nature. That dearth of clues is why the dark disk “would have been awesome,” Hogg said.

Lead image: A still from a projection showing how the positions of some 2 million stars measured by the Gaia satellite are expected to evolve in the future. Credit: Copyright: ESA/Gaia/DPAC, CC BY-SA 3.0 IGO