Did Our Ancestors Become Bipedal So They Could Throw? 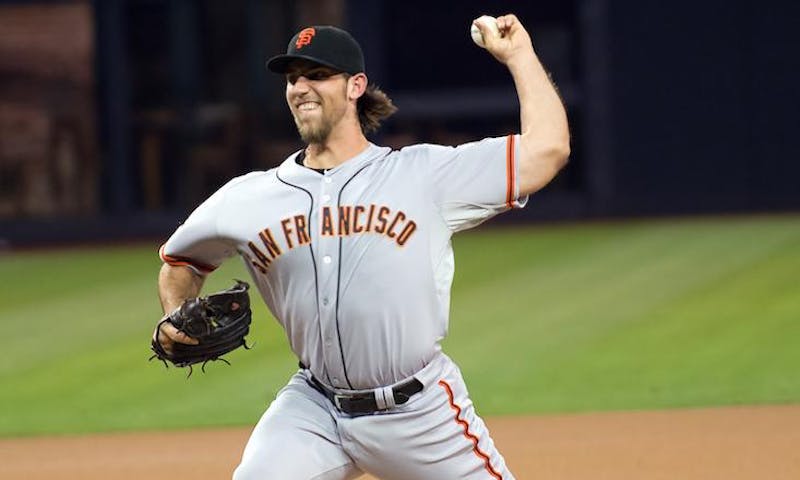 When San Francisco Giants pitcher Madison Bumgarner stands on the mound, he looks as if he’s stalking the batter at the plate. The first part of his wind-up seems deliberate, almost prayer-like. From the stretch, he brings his glove, on his right hand, up slowly, so that it’s just under his chin as he eyes the runner on first base. Then, suddenly, his body coils as he thrusts his right knee violently to his chest. Using his left leg, planted on the pitching rubber, he propels toward home plate. As Bumgarner’s body surges ahead, his throwing arm winds back then snaps through as his hand releases the ball. That momentum causes his weight to transfer from his left leg to his right, a shift in his center of gravity that forces his back leg to lever up suddenly—a supreme distraction to the batter focused on making contact with his 95-mile-per-hour fastball.

Bumgarner is a pro, but his delivery is merely a refined version of a skill “humans have been specialised to exploit for millions of years,” say Andrew D. Wilson, a cognitive scientist at Leeds Beckett University, in West Yorkshire, and colleagues, in a Scientific Reports paper published this month. Better stone and spear throwers were not only more successful hunters—which meant more calories and, by extension, better health and reproductive success—they were also able to better defend themselves from other hostile hominids. At the Cave of Hearths, in South Africa, Wilson’s team found 227 spheroid stones at a site dating back to the Early Stone Age, about 1.8 million years ago. Based on projectile motion simulations, they found that 81 percent of the stones could, if thrown, inflict “worthwhile damage to a medium-sized animal over distances up to 25 m.” That’s a bit more than the distance Bumgarner traverses from the mound to home plate—18.4 meters.

Some anthropologists maintain that throwing was also a catalyst for a defining characteristic of our species: bipedalism, the ability to walk upright. Darwin suspected as much. In his 1871 book, The Descent of Man, he wrote that the “hands and arms could hardly have become perfect enough to have manufactured weapons, or to have hurled stones and spears with a true aim, as long as they were habitually used for locomotion and for supporting the whole weight of the body, or…for climbing trees. From these causes alone it would have been an advantage to man to have become a biped.”

Paleontologists since Darwin’s time have noted this culmination in the fossil record—a distinct shift in anatomy of the arm, hand, and shoulder away from a configuration suited to swinging through trees to one for throwing stones and spears. Tree-dwelling primates, for example, such as lemurs and tarsiers, have long, narrow shoulder blades designed specifically for overhand locomotion from branch-to-branch. Humans have much wider, triangular-shaped shoulder blades, which allow for a wider range of movements, including throwing.

“The shoulder is almost as unique as a face.”

Indeed, the human shoulder’s defining characteristic is its variability, says Nathan Young, an associate professor of orthopedic surgery at the University of California, San Francisco. “The shoulder is almost as unique as a face,” he says. Much of this variability is found in the scapula, which in humans can vary widely in shape, size, and orientation. By comparison, Young notes, the shoulder blades of tree-dwelling primates show little variation.

That uniqueness of form hints at the shoulder’s supreme versatility. After all, we don’t just use our shoulders for throwing—digging and rooting may have also played a role in changing the shoulder’s geometry, Young says. But when we do, the throwing motion transforms it, along with the rest of the arm, into a sort of high-precision anatomical slingshot. Of course, the body’s lower half—a rotating trunk and large gluteal muscles, the group of three muscles comprising our hindquarters—is also heavily involved, allowing for greater throwing force. “It’s a whole linked system,” says Mary Marzke, an emeritus professor of anthropology at Arizona State University. “You can’t look at one piece of it without considering the whole thing.”

But were the advantages of throwing the reason we became bipedal? Mary Marzke says the answer is still not entirely clear. “There were a lot of evolutionary experiments at being bipedal,” she says, pointing to various lines of upright-walking but now extinct hominids. “When you look at the shoulder, elbow, wrist and hands of each, there are lots of different combinations, a whole mosaic of patterns.” For example, unlike the hook-like fingers common to many primates adapted to swinging in trees, the fingers of Australopithecus afarensis, she says—which lived between 2.9 and 3.9 million years ago—were capable of forming a “cup,” suggestive of human hand-like dexterity. “Why would this have occurred so long ago?” she wonders. “We have found no tools as old as these afarensis fossils.” To Marzke, this means the diminutive afarensis—whose bipedalism is still debated—could likely throw with some measure of skill.

Young, for his part, says that there is evidence to suggest that bipedalism preceded throwing, pointing to hominids such as the 2-million-year-old Australopithecus sediba, which had modern-looking feet and legs attached to a more primitive upper body. Still, a connection between bipedalism and throwing remains. “By the time you get to Homo there seems to be much stronger selection for the upper body in coordination with the lower body,” he says.

The first real hurlers, then, arose about a million or so years later with our big game hunting forebear Homo erectus. Its shoulder, says Harvard anthropologist Neil Roach, like that of modern humans, used a highly specialized sequence of muscles, involving various tendons and ligaments, allowing it to store and then suddenly release tremendous amounts of energy, like a catapult.

The late Richard Young, an emeritus professor of neurobiology at University of California, Los Angeles, agreed. “Improved dynamic upright balance on more powerful legs and resilient feet in the service of throwing and clubbing would have made upright locomotion more efficient, leading to its increasing use and eventually culminating in habitual bipedalism,” he wrote in 2003.”

It seems that, once getting around on just two legs became the overriding norm, the arms in turn became free to specialize in non-traveling efforts even more. This allowed for more powerful hurling of stones, spears, and—hundreds of thousands of years later—a nine-inch circumference leather ball.

Jeremy Miller is a writer in Richmond, California. His recent work has appeared in Harper’s, Orion, and Pacific Standard. Follow him on Twitter @JeremyJ_Miller.

The lead photograph is courtesy of SD Dirk via Flickr.