Does Science Suggest Humans Have a Cosmic Role?

Almost in spite of themselves, scientists are driven to a teleological view of the cosmos. 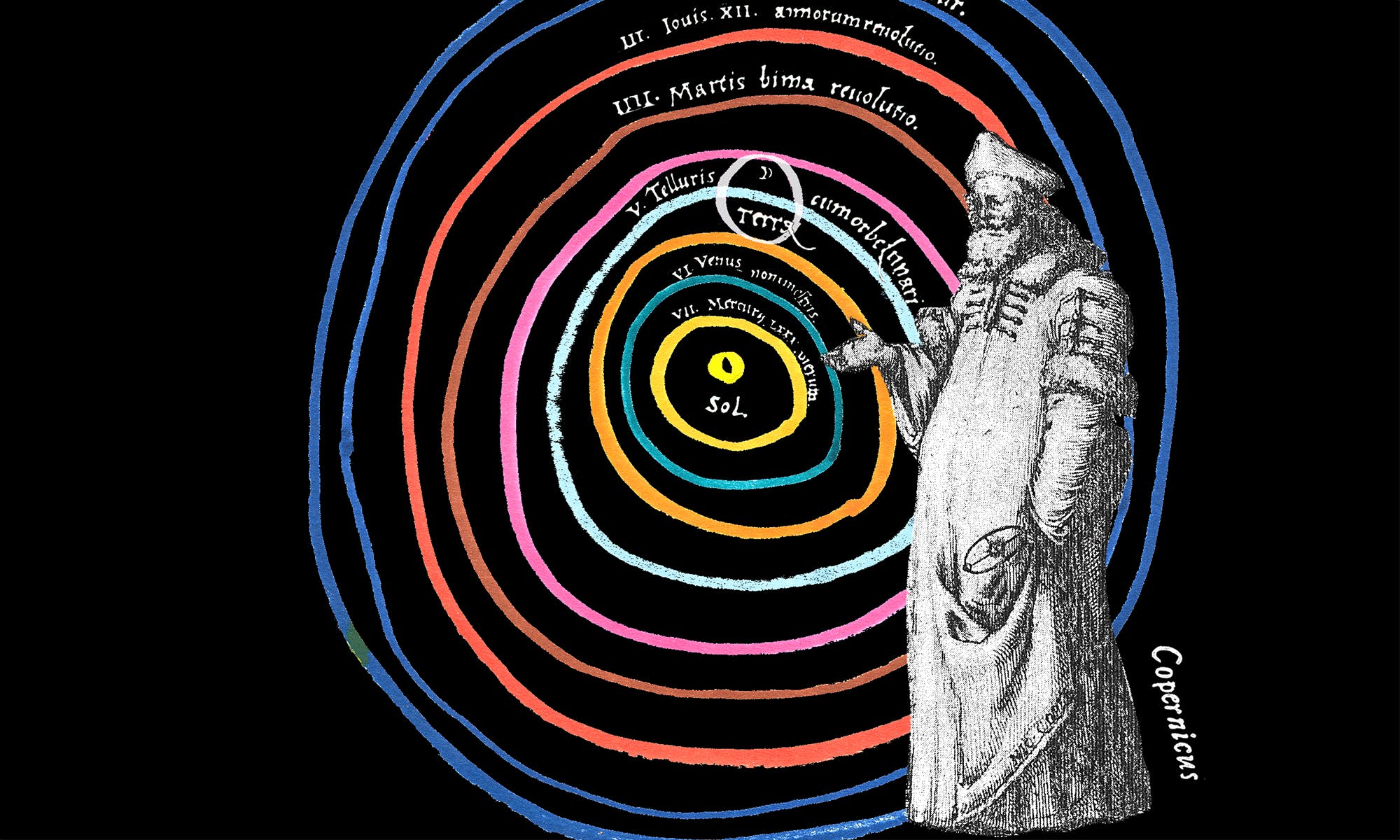 People today, if asked about humanity’s place in the cosmos, would probably echo the sentiment of Carl Sagan: “We live on an insignificant planet of a humdrum star, lost in a galaxy, tucked away in some forgotten corner of a universe.” That is to say, humanity is ordinary, cosmically speaking, just one of countless examples of extraterrestrial intelligence spread across the universe. This view reflects an appreciation of the remarkable successes of science that show that the universe is vast and about the same everywhere. But there was a time when astronomers placed the Earth at the center of the universe and humanity, too, was seen as being cosmically central. Once Copernicus showed that the Earth was not the center of the universe, we demoted ourselves to being ordinary. The idea today that we are commonplace is sometimes called the notion of Copernican mediocrity.

As a research astrophysicist, I can say without exaggeration that a day never goes by when I am not impressed by the amazing explanatory power of modern science. But I am also trained to be open to the world as it presents itself, not just as I would like it to be. So it is worth calling attention to two recent discoveries that suggest our place in the cosmos needs reconsideration. We might not be ordinary at all.

Intelligent life could be the result of an astronomically unlikely sequence of events.

The idea that intelligent life could be common in the universe has ancient roots. In the Renaissance, the theologian and natural scientist Giordano Bruno was burned at the stake, in part for claiming it. One-hundred-and-eighty-one years ago the New York Sun even published images of the moon’s inhabitants cavorting around. In 1908, Percival Lowell, famous for his studies of the canals of Mars wrote: “From all we have learned of its constitution on the one hand or of its distribution on the other we know life to be as inevitable a phase of planetary evolution as is quartz or feldspar or nitrogenous soil. Each and all of them are only manifestations of chemical affinity.” Today of course we know that Mars has no canals, and no aliens either. From a purely scientific perspective, recent books and papers have shown that that it takes much more than a hospitable environment for life even to arise, much less to evolve and survive to become intelligent. At a minimum, it takes billions of years of relatively stable conditions. Any putative planet must at least be in a stable orbital system around a star that is neither short-lived nor an emitter of toxic X-rays. Numerous evolutionary biologists, writing on the remarkably contingent nature of the evolution of humanity, have added a biological caution: Even on the Earth, if evolution were repeated, it is not likely to produce intelligent beings again. Thus, even though the processes at work around the universe are more-or-less similar, some events are less likely than others to occur. Until we know more, we must acknowledge that the evolution of intelligent life could be the result of an astronomically unlikely sequence of events.

Many of my colleagues are enthusiastic about finding extraterrestrial intelligence. But there are some unbreakable physical realities to confront, in particular the finite speed of light. It does not matter whether or not aliens thrive in the distant reaches of space—they might or might not. What matters is whether we can communicate with them. Until then we are just guessing. In a neighborhood volume of space that we can probe in a thousand years (a long time for us, but an eye-blink in cosmic history) there are only some millions of stars. I support the searches for extraterrestrial intelligence. But if the chances of life appearing, evolving, and surviving to become extraterrestrial intelligence were just one in a million, then it is unlikely our neighborhood has any besides us.

Now for the news: Astronomers using NASA’s Kepler telescope and other facilities have found over 3,000 exoplanets so far, and even determined many of their sizes and masses. The discoveries have been a remarkable achievement, but no surprise to my colleagues or me. After all, we expected them. What was surprising is that we also expected them to resemble the solar system, but many don’t. In fact, the single most remarkable discovery about exoplanets is their exotic variety. Among the new planets are some Earth-sized ones in their “habitable zones” (the habitable zone is the range of distances from the star where water, thought to be essential for life, can remain liquid). Even more exciting, the statistics so far imply there could be a lot of them. But Earth-sized by no means Earth-like. Venus and Mars are Earth-sized and in the habitable zone. Moreover, most of the currently known Earth-sized exoplanets orbit around stars that are neither like the sun nor particularly hospitable. The nearby star Proxima Centauri is one such example. Its active winds and X-ray radiation probably inhibit life from forming on its recently discovered, nearly Earth-sized planet that orbits it every 11.2 days.

The remarkable discovery of exoplanets has not increased the chances for finding aliens. Because so many of the known exoplanets are much more complicated than previously imagined, and are complex in ways seemingly detrimental to their evolving intelligence, all the previously rough estimates of the chances for producing intelligence are reduced even further. For all practical purposes we could be alone, with no one to talk to, for a long time.

We should treat one another as the priceless beings we appear to be.

If it is possible that we are alone, or at least alone as far as we know, for thousands or tens of thousands of years, then it is possible we are not cosmically ordinary. Intelligence could be very rare. Stephen Hawking, voicing the opinion of many of my colleagues, also said, “I can’t believe the whole universe exists for our benefit.” He spoke accurately: This is his belief—a personal feeling, based in part on believing that we can’t possibly be anything but ordinary—a “chemical scum.” I have my beliefs too, but let’s put them aside. All the observations so far are consistent with the idea that humanity might not be common. Moreover, we are unlikely to find out one way or the other for millennia, so this conclusion will remain a distinct possibility for a long time. I call this the Misanthropic Principle.

The second dramatic discovery is usually called the Anthropic Principle. The laws of the universe include fundamental numbers like the strengths of the four forces, the speed of light, Planck’s constant, the masses of electrons or protons, and others. Neither my physicist colleagues nor I have any idea why they take these particular values. They could be anything! But we do know that if those values were slightly different, even by a few percent, we would not be here. Carbon atoms could not exist, for example, or the sun might only burn for millions instead of billions of years. Life, much less intelligent life, could not exist. The most extreme example of precision are the parameters of the big bang creation for which it is estimated even an infinitesimal change would preclude life. This remarkable situation of fine-tuning has been carefully considered for decades. Barrow and Tipler’s exhaustive book, The Anthropic Cosmological Principle, is one of many detailing these “coincidences.” That the universe appears to be fantastically finely tuned for intelligent life is not particularly controversial, and is the second piece of evidence related to the end of Copernican Mediocrity. But, you might ask, why is the universe so perfect?

Good question. There are so far only three kinds of answers from science. One is just dumb luck. The second answer, proffered and defended by most of my theoretically minded colleagues, is the multiverse: There are an infinite number of universes spanning all logical possibilities. We just live in the one we can. The third answer touches on philosophy, and comes from quantum mechanics. (If you have taken any modern physics course, it is likely you will have heard this notion before.) Matter is composed of wave functions of probability that only become “real entities” when they are measured by a conscious observer. The quantum mechanical pioneer, John Wheeler, is one of several thinkers who have proposed that the unusual nature of the universe suggests it had to evolve conscious beings in order to become real.

I will admit that I am not a fan of any of these. It seems a cop-out to say we are just lucky, and as a physicist trained to give preference to simple solutions, a multiverse strikes me as the opposite: exorbitant. The quantum mechanical route is possible, but uncomfortably mysterious. Yet there are quite a few mysteries still in quantum mechanics, so of the three it has potential, especially because ongoing quantum research should make progress in our lifetime.

The point here is that if some process—perhaps quantum mechanics but maybe something else—steers the universe toward producing intelligence, then we humans are representatives of that teleological endpoint. It suggests that we play some cosmic role. I hope this is an eye-opener for you. It certainly was for me when I first read Wheeler’s paper, and it has become even more pressing today, as we learn more about exoplanets and fine-tuning. Modern philosophers have chimed in too: Thomas Nagel puts it this way in his 2012 book, Mind and Cosmos: “We have not observed life anywhere but on earth, but no natural fact is cosmologically more significant.”

I am an experimental scientist because I love discovering the world and its often surprising, unexpected, features. I think it is good advice not to make too many assumptions, and presuming we must be commonplace is an assumption. Of course, presuming we are rare is another. Instead, we must learn from nature with an open mind. I think the evidence, and the simplest conclusion, is that humanity is not ordinary and we may have a significant cosmic role. There are, therefore, ethical issues to consider, and religion can contribute a meaningful voice to this discussion. We should treat one another as the priceless beings we appear to be, and care for our rare cosmic home, the Earth. Modern science may have prompted this re&dash;evaluation, but addressing it will require the best of all our human abilities.