Fight the tendency to see your life as a narrative journey. 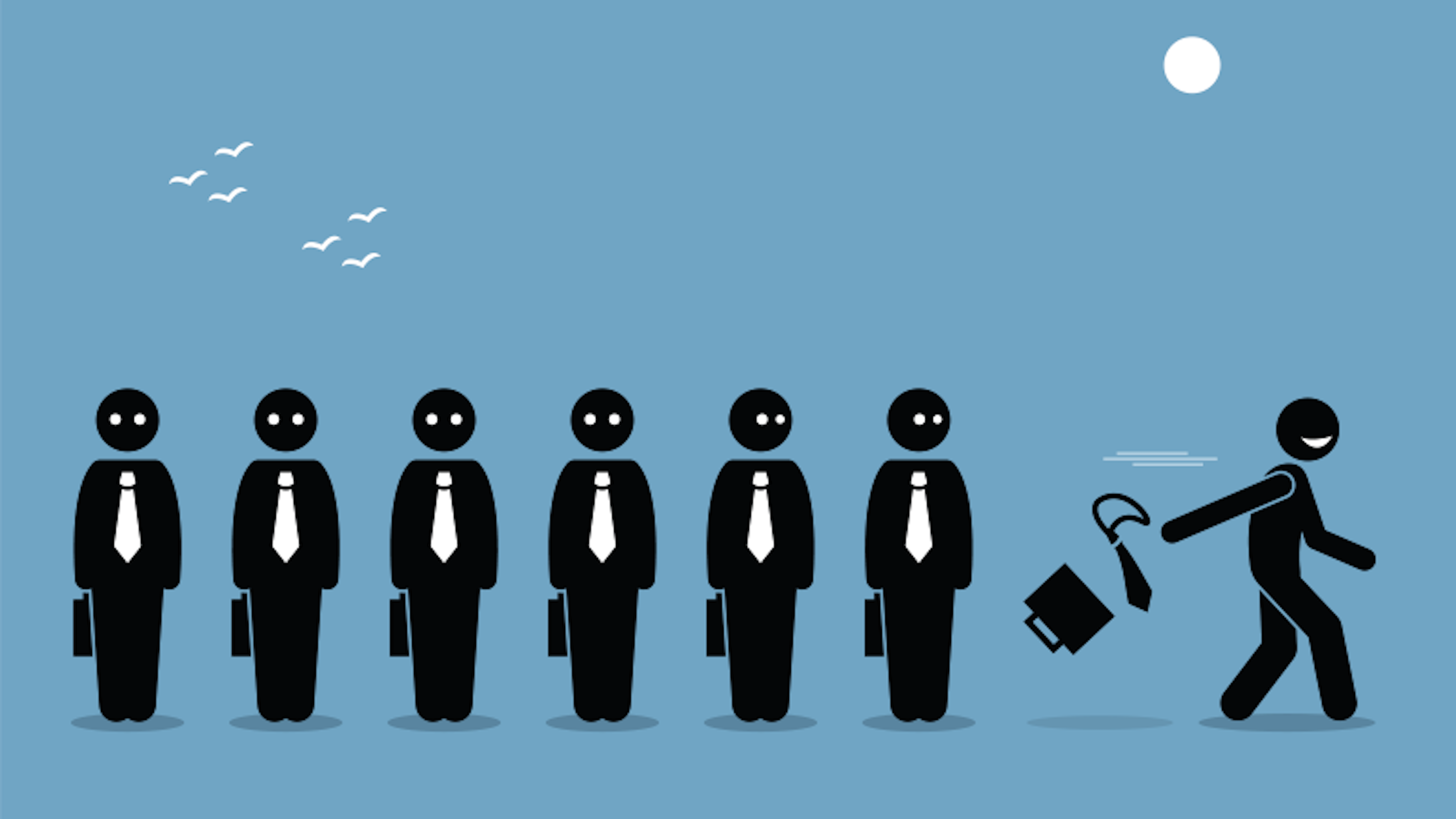 The idea that we narrate our lives to ourselves, and that doing so is part of living well, is sufficiently commonplace that its most vocal critic, the philosopher Galen Strawson, could describe it as “a fallacy of our age.” He lists an impressive roster of advocates, including the neurologist and author Oliver Sacks (“Each of us constructs and lives a ‘narrative’ … this narrative is us”), the psychologist Jerome Bruner (“We become the autobiographical narratives by which we ‘tell about’ our lives”), and a murderers’ row of philosophical big hitters: Alasdair MacIntyre, Daniel Dennett, Charles Taylor, and Paul Ricoeur. For Taylor, a “basic condition of making sense of ourselves [is] that we grasp our lives in a narrative … as an unfolding story.” And for Dennett, “We are all virtuoso novelists, who find ourselves engaged in all sorts of behavior, more or less unified … and we always try to put the best ‘faces’ on it we can. We try to make all of our material cohere into a single good story. And that story is our autobiography.”

It sounds appealing, in a way. Who doesn’t think they have a brilliant memoir in them? But the question isn’t rhetorical: Many of us don’t think that and a lot of the rest are kidding themselves. “I have absolutely no sense of my life as a narrative with form, or indeed as a narrative without form,” Strawson writes. And yet he seems to be living quite well.

Strawson’s biography is a useful case study. His father was P.F. Strawson, the Waynflete Professor of Metaphysical Philosophy at Oxford, one of the most eminent philosophers of the late 20th century. Strawson senior is known for his humane defense of freedom and responsibility and for a conception of ourselves as fundamentally embodied beings. His son Galen was precocious, gripped from the age of 4 by puzzles of infinity and death. After a detour through Islamic Studies at Cambridge, Strawson junior went to Oxford to read philosophy, becoming a well-known author and professor. What is he famous for? A strident attack on the possibility of freedom and responsibility and an insistence that we introspect ourselves as something distinct from the human beings that bear our names.

Who doesn’t think they have a brilliant memoir in them?

The irony is perfect: Galen Strawson, arch critic of Life as Narrative, lives one of the oldest stories in the book—a philosopher’s rendition of “killing the father.” We can use this irony to separate three elements in Life as Narrative and to extricate ourselves, a little, from the grip of failure. The first element is the conjecture, nicely verbed by Strawson, that we are bound to “story” ourselves, presenting our lives as coherent narrative wholes. The other elements are ethical: that a good life must form a coherent narrative, and that it must be one whose subject tells that narrative to himself. Strawson’s own example pulls the last two elements apart. His life can be told as a story, more or less, but I know from correspondence with him that the story isn’t one that Strawson tells. If we trust his testimony, he does not story himself at all. Strawson is an exception to the psychological conjecture that we are bound to tell our lives in story form. If his life is good, he shows that the subject of a good life need not tell its story—even if there is a story to be told.

Now, one example is just that. But there are plenty more. Like me, you may be one of them, living from day to day and year to year without much sense of narrative direction. Strawson cites illustrious forebears, among them Iris Murdoch and the mercurial pioneer of the personal essay, Michel de Montaigne. To these we might add Bill Veeck, who served in the army, managed baseball clubs to failure and success, and fought to integrate the American League. All three had lives that were dense with things worth doing, some done exceptionally well, along with miscues, misdirections, swerves. That’s enough for a good life, without the need for a story that ties it all together. To see one’s life as a narrative arc, heading for a climax that it may or may not reach, is to see it as a potential failure; but one need not live that way.

Consider Murdoch, who studied classics, worked in the civil service in World War II, became a philosopher for 10 years, then quit to be a full-time novelist. Throughout, she was pansexual and polyamorous, despite her long marriage to John Bayley, an English professor at Oxford. There were plenty of hurt feelings. Murdoch went on to write 26 novels in 41 years, but while that makes for consistency, to a point, it doesn’t amount to a direction. She shifted as a novelist, trying different things, but there was no pattern of evolution—except that the novels got longer, until the last. They did not get better. I’m not alone in thinking her most successful was Under the Net; it was also her first. Nor can it be said that Murdoch’s two careers, as philosopher and novelist, merged happily. She resisted—I think rightly—any blurring of the lines between her often difficult work in philosophy and the “innumerable intentions and charms” of fiction. It’s not that Murdoch’s life was incoherent—though the web of her affairs isn’t easy to unravel. But it didn’t have the kind of narrative structure proponents of Life as Narrative approve, the sort that has “an Agent, an Action, a Goal, a Setting, an Instrument—and Trouble.” Nor does Murdoch seem to have thought otherwise. On the Life as Narrative view, a good life must form a coherent, linear story, one its subject tells herself. Murdoch is an exception to that—as are Strawson, Montaigne, and Veeck.

In light of such examples, you may wonder why the view is so widely held. I think the answer turns on the amorphous open-endedness of storytelling. A question that is now overdue: What do the advocates of Life as Narrative mean by “narrative,” anyway? They gravitate to stories of the simplest and most linear form. “For centuries there’s been one path through fiction we’re most likely to travel—one we’re actually told to follow,” writes the critic and author Jane Alison in Meander, Spiral, Explode, “and that’s the dramatic arc: A situation arises, grows tense, reaches a peak, subsides.” It’s in these terms that Life as Narrative is framed; they are what give it substance. The claim is that you should, and do, aspire to tell the story of your life as a single, integrated arc, “something that swells and tautens until climax.” (“Bit masculo-sexual, no?” Alison jokes.)

As Alison observes, however, storytelling comes in countless forms, many of them nonlinear. Stories meander, spiral, explode, and branch, or divide into cells. In The Echoing Green, the journalist Joshua Prager unwinds the knot that binds Ralph Branca and Bobby Thomson together. Anyone who knows anything about Branca knows that he threw the fastball that Thomson hit to win the National League pennant in 1951; many know nothing more. What Prager tells is not a story of redemption, of failure expunged; it is too late for that. Instead we learn what we knew all along: how much more there was to Branca’s life, and to Thomson’s, than the moment that connects them. Prager fights the inertia of retrospection that sees each episode of Branca’s and Thomson’s lives as what was going to happen all along. He contests it in the structure of the book—doubling back on his protagonists’ lives in detours that suspend the sequence of events—and in the structure of his sentences, which explode or invert expected syntaxes, as if to step outside of time.

Or take Nicholson Baker’s novella The Mezzanine, whose plot consists of a journey on an escalator during lunch hour, and whose interest lies in its delightful digressions, as the narrator reflects on shoelaces, straws, deodorants, urinals, paper towels, childhood memories, and escalators themselves. There are digressions within digressions, footnotes that run for paragraphs or pages in a masterpiece of storytelling that goes precisely nowhere.

If Life as Narrative meant only that there is value in seeing one’s life as a story with one or more of these endlessly various forms, it would be harmless enough. Hence its air of plausibility. But in practice, Life as Narrative means a need for unity and linearity, for incidents that build to a fulfilling climax, won or lost; that’s what its proponents demand. The prospect of stories like the ones I’ve just recounted undercuts their principal argument: that telling the story of one’s life is a path to self-understanding and self-formation. Perhaps it is. But there are countless ways to make sense of yourself, even through stories, without picturing your decades as a quest. Why not bricolage, the character study, the riff?

What’s more, there is a downside to unified, linear narrative: it is by squeezing your life into a single tube that you set yourself up for definitive failure. Projects fail and people fail in them. But we have come to speak as if a person can be a failure—as though failure were an identity, not an event. When you define your life by way of a single enterprise, a narrative arc, its outcome will come to define you.

It’s a tendency we should fight. Whatever story you tell about yourself, however simple and straightforward, there is endlessly more to your actual life. As Joe Moran insists: “To call any life a failure, or a success, is to miss the infinite granularity, the inexhaustible miscellany of all lives … A life can’t really succeed or fail at all; it can only be lived.” The narrator of The Mezzanine is carrying a copy of Meditations by Marcus Aurelius, the Stoic philosopher who was emperor of Rome. At one point, he recalls a sentence he has read: “Observe, in short, how transient and trivial is all mortal life; yesterday a drop of semen, tomorrow a handful of spice and ashes … Wrong, wrong, wrong! I thought. Destructive and unhelpful and misguided and completely untrue!” What makes the narrator’s life worth living is not some grand narrative, running from conception or birth to inevitable death; it is the countless little thoughts and deeds and gentle, joking interactions that occupy day after day after day. If you pay attention, Baker intimates, there’s enough in a single lunch hour to fill a book.

The more you appreciate the sheer abundance of incident, the more you’ll see any life as an assortment of small successes and small failures, and the less prone you will be to say, despairingly, “I’m a loser”—or with misplaced bravado, “I’m a winner!” Don’t let the lure of the dramatic arc distract you from the digressive amplitude of being alive.

Kieran Setiya is a philosopher at MIT, working mainly in ethics, epistemology, and the philosophy of mind. He is the author of Practical Knowledge, Reasons without Rationalism, Knowing Right From Wrong, and Life is Hard.