Droplets That “Come to Life” 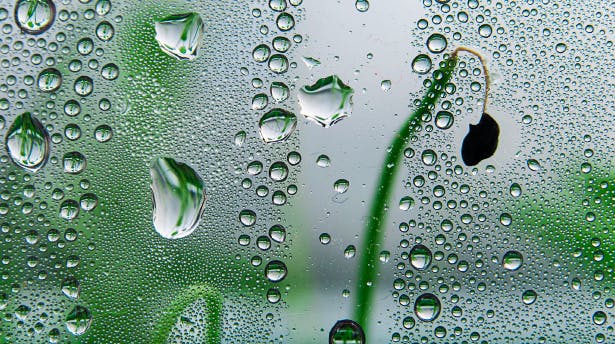 As bored children buckled in backseats, we grow familiar with the way raindrops on glass slide together and coalesce. At pasta-cooking age, we learn that oil droplets in water also glom together, forming bigger droplets until they all become a single globule in the middle of the pot. Intuition tells us that droplets like to combine, even if we don’t know why. (They do it to minimize surface area, since their constituent molecules prefer one another’s chemical company to the surrounding fluid’s.)

Recently, researchers discovered that these familiar droplet dynamics are only part of the story. As I describe in a Quanta article this week, droplets that are “chemically active,” using sunlight or some other energy source to constantly cycle molecules into and out of the surrounding fluid, behave in unexpected ways that might have played a critical role in the genesis of life on Earth.

Unlike the familiar droplets of our youth, active droplets grow to roughly the size of a cell and stop growing; they also spontaneously divide, producing daughter droplets. The findings, by a team of biologists and physicists in Dresden, Germany, have revived a hypothesis, first suggested in 1924, that liquid droplets in early Earth’s primordial soup were the primitive precursors of the first cells. As these active-droplet “protocells” divided and proliferated, evolution could have acted on them, gradually making them more complex and leading to the rise of living cells.

The physics of active-droplet division has so far only been studied on paper and in simulations, though experiments are under way. However, something akin to the predicted effect may have already been observed decades ago—a serendipitous connection that came to light as I was reporting the story. Seeking outside comment on the Dresden group’s work, I contacted the biochemist David Deamer of the University of California, Santa Cruz, a prominent proponent of the competing “membrane-first” hypothesis about the origin of life. Deamer argues that protocells would have required fatty-acid membranes like those that encase modern cells—structures more complicated than droplets, and which have no obvious method of proliferation. But when Deamer read about the Dresden group’s predictions about active droplets and their protocell hypothesis, he remembered “something remarkable” he had once seen in droplets that he extracted from the Murchison meteorite, which crashed down on Australia in 1969.

In the 1980s, Deamer discovered membrane-forming molecules in this same space rock—a possible sign that these chemical ingredients were abundant on early Earth, as required by the membrane-first hypothesis. But Deamer made another observation that he never published. He was looking under a microscope at oily hydrocarbon pigments extracted from the Murchison specimen. “When I turned on the light in the microscope, I was absolutely astonished to see these droplets—it looks as though they come to life,” he said. “They start to move over the medium—the medium is just a glass slide, of course—and they begin to have a kind of circulation of material in the interior. And then the globule will stretch and actually break into two smaller globules, which then crawl away.”

The behavior “so extraordinarily interested” Deamer 30 years ago that he recorded it on video. When I discussed the Dresden team’s research with him this month, Deamer said, “I think I’ll write to these guys and tell them about this.”

Frank Jülicher, an author of the new paper, was eager to see Deamer’s footage of droplets dividing in the wild. “This is very fascinating,” he told Deamer and me in an email.

After mulling over the physics at play in the extraterrestrial droplets, Jülicher said, “The flow and ‘division’ in this picture stems from an active wetting process.” The light triggers a chemical reaction that produces molecules that wet the microscope slide, he explained. This in turn creates a gradient in the surface tension, causing the droplet material to circulate and move. “The physics is quite different from the droplet division we study in our paper, which occurs without wetting,” Jülicher told me, adding that a key difference is that the droplets his team studied are chemically active and stationary at the same time—much more like cells.

Both droplet division mechanisms have been little studied so far, and both are novel examples of so-called “out-of-equilibrium” physical behaviors. Even if Deamer’s decades-old footage displays a different effect from the one studied by the Dresden researchers, it may be an indication that droplet division is more widespread than previously known, lending support to the notion that it may have played a role in the origin of life.

In any case, it’s not the kind of droplet behavior you get to see every day. “It was really wonderful to watch,” Deamer said.