A lizard that both lays eggs and gives birth to live young is helping scientists understand how and why these forms of reproduction evolved. 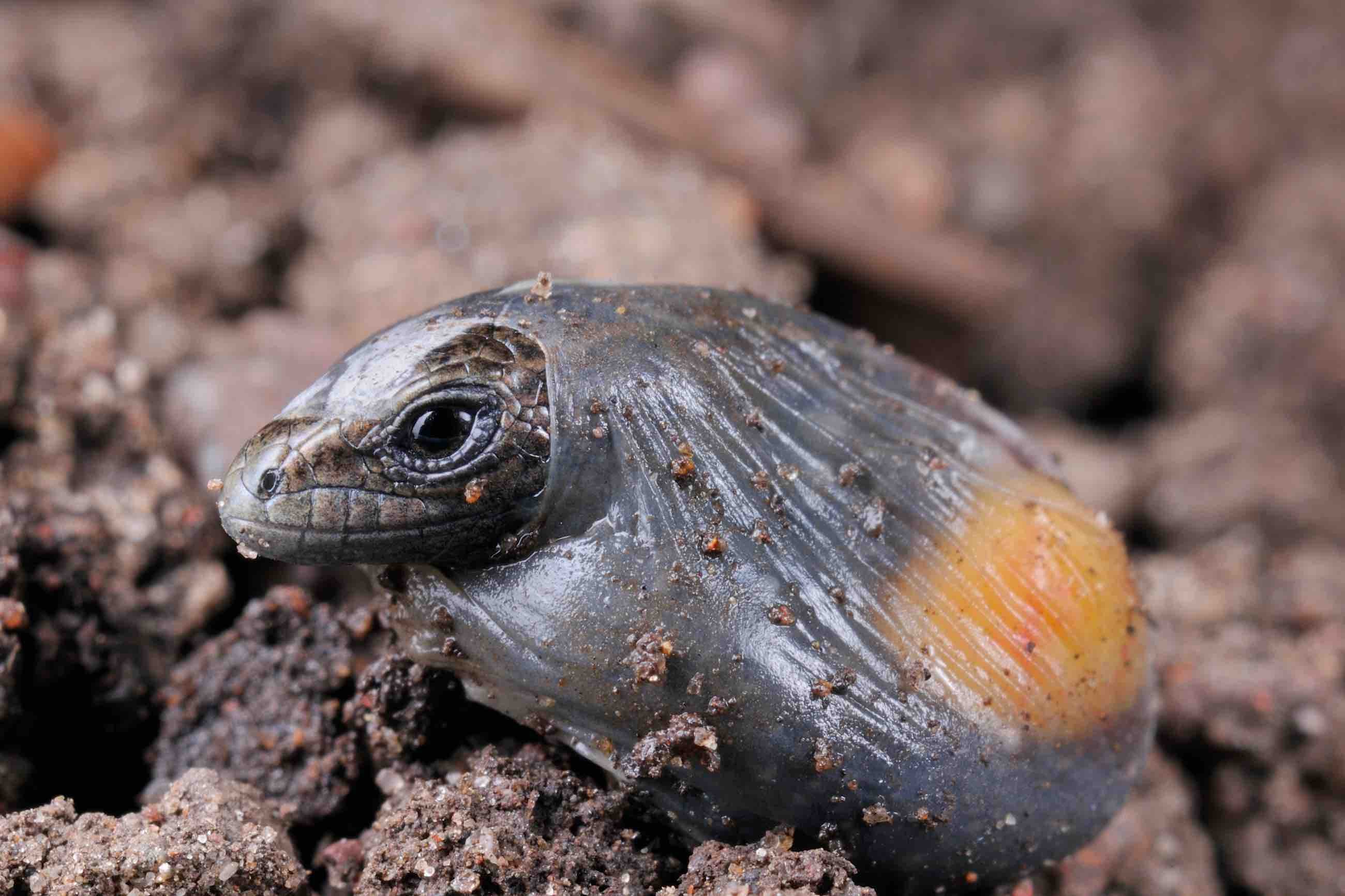 The old riddle, “Which came first, the chicken or the egg?” is relatively easy to answer as a question about the evolution of birth in animals. Egg laying almost certainly came before live birth; the armored fish that inhabited the oceans half a billion years ago and were ancestral to all land vertebrates seem to have laid eggs. But the rest of the story is far from straightforward.

Over millennia of evolution, nature has come up with only two ways for a newborn animal to come into the world. Either its mother lays it in an egg, where it can continue to grow before hatching, or it stays inside its mother until emerging as a more fully formed squirming newborn. “We have this really fundamental split,” said Camilla Whittington, a biologist at the University of Sydney.

Is there some primordial reason for this strict reproductive dichotomy between egg laying (oviparity) and live birth (viviparity)? When and why did live birth evolve? These are just some of the questions that research from March 2020— including studies of a remarkable lizard that can lay eggs and bear live young at the same time—is exploring, all the while underscoring the enormous complexity and variability of sexual reproduction.

Early female animals laid eggs in the sense that they released their ova into the world, often thousands at a time. Sperm released by males then fertilized some of these eggs in a hit-or-miss fashion, and the resulting embryos took their chances on surviving in the hostile world until they hatched. Many creatures, particularly small, simple ones, still reproduce this way.

But as animals became more complex, vertebrate species—including many amphibians, reptiles and even some fish, like sharks—turned to a less chancy strategy: internal fertilization. Females could then ensure that a higher percentage of their eggs would be fertilized, and they could get more selective about which males they would breed with. The embryo could develop safely inside its mother until she eventually released it inside a protective shell.

Live birth evolved later—and more than once. In reptiles alone, it has evolved at least 121 separate times. And although scientists don’t know exactly when the first live animal emerged from its mother, they do know what forces may have been driving the transition from egg laying and what evolutionary steps may have preceded it.

Both birth methods get the job done, of course, but they present contrasting advantages and difficulties. Crucially, egg-laying mothers can be physically free of their offspring sooner. Birds, for instance, have never evolved live birth, possibly because the energy cost of flying while pregnant is unsupportable. Egg layers can also generally have more offspring in a single litter, since the size of the mother’s body isn’t a constraint. This advantage may partially offset the risks of leaving eggs exposed to predation and the elements.

Live-bearing mothers, on the other hand, can house their embryos and protect them from predators and environmental dangers for longer. But they do so at their own peril: Being pregnant exposes them to more predation and puts them at considerable risk from the embryo itself. “The embryo is partially foreign, and its tissues are invading into the tissues of a mom,” said Chris Organ, a biologist at Montana State University. “It’s wild to think about.” For the length of her gestation, the mother balances on a tightrope, diverting resources to a foreign being while keeping herself healthy.

The major difference between oviparity and viviparity therefore centers on a strategic evolutionary decision about when the mother should deposit her embryos. If she deposits them early, she’s an egg layer, and if she deposits them late, she’s a live bearer. Most reptiles, for instance, deposit their embryos just a third of the way through their development.

“Between true egg laying and live bearing there’s a whole range of possible times [to deposit the embryo], but it’s probably disadvantageous to do that,” Whittington said. “We call it a fitness valley.” Animals that try to give birth somewhere in that fitness valley might incur all the risks of egg laying and live bearing without reaping the benefits of either. “We think that, evolutionarily, that’s quite disadvantageous,” she said.

(Marsupials found a novel solution to balancing these risks: The young they give birth to are practically fetal in their immaturity, but they then finish their development inside their mother’s pouch. In this way, the mother can provide the protective advantages of carrying her young to full term without needing to accommodate a full-size newborn inside her body.)

The Right Temperature for Males

Scientists are still learning about the developmental constraints and requirements of these birth strategies. Consider, for instance, the thickness of an eggshell. Because oxygen must make it through a mother’s bloodstream and into the egg, a thin shell is advantageous before it is laid. In the outside world, though, a thicker shell is helpful to protect against predators. An egg laid too early, then, might be too thin to survive, and one laid too late might be too thick to meet the exponentially growing oxygen demands of the embryo. It’s a finely tuned balance.

In a paper published in Nature in 2009, Organ and his colleagues demonstrated that before a species could evolve live birth, it probably had to evolve the ability to determine the sex of its offspring genetically. The sex of many creatures is circumstantial: Environmental factors, particularly temperature, can determine whether the embryo develops as male or female. Organ’s team showed a strong statistical association between using genes to determine sex and giving birth to live young. “It’s something that biologists knew in an observational way, but hadn’t ever been rigorously tested,” Organ said.

Consider sea turtles. “They can barely move around on land, but they still come to the beach to lay eggs,” he said. If they laid all their eggs in the water, they would be less likely to get a variety of males and females because the temperature gradient there is much smaller than it is on land.

But once a marine species has evolved the ability to determine sex through genes, it no longer needs to venture onto land and can fully adapt to its aquatic life. As Organ and his co-authors wrote in their paper: “Freed from the need to move and nest on land, extreme physical adaptations to a pelagic lifestyle evolved in each group, such as the fluked tails, dorsal fins and wing-shaped limbs of ichthyosaurs [a group of prehistoric marine reptiles].”

At the time of that publication, scientists thought that live birth might have evolved among the reptilian ancestors of ichthyosaurs only after they moved from the land to the sea. But the discovery of a 248-million-year-old fossil changed that. In a paper published in PLOS ONE in 2014, researchers describe the fossil of an ichthyosaur that died while giving birth. Amazingly, the fossil captured the precise moment when the newborn emerged from its mother’s pelvis headfirst. That position is telling: Most viviparous marine reptiles are born tail first so that they can continue to draw oxygen from their mother during labor. The headfirst birth position indicates the ichthyosaur inherited live birth from an even more ancient land ancestor. Land reptiles may therefore have been giving birth to live young for at least 250 million years, though the oldest fossil of live birth on dry land doesn’t date nearly that far back.

Eggs, Babies or Both

Live birth or egg laying might seem like a definitive either-or choice for a species, but surprisingly, that’s not always the case. Whittington and her team study the Australian three-toed skink (Saiphos equalis), a lizard with the remarkable distinction of being able to both lay eggs and give birth to live young. A couple of other lizard species have been known to do both, usually in different settings, but in Whittington’s laboratory, the researchers observed a three-toed skink produce a litter that consisted of three eggs and one live baby. “We were absolutely flabbergasted,” Whittington said.

In a March 2020 Molecular Ecology article, Whittington and her team describe the differences in gene expression—which genes are switched on or off— between a lizard mother that lays eggs and one that gives birth to live young. Within a single species, there are thousands of such differences between a female with an egg and one without. That’s because certain genes get switched on when it’s time for the uterus to house an egg. The same goes for a uterus that’s sheltering an embryo. Crucially, the specific genes that get switched on in these cases are very different.

“What is the genetic toolkit that enabled live birth?” said Camilla Whittington of the University of Sydney.

But in three-toed skinks, a lot of the genes that switch on when a mother makes an egg also get switched on in mothers with embryos. The finding implies that this lizard is in a transitional state between egg laying and live bearing.

Which way the lizard is evolving is impossible to say and may still be undetermined. “Evolution is a random process rather than being directed,” Whittington said. “With environmental changes, it could change the direction of selection and push it back the other way.”

The idea that the skink could be moving away from live bearing and back to egg laying is a relatively new development in the field. “Twenty years ago we thought it was difficult or impossible for egg laying to re-evolve,” Whittington said. But a growing body of research since then has shown that it may be quite common. Analyses of genetic relationships from 2013 between species revealed that certain egg layers are deeply nested within an evolutionary tree of live-bearing neighbors.

Whittington’s work is driven by a desire to understand what different live-bearing species have in common. “What is the genetic toolkit that enabled live birth?” she asked. “Are there fundamental rules about viviparity? Does it use the same genetic instructions when it evolved? Do [different species] have the same problems?”

The three-toed skink is not the only remarkable creature she studies as she searches for answers. Sea horses are the only known animals in which the males become pregnant: A female transfers her egg into her mate’s pouch for fertilization and development. Whittington’s work with sea horses has revealed that the males activate the same genes that females of many other species do to bear live young, which Whittington argues is remarkable. “We’re talking about different sexes. We’re talking about completely different tissues. We’re talking about this trait having evolved in completely different species and millions of years apart,” she said. “It’s like having these amazing naturally replicating evolution experiments that have been running for millions of years.”

Lead image: Scientists are piecing together how and why live-bearing animals evolved from egg-laying ones—and why they might evolve in the other direction on rare occasions. Credit: Nature Picture Library / Alamy Stock Photo