Embryo Cells Set Patterns for Growth by Pushing and Pulling

Patterns that guide the development of feathers and other features can be set by mechanical forces in the embryo, not just by gradients of chemicals. 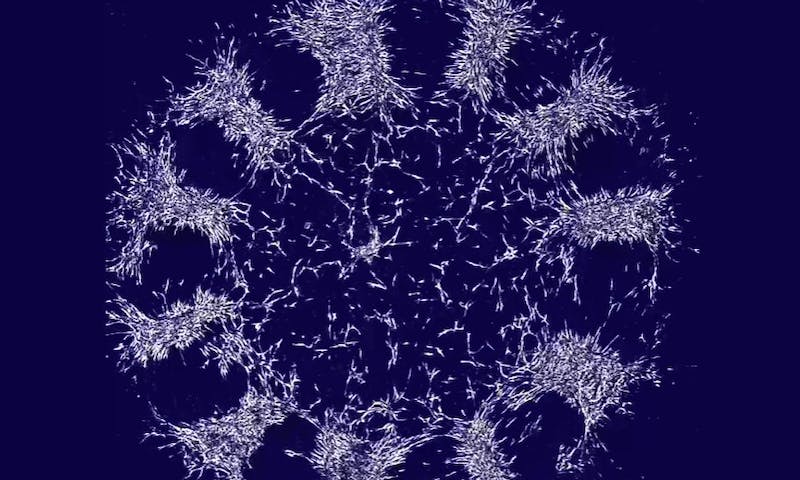 One of the longest-standing questions in biology is how a living thing that starts as an embryonic blob of uniform cells morphs over time into an organism with diverse tissues, each with its own unique pattern and characteristics. The answer would explain how a leopard gets its spots, a zebra gets its stripes, trees get their branches, and many more mysteries of pattern development in biology. For more than half a century, the favored explanation has been an elegant model based on chemical signaling proposed by the mathematician Alan Turing, which has had many successes.

But a growing number of scientists suspect that Turing’s theory is only part of the story. “In my opinion we’ve been blinded to how widely it should be applied simply because of its beauty,” said Amy Shyer, a developmental biologist at Rockefeller University. In her view, physical forces of contraction and compression that act on cells as they grow and divide could also play a central role.

And now she has proof of it. In a paper published in Cell  in May of 2022, Shyer, her co-senior author and fellow developmental biologist Alan Rodrigues, and their colleagues showed that mechanical forces could induce embryonic chicken skin to create follicles for growing feathers. Just as surface tension can pull water into spherical beads on a glass surface, so too can the physical tensions within an embryo set up patterns that guide growth and gene activity in developing tissues.

As an organism grows and develops, the cells in its tissues pull and push on each other and on the supportive protein scaffolding (extracellular matrix) to which they are intricately linked. Some researchers have suspected that these forces, coupled with changes in the pressure and rigidity of the cells, might direct the formation of complicated patterns. Until now, however, no studies were able to tease apart the effect of these physical forces from the chemical stew in which they simmer.

Pulling Out a Pattern

In the laboratory of morphogenesis at Rockefeller University that they jointly lead, Shyer and Rodrigues removed the skin from a chicken embryo and disintegrated the tissue to pull apart the cells. Then they placed a drop of the cellular solution into a petri dish and let it grow in culture. They watched as the skin cells self-organized into a ring on the floor of the dish—like a 2-D version of the ball of cells that the embryo normally becomes. Pulsating and contracting, the cells pulled on collagen fibers in the extracellular matrix that they assembled around themselves. Over 48 hours, the fibers gradually rotated, bunched together, and then pushed each other apart, forming bunches of cells that would become feather follicles.

“This was such a clean, simple experimental setup, where you could see a beautiful pattern come out and quantitatively control it,” said Brian Camley, a biophysicist at Johns Hopkins University who was not involved in the study.

Later, by adjusting the rate of cell contraction and other variables, the researchers showed that physical tension in the embryonic mass directly affected the pattern. “I think the biggest surprise was the way the cells interacted with the extracellular matrix in this very dynamic way, in order to create these patterns,” Rodrigues said. “We realized that it is a reciprocal dance between the two.”

“This suggests that contractility could be sufficient to drive pattern formation,” Camley said. “That’s a really new essential piece.”

The mathematician D’Arcy Wentworth Thompson proposed that physical forces might direct development all the way back in 1917. In his book On Growth and Form, Thompson described how torsional forces govern horn and tooth formation, how eggs and other hollow structures emerge, and even the similarities between jellyfish and drops of liquid.

But Thompson’s ideas were later eclipsed by Turing’s explanation, which connected more easily to the emerging understanding of genes. In a 1952 paper, “The Chemical Basis of Morphogenesis,” published two years before his death, Turing suggested that patterns like spots, stripes, and even the sculpted shapes of bones in the skeleton were the result of a swirling gradient of chemicals called morphogens that interacted with each other as they diffused unevenly throughout the cells. Acting as a molecular blueprint, the morphogens would kick on genetic programs that caused fingers, rows of teeth, or other parts to develop.

Turing’s theory was beloved among biologists for its simplicity, and it soon became a core tenet of developmental biology. “There is still a strong molecular and genetic view of most mechanisms of biology,” Rodrigues said.

But something was missing from that solution. If chemical morphogens drive development, Shyer said, then scientists should be able to show that one precedes the other—first come the chemicals, then the pattern.

She and Rodrigues were never able to show this in the lab. In 2017, they took small slices of chicken embryo skin and watched closely as the tissue bunched up in preparation to form a follicle. Meanwhile, they tracked the activation of the genes involved in follicle formation. What they found was that gene expression happened around the same time that the cells bunched up—but not before.

“Instead of ‘gene expression first, then mechanics later,’ it was sort of like mechanics was generating these shapes,” said Shyer. Later, they showed that even removing some of the gene-regulating chemicals didn’t disrupt the process. “That opened a door to say, ‘Hey, something else might be going on here,’” she said.

The Active Soft Matter of Biology

Shyer and Rodrigues hope that their work and future investigations will help elucidate the role of physics and its interplay with chemicals and genes during development.

“We are realizing that all of the molecular gene expression, signaling, and the production of forces in cell movement are just inextricably coupled to one another,” said Edwin Munro, a molecular biologist at the University of Chicago who was not involved in the study.

Rodrigues agreed. “It’s like the cells and the extracellular matrix are forming a material in and of itself,” he said. He describes this coupling of contractile cells and extracellular matrix as “active soft matter” and thinks that it points to a new way of thinking about the regulation of embryonic development happening through extracellular forces. In future work, he and Shyer hope to elucidate more details of physical forces in development and to merge them with the molecular view.

“We used to think if we just studied the genome with more and more depth and rigor, all of this would be clear,” Shyer said, but “the answers to the important questions might not be at the level of the genome.” Once it seemed that developmental decisions were made through the interplay of genes and their products within cells, but the emerging truth is that “the decision-making can be happening outside of the cell, through the physical interactions of cells with each other.”

Lead image: Isolated embryonic chicken skin cells spontaneously organized themselves in a laboratory dish. Over 48 hours, the force of the cells pulling against one another caused them to bundle together into follicles for growing feathers. Credit: Karl Palmquist.