A system of seven Earth-like exoplanets appeared to be unstable. Now their orbits have been rewritten in the music of the spheres. 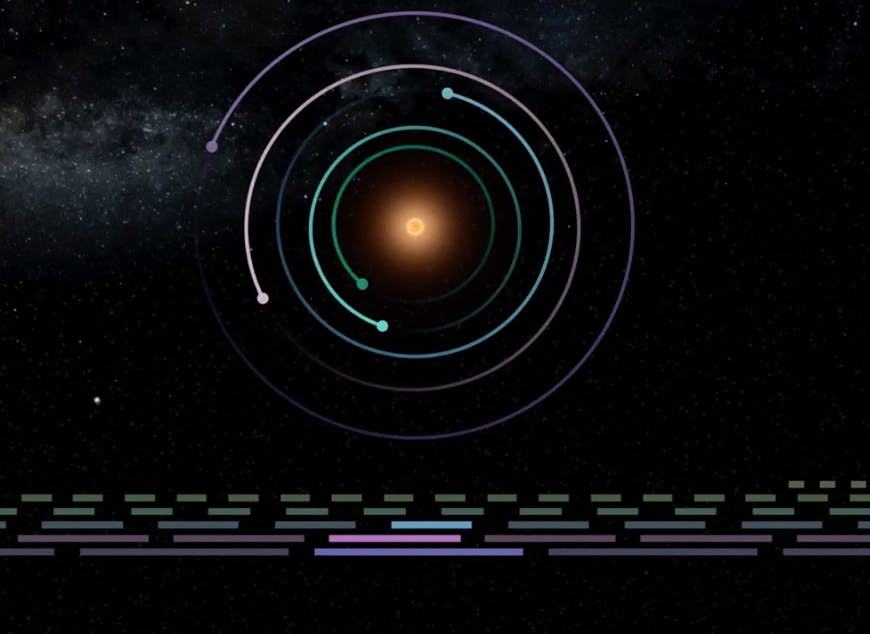 When astronomers dropped the news that nearby star TRAPPIST-1 was circled by seven planets about the size of Earth—all of which could conceivably be studied by upcoming observatories, three or more of which could have lakes and oceans on their surfaces—most of the headlines were focused on the prospect of scouring these worlds for life.

Daniel Tamayo noticed something else. The clockwork of the TRAPPIST-1 system is the most complex case yet of what astrophysicists call a resonant chain, where the “years” of each orbiting body relate to one another as simple ratios. For every eight times the innermost world races through its day-and-a-half-long orbit, the next planet goes around roughly five times, the next one after that orbits three times, and the next one two times. And so on.

All this interlocking complexity fascinated Tamayo, an orbital dynamicist at the Canadian Institute for Theoretical Astrophysics. In the February Nature paper that announced the seven planets, the authors briefly mentioned that gravity could pull the orbits of these planets askew in as little as a million years, according to initial simulations. That timescale is far, far shorter than the billions of years that have elapsed since the TRAPPIST-1 system formed.

Now a new paper published by Tamayo and colleagues in The Astrophysical Journal Letters has chipped away at the mystery. By simulating the protoplanetary disk that birthed the planets, Tamayo offers a way for the resonant chain of planets to slowly link up, to migrate inward and to stay stable for around 50 million years—not long enough to explain why we see a stable arrangement today, but still an improvement.

“I think it’s awesome that people are actually running these dynamic simulations,” said Rodrigo Luger, an astronomer at the University of Washington who has led an effort to characterize the orbit of TRAPPIST-h, the least-studied member of the system. David Kipping, an astronomer at Columbia University, agrees in an email to Quanta. “TRAPPIST-1 is an excellent dynamical laboratory for these tools,” he writes. “The authors make a convincing case for this slow convergent migration scenario.”

There’s more than one way to appreciate the results. While Tamayo was working on his simulations, he was approached by Matt Russo, a fellow postdoc and jazz guitarist who thought the TRAPPIST-1 resonances looked familiar from music theory. Now, coordinated with the release of Tamayo’s paper, Russo, Tamayo, and the musician Andrew Santaguida have teamed up to translate the system’s intricate arrangement of passing worlds into a musical composition.

The seventh planet, h, orbits about once every three weeks. Sped up some 200 million times and expressed in sound waves, that frequency is a C note. From there, the known ratios between planets determine every other planet’s signature note. Together the notes form a major ninth chord. “It’s really remarkable that it worked out like that,” Russo said. “Even with a different pattern of resonances, you wouldn’t get a chord that sounds as good.”

On top of that, the team added drumbeats for whenever an inner planet overtakes an outer neighbor—moments that correspond to close gravitational interactions among the planets. Compared to human percussion, Russo said, “It’s a super-creative drummer. It’s doing something that nobody else would think of.”

The team next plans to apply a similar treatment to the large Galilean moons of Jupiter. But these moons have simpler ratios, corresponding to just the same note in different octaves. “You don’t get this lush chord like with TRAPPIST,” Russo said.

While TRAPPIST-1 is the longest known chain of resonant orbits, there are other resonant exoplanet systems worth trying out too, Tamayo said—systems that also pose their own dynamical problems. “All I do is study these resonances,” he said, “but it’s such a hard thing to communicate to people and tell them why it’s interesting.”