The unintentional creation of “sturddlefish” hybrids may illuminate the genomic mechanisms that govern whether species can interbreed. 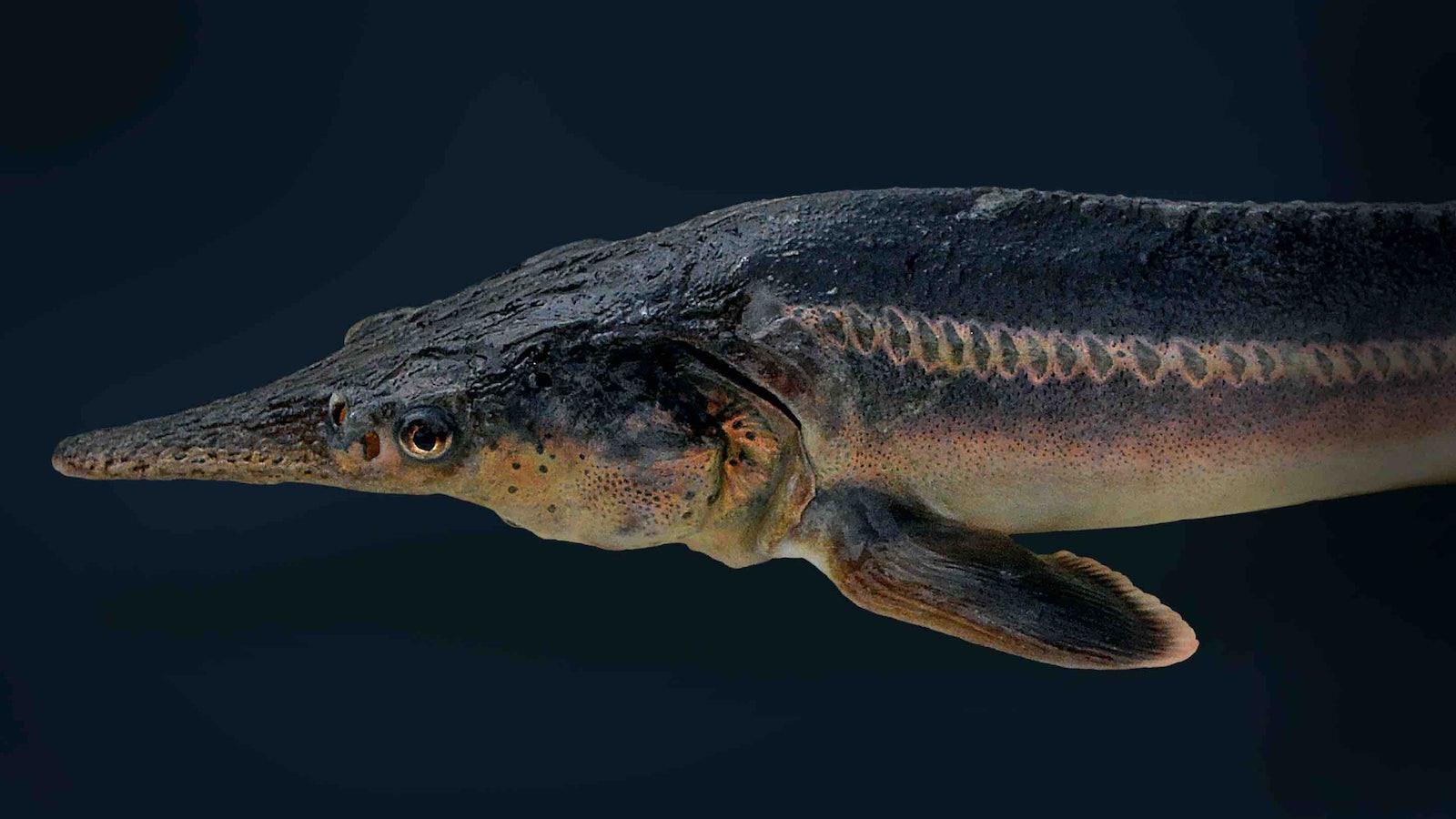 Their mothers were Russian sturgeons—large carnivores with creamy bellies, short, rounded snouts, and green, dragonlike scales. Their fathers were American paddlefish—smooth-skinned filter feeders with sensitive, elongated snouts. “Sturddlefish,” as these hybrids have been nicknamed since researchers in Hungary announced their creation in July of 2020, go shockingly far beyond classic crossbreeds like mules and ligers, whose parent species sit close together on the tree of life. Sturddlefish result from the merger of different taxonomic families.

“I’m still confused. My jaw is still on the floor,” said Prosanta Chakrabarty, an ichthyologist at Louisiana State University and the curator of fishes at its Museum of Natural Science. “It’s like if they had a cow and a giraffe make a baby.” Then he quickly corrected himself, because the lineages of those two ruminants split only a few dozen million years ago. The evolutionary paths of paddlefish and sturgeons diverged 184 million years ago. For those fish to breed is more like “if a human came out of a platypus egg,” he said.

Hybrids are often shrugged off as freaky living violations of the rules that keep species distinct. But scientific interest in them has grown with mounting evidence that in nature hybrids can be important both in the emergence of new species and in the conservation of species on the brink of extinction.

Because the new sturddlefish are so radical, they are shaking up scientists’ understanding of what kinds of hybrids may be possible and which species might be most prone to interbreeding successfully. Studies of the new fish could also be poised to provide deep insights into how genomes work more generally.

The hybridization of these sturgeons and paddlefish was unintentional, but it wasn’t precisely an accident. In fact, the researchers who arranged it were counting on the cross to fail so that they could learn something about how sex is determined in Russian sturgeons.

In mammals and birds, male and female sex is usually determined by sex-specific genes on sex-specific chromosomes. But among fish, anything goes: Some fish have sex chromosomes, while others take sexual development cues from their environments or transition from one sex to the other. No one is quite sure how sturgeons do it, but many are keen to know because sturgeon eggs are highly prized as caviar (some high-end caviar sells for more than $180 an ounce). If researchers can figure out how to farm Russian sturgeon stocks that are mostly female, it could alleviate a notorious problem with overfishing of wild populations.

One way to determine what sets the sex of Russian sturgeons is gynogenesis—a form of asexual reproduction in which an egg and a sperm fuse, but only the mother’s genes are transmitted to the resulting embryo. “You want to activate the egg, but you don’t want any DNA contribution from the male,” explained Ken Semmens, an aquaculture biologist at Kentucky State University. Gynogenesis sometimes occurs naturally among fish, but marine biologists and the aquaculture industry also use it as a tool for studying sex determination: All the offspring are essentially half-clones of their mother, so if all of them are females, then you know that females are determined by having a pair of identical sex chromosomes—as in mammals. If the offspring are all males, then females are the sex with two different chromosomes (which is the case in birds). If only some are males … well, then some environmental factor is also in play.

In 2019 at the Research Institute for Fisheries and Aquaculture in Hungary, the aquaculture engineer Jenő Káldy, along with the fish ecologist Attila Mozsár, was experimenting with gynogenesis on Russian sturgeons under the direction of the aquacultural geneticist Miklós Bercsényi of the University of Pannonia. To that end, the Hungarian researchers needed sperm that couldn’t possibly fertilize the sturgeon eggs.

Paddlefish sperm looked like a safe bet. American paddlefish (Polyodon spathula), which are diploid, have 60 pairs of chromosomes, while Russian sturgeons (Acipenser gueldenstaedtii), which are tetraploid, have four sets totaling about 250 chromosomes (the chromosomes are so numerous and some are so small that it’s hard to count them reliably). Nearly 200 million years of independent evolution should have seeded the two species’ DNA with countless genetic mismatches and incompatibilities—from missing and added genes, to rearrangements and relocations of genes, to mutational tweaks to gene expression. It seemed certain that hybrid cells would struggle to figure out how to line up their chromosomes during cell division and what genes to turn on or off.

Moreover, aquaculturists had previously used sperm from paddlefish to trigger gynogenesis in other sturgeon species and vice versa, and none of those experiments had ever produced crossbreeds. The Hungarian team had every reason to be confident that their fish could not hybridize.

But when Káldy and Mozsár exposed the Russian sturgeon eggs to healthy paddlefish sperm as a control for their experiment, they were stunned to see that the vast majority of the eggs hatched into live hybrid offspring. “They called me and told me that something’s wrong, because all of the control is living,” Bercsényi recalled. “I said, ‘Jenő, you made a big mistake. Please repeat the experiment.’” And so Káldy did—but the result was the same.

“We never wanted to play around with hybridization,” said Mozsár. “It was just a negative control, which found, somehow, a way to live.”

At first, Káldy didn’t believe the fry were hybrids: Because they looked just like regular sturgeons as youngsters, they might have come from spontaneous gynogenesis or some other “more reasonable explanation,” he said. But a genomic analysis by Gyöngyvér Fazekas, a colleague at the Research Institute for Fisheries and Aquaculture, and Balázs Kovács, an aquacultural geneticist at Szent István University, confirmed that the team did indeed have more than a hundred hybrids growing in their tanks.

As Bercsényi’s team described it in their July 2020 paper in Genes, some of the hybrids have three copies of each chromosome, a half-genome from each parent. But other hybrids have five copies of each chromosome: They somehow received the equivalent of their sturgeon mom’s full genome plus a half-genome from their paddlefish dad. The bodies of the sturddlefish combine characteristics from both parents, but the ones with more sturgeon DNA look more like their mother—they have more of the distinctive sturgeon scales called scutes, for instance.

How can these seemingly impossible hybrids exist?

Chakrabarty’s hunch is that the answer lies in the relatively slow rate of evolution that occurs in this group of fish. The Polyodontidae (paddlefishes) and Acipenseridae (sturgeons) are the last living families in the order Acipenseriformes, and studies suggest that both have very slow mutation rates. Despite the eons of independent evolution separating them, maybe their genomes just haven’t diverged enough to prohibit hybridization. But that raises the question of why previous hybridization attempts between sturgeons and paddlefish failed.

“It’s like if they had a cow and a giraffe make a baby,” said Prosanta Chakrabarty of Louisiana State University.

Semmens leans toward a different hypothesis: that the successful hybridization has to do with the Russian sturgeon’s extra-large genome. Genomicists think that the ancestors of sturgeons were diploid until all their chromosomes doubled and the fish became tetraploid. But only some species—including Russian sturgeons—retained their extra chromosomes. As a result, it’s possible that the Russian sturgeon’s genome carries enough redundancies and variations on genes to help the hybrids survive mismatches in their parents’ DNA.

Back in the 1980s, Semmens attempted to make a sturddlefish by combining sperm from shovelnose sturgeons with eggs from paddlefish; the eggs started to develop but then quit. Because both of those fish species are considered diploids, neither had “extra” DNA to offer as a tetraploid might. “Perhaps that’s the reason why their hybrid worked and our hybrid didn’t,” Semmens mused.

Getting to the bottom of this mystery will inevitably reveal a lot about how reproductive barriers work at the genetic level, not just in primitive fishes but in other animals. “Studying this type of hybrid can help a lot for understanding evolutionary processes,” Bercsényi said, “and they offer good tools also for studying the function of the genes.” For instance, sturgeons and paddlefish both have lots of super small microchromosomes that are poorly understood. Chakrabarty is eager to see if sturddlefish can help researchers understand how microchromosomes function.

Bercsényi’s team doesn’t plan on making any more sturddlefish right away, but they will be collaborating with researchers in Japan and elsewhere to study them. If the hybrids prove hardier in captivity than their parent fish, or if they produce more eggs, it’s more than likely that someone will want more of them.

Right now, though, it’s not clear whether the hybrids will even produce eggs or whether those eggs will be viable, Bercsényi cautioned. Ichthyologists can’t even tell the males and females apart before the fish are two years old. Given the slow maturation of both parent species, Bercsényi says it will take a “minimum of three years” of raising the fish in warm water (20 degrees Celsius) before it’s known whether they are fertile.

Lead image: Because of presumed incompatibilities in the genomes of Russian sturgeons and American paddlefish, researchers had assumed that hybrids of the fish would not be viable. Yet “sturddlefish” like this one were created unintentionally during recent experiments. Credit: Jenő Káldy, edited by Quanta Magazine