Fake News Is an Old Problem 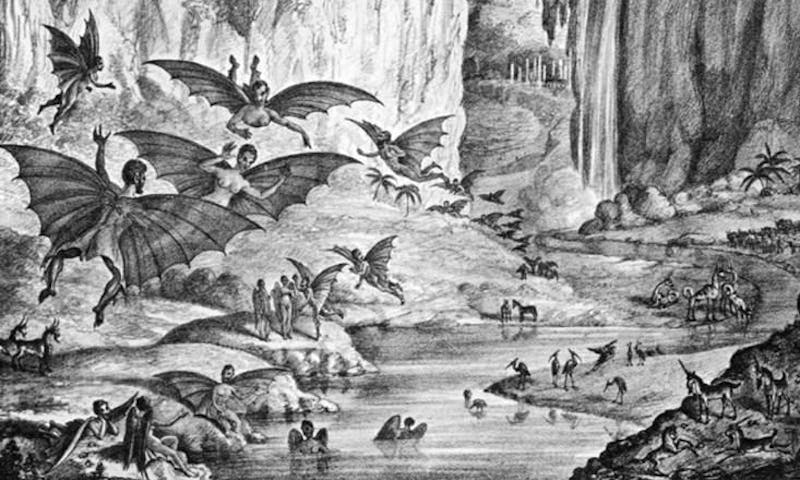 In a presidential campaign that seemed to break rules of political decorum daily, one of the more alarming developments was the rise of a new kind of media: fake news. “Obama FURIOUS After Judge Jeanine Calls Him A Terrorist On Live TV!!!” proclaimed TrumpVision365.com, a fake-news site run by young people in Macedonia. “STOP HER NOW: Hillary Is Trying To Steal The Election Through Arizona!” blared a fake-news site published by two 26-year-olds in California. “The Amish In America Commit Their Vote To Donald Trump; Guaranteeing Him A Presidential Victory,” according to a parody site whose founder is concerned that many Trump supporters believe his hoaxes. As fraudulent news came to widespread attention, some people worried that it was a serious problem, potentially a threat to democracy, which depends on informed citizens. There was even some conjecture that it might have changed the outcome of the election.

As strange as this fake news seems to our modern sensibilities, it’s not at all unprecedented. There was another time in American history when ragingly partisan opinions, and even total fabrications, were a regular part of the news media. And then there was a time when the screeds and hoaxes died out—or at least retreated to the margins. One of the major forces driving this ebb and flow is change in media technology and in the information networks that cascade out from it.

The New York Sun ran a report—in six parts!—about the discovery of life on the Moon.

American mass media developed in earnest and boomed over the course of the 19th century. The growth of the country—its population increased by a factor of 14 during this time—along with the advent of near-universal literacy dramatically expanded the market for news. As the nation extended further west, even tiny frontier outposts wanted newspapers, the key means for keeping up with the rest of the country. Improved printing presses pumped out copies faster and made newspapers more accessible to small towns. New technologies like the telegraph, telephone, and intercontinental cables made it possible to get timely updates from around the world. The spread of railroads created an economy that united the country, and put greater importance on what was happening in its far-flung parts. These forces pushed the number of newspapers in the U.S. from 432 in 1808 to over 17,000 a hundred years later—about 40 times more. In one decade alone, from the 1880s to the 1890s, the number of papers tripled, from about 4,400 to over 13,000.

With so many newspapers popping up, and with ever-larger fortunes at stake, papers became more audacious in their competition for readers. Some carved out stridently partisan niches, while many simply made up shocking or exciting stories to draw attention. The Chicago AP once reported, with no evidence, that President Grover Cleveland had been assassinated, and papers all over the country ran the hoax. The pope was apparently reported dead 22 different times in the course of five years. Mark Twain concocted a tale about “solar armor” that would cool any person wearing it; publications as prestigious as The New York Times and Scientific American fell for it. The New York Sun ran a report—in six parts!—about the discovery of life on the Moon. The media landscape was as wild as the western frontier.

This yellow journalism wasn’t just a source of entertainment; it sometimes had life-and-death consequences. Joseph Pulitzer’s New York World and William Hearst’s New York Journal famously competed to one-up each other with sensationalistic coverage of colonial Spain’s treatment of Cuba, leading the U.S. to charge into war with Spain.

In the first half of the 20th century, media tipped the opposite direction. Newspapers began a long trend toward consolidation, with the ownership of many newspapers gravitating to big corporate chains. The number of papers published in the U.S. decreased from 17,120 in 1909 to 15,570 in the 1920s, even as the national population increased by almost 50 percent. Radio burst into prominence in the 1920s and, in contrast with newspapers, quickly fell under the sway of entrenched interests. Within just a few years, the Radio Corporation of America (RCA), a major radio manufacturer, launched the National Broadcasting Company (NBC), which quickly gained a dominant position in the new medium. (CBS was founded the next year, and ABC splintered off from NBC in the 1940s.) America’s western frontier was said to be closed by the year 1890; the media born in decades after that would have no wild west period.

The emerging news giants took a much different view of facts and fakes than earlier companies did. The newer publishers and broadcasters wanted to appeal to the biggest markets they could, so they traded forceful partisanship for neutral objectivity, to avoid offending any part of their potential audiences. To burnish their images and draw image-conscious advertisers, they abandoned hoaxes in favor of accurate reporting. They put on the “mantle of authority,” in the words of journalism professor Robert Love. (Some media observers say that fake news isn’t much of a threat, since it continued all along. But there’s an important difference: Fake news stories were more common in the 19th century, and their creators largely went unpunished; they were rarer in later years, and journalists who fabricated them were often exiled from the profession. “In modern times, hoaxes have migrated from the mainstream papers to the tabloid outriders,” writes Love, “like the old National Enquirer, the new Globe, and the hoaxiest of them all, The Weekly World News, purveyor of the ‘Bat Boy’ cover stories.”)

The media retained and codified the mantle of authority until the end of the 20th century, when new technology again brought big changes. The rise of the internet and its huge array of publishing tools has returned us to an era more like the 19th century than the 20th. The internet democratized publishing to a degree never before possible—no printing press, FCC license, or transmitter required. There are again a huge number of new publishers, and as in the 19th century, some of them are happy to make things up to make a point—or just to make a buck. Young people in Macedonia and California can just as easily whip up fake articles, edit fake photos to go with them, post them online for the world to see, and promote them with a social network used by nearly 2 billion people every month. Like newsboys selling papers in the cutthroat competition of the 19th century, they study which headlines grab customers’ attention and tailor their offerings to match.

After fake news rose to prominence this month, Facebook—where fake-news sites pick up much of their readers and advertising revenue—came under significant pressure to do something. CEO Mark Zuckerberg announced steps to decrease the prominence of misinformation, but the company was hesitant to get involved; it takes significant resources to watch for and handle potentially fake news, and more importantly, addressing the situation implies that Facebook is responsible for the words that people send through their servers. While Facebook has self-interested reasons to avoid that job, we also should consider how much we want the company to police its users’ content. The mediascape of the 20th century had more consistent objectivity (though that ideal is more problematic than it’s often depicted), but it also had a narrower range of accessible viewpoints. If we truly believe in the freedom of the internet and value the diversity of opinions it allows, we should be careful about giving gatekeepers—especially those with enormous monopolistic powers, like Facebook—too much power to decide what we are allowed to say.

Watch: Simon DeDeo, who studies cosmology and human society, explains how Facebook is changing us.