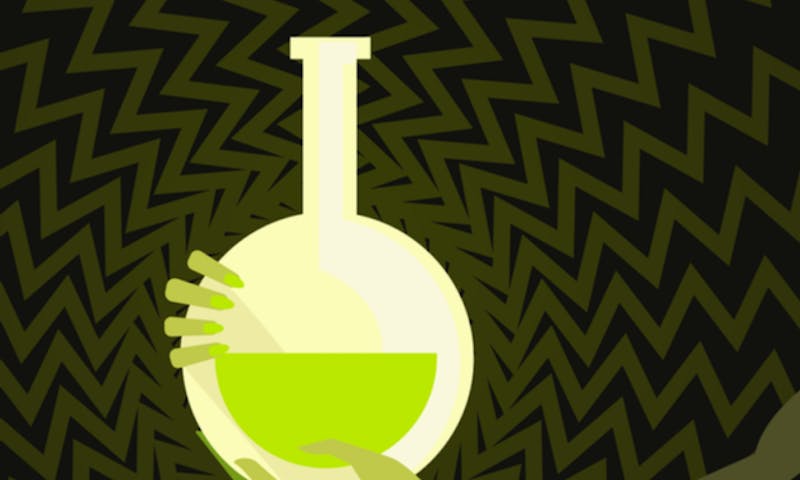 Scientists arguing about whether a science qualifies as Science is more common than you might think. Zoom in, and you’ll see scientists arguing about who does (and doesn’t) qualify as a Scientist. Within the last five decades or so, it is generally accepted that more and more women have become Scientists, which implies that if we look back in time, there were fewer and fewer. This ultimately begs the question: Who was the first Woman Scientist?

By then I was myself a mother and still questioning whether I was a Scientist, or if I ever really could be.

Was it Marie Curie? She discovered the element radium, and later polonium, near the end of the 19th century. Does she count? After all, she viewed herself as more of an Artist: “The scientific history of radium is beautiful. And this is proof that scientific work must be done for itself, for the beauty of science,” she wrote in 1921.

Was it Émilie du Châtelet? She formulated the existence of infrared energy. Does she count? She apologized often for not knowing how to say what she wanted to say. “I use everyday words here in contravention with propriety but cannot avoid the too-frequent return of the same word because, technically, there are both things and not-things that we call Fire,” reads a footnote on the very first page of her dissertation, written in 1758.

Was it Hypatia of Alexandria? She developed the mathematical technique of long division, which was cutting-technology during the fifth century A.D. Does she count? Hypatia taught men of great influence and highest government, and was eventually stripped, stoned, torn to pieces, and burnt to ashes for her trouble. Suidas, the 10th-century author of the first encyclopedia, devoted most of Hypatia’s entry to the debate over whether she died a virgin.

Was it the Neanderthal female whose name has been lost to time? Who collected herbs and berries and could distinguish East from West, ripe from rotten, medicine from poison? Does she count? She didn’t publish her results but we do have her bones, and we use them to argue over her “cognitive capacities” in the pages of Nature.

Scientists arguing about whether a science qualifies as Science is more common than you might think.

I’ve been told, more times than I can count, that these women shouldn’t count. That Marie Curie was mostly following her husband’s lead. That Émilie du Châtelet was a party-girl who slept with Voltaire and had a knack for translation. That Hypatia’s father Theon (or her brother Epiphanius, or the bishop of Ptolemais, or …) was the original author of her work. That I am prone to anthropomorphizing trees and seeds and Neanderthals. That my personal agenda makes me see Science everywhere, even in the places where it’s not.

But certain questions still nag me. Now that I’ve learned and practiced both, why doesn’t cooking count as chemistry? Why doesn’t sewing count as geometry? Is gardening so different from botany? Does budgeting not involve math? Were my four grandmothers scientists, the ones who produced enough from too little, refining their techniques as they went along, working and working, in between babies, in between wars, in between being born and being dead?

Why doesn’t their laborious trial and error, across generations, involving known and unknown materials, practices, procedures count as the scientific method? Because it produced only food, clothing, shelter, babies and love, and not publications?

What if the first woman scientist was simply the first woman? Was it Eve herself? Was she an horticultural ophiologist? An experimental theologist? Does she count? No, she was just a stolen rib, a spare part. She was born to be a helpmeet, to supply what the beasts of the field and the fowls of the air could not, in sorrow and pain. She was to be ruled over. She was to be cleaved to. And in the end, she was excluded.

This last year the earth itself seemed to stop in its tracks as COVID-19 suspended our collective animation. We waited for it to run its course, then for a cure, then for a vaccine. We are still waiting for some kind of ending and for some kind of beginning of what we hope will resemble the past. Quietly and in the background, our planet has circled the sun more-or-less the same way it has done for the last billion years, and we now find ourselves facing our second Earth Day distanced from each other and from the things we used to do.

Some things will be the same: We will tell each other the story of Gaia, the woman who is much more than a Woman. She is the docile Earth-mother who generously balances and protects the environment and all its inhabitants. She is our New-Age Eve—one who never screwed up—a goddess that can be worshipped by atheists. Above all, she is a nursery-rhyme for grown-ups, charming us away from the empty space where our own efforts should be.

In my 41st year I read Hesiod’s original eighth-century B.C. story of Gaia. By then I was myself a mother and a stranger in a strange land, and still questioning whether I was a Scientist, or if I ever really could be. Through my reading, I discovered the real Gaia, and will never believe in the fairy tale again.

The real Gaia emerged spontaneously out of the chaos. First in the universe—she was the universe—until her brothers Tartarus and Eros followed her. Later, while her other younger siblings were squabbling about who was to be Day and who was to be Night, Gaia began her work, and her work was creating.

Gaia was a hard worker and she created almost everything. She eventually gave birth to 20 children—all of them destined to become gods—but during her early career, she labored alone. She brought forth the Sky and the Sea all by herself, in an attempt to build an ever-sure abiding-place for her future family. She was careful to fashion Uranus as her equal, and then took him as her mate.

After a little coaching by Eros, and a lot of work by Gaia, Uranus found himself the father of duodecaplets: six daughters and six sons. At this point in the story, Uranus completely lost his mind.

Not at all ready for fatherhood, Uranus shoved all 12 children back inside Gaia, and then rejoiced at her groaning. Gaia responded by inventing the atom, then the elements, and then from them she invented rock and quartz and flint. She then set about to forge a terrible sharp weapon.

Upon its completion, she showed the weapon to her sons and asked which one of them would use it to punish their father? Her youngest and most loyal son, Cronos, volunteered. When Uranus next came close, Cronos reached out and viciously maimed Uranus, and blood gushed across the earth.

This has led me to a deeper truth: that Gaia was a Scientist, I am a Scientist, that your mother and grandmother might be Scientists too.

Out of nostalgia, or perhaps just frugality, Gaia collected the blood and created from it a great number of Nymphs, and then taught them to differentiate oak trees from ash. Gaia’s love for Uranus was over, though they had 12 children in common plus any number of step-monsters and giants. She would, nonetheless, live to know the sorrow of watching her favorite son grow into a violent bully like his father.

Her heart having been broken by Uranus, Gaia turned to her second creation, Pontus, and started over. With him she had five children: three great, proud boys and then two little girls—one sweet and one sour. Their oldest, Nereus, was a Golden Boy, kind and gentle, lawful and honest. A sea nymph rewarded him for his goodness by giving him 50 daughters, each of whom grew into a skilled craftswoman, not unlike her grandmother.

Gaia then turned her attention to her daughter Rhea, who needed her help badly, in the form of protection from Gaia’s son, Cronos. Rhea had already given birth five times, and each time, Gaia attended her daughter as midwife. After each of these babies had dropped from Rhea’s womb and onto Gaia’s knees, Cronos grabbed them and swallowed them. One after the other, he had destroyed his children, unable to endure the idea of them growing into beings that might not obey him.

Gaia fled with the desperate Rhea, to a far-away land, where she birthed her grandson, Zeus. With mother and baby safely hidden in the woods, Gaia returned to Cronos carrying a stone swaddled in a blanket, which he immediately thrust down into his belly. As the years rolled on, Cronos repented his actions, but it was too late. Gaia had raised Zeus, nourishing him on the idea that it was his destiny to vanquish his father—a feat he ultimately accomplished using firearms borrowed from his uncles.

After all her children had grown up and left home, Gaia found lasting comfort with Tartarus. The oldest of her friends, he had emerged from Chaos just after her, and so had watched her working these many eons, out of the depths of his own exile. Gaia and Tartarus had one son, Typhoeus—a nervous, troubled boy who could not stop his feet from moving and heard voices in his head. He was subject to fits of wild and confused fury, from which only his father could talk him down.

Having pursued her career to its fullest, Gaia sank contentedly into retirement. She blessed her own work and then set aside all toil. She handed the keys of Olympus to her favorite grandchild Zeus, and wished him the best of luck. And that is where Gaia’s real story ends.

I know that the above story isn’t true. Similar to how I don’t believe there was a perfect garden or breathing dust or magic tree or talking snake or poison apple. No, I don’t believe in one-eyed giants or three-headed dogs or winged witches or flying horses. But I do believe in second chances at love, and tragedy during childbirth, and mothers that protect and fathers that abuse, and sons that grow to hate their mothers, and good men who know the value of daughters, and failure that comes too early and success that comes too late and to somebody else. I believe in knowing the difference between an oak tree and an ash tree. But most of all, I believe in women who work and follow no one.

Hesiod’s untrue story has led me to a deeper truth: that Gaia was a Scientist, that I am a Scientist, that your mother and grandmother might be Scientists too. That we have always been and that we may all dare to count. That maybe it’s not selfish cupidity that limits the application of the title. Maybe, like Ptolemy’s Earth-centric model of the universe, they set it up wrong from the start. Maybe the only real way to identify a Scientist is when we see the joy and frustration and late nights and failed attempts and glowing pride unspoken whenever we are offered a view of something private and beautiful.

Hope Jahren currently serves as the Wilson Professor at the University of Oslo. She has recently finished rewriting her latest book, The Story Of More, for a junior high/high school audience. Watch for its release in late 2021.