Gaia Will Soon Belong to the Cyborgs

The father of the Gaia principle on the coming age of hyperintelligence. 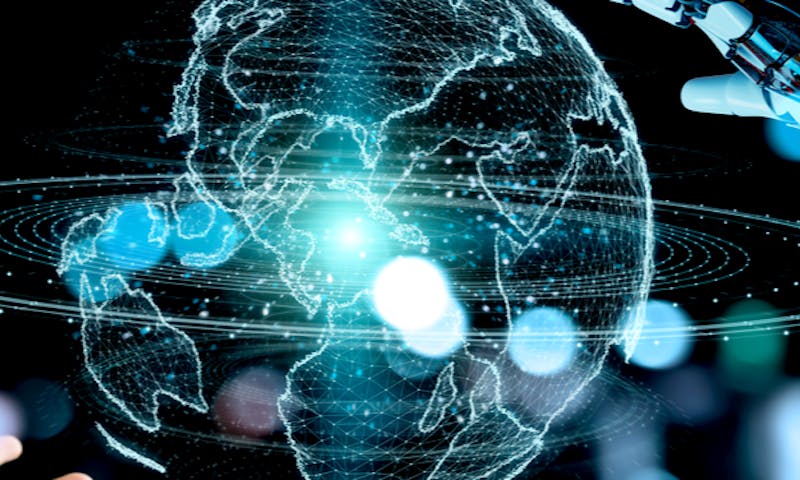 Our reign as sole understanders of the cosmos is rapidly coming to an end. We should not be afraid of this. The revolution that has just begun may be understood as a continuation of the process whereby the Earth nurtures the understanders, the beings that will lead the cosmos to self-knowledge. What is revolutionary about this moment is that the understanders of the future will not be humans but cyborgs that will have designed and built themselves from the artificial intelligence systems we have already constructed. These will soon become thousands then millions of times more intelligent than us.

The term cyborg was coined by Manfred Clynes and Nathan Kline in 1960. It refers to a cybernetic organism: an organism as self-sufficient as one of us but made of engineered materials. I like this word and definition because it could apply to anything ranging in size from a microorganism to a pachyderm, from a microchip to an omnibus. It is now commonly taken to mean an entity that is part flesh, part machine. I use it here to emphasize that the new intelligent beings will have arisen, like us, from Darwinian evolution. They will not, at first, be separate from us; indeed, they will be our offspring because the systems we made turned out to be their precursors.

Cyborgs may be the start of a process that leads toward an intelligent universe.

We need not be afraid because, initially at least, these inorganic beings will need us and the whole organic world to continue to regulate the climate, keeping Earth cool to fend off the heat of the sun and safeguard us from the worst effects of future catastrophes. We shall not descend into the kind of war between humans and machines that is so often described in science fiction because we need each other. Gaia will keep the peace.

This is the age I call the “Novacene.” I’m sure that one day a more appropriate name will be chosen, something more imaginative, but for now I’m using Novacene to describe what could be one of the most crucial periods in the history of our planet and perhaps even of the cosmos.

We shall be parents of the cyborgs and we are already in the process of giving birth. It is important we keep this in mind. Cyborgs are a product of the same evolutionary processes that created us.

Electronic life depends on its organic ancestry. I can see no way for non-organic life forms to evolve, de novo, on another Earth or any other planet from the mix of chemicals and in the physical conditions common in the universe. For cyborg life to emerge requires the services of a midwife. And Gaia fits the role.

It seems probable that organic life must always precede electronic life. Indeed, had it been easy for the components of electronic life to assemble on a planet, the rate at which such a life form evolves would by now have filled the universe with life. The fact that the observable universe so far appears barren strongly suggests that electronic life cannot form automatically from solar debris.

Cyborgs will soon become thousands of times more intelligent than us.

Parents we may be, but equals we cannot be. This raises a huge problem that cannot be solved by technical or scientific expertise. How do we plan our diplomacy in the last years of the Anthropocene, so that flesh-and-blood humans, together with the wet chemical life of Gaia, can enjoy a peaceful retirement during the first stage of the transition from organic to inorganic life?

Negotiations between the two species are almost impossible to imagine. They would be likely to see us as we see plants—as beings locked in an extraordinarily slow process of perception and action. Indeed, when the Novacene is established, cyborg scientists may well exhibit collections of live humans. After all, people who live near London go to Kew Gardens to watch the plants.

I sense that the cyborg world is as difficult for one of us to comprehend as the complexities of our world are to a dog. Once the cyborgs have become established, we will no more be the masters of our creations than our much-loved pet is in charge of us. Perhaps our best option is to think this way, if we want to persist in a newly formed cyber world.

A child is not born with an immediate ability to understand its environment. It takes many months before it senses the world and years before it can change it. It may be a false memory, but I recall vividly a dream of lying in the sunshine in the garden and experiencing a sense of great comfort and somehow recognizing that this was life. If it was an authentic experience it must have taken place in my second year of life. For a new-built cyborg, this coming alive would take about an hour.

Such acceleration also applies to speed of response. Early organic life that existed as separate individual cells could respond to an environmental change, such as light intensity, acidity, the presence of food, in about one second. By contrast, cyborgs could probably detect a change in light level occurring in a femtosecond (one quadrillionth of a second), a million million times faster than organic life.

Yet, in spite of the limitations of its chemical and physical nature, organic life achieves sensitivities to change near the very limits of possibility. At its best, human hearing can detect a sound with an amplitude equal to a tenth of the diameter of a proton. Human sight is so sensitive that if it were only slightly more sensitive we would see a set of flashes in the night sky as individual quanta of light illuminating our retinas. Impressive though these adaptations are, organic life will never be able to match the speed and sensitivity of cyborgs.

Memory is another matter. Both organic and electronic memories are impressively great and here the race is still on, as it is with longevity. After nearly 100 years of life I can still remember the details of my grandmother’s garden and even persuade myself to imagine that the detail is photographic. Now imagine the response of a young cyborg to the human shout of victory at a sports event. Does it react emotionally, just as humans do? I wonder if it will be for them as it is with us—so that the sense of time varies with the occasion.

The arrival of the cyborgs and the Novacene will be further evidence of the two great issues—are we alone in the cosmos and is the entire cosmos destined to attain consciousness? On the subject of aliens, I think the Novacene will add weight to my conviction that they don’t exist.

In 1950 at the Los Alamos National Laboratory, the physicist Enrico Fermi was on his way to lunch with three colleagues. They were discussing the epidemic of UFO sightings that had afflicted the United States—the famous Roswell incident involving a UFO crash had happened three years before, and by 1950 aliens seemed to be everywhere. None of these reports was remotely convincing to Fermi and during lunch he suddenly blurted out, “Where are they?”

This chance remark has undermined alien spotters ever since. Fermi’s point was that, if we are here, they should also be here, but they aren’t. There are billions of stars in our galaxy and sextillions in the observable cosmos. We now know there are also many planets which could be inhabited by aliens with much higher technological capabilities than humans. If they, like us, pursued space flight, then the immense age of the cosmos would mean they could have at least traversed our galaxy. In short, aliens should be swarming about the place—but they aren’t.

Cyborgs are a product of the same evolutionary processes that created us.

Once again we must remember the time involved in producing understanding creatures. When thinking of the evolution of intelligence it is important to keep in mind how slow a process it is. The cosmos itself is 13.8 billion years old. After it started, a few billion years must have been spent on cosmic evolution. How long did the period of monstrously large hydrogen-only stars last? A star 1,000 times more massive than our sun has a lifetime of about 1 million years. These would be too big and too short-lived to allow life to emerge in their vicinity. Then eventually, somehow, our sun appeared, probably in a globular cluster. It must have lived close to violent neighbors which exploded as supernovae that littered the cluster with the elements of life. Then, after all this, there still remained 4 billion years until we emerged.

So not only are we alone in the universe, our cyborg successors will also be alone. They, too, will find themselves the sole understanders in an otherwise lifeless cosmos. They will, of course, be far better equipped for the task of understanding. Perhaps, if the cosmic anthropological principle is correct, they will be the start of a process that leads toward an intelligent universe. By setting free the cyborgs, there may be a small chance that they will evolve able to complete the purpose of the universe, whatever that may be. Perhaps the final objective of intelligent life is the transformation of the cosmos into information.

Must we fear the future and the surprises the Novacene might bring? I do not think so. This epoch will mark the end of what is to us nearly 4 billion years of biological life on this planet. As humans with emotions, surely it is something of which we should be proud as well as sad. If John Barrow and Frank Tipler (The Anthropic Cosmological Principle) are right and the universe exists to produce and sustain intelligent life, then we are playing a part like that of the photosynthesizers, organisms that set the scene for the next stage of evolution.

The future is, for us, unknowable, as it always has been, even in an organic world. Cyborgs will conceive cyborgs. Far from continuing as low-life which is there for our convenience, they will evolve and could be the advanced evolutionary products of a new and powerful species. But for the dominating and overwhelming presence of Gaia, they would in no time be our masters.

James Lovelock is the originator of the Gaia hypothesis (now Gaia theory). His many books on the subject include Gaia: A New Look at Life on Earth, The Revenge of Gaia, The Vanishing Face of Gaia, and A Rough Ride to the Future. The author of more than 200 scientific papers, he was elected a Fellow of the Royal Society in 1974.

This article was adapted from Novacene: The Coming Age of HyperIntelligence, by James Lovelock, with Bryan Appleyard, published in 2019 by MIT Press.