For decades, astronomers debated whether a particular smudge was close-by and small, or distant and huge. A new X-ray map supports the massive option. 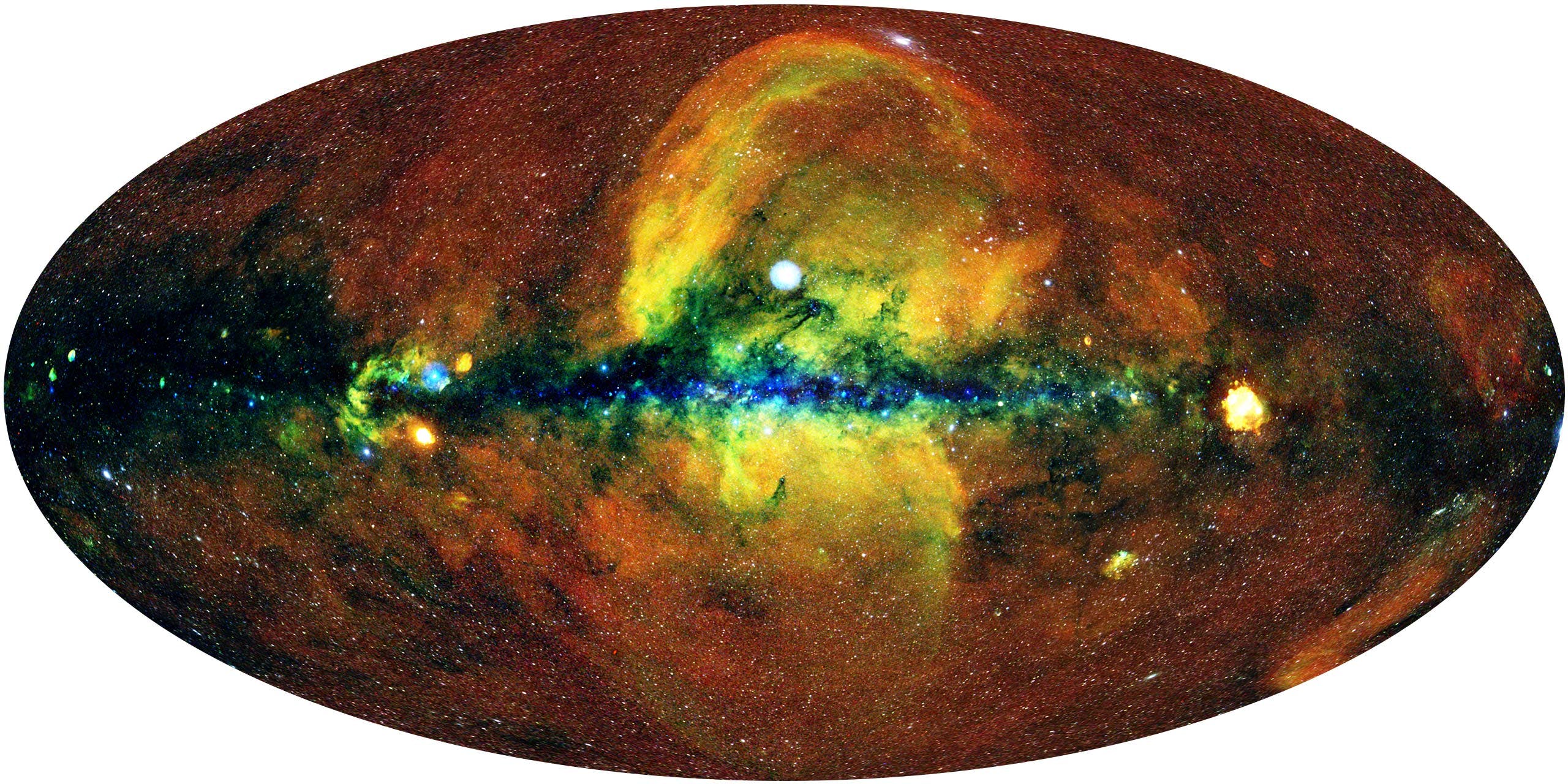 When Peter Predehl, an astrophysicist at the Max Planck Institute for Extraterrestrial Physics in Germany, first laid eyes on the new map of the universe’s hottest objects, he immediately recognized the aftermath of a galactic catastrophe. A bright yellow cloud billowed tens of thousands of light-years upward from the Milky Way’s flat disk, with a fainter twin reflected below.

The structure was so obvious that it barely seemed necessary to describe it in writing. But “Nature wouldn’t accept [us] simply sending a picture and saying, ‘OK, we can see this,’” Predehl said. “Therefore, we did some analysis.”

The results, which Nature published on December 9, 2020 have moved a decades-old idea from the fringe into the mainstream.

In the 1950s, astronomers first spotted a radio wave-emitting arc hanging above—or to the “north” of—the galactic plane. In the decades since, the “North Polar Spur” has become something of a celestial Rorschach test. Some see the scattered innards of an ex-star that’s relatively close by. Others see evidence of a grander explosion.

The controversy hinges on every astronomer’s major headache: Peering out into space, researchers have no depth perception. “We see a 2D map of a 3D universe,” said Kaustav Das, a researcher at the California Institute of Technology.

For decades, most astronomers believed that the North Polar Spur was part of the local galactic neighborhood. Some studies concluded that it connects to nearby gas clouds. Others looked at its distortion of background stars and inferred that it’s a supernova remnant—a dusty cloud marking the gravestone of a dead star.

Yet Yoshiaki Sofue, an astronomer at the University of Tokyo, has always thought the spur looked funky for a stellar debris cloud. Instead, he imagined the arc to be one stretch of a huge unseen structure—a pair of bubbles straddling the galaxy’s heart. He published simulations in 1977 that produced digital clouds lining up with the spur, and ever since then he has told anyone who would listen that the spur actually hovers tens of thousands of light-years above the disk. He described it as an expanding shock wave from a galactic calamity dating back millions of years.

But if Sofue was right, there should also be a twin structure to the south of the galactic plane. Astronomers saw no trace of this counterpart, and most remained unconvinced.

Then in 2010, the Fermi space telescope caught the faint gamma-ray glow of two humungous lobes, each extending roughly 20,000 light-years from the galaxy’s center. They were too small to trace the North Polar Spur, but they otherwise looked just like the galactic-scale clouds of hot gas Sofue predicted. Astronomers began to wonder: If the galaxy had at least one pair of bubbles, perhaps the spur was part of a second set?

“The situation dramatically changed after the discovery of the Fermi bubbles,” said Jun Kataoka, an astronomer at Waseda University in Japan who has collaborated with Sofue.

The new images have further cemented the change of opinion. They came from eROSITA, an orbiting X-ray telescope that launched in 2019 to track dark energy’s effect on galaxy clusters. The eROSITA team released a preliminary map in June of 2020, the fruit of the telescope’s first six months of observations.

The map traces X-ray bubbles that stand an estimated 45,000 light-years tall, engulfing the gamma-ray Fermi bubbles. Their X-rays shine from gas that measures 3 million to 4 million degrees Kelvin as it expands outward at 300 to 400 kilometers per second. And not only does the northern bubble align perfectly with the spur, its mirror image is obvious as well, just as Sofue predicted. “I was particularly happy to see the southern bubble clearly exhibited, so similar to my simulation,” he said.

Still, a full interpretation of all North Polar Spur observations remains complex; a nearby supernova remnant could have parked itself right in front of the X-ray bubbles by chance, for instance, giving both interpretations elements of truth. In September of 2020, Das and collaborators used state-of-the-art observations of distant stars to show that something dusty is hanging out about 450 light-years away—a stone’s throw, by galactic standards.

But the meaning of eROSITA’s mushroom clouds is clear: Something went bang in the center of the Milky Way around 15 million to 20 million years ago, around the same time hyenas and weasels were emerging on Earth.

What exploded? Based on the energy required to make the clouds so big and so hot, there are two plausible sources.

One possibility is that a wave of tens of thousands of stars popped into being and promptly blew up, behavior familiar from so-called starburst galaxies. But the bubbles appear rather pure, lacking the heavy atomic shrapnel that a cohort of exploding stars should have peppered them with. “The metal abundance is very small, so I don’t believe that the starburst activity happened,” Kataoka said.

The alternative culprit is the supermassive black hole that sits at the galaxy’s heart. The 4-million-solar-mass leviathan is relatively quiet today. But if a large cloud of gas once strayed too close, the black hole could have switched on like a spotlight. While feasting on the hapless passerby, the black hole would have gobbled down half the cloud while energy from the other half sprayed out above and below the disk, inflating the X-ray bubbles and perhaps the Fermi bubbles too (although the two pairs could also represent separate episodes of activity, Predehl noted).

Astronomers have long observed other galaxies that shoot out jets above and below their disks, and they’ve wondered what makes the central supermassive black holes in those galaxies churn so much more violently than ours does. The Fermi bubbles, and now the eROSITA bubbles, suggest that the main difference may simply be the passage of time.

Lead image: In this X-ray view of the entire sky, giant bubbles are clearly visible extending above and below the plane of the Milky Way galaxy. The bubbles likely come from the supermassive black hole at the galaxy’s center. Credit: Jeremy Sanders, Hermann Brunner and the eSASS team (MPE); Eugene Churazov, Marat Gilfanov (on behalf of IKI)