The glial cells of the nervous system have been eclipsed in importance by neurons for decades. But glia are turning out to be central to many neurological functions, including pain perception. 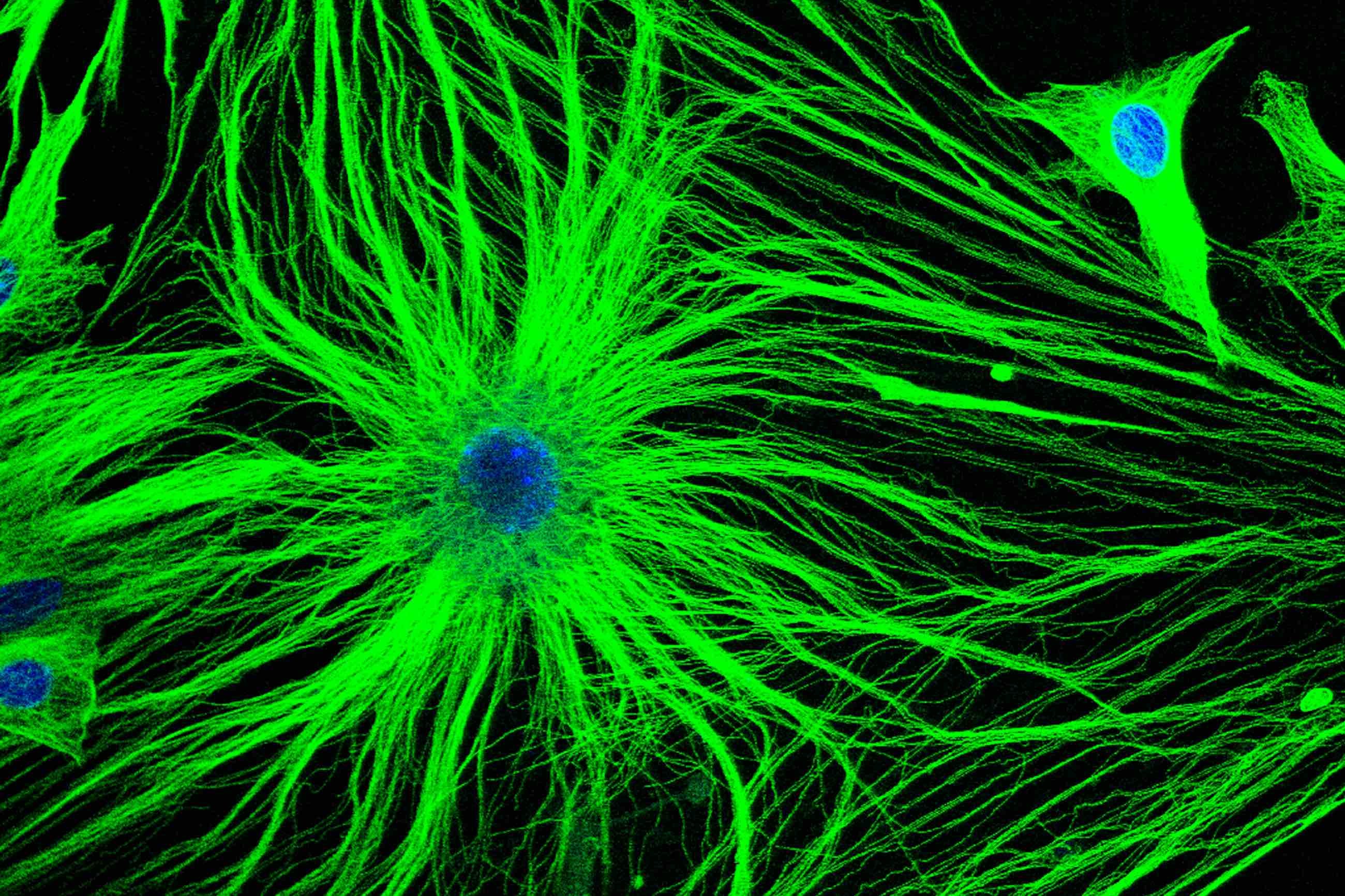 The sting of a paper cut or the throb of a dog bite is perceived through the skin, where cells react to mechanical forces and send an electrical message to the brain. These signals were believed to originate in the naked endings of neurons that extend into the skin. But in 2019, scientists came to the surprising realization that some of the cells essential for sensing this type of pain aren’t neurons at all. It’s a previously overlooked type of specialized glial cell that intertwines with nerve endings to form a mesh in the outer layers of the skin. The information the glial cells send to neurons is what initiates the “ouch”: When researchers stimulated only the glial cells, mice pulled back their paws or guarded them while licking or shaking—responses specific to pain.

This discovery is only one of many findings showing that glia, the motley collection of cells in the nervous system that aren’t neurons, are far more important than researchers expected. Glia were long presumed to be housekeepers that only nourished, protected and swept up after the neurons, whose more obvious role of channeling electric signals through the brain and body kept them in the spotlight for centuries. But over the last couple of decades, research into glia has increased dramatically.

“In the human brain, glial cells are as abundant as neurons are. Yet we know orders of magnitude less about what they do than we know about the neurons,” said Shai Shaham, a professor of cell biology at the Rockefeller University who focuses on glia. As more scientists turn their attention to glia, findings have been piling up to reveal a family of diverse cells that are unexpectedly crucial to vital processes.

It turns out that glia perform a staggering number of functions. They help process memories. Some serve as immune system agents and ward off infection, while some communicate with neurons. Others are essential to brain development. Far from being mere valets to neurons, glia often take leading roles in protecting the brain’s health and directing its development. “Pick any question in the nervous system, and glial cells will be involved,” Shaham said.

Glia take many forms to perform their specialized functions: Some are sheathlike, while others are spindly, bushy or star-shaped. Many tangle around neurons and form a network so dense that individual cells are hard to distinguish. To some early observers, they didn’t even look like cells—they were considered a supportive matrix within the skull. This prompted the 19th-century researcher Rudolph Virchow to dub this non-neuronal material “neuroglia,” drawing on the Greek word for glue.

One reason glia were given such short shrift was that when researchers first began staining nervous system tissue, their methods revealed the convoluted shapes of neurons but rendered only select glia visible. Santiago Ramón y Cajal, who is credited with the discovery of neurons and widely regarded as the founder of neuroscience, illustrated one subtype of glia but lumped the rest together as “the third element.” His focus on neurons set the stage for the burgeoning field of neuroscience but shoved the glia behind the curtains.

In addition, some glia are challenging to study because their fates are so entwined with those of neurons that it’s hard to learn about them separately. If researchers try to learn about the glia’s functions by knocking them out and observing the effects, the neurons they support will die along with them.

But the revolution in cell biology techniques in recent decades has generated an arsenal of tools offering greater access to glia, Shaham said. Advances in live imaging, fluorescent labeling and genetic manipulation are revealing the breadth of glia’s forms and functions.

Several cell types are contained within the umbrella category of glia, with varied functions that are still coming to light. Oligodendrocytes and Schwann cells wrap around nerve fibers and insulate them in fatty myelin sheaths, which help to confine the electrical signals moving through neurons and speed their passage. Astrocytes, with their complex branching shapes, direct the flow of fluid in the brain, reshape the synaptic connections between neurons, and recycle the released neurotransmitter molecules that enable neurons to communicate, among other jobs.

But the cells that have been the subjects of an especially strong spike in interest over the last decade or so are the ones called microglia.

Microglia were originally defined in four papers published in 1919 by Pío del Río-Hortega, but the study of them then stalled for decades, until finally picking up in the 1980s. Microglia research is now growing exponentially, said Amanda Sierra, a group leader at the Achucarro Basque Center for Neuroscience. The work is exposing how microglia respond to brain trauma and other injuries, how they suppress inflammation, and how they behave in the presence of neurodegenerative diseases. The cells “really are at the edge between immunology and neuroscience,” Sierra said.

Guy Brown, a professor of biochemistry at the University of Cambridge, was first drawn to microglia by their star shapes and dynamic movements, but it was their behavior that held his attention. In recent years, microglia have been found to mimic the macrophages of the immune system by engulfing threats to the brain such as cellular debris and microbes. Microglia also seem to go after obsolete synapses. “If you live-image them, you can see them eating neurons,” Brown said.

Some of these active functions are shared with other types of glia as well. Astrocytes and Schwann cells, for example, may also prune synaptic connections. But despite the commonalities among different subsets of glia, researchers are starting to realize that there’s little to unify glial cells as a group. In fact, in a 2017 article, scientists argued for discarding the general term “glia” altogether. “They don’t have an enormous amount in common, different glial cells,” Brown said. “I don’t think there’s much future to glia as a label.”

Ben Barres, a neuroscientist who championed glia research and passed away in 2017, considered deeper investigations of glia essential to the advance of neurobiology as a field. Others have taken up that cause as well. To them, the historical emphasis on neurons made sense at one time: “They are the ones who process the information from the outside world into our memories, our thinking, our processing,” Sierra said. “They are us.” But now the importance of glia is clear.

Neurons and glia cannot function independently: Their interactions are vital to the survival of the nervous system and the memories, thoughts and emotions it generates. But the nature of their partnership is still mysterious, notes Staci Bilbo, a professor of psychology and neuroscience at Duke University. Glia are gaining a reputation for the complexity long attributed to neurons, but it’s still unclear whether one cell type primarily directs the other. “The big unknown in the field is: Who is driving the response?” she said.

Lead image: Star-shaped astrocytes are the most abundant glial cells in the brain. Their sole function was thought to be to support the survival of neurons, but like other glial cells, they are turning out to serve much more varied purposes. Credit: David Robertson, LCR / Science Photo Library