Recent measurements of particles called B mesons deviate from predictions. Alone, each oddity looks like a fluke, but their collective drift is more suggestive. 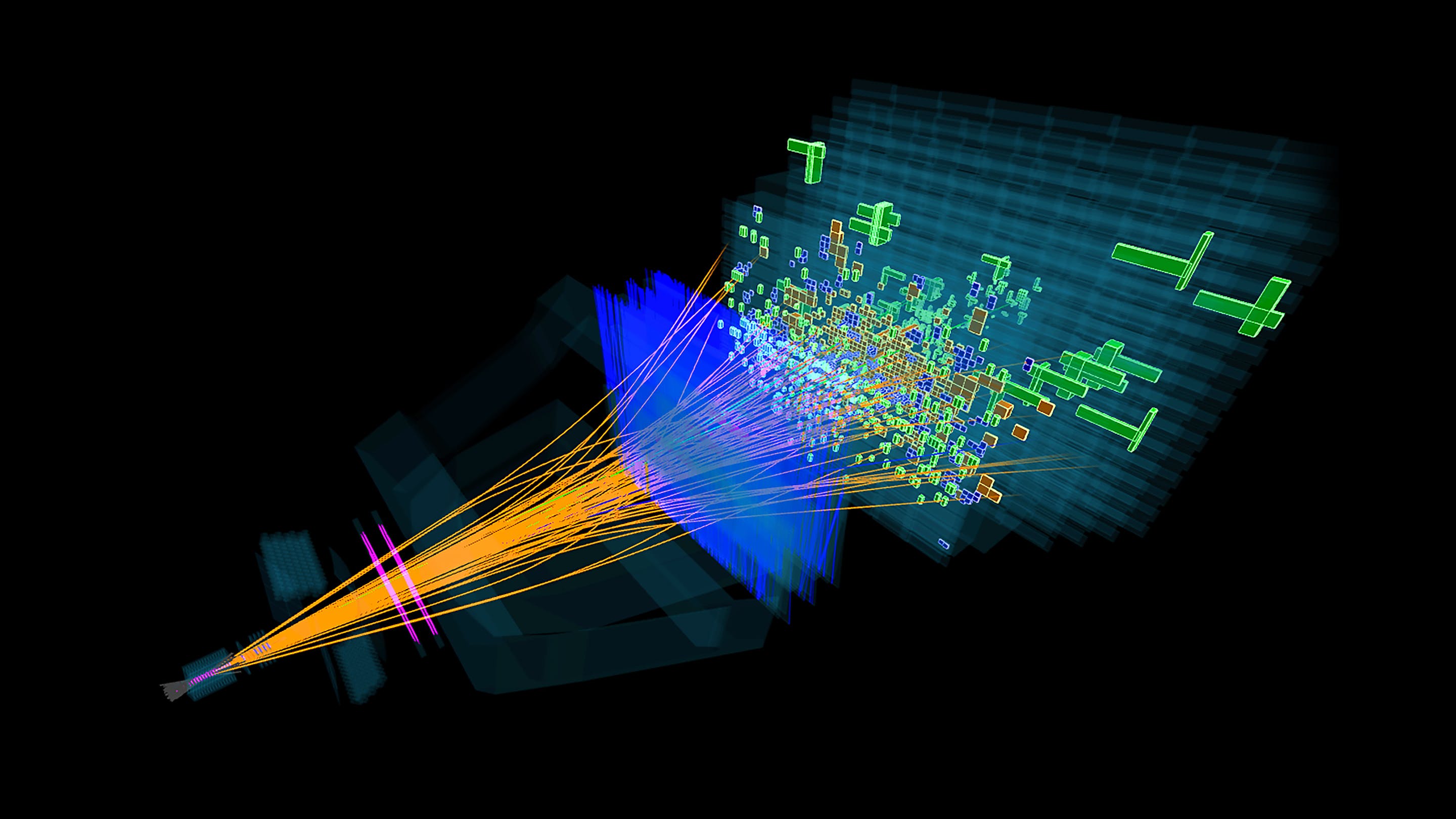 Amid the chaotic chains of events that ensue when protons smash together at the Large Hadron Collider in Europe, one particle has popped up that appears to go to pieces in a peculiar way.

All eyes are on the B meson, a yoked pair of quark particles. Having caught whiffs of unexpected B meson behavior before, researchers with the Large Hadron Collider beauty experiment (LHCb) have spent years documenting rare collision events featuring the particles, in hopes of conclusively proving that some novel fundamental particle or effect is meddling with them.

In their latest analysis, first presented at a seminar in March 2020, the LHCb physicists found that several measurements involving the decay of B mesons conflict slightly with the predictions of the Standard Model of particle physics—the reigning set of equations describing the subatomic world. Taken alone, each oddity looks like a statistical fluctuation, and they may all evaporate with additional data, as has happened before. But their collective drift suggests that the aberrations may be breadcrumbs leading beyond the Standard Model to a more complete theory.

“For the first time in certainly my working life, there are a confluence of different decays that are showing anomalies that match up,” said Mitesh Patel, a particle physicist at Imperial College London who is part of LHCb.

The B meson is so named because it contains a bottom quark, one of six fundamental quark particles that account for most of the universe’s visible matter. For unknown reasons, the quarks break down into three generations: heavy, medium and light, each with quarks of opposite electric charge. Heavier quarks decay into their lighter variations, almost always switching their charge, too. For instance, when the negatively charged heavy bottom quark in a B meson drops a generation, it usually becomes a middleweight, positively charged “charm” quark.

The LHCb collaboration scours the wreckage of particle pileups for exceptions to this rule. For every million B meson decays they see, one fringe event showcases a rebellious bottom quark metamorphosing into a “strange” quark instead, dropping a generation but keeping its negative charge. The Standard Model predicts the exceedingly low rate of these events and how they will play out. But because they are so rare, any tweaks coming from undiscovered particles or effects should be obvious.

LHCb’s new analysis covered about 4,500 rare B meson decays, roughly doubling the data from their previous study in 2015. Each transformation ends with four outbound particles hitting a ring-shaped detector. When experimentalists compared the various angles between the particles with the angles predicted by the Standard Model, they found a deviation from the expected pattern. The collective significance of the anomalous angles grew slightly since the last analysis, and researchers say the study’s measurements also tell a more unified story. “Suddenly the consistency between the different angular observables got much better,” said Felix Kress, an LHCb researcher who helped crunch the numbers.

Statistically, the deviation in the angular pattern is equivalent to flipping a coin 100 times and getting 66 heads, rather than the usual 50 or so. For a fair coin, the odds of such a deviation are about 1 in 1,000.

But amid oodles of particle collisions, statistical fluctuations are bound to arise, so a 1-in-1,000 deviation doesn’t count as hard proof of a break with the Standard Model. For that, the physicists will need to accumulate enough B meson decays to demonstrate a deviation of 1 in 1.7 million, akin to flipping 75 heads. “If this is new physics,” Jure Zupan, a theoretical physicist at the University of Cincinnati, said of the current update, “it’s not significant enough.”

Still, the observed pattern hints that something is off with B meson decay products in the lepton family, the other category of matter particles aside from quarks. Like quarks, leptons come in heavy, medium and light generations (called tau particles, muons and electrons, respectively); the Standard Model says they’re all identical except for their mass. Each B meson decay ends by shooting off a twin pair of any of the three types of leptons. LHCb’s latest update focused on the anomalous angular pattern produced by muon events, which are easiest to detect.

The experiment also logs a smaller number of B meson decays ending with electrons. The Standard Model demands that both types of decays should play out in exactly the same way, but a 2014 analysis by the LHCb team uncovered a possible difference between the muon events and the electron events. Taken together, the anomalies could mean that the novelty may lie not only with muons, but with electrons as well.

Patel’s group is currently working on an update to the electron-versus-muon measurement, which he said makes for a much “cleaner,” unambiguous observation than the muon angle measurements alone. “This is a Standard Model killer,” he said.

If the B meson anomalies are real, physicists have two leading theories to explain them.

A new, hypothetical force-carrying particle called the Zʹ boson would resemble the standard weak force that turns one matter particle into another, except that it would influence electrons and muons differently. As a bonus, the Zʹ boson would also imply the existence of an additional massive particle that could make up the universe’s missing dark matter. “We are moving to the next step, which is trying not just to explain the anomaly, but to connect the anomaly to other problems,” said Joaquim Matias, a theoretical physicist at the Autonomous University of Barcelona.

The more exotic possibility is that LHCb researchers are detecting hints of a fabled particle—the leptoquark—that can turn a quark into a lepton and vice versa. Theorists have long contemplated the possibility of leptoquarks, but the idea has grown less popular as experiments have ruled out the simplest kinds. Still, the three-generation quark family tree looks suspiciously like the lepton family tree, and neither pattern is well understood.  Decaying B mesons may be revealing a leptoquark link between them. “That’s the dream,” said Zupan.

As theorists consider these possibilities, the LHCb team will have to see if they can flip enough heads to prove that their coin is definitely not standard—an endeavor that may take the rest of the decade.

Ultimately, however, the particle physics community will hold out for confirmation from a different apparatus, such as the Belle II experiment in Japan, or one of the LHC’s two main detectors. Either proving or eliminating the B meson anomalies will be a herculean endeavor, but researchers have all the tools they need. “With four experiments that can chip in,” Zupan said, “the future is bright.”

Lead image: Computer reconstruction of a collision event in the Large Hadron Collider beauty experiment. The collision produces a B meson, which subsequently decays into other particles that strike LHCb’s detectors. Credit: CERN/LHCb