One black hole is nice, but astrophysicists can do a lot more science with 50 of them. 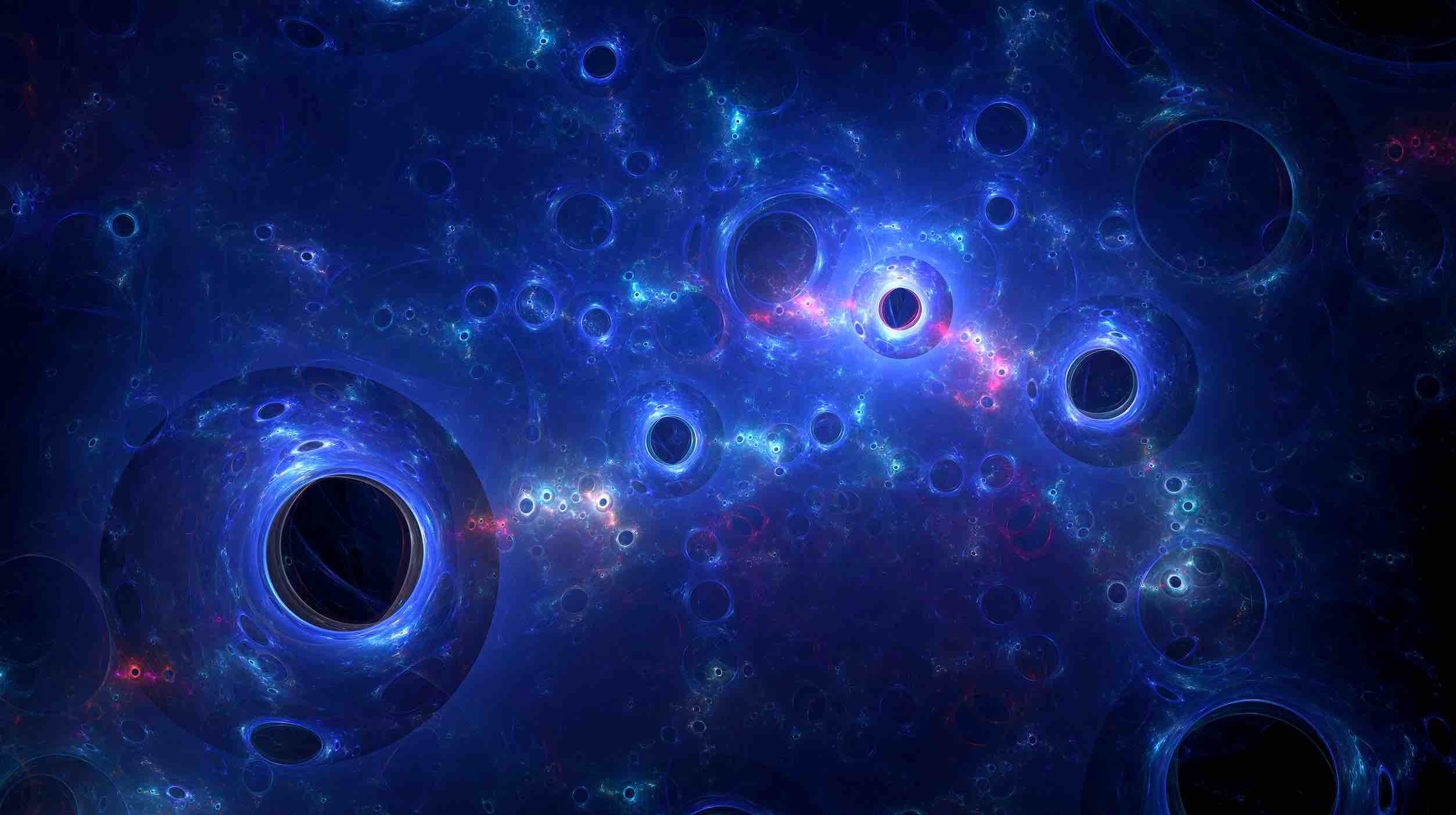 When the first black hole collision was detected in 2015, it was a watershed moment in the history of astronomy. With gravitational waves, astronomers were observing the universe in an entirely new way. But this first event didn’t revolutionize our understanding of black holes—nor could it. This collision would be the first of many, astronomers knew, and only with that bounty would answers come.

“The first discovery was the thrill of our lives,” said Vicky Kalogera, an astrophysicist at Northwestern University and part of the Laser Interferometer Gravitational-Wave Observatory (LIGO) collaboration that made the 2015 detection. “But you cannot do astrophysics with one source.”

Now, gravitational wave physicists like Kalogera say they are entering a new era of black hole astronomy, driven by a rapid increase in the number of black holes they are observing.

The latest catalog of these so-called black hole binary mergers—the result of two black holes spiraling inward toward each other and colliding—has quadrupled the black hole merger data available to study. There are now almost 50 mergers for astrophysicists to scrutinize, with dozens more expected in the next few months and hundreds more in the coming years.

“Black hole astrophysics is being revolutionized by gravitational waves because the numbers are so big. And the numbers are allowing us to ask qualitatively different questions,” said Kalogera. “We’ve opened a treasure trove.”

On the strength of this data, new statistically driven studies are beginning to reveal the secrets of these enigmatic objects: how black holes form, and why they merge. This growing black hole inventory could also offer a novel way to probe cosmological evolution—from the Big Bang through the birth of the first stars and the growth of galaxies.

“I definitely didn’t expect that we’d be looking at these questions so soon after the first detection,” said Maya Fishbach, an astrophysicist at Northwestern. “The field has exploded.”

Where Do Black Holes Come From?

Before black holes can be used to study the cosmos as a whole, astrophysicists must first figure out how they are made. Two theories have dominated the debate so far.

Some astronomers suggest that most black holes originate inside crowded clusters of stars—regions that are sometimes a million times denser than our own galactic backyard. Each time a very massive star explodes, it leaves behind a black hole that sinks to the middle of the star cluster. The center of the cluster becomes thick with black holes, which become entwined by gravity into a fateful cosmic dance. Astronomers call this “dynamical” black hole formation.

Others suggest that black hole binaries start out as pairs of stars in comparatively desolate areas of galaxies. After a long and chaotic life together, they too explode, creating a pair of “isolated” black holes that continue to orbit each other.

“There’s been this perception that it’s a fight between the dynamical and the isolated models,” said Daniel Holz, an astrophysicist at the University of Chicago.

The tendency of many theorists to advocate for just one black hole binary formation channel partly stems from the practicalities of working with very little data. “Each event was lovingly analyzed, obsessed over and fussed over,” said Holz. “We would make a detection and people would try to abstract very broad statements from a sample size of one or two black holes.”

Indeed, astrophysicists used that first detection to argue for opposing conclusions. LIGO found its first black hole merger extremely quickly—before the official start of observation, in fact—which suggested that black hole binary systems are very common in the universe. Since isolated black holes can form in a broad range of astrophysical environments, theories that favor isolated black holes predict that we’ll see a lot of mergers.

Others pointed out that the first merger featured unusually large black holes, and that the existence of these giants supported the dynamical theory. Such large black holes, they reasoned, could only be made in the early universe, when star clusters are also thought to have formed.

Yet with a sample size of one, such assertions could only be an “educated guess,” said Carl Rodriguez, an astrophysicist at Carnegie Mellon University.

Now data from LIGO’s latest catalog shows that black hole binaries are far less common than expected. In fact, the rate of merging black holes now observed could be “entirely explained” by star clusters, according to a paper posted by Rodriguez and his collaborators on the scientific preprint site arxiv.org in January 2021. (The paper’s conclusion is more measured and suggests that both the dynamical and isolated processes are important.)

In addition, the new mergers have enabled a fresh approach to the puzzle of where black holes come from. Despite their elusive nature, black holes are very simple. Aside from mass and charge, the only trait a black hole can have is spin—a measure of how quickly it rotates. If a pair of black holes, and the stars from which they form, live their whole lives together, the constant push and pull will align their spins. But if two black holes happen to encounter each other later in life, their spins will be random.

After measuring the spin of the black holes in the LIGO data set, astronomers now suggest that the dynamic and isolated scenarios are almost equally likely. There is no “one channel to rule them all,” wrote the astrophysicist Michael Zevin and collaborators in a preprint outlining an array of different pathways that together can explain this new and growing population of black hole binaries.

“The simplest answer is not always the correct one,” said Zevin. “It’s a more complicated landscape, and it’s certainly a bigger challenge. But I think it’s a more fun problem to address as well.”

LIGO and its sister observatory Virgo have also grown more sensitive over time, which means they can now see colliding black holes that are much farther away from Earth and much further back in time. “We’re listening to a really big chunk of the universe, out to when the universe was much younger than it is today,” said Fishbach.

In a preprint, Fishbach and her collaborators found indications of differences in the types of black holes observed at different points in cosmic history. In particular, heavier black holes seem to be more common earlier in the universe’s history.

This came as no surprise to many astrophysicists; they expect that the first stars in the universe formed from huge clouds of hydrogen and helium, which would make them much bigger than later stars. Black holes created from these stars should then also be huge.

But it’s one thing to predict what happened in the early universe, and another to observe it. “You can really start to use [black holes] as a tracer of how the universe formed stars over cosmic time and how the galaxies that form those stars and star clusters are assembled. And that starts to get really cool,” said Rodriguez.

The study is a first step toward using large data sets of black holes as a radical tool to explore the cosmos. Astronomers have created an astonishingly accurate model of how the universe evolved, known as Lambda-CDM. But no model is perfect. Gravitational waves offer a way to measure the universe that is completely independent of every other method in the history of cosmology, said Salvatore Vitale, an astrophysicist at the Massachusetts Institute of Technology. “If you get the same results, you’ll sleep better at night. If you don’t, that points to a potential misunderstanding.”

Theorists are now building models that include multiple black hole formation scenarios and unscrambling how each one evolves across the universe’s history. Gravitational wave physicists are hopeful that in the coming months and years they’ll be able to answer these questions with confidence.

“We’re just scratching the surface,” said Kalogera. “The sample is still too small to give us a robust answer, but when we have 100 or 200 of these [mergers], then I think we’ll have clear answers.

Lead image: The dozens of black hole collisions observed by the LIGO and Virgo gravitational wave detectors are changing our view of the universe. Credit: Sakkmesterke/Science Source