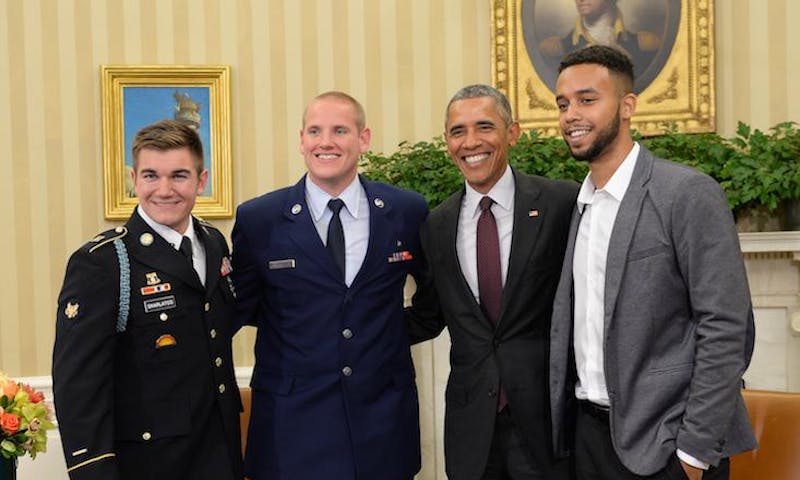 On August 21, 2015, Anthony Sadler, 23, a California college student, was riding a train from Amsterdam to Paris with his friends, Aleksander Skarlatos and Spencer Stone. Skarlatos was an Oregon National Guardsman on who had just wrapped up a tour in Afghanistan, and Stone, an American Airman 1st Class in the U.S. Air Force. All three were killing time in their seats—listening to music, dozing—when they were jarred alert by gunshots and shattering glass. They saw Ayoub El-Khazzani at the entrance of the train car, gripping an AK-47, pointed at the ceiling.

Skarlatos looked to his friends. “Go,” he said. They charged El-Khazzani and wrested the gun away from him. Stone put him in a chokehold and Skarlatos cracked El-Khazzani on the head with the tip of the gun. After El-Khazzani started to slip out of consciousness, the guys hog-tied him with the help of a fourth passenger, a British businessman named Chris Norman. The next day the trio of friends and Norman were feted in France, while politicians from leading nations around the world celebrated the men as international heroes.

In interviews, the heroes explained their actions. “It all happened so fast,” Sadler said. “We heard the word ‘Go,’ and everyone just got up.” “It wasn’t really a conscious decision,” Skarlatos said. “We just kind of acted. There wasn’t much thinking going on.”

The guys’ actions can be seen as an example of instinctual heroism. At the blink of an eye they put their lives at risk to save a train of strangers. In light of recent studies in neuroscience, their quick actions reframe the century-long debate over altruism.

Altruism asks whether nature or nurture has instilled in us altruistic tendencies and instincts. Beginning with Charles Darwin’s confusion over sterile worker bees that devoted their lives to protecting the queen and caring for the nest, evolutionary biologists including Richard Dawkins have claimed that kin selection, an evolutionary strategy, can explain altruistic behavior. According to this theory, individuals act altruistically only toward their own relatives because kin share genetic codes. Protecting a relative, even at the expense of one’s own life, will help ensure the survival of one’s own DNA.

On the other side of the debate, evolutionary scientists like Peter Kropotkin and psychologists like David Rand have said that altruism has a less selfish tone. Organisms learn over time to act altruistically because they realize it promotes greater utility overall. Kropotkin, for example, noticed large animals unrelated to one another forming herds to stay warm and find food. Individuals like Rand believe organisms, notably humans, act altruistically in everyday life because they learn it benefits them in the long run. For example, if a person every now and then foots the bill for a friend or helps their colleagues with their work during their spare time, they will be perceived as less selfish and in turn receive help from their friends in times of need.

Stephanie Preston, a professor psychology and head of the Ecological Neuroscience Laboratory at the University of Michigan, is reshaping the debate. In recent studies she has put forth a theory for heroism that runs a middle road through nature and nurture. Instinctual altruism or heroism likely came about because at first it benefitted organisms’ offspring, she says. But over time cooperative acts helped rewire organisms’ neural systems to act on behalf of those unrelated to them.

The screams and cries from victims in, say, a burning building or a train car commandeered by a terrorist, could stimulate the same neural mechanisms in bystanders that crying babies stir in parents, Preston says. “Because the mechanism is released by certain cues like those of a helpless, distressed, vulnerable infant, then similar cues in other situations allow this response to be released,” she says. “It’s something that is instinctual under conditions that are very similar to offspring care.”

Preston’s theory of heroism is essentially a homology, or a comparison of the similarities of genes and body structures; in this case, between rats and humans. It begins with research on rats conducted in the 1960s by W. E. Wilsoncroft, who in 1968 published a paper explaining that dams, or post-partum rats, would inexhaustibly retrieve pups upon hearing their cries of distress. Researchers would continuously send rat pups down a shoot into a cage where the dams were resting, and the dams would retrieve the rats from the chutes and bring them back to the nest. None of the rat pups were biologically related to the dams. For three hours, the dams did not stop retrieving the seemingly endless stream of pups, which suggested the tendency for retrieval could be innate.

Preston says the reason why dams didn’t differentiate between their own offspring and those unrelated to them is because rats evolved to live in family groups in dens, where encountering an unrelated pup was unlikely. As a result, the rats didn’t need to develop sophisticated offspring-recognition capabilities to prevent them for caring for non-relatives.

Humans, on the other hand, evolved in larger groups, and did recognize those unrelated to them. As cooperative care benefited the group, Preston explains, it also shaped the evolution of the brain. “Because your ancestors lived in social groups where it benefited them to have cooperative care, then it was sort of built into the [brain] system to be a little looser for who you were willing to care for.”

“Those rewards can be food, drugs of abuse, mates or offspring, and then it’s comforting after you retrieve the pup or a person,” Preston says. This primal reward system may “explain the mystery of doing something immediate and dangerous and not having any rationale or calculating thought about the matter, because it’s a deeply evolved, ingrained response.”

It doesn’t undermine the heroism of the men on the train to say their actions were instinctual. Fear and hesitation are mighty obstacles to overcome, say psychologists. In a terrifying situation, not everybody can tap the impulse to save and protect others. The takeaway from Preston’s research, however, is that we all have the potential to do so.

Watch: The entrepreneur Greg Carr explains why he became a philanthropist.