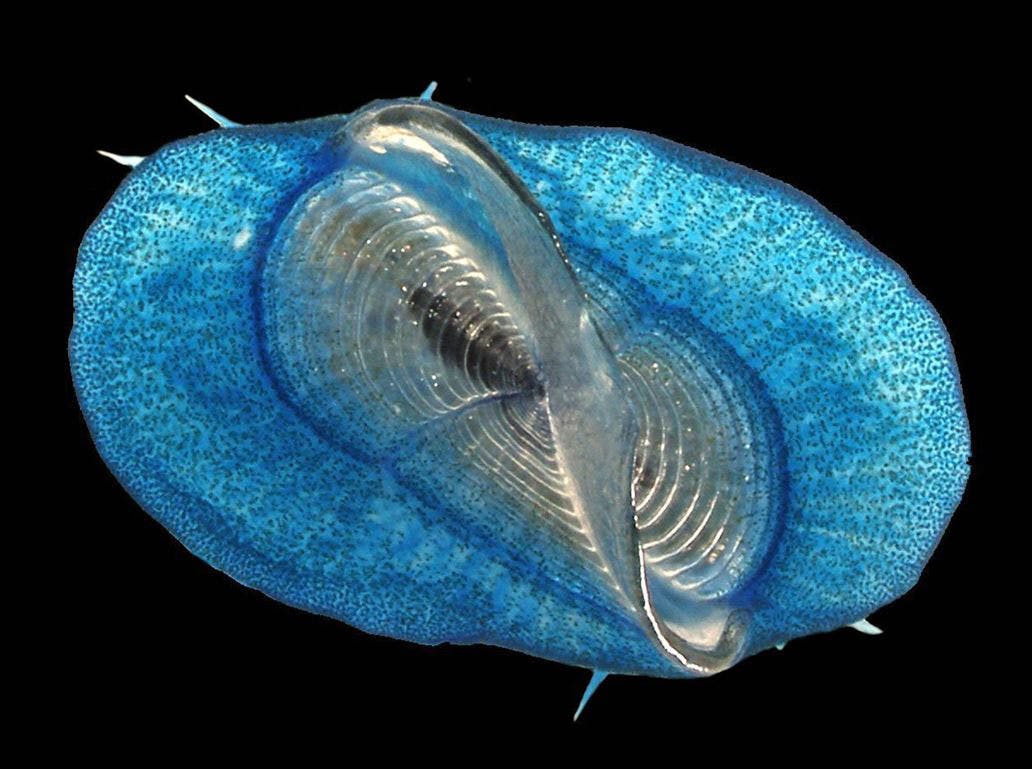 As a marine biologist, one of the weirder creatures I’ve encountered is Velella velella, a type of jelly that looks like a blue sailboat grafted to a feather boa. We don’t know much about Velella: where they live and what they eat; where they go when they’re young and how big they get when they’re old. But we’ve got some ideas, because every year these living sailboats turn beaches around the world bright blue.

Velella are the black sheep of the jelly family. For one, they’re waterproof. A sail made of flexible material called chitin extends from their oval-shaped bodies, twirling them with the wind. The sail is given heft by a plastic-like skeleton and is anchored to a chamber that looks something like the hull of a ship and is filled with gas, which is how they stay afloat. Below deck is a ring of tentacles surrounding a central mouth. When the wind carries Velella near shore, they prey on small fish, eggs, and rice-shaped shrimp-like animals called copepods.

For over 100 years, Velella have remained something of a mystery, washing up on shore one day and gone the next.

When it’s time to reproduce, Velella bud tiny jellyfish from their bodies. These baby jellies, each the size of a sesame seed, sink into deeper water where they mate and give birth to new floating Velella.

You’d think scientists would be clambering all over each other to study a bright blue waterproof sailboat-like creature. But there’s one problem.

We can’t find them.

To learn about their biology, we need to locate them. But in order to locate them, we need to learn about their biology. It’s a frustrating catch-22 for would-be Velella enthusiasts. For over 100 years, Velella have remained something of a mystery, washing up on shore one day and gone the next. And they’re hardly unique in this regard. Much of what transpires at the ocean’s surface remains a mystery.

The surface might seem like the most accessible layer of the ocean, but that doesn’t mean it’s easy to study. The open ocean, where these animals dwell, can be tough to reach and surface forces make for a dynamic environment, with waves concentrating and dispersing floating animals, unlike life in the relatively stable water column just a few feet below.

After World War II, interest in ocean exploration took off, with some scientists is the USSR studying surface waters. (Scientists in the West were more focused on the water column, and didn’t pay as much attention to the surface.) But much of what was learned about the ocean’s surface was forgotten with the collapse of the USSR, and few scientists picked up the charge. Most of what we know dates back to research conducted over 50 years ago. One such scientist, I.A. Savilov, crisscrossed the Pacific from his home port of Vladivostok tens of times to study this ecosystem. Savilov discovered that there are distinct eco-regions at the ocean’s surface, just like there are distinct regions on land. There are tropical ecosystems and temperate ecosystems and mixed zones in between, each with its own wild and colorful community of floating life.

Whole ecosystems float right at the top of the ocean. The highly venomous Portuguese-man-of war; violet snails that make floating rafts out of bubbles wrapped in slime; twinkling blue buttons that sparkle like stars; blue sea dragon sea slugs that hunt blue button and Velella as they crawl on the underside of the ocean’s surface: these are just a few of the species found at the surface. And there are hundreds of species that rely on the surface. Many commercially and ecologically important fish live at the ocean’s surface when they’re young, sheltering in floating algae and debris. Even the ocean’s only true insect species, the sea skaters, live at the surface.

In a study published in early 2021, scientists found that plastic and life are inextricable on the ocean’s surface. Calm surface waters make up just eight percent of the surface around Hawaii, yet nearly 100 percent of surface juvenile fish live in these patches of calm water, and over 95 percent of surface plastic can be found there, too. It turns out our plastic has been polluting an ecosystem most people didn’t even know existed. And we still don’t know how to find many of the animals that live there, like the blue Velella. But we’ve got a hunch.

While Velella haven’t been studied much, ocean plastic has. Floating plastic is concentrated in areas of the ocean called gyres: relatively calm areas at the edge of big currents, where the water moves slowly in swirling patterns. Plastics float to these areas and get trapped, such as in the Great Pacific Garbage Parch and the Sargasso Sea, home of the North Atlantic Garbage Patch. There, golden forests of seaweed create habitat for hundreds of species of fish, juvenile sea turtles, and invertebrates. Are Velella and other ocean surface animals also being carried to these calm waters? To solve this mystery, we’re taking a wild new approach.

I’m working with a NASA-funded group of scientists to find hotspots of ocean surface life, not just by using satellites and sea surface current models and simulations run on giant computers, but by teaming up with ocean-lovers around the world. We are calling on community naturalists, sailors, and beachcombers to help us solve the mysteries of the living sailboats and other surface life. Called the Global Ocean Surface Ecosystem Alliance, or GO-SEA, the group is open to everyone who wants to participate, by simply by going to the sea and telling us what they see. You don’t have to live near a gyre to participate: any region of the ocean is interesting to us.

Finding life at the surface of the ocean isn’t just fun: It turns out Velella and other surface animals really matter in terms of protecting surface ecosystems.

Remember how the inner skeleton of Velella is a lot like plastic? It turns out that so many of the animals that mistakenly eat plastic actually love eating Velella. Sea turtles, albatross, and sunfish all prey on these tiny living boats. If Velella and other surface animals concentrate in the same areas of the open ocean as do plastics—akin to what scientists found around Hawaii—that will have a huge impact on how we attempt to clean up plastic. Roughly a half-dozen companies are now creating devices that autonomously scoop plastic from the ocean’s surface. But if floating ecosystems and floating plastic intermix, this will be like bulldozing a meadow to tidy up after a particularly messy picnic. We will need to find a different way. Studying Velella won’t just help us understand their strange floating world—it will help us add a piece to the ocean conservation puzzle and to protect floating-life hotspots and the creatures that depend on them.