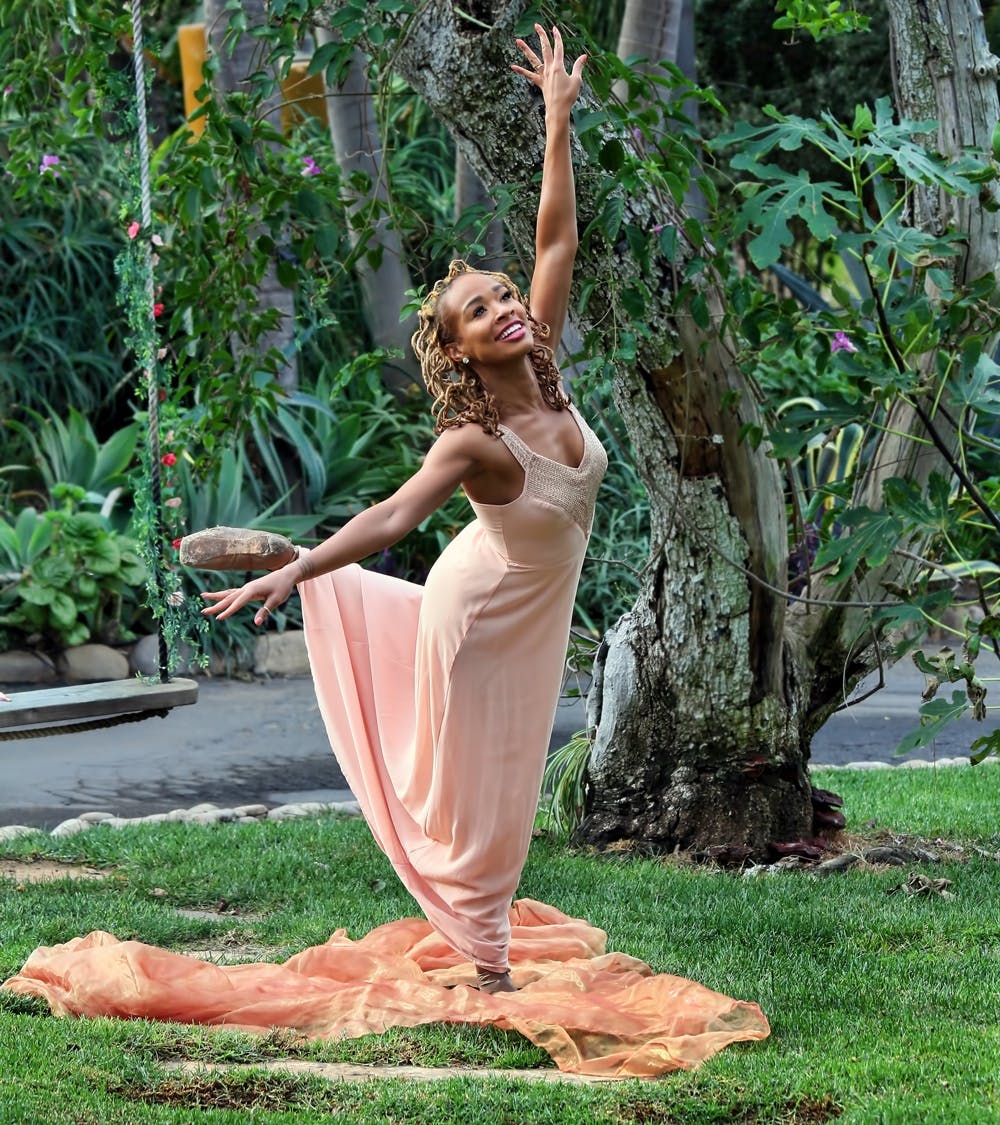 A group of girls gather at a national park in San Diego to learn. They watch an elegant young woman pirouette before them, her arms arced wide. Then she does it again. This time her arms are closer to her body and her turn is faster. But the girls are not here to learn dance. “Let’s look at this technically,” Jasmine Sadler explains. “I turn more slowly when my arms are farther out. Pulling them in, my radius is shorter and I can turn faster. This is called angular velocity.” The girls are learning science.

“Whatever you think a ‘scientist’ looks like in your head,” Sadler tells them, “picture me. I’m a scientist and you can be, too.” Sadler is a dancer, an engineer, and a rocket scientist. Her day job is founder and CEO of the STEAM Collaborative, through which she convenes workshops and provides technical expertise for a wide variety of STEM (science, technology, engineering, and math) and STEAM (science, technology, engineering, art, and math) programs. Sadler is dedicated to helping young people of color, especially girls, see themselves in roles they may not have previously imagined for themselves, and she helps give them the tools they need to achieve their dreams.

Have art and science been twin tracks for you?

They just go together for me. I don’t separate them. I’m originally from Detroit, and both of my parents were computer specialists for the government. From an early age I danced—tap and hip hop, but ballet is still my favorite. In eighth grade I began tutoring some of my fellow students in algebra. The teacher would give us a concept, and I would reteach it. I’d say, “this is one way to understand this, and here is another way.” I participated in the Detroit Area Pre-College Engineering Program and started coding and designing a website in high school. At the same time, I was always dancing. To solve problems effectively, you need to activate both sides of the brain. And dance is full of joy.

Before launching full time as a social entrepreneur, you worked for 10 years as an aerospace engineer.

I graduated from the University of Michigan with a degree in aerospace engineering in 2009. I chose the specialty in response to the 2003 Columbia space shuttle disaster. I thought, no one should experience tragedy doing the coolest job “out of this world.” I wanted to make sure it never happened again. One of the main reasons to go into engineering is that it’s a direct pathway to helping people.

The arts can help you approach the science.

My career as an aerospace engineer is all related to turning air into energy by improving aircraft engines, wind turbines, or oil/gas turbines. As a test engineer, I led teams of men, most of them twice my age, in manufacturing. When there was an issue with the equipment or with a test, my job was to guide them to a solution.

Our business was in selling oil and gas turbines, and we had to test them before the final sale. (A turbine is a type of engine that produces power by revolving a moving flow of air, gas, or other fluid.) Sometimes the vibrations made by the turbines were too much, and we had to shut them down. Sometimes my team would have to contact me in the middle of the night. Using software on my laptop, I could recommend where to counterbalance the weight and by how much, to keep the vibration within set limits. I would press “print” from my bed directly to the test cell. I’d bring in donuts the next day, to reward everyone for installing a new solution.

What projects have you taken on at the STEAM Collaborative?

My company began as a math-tutoring service to prepare children of color to be the smartest students in class. Educators began to request that I spend more time in the classroom, telling the students about my path and doing hands-on workshops. One example is a STEM program for high school boys. Football players came to our session in their uniforms. I asked them, “What is a problem you would like to help your community solve?” and they settled on alcohol, cigarette, and drug use in their high school. They decided to build an app to help make counseling available to students without their parents finding out, which also allowed them to stay cool and popular—the issues are around mental health and self-worth.

This is an example of a problem requiring both art and math. The boys not only created the app, they also made a pitch deck to market it. I asked them: “How many people do you expect to download your app?” I had them use San Diego census data to get actual numbers in their target age group, 18-24. They had to calculate the percentage of the population targeted by the app—now I’m teaching them conversions ,and that’s math. The product is all about numbers, what your financials are—that’s a linear line. At the same time, the pitch deck has to look nice, it has to be designed well from an artistic perspective.

Did you learn about financial systems as an engineer?

I also have an MBA.

You left engineering fairly recently to concentrate on your nonprofit work.  Why?

I became dissatisfied with my job because I felt it wasn’t making me a better engineer. I was becoming better adapted to being an engineer, being part of the culture of engineering. I was learning how to get along in a world filled with white men. They weren’t charged with learning my culture, but I had to embody theirs if I was to have any chance of success in the system. Ultimately I didn’t think that was where I should focus my energy. I realized that I need to make it more normal for girls and people of color to be engineers, because when their numbers are greater in the profession, it will become inherently more inclusive.

You not only work directly with students, you also convene leaders in STEM and STEAM.

In 2017 I received a Social Innovation Challenge grant. I intended to create a STEAM camp for middle school students in San Diego, and attended many of the camps already going on, to document lessons learned. My notes included: Pay attention to the homeless student population—these are students who need three meals a day. In some cases there was no actual art integrated into the program even though it was called STEAM. Especially when I’m working with girls, I make physics more relatable by having them dance. One example is to have them time each other dancing down a runway, then divide the distance by time to calculate speed.

Since there were a lot of STEAM camps already going on, I revised my idea and thought: Why not help support the leaders to do better STEAM? So I brought regional STEAM leaders together at Point Loma Nazarene University (where I got my MBA). The focus was on addressing inefficiencies in their own camps and programs. I brought together 20 STEAM leaders, including the head of a robotics club. It included a leader from Jack and Jill of America, which is a nationwide membership organization focused on African-American mothers with children ages 2-19, focused on developing leadership. Each program leader was reaching at least 20 students each, so I realized this was a way to truly amplify impact. I’ve put on three STEAM Leader Summits now. The first event became the cornerstone of the STEAM Collaborative.

To solve problems effectively, you need to activate both sides of the brain.

What words of wisdom do you have for students of color about pursuing STEM and STEAM careers?

There’s no doubt it’s really hard to be the only woman engineer on a job, the only African-American. It’s isolating, but you have to keep yourself focused on overall goals. The hard part about engineering is not the engineering itself—it’s the largely white, largely male culture. The only way for us to change that is to get more people of color and more women into engineering. Engineering is one of the few professional avenues where a bachelor’s degree is sufficient—you don’t need to get a master’s. I tell college students who are becoming engineers, this isn’t about you any more, it’s about helping the community. Once you start the engineering program, finish it. If I hadn’t received my degree, I wouldn’t be in a position to show others that they can do it, too. The only way I can help girls become rocket scientists is to be one myself. It’s all about identity, and modeling possibilities.

Any further thoughts on creative problem-solving?

Even if students decide not to pursue a career in STEM, I fully encourage them to master science, technology, engineering, and math. These all provide different ways to solve a problem. I also encourage them to add the arts to their experience, because art also enhances problem-solving—it’s creative. The arts can help you approach the science. I’ve noticed the girls I’ve been working with are visual learners. They’re good at graphing, rotating things, moving things, drawing things. They aren’t as strong with word problems, or with straight multiplication. So the challenge is to translate those formats into concepts they can grasp more easily. At the same time, I emphasize that they have to learn the vocabulary of science because that’s largely how it’s communicated.

Personally, I target students who identify as female and African-American because there are problems in their communities that may never find solutions if they don’t create them. Once they learn more about STEM and STEAM opportunities, they can begin to innovate, invent, and patent solutions.

This article was produced with the support of the Lyda Hill Philanthropies IF/THEN initiative and the American Geosciences Institute.