Earth’s climate has fluctuated through deep time, pushed by these 10 different causes. Here’s how each compares with modern climate change. 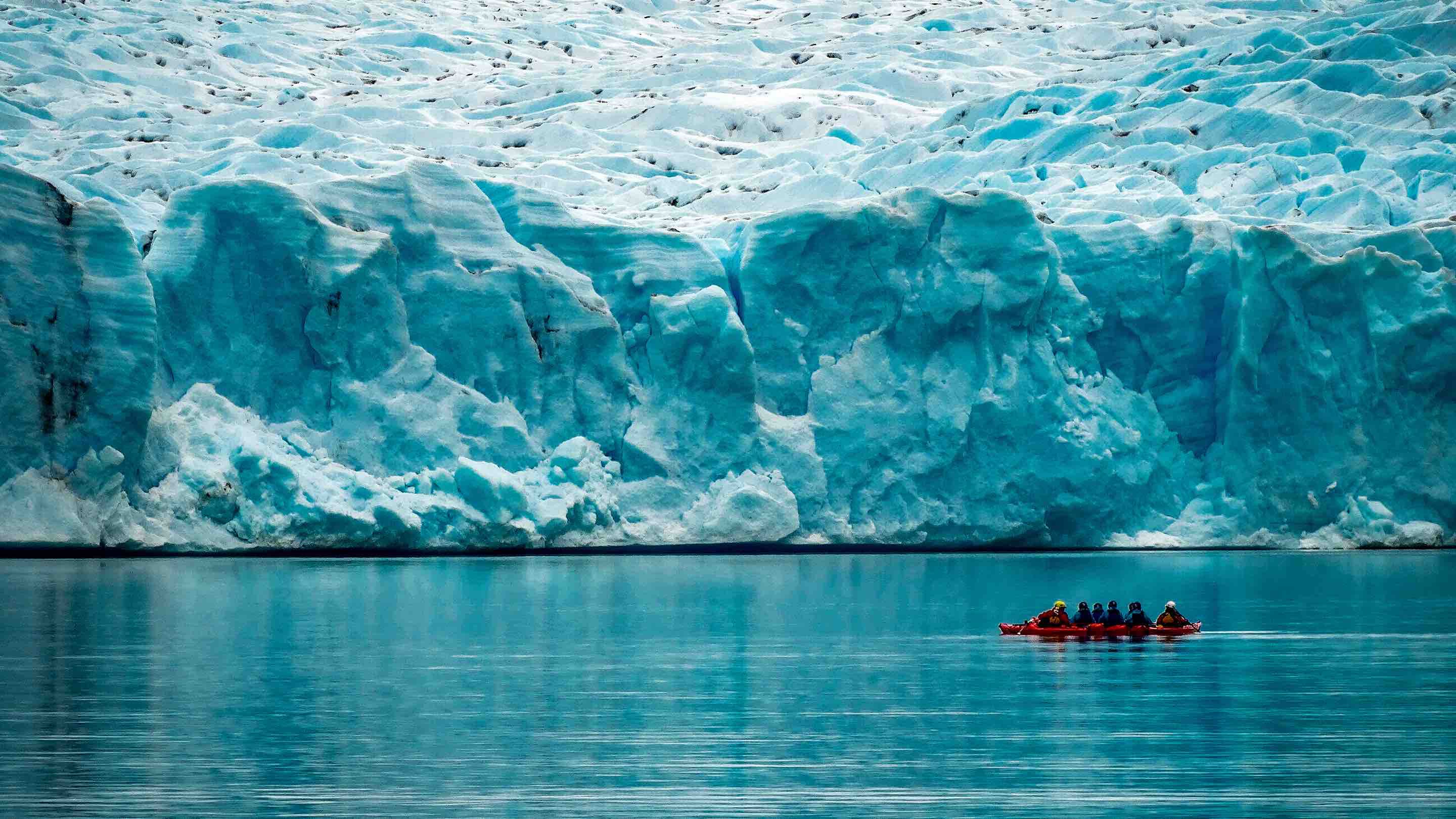 Earth has been a snowball and a hothouse at different times in its past. So if the climate changed before humans, how can we be sure we’re responsible for the dramatic warming that’s happening today?

In part it’s because we can clearly show the causal link between carbon dioxide emissions from human activity and the 1.28 degree Celsius (and rising) global temperature increase since preindustrial times. Carbon dioxide molecules absorb infrared radiation, so with more of them in the atmosphere, they trap more of the heat radiating off the planet’s surface below.

But paleoclimatologists have also made great strides in understanding the processes that drove climate change in Earth’s past. Here’s a primer on 10 ways climate varies naturally, and how each compares with what’s happening now.

Magnitude: 0.1 to 0.3 degrees Celsius of cooling

Every 11 years, the sun’s magnetic field flips, driving an 11-year cycle of solar brightening and dimming. But the variation is small and has a negligible impact on Earth’s climate.

More significant are “grand solar minima,” decades-long periods of reduced solar activity that have occurred 25 times in the last 11,000 years. A recent example, the Maunder minimum, which occurred between 1645 and 1715, saw solar energy drop by 0.04% to 0.08% below the modern average. Scientists long thought the Maunder minimum might have caused the “Little Ice Age,” a cool period from the 15th to the 19th century; they’ve since shown it was too small and occurred at the wrong time to explain the cooling, which probably had more to do with volcanic activity.

The sun has been dimming slightly for the last half-century while the Earth heats up, so global warming cannot be blamed on the sun.

In the year 539 or 540 A.D., the Ilopango volcano in El Salvador exploded so violently that its eruption plume reached high into the stratosphere. Cold summers, drought, famine and plague devastated societies around the world.

Eruptions like Ilopango’s inject the stratosphere with reflective droplets of sulfuric acid that screen sunlight, cooling the climate. Sea ice can increase as a result, reflecting more sunlight back to space and thereby amplifying and prolonging the global cooling.

Ilopango triggered a roughly 2 degree Celsius drop that lasted 20 years. More recently, the eruption of Pinatubo in the Philippines in 1991 cooled the global climate by 0.6 degrees Celsius for 15 months.

Volcanic sulfur in the stratosphere can be disruptive, but in the grand scale of Earth’s history it’s tiny and temporary.

Magnitude: Up to 0.15 degrees Celsius

On top of seasonal weather patterns, there are other short-term cycles that affect rainfall and temperature. The most significant, the El Niño–Southern Oscillation, involves circulation changes in the tropical Pacific Ocean on a time frame of two to seven years that strongly influence rainfall in North America. The North Atlantic Oscillation and the Indian Ocean Dipole also produce strong regional effects. Both of these interact with the El Niño–Southern Oscillation.

The interconnections between these cycles used to make it hard to show that human-caused climate change was statistically significant and not just another lurch of natural variability. But anthropogenic climate change has since gone well beyond natural variability in weather and seasonal temperatures. The U.S. National Climate Assessment in 2017 concluded that there’s “no convincing evidence for natural cycles in the observational record that could explain the observed changes in climate.”

Earth’s orbit wobbles as the sun, the moon and other planets change their relative positions. These cyclical wobbles, called Milankovitch cycles, cause the amount of sunlight to vary at middle latitudes by up to 25% and cause the climate to oscillate. These cycles have operated throughout time, yielding the alternating layers of sediment you see in cliffs and road cuts.

During the Pleistocene epoch, which ended about 11,700 years ago, Milankovitch cycles sent the planet in and out of ice ages. When Earth’s orbit made northern summers warmer than average, vast ice sheets across North America, Europe and Asia melted; when the orbit cooled northern summers, those ice sheets grew again. Since warmer oceans dissolve less carbon dioxide, atmospheric carbon dioxide levels rose and fell in concert with these orbital wobbles, amplifying their effects.

Today Earth is approaching another minimum of northern sunlight, so without human carbon dioxide emissions we would be heading into another ice age within the next 1,500 years or so.

Though the sun’s brightness fluctuates on shorter timescales, it brightens overall by 0.009% per million years, and it has brightened by 48% since the birth of the solar system 4.5 billion years ago.

Scientists reason that the faintness of the young sun should have meant that Earth remained frozen solid for the first half of its existence. But, paradoxically, geologists have found 3.4-billion-year-old rocks that formed in wave-agitated water. Earth’s unexpectedly warm early climate is probably explained by some combination of less land erosion, clearer skies, a shorter day and a peculiar atmospheric composition before Earth had an oxygen-rich atmosphere.

Clement conditions in the second half of Earth’s existence, despite a brightening sun, do not create a paradox: Earth’s weathering thermostat counteracts the effects of the extra sunlight, stabilizing Earth’s temperature (see next section).

Carbon Dioxide and the Weathering Thermostat

The main control knob for Earth’s climate through deep time has been the level of carbon dioxide in the atmosphere, since carbon dioxide is a long-lasting greenhouse gas that blocks heat that tries to rise off the planet.

Volcanoes, metamorphic rocks and the oxidization of carbon in eroded sediments all emit carbon dioxide into the sky, while chemical reactions with silicate minerals remove carbon dioxide and bury it as limestone. The balance between these processes works as a thermostat, because when the climate warms, chemical reactions become more efficient at removing carbon dioxide, putting a brake on the warming. When the climate cools, reactions become less efficient, easing the cooling. Consequently, over the very long term, Earth’s climate has remained relatively stable, providing a habitable environment. In particular, average carbon dioxide levels have declined steadily in response to solar brightening.

However, the weathering thermostat takes hundreds of thousands of years to react to changes in atmospheric carbon dioxide. Earth’s oceans can act somewhat faster to absorb and remove excess carbon, but even that takes millennia and can be overwhelmed, leading to ocean acidification. Each year, the burning of fossil fuels emits about 100 times more carbon dioxide than volcanoes emit—too much too fast for oceans and weathering to neutralize it, which is why our climate is warming and our oceans are acidifying.

Magnitude: Roughly 30 degrees Celsius over the past 500 million years

The rearrangement of land masses on Earth’s crust can slowly shift the weathering thermostat to a new setting.

The planet has generally been cooling for the last 50 million years or so, as plate tectonic collisions thrust up chemically reactive rock like basalt and volcanic ash in the warm, wet tropics, increasing the rate of reactions that draw carbon dioxide from the sky. Additionally, over the last 20 million years, the building of the Himalayas, Andes, Alps and other mountains has more than doubled erosion rates, boosting weathering. Another contributor to the cooling trend was the drifting apart of South America and Tasmania from Antarctica 35.7 million years ago, which initiated a new ocean current around Antarctica. This invigorated ocean circulation and carbon dioxide–consuming plankton; Antarctica’s ice sheets subsequently grew substantially.

Earlier, in the Jurassic and Cretaceous periods, dinosaurs roamed Antarctica because enhanced volcanic activity, in the absence of those mountain chains, sustained carbon dioxide levels around 1,000 parts per million, compared to 415 ppm today. The average temperature of this ice-free world was 5 to 9 degrees Celsius warmer than now, and sea levels were around 250 feet higher.

The Earth Impact Database recognizes 190 craters with confirmed impact on Earth so far. None had any discernable effect on Earth’s climate except for the Chicxulub impact, which vaporized part of Mexico 66 million years ago, killing off the dinosaurs. Computer modeling suggests that Chicxulub blasted enough dust and sulfur into the upper atmosphere to dim sunlight and cool Earth by more than 20 degrees Celsius, while also acidifying the oceans. The planet took centuries to return to its pre-impact temperature, only to warm by a further 5 degrees Celsius, due to carbon dioxide in the atmosphere from vaporized Mexican limestone.

How or whether volcanic activity in India around the same time as the impact exacerbated the climate change and mass extinction remains controversial.

Occasionally, the evolution of new kinds of life has reset Earth’s thermostat. Photosynthetic cyanobacteria that arose some 3 billion years ago, for instance, began terraforming the planet by emitting oxygen. As they proliferated, oxygen eventually rose in the atmosphere 2.4 billion years ago, while methane and carbon dioxide levels plummeted. This plunged Earth into a series of “snowball” climates for 200 million years. The evolution of ocean life larger than microbes initiated another series of snowball climates 717 million years ago—in this case, it was because the organisms began raining detritus into the deep ocean, exporting carbon from the atmosphere into the abyss and ultimately burying it.

When the earliest land plants evolved about 230 million years later in the Ordovician period, they began forming the terrestrial biosphere, burying carbon on continents and extracting land nutrients that washed into the oceans, boosting life there, too. These changes probably triggered the ice age that began about 445 million years ago. Later, in the Devonian period, the evolution of trees further reduced carbon dioxide and temperatures, conspiring with mountain building to usher in the Paleozoic ice age.

Magnitude: Around 3 to 9 degrees Celsius of warming

Continent-scale floods of lava and underground magma called large igneous provinces have ushered in many of Earth’s mass extinctions. These igneous events unleashed an arsenal of killers (including acid rain, acid fog, mercury poisoning and destruction of the ozone layer), while also warming the planet by dumping huge quantities of methane and carbon dioxide into the atmosphere more quickly than the weathering thermostat could handle.

In the end-Permian event 252 million years ago, which wiped out 81% of marine species, underground magma ignited Siberian coal, drove up atmospheric carbon dioxide to 8,000 parts per million and raised the temperature by between 5 and 9 degrees Celsius. The more minor Paleocene-Eocene Thermal Maximum event 56 million years ago cooked methane in North Atlantic oil deposits and funneled it into the sky, warming the planet by 5 degrees Celsius and acidifying the ocean; alligators and palms subsequently thrived on Arctic shores. Similar releases of fossil carbon deposits happened in the end-Triassic and the early Jurassic; global warming, ocean dead zones and ocean acidification resulted.

If any of that sounds familiar, it’s because human activity is causing the same effects today.

Lead image: Orbital wobbles, plate tectonics, evolutionary changes and other factors have sent the planet in and out of ice ages. Credit: Pablo A. Cumillaf