How It Feels to Surf the World’s Biggest Wave 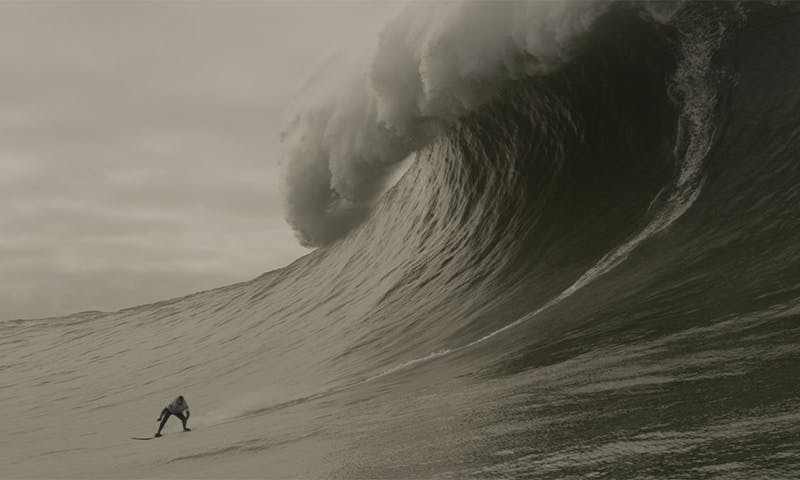 When you first see the leviathan arch of the world’s biggest wave tower over the cliffs of Nazaré, Portugal, its crown of angry froth exploding onto itself, you might wonder if it isn’t the tongue of God come to swallow the Earth.

Surging vertically to a height of up to 100 feet just behind an ancient lighthouse, the wave has all the menace of a massive tsunami, but unlike a tsunami, it can be surfed. When conditions at Nazaré are right, in the months between October and March, modern-day Prometheans zipper down the black well of the wave’s face, chasing the violent edge of the crest’s shadow, hurtling desperately toward the light. For big wave surfers, it’s the ride of their lives.

“The amount of speed you get going down those waves is incredible,” says Maya Gabeira of Brazil. (About 45 miles per hour.) “The water is changing under your feet as you’re going down. You have to navigate, do jumps, a lot of adjusting. It’s very instinctive and very, very intense. On the really big waves, there’s a noise that’s indescribable. When the lip of the wave breaks and it hits the bottom, it’s like an explosion. It’s like a bomb.” At Nazaré, Gabeira has broken the world record for the biggest wave ever surfed by a woman: 73.5 feet.

Nazaré is like no other wave on the planet. Since 2011, when it was discovered by the big-wave surfing community, it has become a mecca for surfers seeking to test their nerve, skill, and luck on the ocean’s version of Mt. Everest. Massive surfable waves 70 to 80 feet high form in just a handful of spots around the world, such as Mavericks in California and Jaws in Maui. In each case, a dramatic rise in the sea floor close to the coast concentrates swell energy, thrusting the water upward into a monstrous crest that breaks as it rolls toward the shore. But Nazaré consistently produces the biggest waves in the world—five of the six biggest waves ever surfed were at Nazaré, including the Guinness World Record of 80 feet.

Three major forces combine to make Nazaré such a monster wave machine, says Falk Feddersen, a professor of physical oceanography at Scripps Institution of Oceanography and a surfer himself. “Massive storms that cruise by Greenland and Iceland—their wind energy is pointed directly at Portugal,” Feddersen says. The Portuguese coast gets twice as much storm swell as, say, the United States East Coast. These storm swells off Portugal are then magnified by two major geological features that converge at the Nazaré cliff: the biggest and most dramatic underwater canyon in Europe, deeper in places than the Grand Canyon, and a huge headland that juts into the sea.

“When the lip of the wave breaks and it hits the bottom, it’s like an explosion. It’s like a bomb.”

When Nazaré reaches its most dramatic heights, it is typically the result of two waves converging and amplifying one another—up to five times their natural size in deep offshore water. A 15-foot swell at sea can result in a 75-foot wave near the shore. The effect is produced primarily by the submarine canyon, which narrows as it approaches the coastline. Winter storms drive water into the canyon, which extends 16,000 feet below the surface of the ocean and stretches 140 miles along the continental shelf into the sea. Storm swells build as the sea floor grows shallower, and when a wave hits the canyon walls at the right angle, it refracts back into the part of the swell that does not run through the canyon, sending a volcano of water skyward and producing the massive tongue shaped peak. A powerful current that runs north along the shore also acts as a barrier to the swell, which further amplifies the wave. Then there is the headland, which juts into the sea and refracts wave energy on either side of it, amplifying the wave even more, though to a much lesser degree than the canyon.

“If you take a magnifying glass and put it at the right height, you can set a dry leaf on fire,” Feddersen says. Similarly, underwater canyons focus all of the wave energy into one place. In fact, the equations used to determine how intensely sunlight would be focused by a magnifying glass are the same equations used to determine how a canyon would focus wave energy, he says.

The height of the wave, and where it breaks, depend on many factors, including which direction the storm swells are coming from, the energy in those swells and the distance and time between one wave and the next. Wave heights are most amplified when swells come from the west/northwest and are “long-period,” meaning they feature longer time periods of 15 seconds or more between waves. These long-period swells are produced by strong prolonged storms and accumulate more energy as they move through the ocean, travel faster, and break with more kick. The record-breaking giant that Gabeira surfed in 2020 at Nazaré was most likely generated by a storm that roared to life somewhere between Greenland and Newfoundland a few days earlier.

A 15-foot swell at sea can result in a 75-foot wave near the shore.

Many big wave surfers, including Gabeira, live or winter in Nazaré so that they won’t miss a single wave. It’s difficult to know exactly what to expect in advance. Wave forecasting is a difficult art—forecasts of wave height are often off by as much as 50 percent. “It’s one thing to measure waves when they’re storming in 25-foot seas. It’s another to measure them when they’re in 50-foot or 100-foot seas,” Feddersen says. Big wave forecasting is even more difficult because of the number of variables involved—subtle differences in swell direction and tidal phase can have a huge impact on wave amplification at Nazaré. But forecasts are getting more precise as the data inputs multiply and modeling technologies get more powerful. Forecasters used to rely exclusively on satellite data, ship and buoy observations, and maps of the seafloor. In recent years, supercomputers and artificial intelligence technologies such as machine learning have allowed them to include inputs from currents, sea ice, and weather models, as well as surf cameras and even social media accounts. Scientists are also getting better at collecting data from inside severe storms.

The future could bring even bigger waves to Nazaré and other big wave locations around the world, as climate change sets off more severe storm events. How big? It’s hard to say. The energy in a wave is the square of the wave height, as a rule of thumb. A storm that is twice as powerful would produce a wave that is 50 percent bigger. Storms, and therefore waves, will also be more unpredictable.

Nazaré can already be unpredictable—it can break almost anywhere, which means that, unlike most other big waves, there is no channel or safe zone to which a surfer can escape if things go awry. In 2013, on her debut ride, Gabeira nearly drowned after she wiped out, lost her life jacket, and was knocked unconscious under an avalanche of exploding white water. It took four years and three spinal surgeries before she could return. Doctors and her surf idols Kelly Slater and Laird Hamilton told Gabeira to quit. Of course, she didn’t quit. (Her story is the subject of a new documentary, Maya and the Wave, which won acclaim at the Toronto International Film Festival in September and screens at Doc NYC on Nov. 9.)

Fear is always present at Nazaré, Gabeira admits, but “fear is very important because it will protect your life,” she says. “The only way to deal with the fear is knowing that I’ve done my training and that I’m prepared, that I know different scenarios I can encounter, and that I have an instinctive response to problems that might occur. That makes me more relaxed and makes me able to focus on my performance.”

Focus on a 70-foot wave is everything. “I’m very present at the moment, I’m completely focused,” Gabeira says. “There’s a lot of information to absorb with the wind, the waves, the people around, the jet skis going by. It’s one of those things that makes you very present and it’s a wonderful feeling.” But the biggest thrill for Gabeira is the moment when she reaches the bottom. “When you get to the bottom of the wave, you’re reaching the peak of speed,” she says “For me that’s the most exciting.” You hear the explosive power of the wave breaking all around you, but you have already triumphed—over the wave, over the phenomenal power of the ocean, over your own wild and ferocious heart.

Lead photo: Maya Gabeira surfing at Nazare, from the film, Maya and the Wave. Courtesy of Stephanie Johnes.