The simple insight that most changes are random had a profound effect on genetics, evolution and ecology. 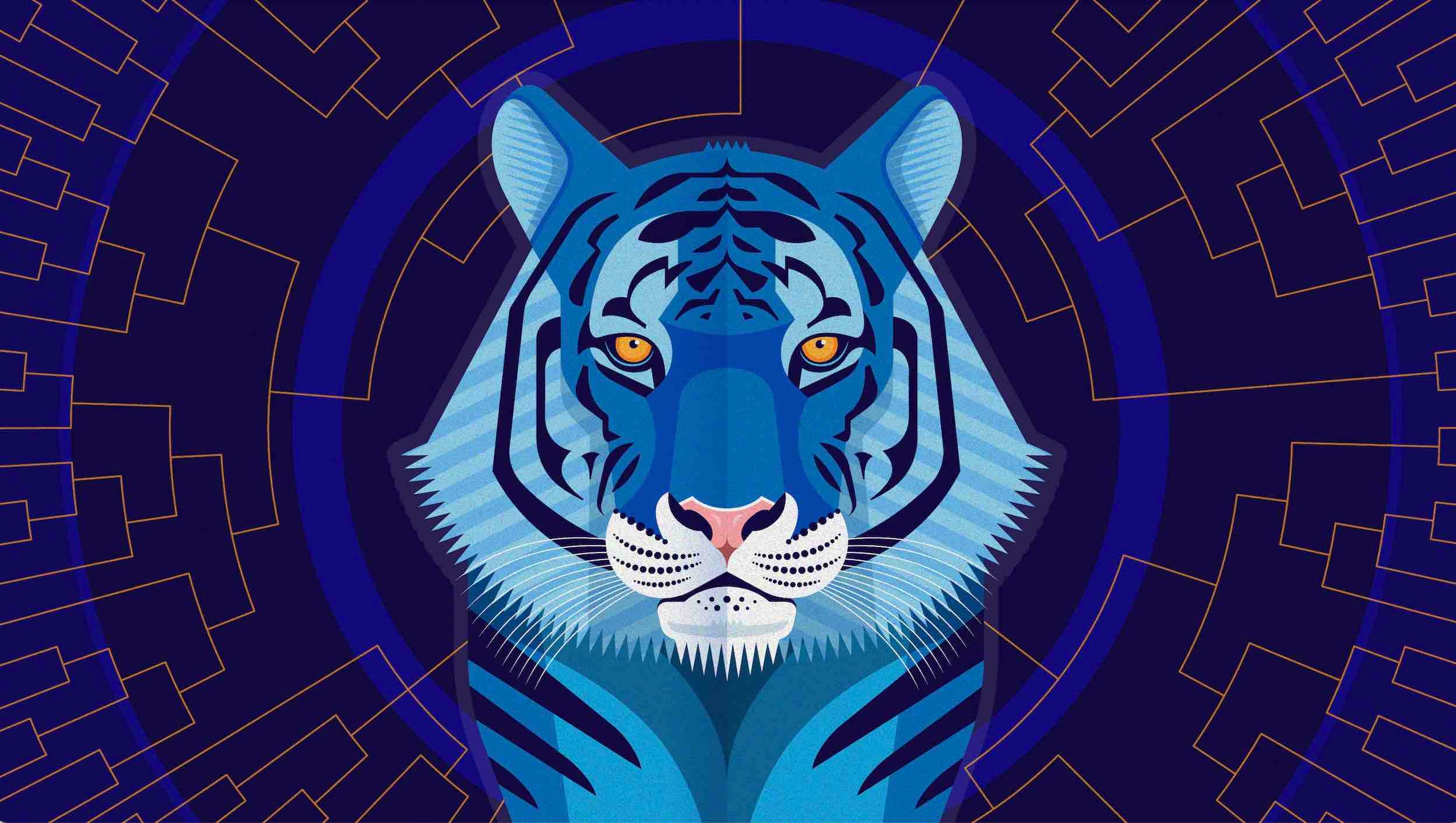 If you had braved the jungles of China’s Fujian province in the early 20th century, various accounts say you could have witnessed a stunningly unexpected animal: a blue tiger. These tigers were described as “marvelously beautiful” with bodies “a deep shade of Maltese, changing into almost deep blue on the under parts.” As late as the 1950s, hunters reported spotting their blue hairs alongside the traditional orange fur of other South China tigers on trails.

Then the blue tigers disappeared. The last reported sighting was in 1953, and blue tigers were soon the stuff of legends, with not so much as a preserved hide to prove they ever existed.

It is tempting to think the cats’ blueness was tied to some flaw that left them unable to compete with their bright orange kin. But it’s more likely their bizarre coats had nothing to do with their extinction; it was simply bad luck that the color arose in a small population that continued to shrink.

This kind of chance evolution is the purview of neutral theory, the historically controversial idea that “survival of the fittest” isn’t the only, or even the most common, way that species change, split or disappear. Simple as the proposition sounds, its consequences for genetics, evolution, ecology and even disciplines outside of biology have been sweeping.

Not So Neutral Theory

The random rise or fall of gene variants in a population is known as genetic drift. Today it’s accepted as a key driver of evolution and diversity, but that wasn’t always the case. Until the 1960s, biologists generally ascribed all variation to selective forces: Deleterious traits hampered an individual’s reproduction, ensuring that over time, the traits would disappear (negative or purifying selection). Conversely, helpful traits bolstered the number of offspring an individual had and raised their own prevalence (positive selection)—all as predicted by Charles Darwin and Alfred Russel Wallace’s principle of natural selection.

Then sequencing studies on proteins revealed much more genetic variation within populations than expected. The idea that selection was acting on all those genes at once, weighing their effects and picking which ones should stay or go, didn’t sit right with some scientists.

In 1968, the renowned geneticist Motoo Kimura proposed an alternative explanation, now called neutral theory. Kimura posited that most of the variation between organisms is neither advantageous nor disadvantageous. Consequently, most of the variety we see isn’t a product of the hidden hand of selection but rather of luck. “All you need is some input of variation, and random forces will do the rest,” said Armand Leroi, an evolutionary biologist at Imperial College London.

Kimura’s neutral theory of molecular evolution sparked debate because it seemed to water down the influence of selection. But the genomics revolution of the late 20th century and widespread DNA sequencing confirmed that Kimura was right; swapping out one letter for another in a gene’s code usually has little effect.

Ever since, neutral theory has been the default assumption (or null hypothesis) in genetics. “If you want to show that a given variant in a DNA sequence is under selection, you first have to really show that it can’t be just explained by neutrality,” Leroi said.

Some continue to fight the idea that neutral forces drive diversity at the molecular level, but Parul Johri, a population geneticist at Arizona State University, largely chalks that up to a misunderstanding of its role in evolution. “Kimura never said everything is neutral,” she said. What matters is how much neutral forces have shaped biodiversity. And that depends largely on the size of the group you’re looking at.

Imagine a population of 10 birds: one red, one green and all the rest brown. These colors aren’t harmful or helpful, so all the birds have the same chance of reproducing. Then a tornado kills six of the brown birds, purely by chance. Now half the population is brown, a quarter is red and a quarter is green. A random event caused a major shift in diversity. That’s genetic drift.

If there had been 98 brown birds and the same lone red and green ones, however, the catastrophe wouldn’t have mattered as much. Even if the tornado still killed 60% of the population, all of them brown, 38 brown birds would have made it along with the colorful ones, resulting in a population that’s still 95% brown. “The smaller the population size, the larger the drift,” Johri said.

Part of the appeal of neutral theory is that it’s mathematically straightforward. “A lot of the theory was easy,” Johri explained, since essentially “it’s all just probability.” That allowed geneticists for the first time to look back into history: By assuming that genetic changes were neutral, scientists could calculate the size of a population in the past or determine the age of a group’s last common ancestor.

But for such inferences to be accurate, scientists need to combine neutral theory with the effects of selection. That’s been a problem since the late 1970s, Johri noted, because the math hasn’t really changed since the flurry of work after Kimura’s proposal, despite a glut of new data. “The mathematical framework—it needs to keep evolving,” she said.

That’s exactly what she and her colleagues aimed to do in a paper in Genetics in May of 2020. They proposed a new statistical framework that incorporated both neutral theory and purifying selection, putting the math closer to matching reality.

Seeing the Neutral Forest for the Trees

While neutral theory has mostly come to be accepted in population genetics, it continues to incite controversy in other fields—notably ecology. In traditional ecology, species are seen as occupying unique niches where they can thrive better than any other species; the more niches there are, the more species there can be. “Mathematically, it’s exactly the same argument the population geneticists were using” about gene variants, Leroi said.

So Stephen Hubbell of the University of California, Los Angeles, adapted Kimura’s framework to ecology. In Hubbell’s 2001 book, The Unified Neutral Theory of Biodiversity and Biogeography, he argued that many species can occupy any given niche, and whether they hold it is ultimately driven by chance. Whole ecosystems evolve through random “ecological drift,” much as genetic drift influenced the frequency of traits.

That may sound un-Darwinian—and many biologists do consider it provocative. But neutral theorists take the position that, to an individual organism, the species of its competitors don’t matter: A robin competes with other robins for worms as much as it does with blackbirds, and every tree in a forest vies with the rest for sunlight. As a result, random events can rule over which species persist.

In studies, this neutral theory has generally not been very successful at predicting the composition of ecosystems, but many ecologists continue to find it useful as a null hypothesis for sharpening their analyses of niche-based diversity models. And many consider the idea as one end of a spectrum, since both selective and neutral forces are always at work.

From Genes to Baby Names

The spread of neutral theory didn’t stop at ecology. It has been used to explain diversity in everything from cryptocurrencies to baby names, according to Leroi, because it’s a “very elegant” framework for understanding how variations can rise and fall even in the absence of functional differences between them.

But neutral forces also sometimes get more credit than they deserve. In a May 2020 paper in Nature Human Behaviour, Leroi and his colleagues described what they called “neutral syndrome”: the tendency to reject selective forces as explanations simply because a pattern in variation could be explained by neutrality. To truly tell how important neutral forces are, better tests for distinguishing their effects from selection are needed, the researchers argued. “My gut feeling is that when we have such tests, we will discover for culture and certainly for trees in the Amazon that, actually, neutral forces aren’t that important,” Leroi said.

He doesn’t totally rain on neutral theory’s parade, though. “Although I’ve complained about it being expanded willy-nilly to other things, it’s also a good thing,” he acknowledged, since it could generate novel insights in fields like economics.

Whether we like to admit it or not, random forces are always subtly influencing the world. Neutral theory provides a framework for making these forces known and measurable. Leroi believes it should continue to expand its influence “until it becomes an integral part of explaining diversity wherever we see it in the world, be it in the supermarket or a tropical rainforest.”

Lead image: A blue tiger may have roamed parts of China a century ago. Its extinction may have less to do with natural selection than with real world randomness. Credit: Samuel Velasco/Quanta Magazine